Seb Bouin has just climbed his long-standing project on the Ramirole Sector in the Verdon Gorge, France and suggests F9c! 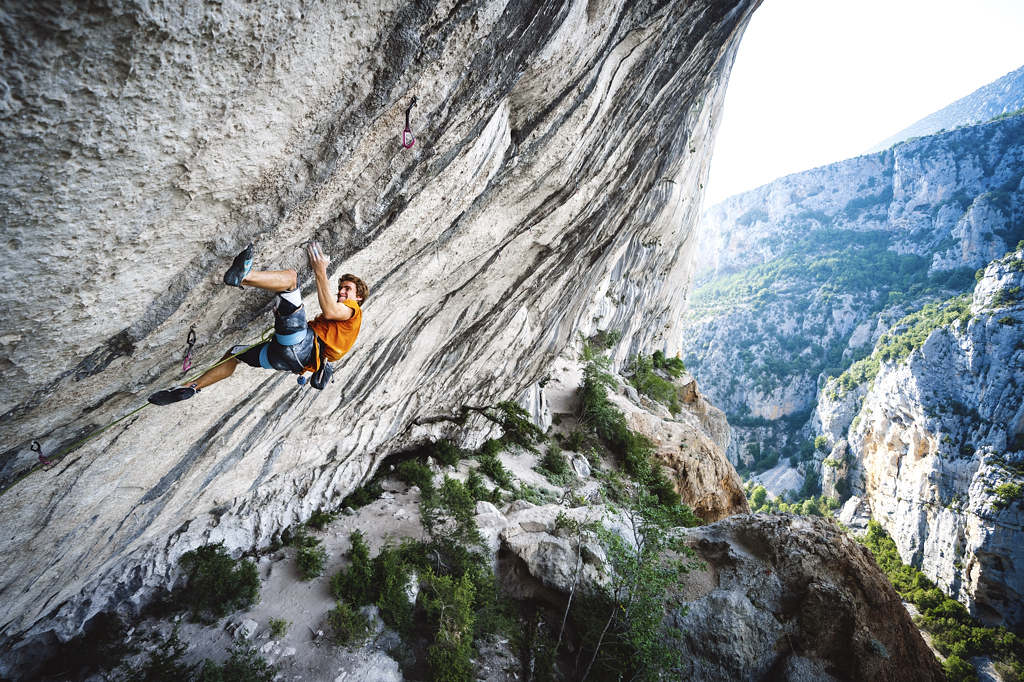 As we reported at the time, Seb Bouin had a blazing year in 2019 before the pandemic hit. Amongst his hardest routes back then was La Rage d’Adam (F9b/+) at the Ramirole Sector of the Verdon. At the time Bouin wasn’t sure about the grade. However, as both he and Adam Ondra has spent time on it working the moves together back in 2015 and they both felt the route was very hard Bouin settled for F9b/+ for La Rage d’Adam. At the time it was France’s hardest route; since then, however, Alex Megos did Bibliography at Ceuse. Whilst Bibliography has been repeated – by both Stefan Ghisolfi and Sean Bailey – La Rage d’Adam remains unrepeated; click here to read more about La Rage d'Adam.

Having done the first ascent of La Rage d’Adam, Bouin wanted another challenge, something even harder. The Ramirole Sector is a perfect place for Bouin to have super hard projects as he lives nearby and it’s climbable nearly all year round. Originally bolted in 2019 by Bouin, DNA was the perfect project. During 2021, Bouin split his time between climbing at Ramirole and Ceuse. When he was at Ramirole he was trying DNA and when at Ceuse he was trying Bibliography (F9b+). Sadly, and although getting close on both, Bouin finished last year without ticking either!

Hitting the ground running at the start of 2022 Bouin has eventually succeeded on DNA on his second trip there this year. Since bolting it Bouin has spent more than 150 days working on the route and has had over 250 attempts on the line before finally succeeding this year.

Seb describes the route in detail:

"DNA starts with an F8c intro of five quickdraws to reach a rest. Then there are some moderate moves to reach the first boulder crux at 8A (V11). It is a rather special bouldering move. You have to throw a right foot like in the modern bouldering competitions. Then you must propel yourself on a very, very far tufa. The physicality of the move makes it low percentage. It's really random.

Then there is the second crux of the route is an 8A+ boulder problem (V12). This crux is really physical, with a left-hand pinch to hold in order to go to an undercling that often slips. This section is quite dependent on friction. The weather conditions play a big role. At the end of this crux, there is a rest that allows you to recover your spirits before setting off again for a last fight in a final 8c+."

Once again Bouin is unsure about the grade believing that it is either F9b+ or indeed F9c. Having reflected on it Bouin has proposed F9c for DNA. Here’s what he says about the route and his proposed F9c grading:

“Of course, proposing F9c is taking a risk. A risk to see the route downgraded.  As there is currently only one other route in the world proposed at a similar grade, it’s hard to be sure and confident. I have never tried a similar route with a similar difficulty to DNA. F9c is my “proposition” for DNA, which now needs other climbers to give their consensus - to either confirm or adjust.”

Seb added: “Our sport is beautiful, we don’t need judges, we are the judges. It’s beautiful, but at the same time quite hard in this kind of situation, at the very cutting edge. That’s why I would love to invite the world’s top climbers to come and give DNA a go.”

Bouin has also compared the difficulty of DNA to other hard routes he has climbed saying:

"If I compare DNA with other routes I've done or that I’ve tried, it's really a step above. If I compare it with Move (F9b/+), or if I compare it with Bibliographie (F9b+), I have the feeling that this route is just harder. The time spent working on the route is also an indicator of the difficulty. I spent at least 150 days on it (I think it's closer to 200, but since I'm not sure, let's stay at 150). I spent about 40 days on Bibliography, and I was really not far from succeeding (I fell three times at the top of the route). I spent about 40 days on Move and succeeded in 2019."

If DNA is confirmed at F9c then it would become France’s hardest route although based on Bouin's comments it appears as though that is already the case. Adam Ondra’s route Silence in the Hanshallaren Cave at Flatanger is the only other proposed route with a F9c grade.

Before climbing La Rage d’Adam in 2019, Bouin had climbed Mamichula (F9b) at Oliana as well as making the second ascent of Adam Ondra’s Move (F9b/+) at Flatanger.