James Pearson has returned to Alcañiz and added Ba-Boom, a Font 8b+ direct finish to Master and Cinfuentes, the boulder problem he climbed earlier this year. 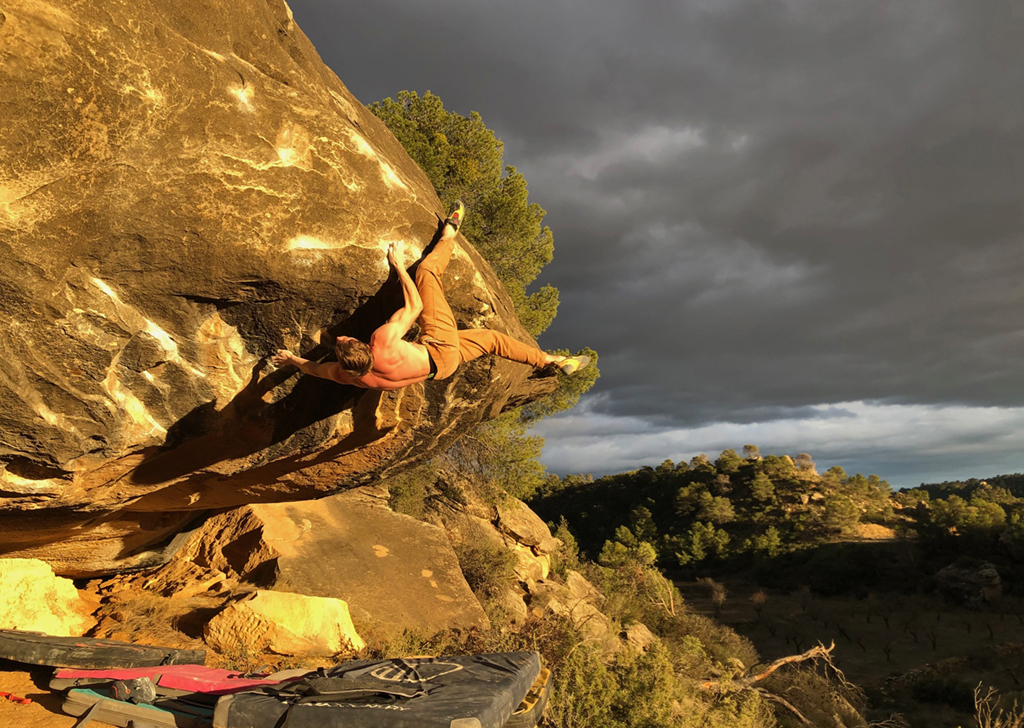 As we reported earlier, James and his wife Caroline Ciavaldin, have been concentrating on bouldering recently; as everyone with a young family knows it’s much easier bouldering with a toddler than doing routes! James and Caroline’s winter road trip before Christmas took them Alcañiz in Spain. At the end of their trip, James got super close to repeating Master and Cinfuentes (Font 8b+) but had to leave without the tick. Returning after the Christmas/New Year period however, James was able to finish off the job off and completed Master and Cinfuentes, his first Font 8b+, at the start of their trip. Click here for our full report.

Not content with repeating Master and Cinfuentes however James was drawn back to Alcañiz for more; specifically he’d spotted a direct finish. James told Climber the detail: “I’d seen the potential line, a beautiful line of brushed slopers leading up and out of the impressive prow, on my first trip to Alcañiz, and had always thought what a wonderful problem it would make. After climbing Master and Cinfuentes pretty early in the trip and feeling good on the crux moves that had previously felt very hard, I decided to give the direct finish some attention.

“With the help of some friends, I was able to build the landing was up a little to make trying the upper moves safe. It took me three days to climb the stand start of the problem, and then another couple of days to link in the sit [start]. The crux moves of Master and Cifuentes actually felt as hard as always, a great reminder of how difficult it is to find just the right body-position on the original problem.”

As ever, the next issue is what grade is it?! James again: “I gave Ba-Boom Font 8b+ and even though I think it’s quite a bit harder than the original problem, I think it still fits into that bracket. The more important thing however is how beautiful the problem is and how well and interesting it climbs. The sequence on the upper section that is just wonderful, and I’m really happy to have been fortunate enough to climb something like that!”

James and Caroline write more about adapting to life with a toddler in the team in their latest column, Moving into a Third Life, in the current (March/April) 2020 issue of Climber.