Master and Cifuentes (Font 8b+) for James Pearson


Climber columnist James Pearson has bouldered out his first Font 8b+ with a repeat of Nacho Sánchez’s problem, Master and Cifuentes in Alcañiz, Spain. Alcañiz is in the Ebro Valley between Barcelona and Madrid and around two and half hours from the more well-known Albarracín. The town is surrounded by a plethora of high-quality grey and orange coloured sandstone boulders with so far 1500 problems opened up with an equal amount still to do and is fast becoming a must-visit area.

For quite a few years now James has been concentrating on hard trad and sport climbing but when he was younger, he made a reputation of being a super-strong boulderer with the nickname ‘Steel Fingered Youth’. He made amongst other things the first ascent of Keen Roof (Font 8b) at Raven Tor and flashed Font 8a+/b with The Ganymede Takeover, The Great Shark Hunt and Schule des Lebens in Switzerland.

Now with a family, both he and his wife Caroline Ciavaldin have been concentrating on bouldering again as it’s logistically easier with a young son. Consequently, this winter they embarked on a road trip around the bouldering areas of Spain including, of course, Alcañiz. 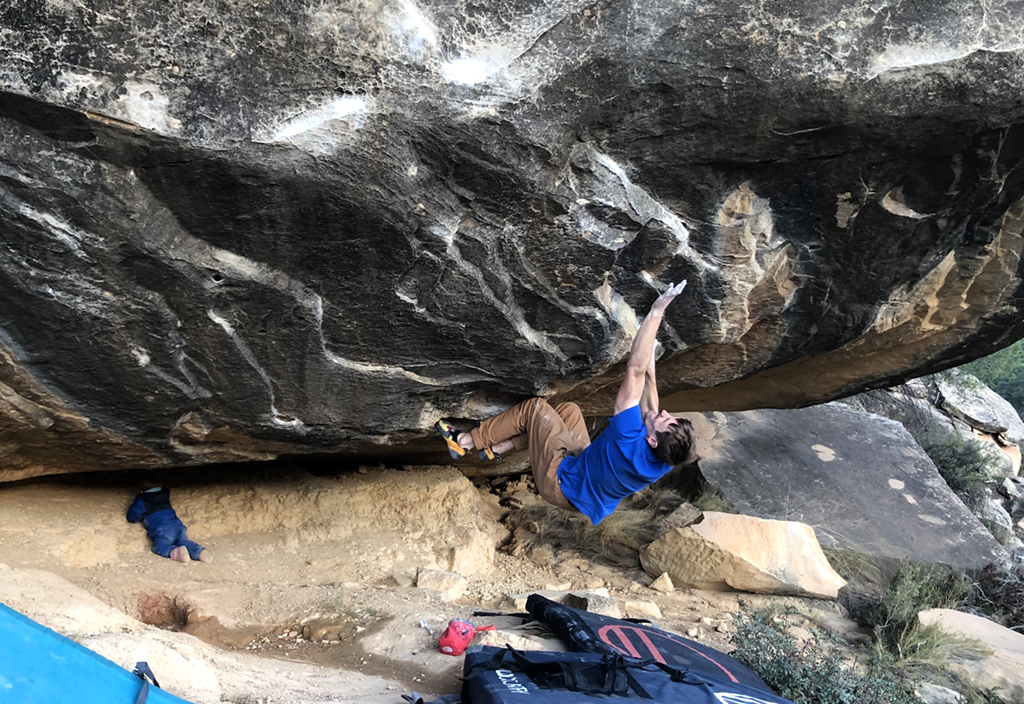 James told Climber about Master and Cifuentes; “I first tried the boulder on our first trip to Alcañiz which was just before Christmas. we visited both Alcañiz and Albarracin, and after climbing quite a few hard boulders at Albarracín I realised I was in relatively good shape. So, when we stopped off again in Alcañiz on the way home I decided to try something a little harder. The end of the boulder is a really beautiful Font 7c, and a sit start adds around 10 moves to this with a three-move crux sequence right at the very start. I managed most of the moves on the sit start pretty quickly, yet the crux remained elusive for quite some time. I eventually got through it on my third day, only to fall on the last move of the Font 7c, twice.”

He continued; “We had to leave to go back home the day after, but we knew we would be back soon enough. I trained a little over the Christmas and New Year holiday, especially working on my core tension, which I hoped would help with the crux.”

Putting in the effort when most of us relax and over indulge for a week or so, it certainly paid off for James; “Our return trip was a little later than originally planned due to the big storm that hit Spain, and even when we arrived in Alcañiz, the boulder was still pretty wet. After a few days to dry out I decided to go and start trying it again, pretty sure it would take me a few sessions to remember the moves. Thankfully my training seems to have paid off, the crux felt a lot more secure, and I managed to climb the whole thing on my second real try! It’s pretty nice to have finished my main project at the start of the trip, and now I can start working on some of the many other cool boulders down here.”