Bosi and Thompson-Smith on-fire at Kilnsey

Will Bosi and Molly Thompson-Smith were on fire last Friday at Kilnsey; Will redpointed Northern Lights (F9a) whilst Molly flashed Urgent Action (F8a+) and then redpointed Full Tilt (F8b). 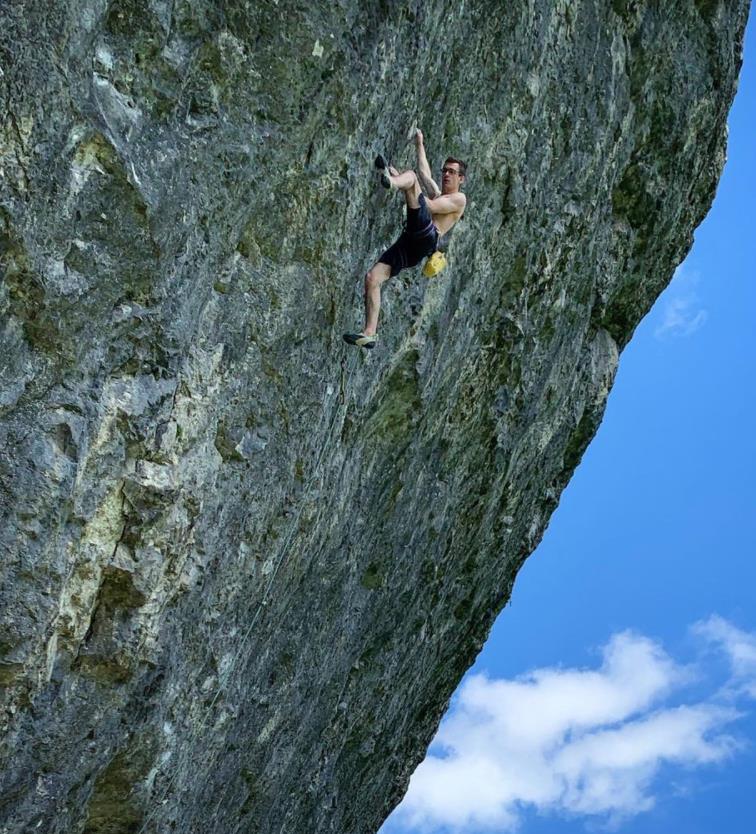 Midges and rain permitting, Kilnsey is one of the better sport climbing crags to visit in the Yorkshire Dales to escape the summer heat. Perhaps less so these days but North Buttress has also been where the hardest action goes down; a template upon which many base their summer action plans. Late last week, Will Bosi, Molly Thompson-Smith and Billy Ridal – three of Team GB’s competition climbers – rocked up at Kilnsey intent on getting a bunch of stuff done.

Will Bosi was on Day #2 on Steve McClure’s testpiece, Northern Lights (F9a). To say that Northern Lights has a stack of history behind it is something of an understatement. Having done Hubble – then F8c+ but now taken to be F9a - Ben Moon bolting the North Buttress line and then spent a solid chunk of time trying it. When Ben ‘moved on’ Malc Smith got involved trying it. He too didn’t complete and so the job fell to Steve McClure to step forward and try. Finally, after 16 days of effort, Steve sent in July 2000. Since then, only Adam Ondra and Alex Megos has repeated it so it quite a select group there.

So did Will enjoy the climbing as much as the history? “Definitely!” Will told Climber, adding “The climbing is really good and I really enjoyed trying it.” We asked Will what the hardest aspect of Northern Lights was and how his ascent went; “My success attempt was one of those perfect goes where I was right at the limit through the last couple moves but somehow managed to keep going! I think the hardest part was trying to decide exactly what way to do the top, as there are about 5 different sequence options to choice from.”

When Alex Megos repeated Northern Lights in 2016 he did it on his 8th redpoint on Day #2. Will, not only managed to replicate Alex’s Day #2 send but had Ben Moon belaying him as well! He had to be happy with both those –right? “Incredibly happy, having Ben belay and give beta was a really nice experience, especially after all the stories I had heard about the route.”

Finally, we asked Will whether Northern Lights was good preparation for the forthcoming lead comps; “Yes, very good prep for the lead comps as it’s similar in style and length. It’s one of those routes that really translates well between the two.”

Molly Thompson-Smith was also in action the same day at Kilnsey. Like Will, Molly is also preparing for the forthcoming lead comps so having had a fantastic run on hard boulders she’s transitioning back onto a rope. Remember that Molly became the first British female climber to onsighted F8b last year when she did Odysseus at Gotterwandl, Austria. Click here for our report on that ascent.

A few routes right of where Will was climbing is Pete Gommersall’s 1989 classic, Urgent Action (F8a+). Also known as Under the Thumb – Urgent Action is recognised as one of the very best routes of its grade in the Dales; so much so it is one of the famous ‘Triple Crown’ routes.  Famously it was flashed soon after its first ascent by an on-form Simon Nadin.

Molly told Climber how she got interested in Urgent Action. “I was pointed at Urgent Action for a warm up route whilst with Billy and Will who were both trying hard stuffs at North Buttress. Someone was working the bottom section of The Thumb and I didn’t know any other routes at there so thought why not. I like to try and give every route a good flash go, as it’s always better to have tried than felt really comfortable on the route and wished you’d gone for a flash go. Plus it’s a good mental exercise for me! Billy had already tried it years ago so he went up first to put the draws in and remember the sequences. He then gave me an excellent beta spray down which without I would’ve probably climbed more hesitantly around the bigger moves and that wouldn’t have been enough for them! I’m also really psyched to push my flashing and onsighting skills in the U.K., as it’s nails!!!”

Anyone that’s been on Urgent Action will know that the hard/long move in the middle suits the taller climber. Climber asked Molly if she had any beta for that section? “Not really- Billy was unsure how’d I’d find it, so warned me about it and insisted I had to just ‘go big!’. He said the hold you go to was pretty comfortable to catch dynamically so I had no worries about hitting a painful edge, and that allowed me to really go for it! I’m quite used to having to really commit to big moves being a shorty - generally if you don’t go all in you come up short!”

Urgent Action is a long and involved route and whilst it has descent shake-outs it has some tough moves. How did Molly’s ascent go then? “Slowly.😂  The higher I get on an onsight/flash go, the slower I climb as I really don’t want to fall near the top! But I felt pretty in control the entire time. I think it’s a great flash route as there’s little tricky bouldery sequences followed by good rests. So I just tried to stay focused during the trickier sections and make it to each rest. I only had whack beta coming over the bulge but otherwise it was an enjoyable flash go! Apart from the kinda sketchy headwall where I felt a little bit stressed!”

At 30m its good endurance work-out for the comp season? “Yeah it really felt like good training actually! I actually tried to climb The Thumb at the end of the day in six minutes as comp prep but also as Billy and Will were being eaten alive by midges! It was close but I fell coming over the bulge - that’s a real heartbreaker final boulder!!

As well as flashing Urgent Action Molly also sent Full Tilt (F8b) as well in the day. She must have been pleased with that as well? “Yeah I kind of wanted to give it a good flash go too but ended up being stopped by quite a long move at the bottom. But I was pleased to get it done 2nd try after!”

Both Will and Molly are back at Kilnsey this week so watch this space for more news.