Molly Thompson-Smith has just on-sighted her first F8b, Odysseus at Götterwandl, Austria becoming the first British female to on-sight at that grade. 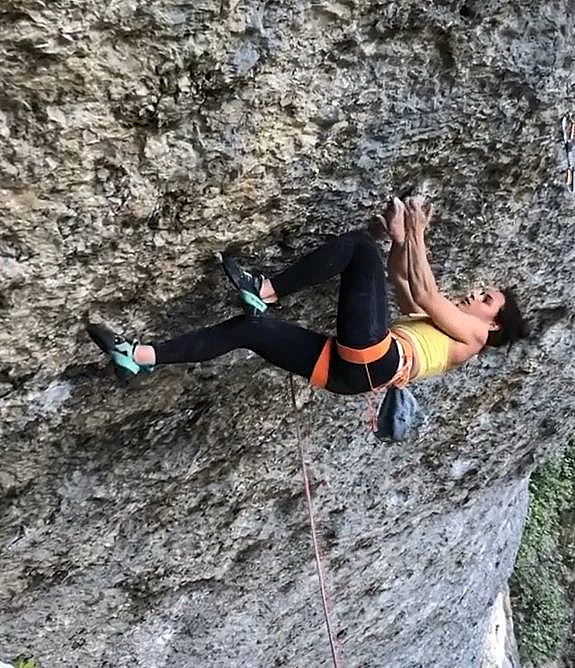 It was over a decade ago that British female climbers first began to on-sighted F8a. Lucy Creamer, one of the best all-round female climbers ever, was one of the first to hit the magic grade. Lucy went on to on-sight a number of F8a and her best ever effort was dispatching two F8a on-sights in a day during one of the (then) best ever short duration overseas trip by a British female in late 2014 (click here for that report). Emma Twyford, having established her credentials by flashing Statement of Youth in 2011, has also on-sighted a number of F8a. Recently Emma came painfully close to on-sighting  Marroncita (F8b) in Spain falling off just before the belay. Hazel Findlay joined the party with an on-sight of Les ailes du désir in the Gorge du Tarn in 2012. More recently, Maddy Cope has also on-sighted F8a. However, in August 2018 Rhoselyn Frugtniet pushed higher into the F8s with a flash of Face de Rat, 8a+, Ceuse.

Let’s now bring Molly Thompson-Smith into the picture. Whilst she initially concentrated more on competition climbing Molly has been climbing more and more outside recently during which time she notched up two F8a on-sights at Chulilla and a further F8a on-sight in the Frankenjura. Molly opted to accompany her partner Jan Hojer back to Germany during lock-down and was able, as she told Climber, to continue her training largely unaffected. That meant she burst out of lock-down in brilliant shape and has been tearing up the routes ever since. Not un-naturally, Molly has been pushing her on-sighting game during this period and that resulted in her on-sighting Odysseus at Götterwandl, Austria.

Climber has been in touch with Molly asking her about her climbing and how her on-sight of Odysseus came about.

Congrats on the F8b on-sight; how did it come about and how did it go?

"Since Jan is competing at the World Cup in Briançon later this month, we thought we’d do a little mini European sport climbing tour. Our first stop was in Götterwandl, where we had four short climbing days. Odysseus had been recommended to me by an Austrian friend so I’d planned to get on it at some point, and I thought maybe it would be nice to try and flash it after Jan tried to on-sight it, but I haven’t flashed 8b so that it would be asking a lot!"

She continued, "However, I was trying a route called Janus (F8b+/c) that day, and after going through the moves I had managed to climb it in two halves. That had taken a lot out of me, as the route is 25m long (I’m used to the FJ now so that feels long ha ha) but I didn’t feel completely done. I decided to just have a go on Odysseus as it was only 10m long so a different style of climbing that I hopefully wouldn’t be too tired for. I got on feeling semi-committed, but after almost falling at the first crux lower down and being surprised I was still on, I decided to properly go for the on-sight. I climbed really well and just kept on moving up until the next decent enough hold to shake, and see the anchor getting closer."

Is on-sighting an F8b something that you’ve been working towards for a while?

"On-sighting has always been something I’d love to be good at, but I don’t think it’s my style. I like going up a route to refine the sequence, and then trying to send it second go/quickly for a super-efficient process and then having the energy left for other routes. But I’m definitely trying to give more routes a good on-sight go, as it’s a super useful skill for comp and I’m not sure it gets much more satisfying."

You did a couple of F8b’s a while (Akira and Plan B) ago on your second attempt; were you close to getting the on-sight on those?

"I’d actually watched a video of Plan B before getting on it, but the flash didn’t feel too far off. And I’d watched Jan climb the first half of Akira before I got on it, but it took a fair bit of working out how to make the big moves fit me higher up so it wasn’t an on-sight route for me!"

Have you been targeting a particular style of route for your on-sight attempts?

"I haven’t really been aiming to on-sight things, but if I was to choose a style I’d go for shorter and slightly overhanging. I’m not a huge fan of techy vert walls, and feel more comfortable on steeper and powerful endurance routes."

Was/is it the plan to help your indoor/competition game?

"Honestly, I stopped thinking about comps for 2020 a few months ago. I decided I could use this year to enjoy some time of climbing what I wanted when I wanted, and pushing myself to find my limit on rock. But I’m sure being good at on-sighting on rock translates well to being able to climb well on World Cup routes."

You’ve been ticking off quite a few F8c and F8b+’s as well since lockdown ended; all pretty fast too. You must be psyched at how your lockdown training went and now how well you’re going after lock-down?

"I was lucky to have chosen to spend the last few months in Germany with Jan where the situation was very different to the UK. With Jan having qualified for next year’s Olympics, he had access to walls before the general public, and I was able to make use of those privileges too. Therefore I didn’t really lose anything, and could take my training with a relaxed approach. But I’m still really pleased with my shape on rock... I’ve tried hard to get better at it and put myself out of my comfort zone a bit (I was always terrified of being above a bolt... no idea why)."

What are your plans for the summer? More outdoor action; perhaps a sneaky look at an F8c+/9a somewhere? More on-sighting?

More rock for the summer! I’ve already put a bit of work in on some harder lines, and hope to try and on-sight more hard routes! I’ve got an F8c+ & F9a project in the Frankenjura I’m really excited to come back to once it cools down a bit! But for now I’m about to climb in Ceuse for the first time!

What are your thoughts about the forthcoming comps this autumn? Keen to get involved?

"I won’t be competing at any World Cups this year - only the European Championships in November provided they still happen then. I personally think it’s a little early for world cups as not all countries are at the same stage when it comes to Covid-19. But I’ll be cheering for all my friends that are competing in the next few months!"