What’s in a grade: How do grades work and do they matter?

How do Climbing Grades Work?

Climbing has a bewildering array of grading systems. Each one is largely assigned to a particular discipline, and understanding how they work and relate to one another can be very confusing. On one hand, sport climbing grades provide a scale of difficulty which enables relatively easy comparison. However, UK traditional or ‘trad’ as well as winter climbing grades offer more information about a climb than simply how hard the climbing is. Traditional and winter grades can also help provide insight about the style and seriousness of a climb. Here we will try and shed some light on these grading systems and how they work.

Many people are introduced to climbing through climbing walls, where the French grading system is widely used and accepted. Typically, most climbing walls have routes starting around F5 (F5a, F5b F5c). As climbs get more difficult, the number and the letters (a-c) increase.

Therefore F6a, F6b, F6c are harder than anything prefixed with the number F5, and the grade with the highest letter (in this case 6c) should (in theory) be the most difficult. This system is open-ended and continues in this way (F7a, F7b, F7c, F8a, F8b, F8c) up to F9c, with Adam Ondra’s ‘Silence‘ defining what is currently the very top-end of today’s standards.

As indicated above, each grade can be sub-divided with a + symbol. Take F6a+ for example. This is a grade in its own right, but it’s essentially a way of indicating if something is hard for the grade (i.e. too hard to be F6a, but not hard enough to be F6b). Remember that grading is not an exact science, but more a suggestion as to a routes difficulty. It’s also worth noting that some climbing walls don’t break down routes in the fifth grade and simply donate F5 or F5+. 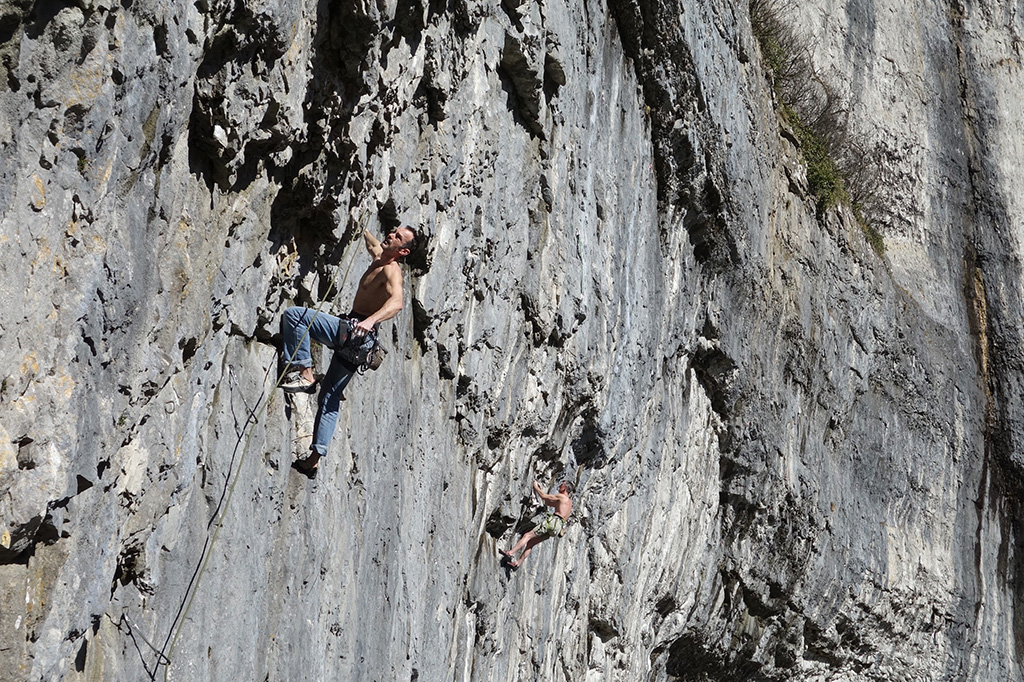 Now things start getting confusing! The UK has a long history of traditional climbing. Routes climbed in this style are generally protected by a leader who places protection as he or she climbs. This protection is then usually removed by a second who follows the climb. Once again it’s an open-ended system that is evolving as standards increase. The major difference is that it’s a two-tiered system that conveys more information than simply how physically difficult a climb is.

The first part of the grade is what is called an ‘adjective grade’. This attempts to give the climber an idea of a climbs difficulty, taking into account less tangible factors such as: how much gear (protection) is available and its quality (seriousness); exposure; rock quality; and how sustained the difficulties might be. This scale has been ‘modernised’ but essentially starts at Moderate (Mod) and continues up to E11. The subdivisions are as follows:

The second part of the grade it the ‘technical grade’ which gives a more tangible idea of how hard the hardest move, or crux sequence might be. Technical grades take the same format as French sport grades but are not the same thing. Generally, most guidebooks have English technical grades starting at 4a, and it continues: 4b; 4c; 5a; 5b; 5c; 6a; 6b; 6c; 7a; 7b.

When adjective and technical grades are used together, they can convey useful information when compared to one another. For example, a route that is graded VS 4a is going to be easier physically than a VS 4c, but to compensate for having the same adjective grade something else about the VS 4a is going to make it difficult for it to have the same adjective grade. In this scenario, it is likely that there won’t be as much gear available making the route a more serious proposition. There could also be loose rock, or the route might just have a big or committing feel about it. Again, it’s not an exact science but the grade can give an indication of what you might expect to find up there.

Standing back from the crag or having a good look up on the walk in might fill in a few of the blanks, and help explain why a route gets the grade it does. Are there lots of cracks or obvious places to arrange gear? Does it look loose, blank or ‘out there’?

As a general rule, if the technical grade is high for a particular adjective grade (e.g. E1 5c), you might expect to find a few hard moves that are relatively well protected. A route with a lower technical grade in the same adjective grade (e.g. E1 5a) is likely to have less difficult individual moves, but may have more sustained climbing and will probably be less well protected overall. 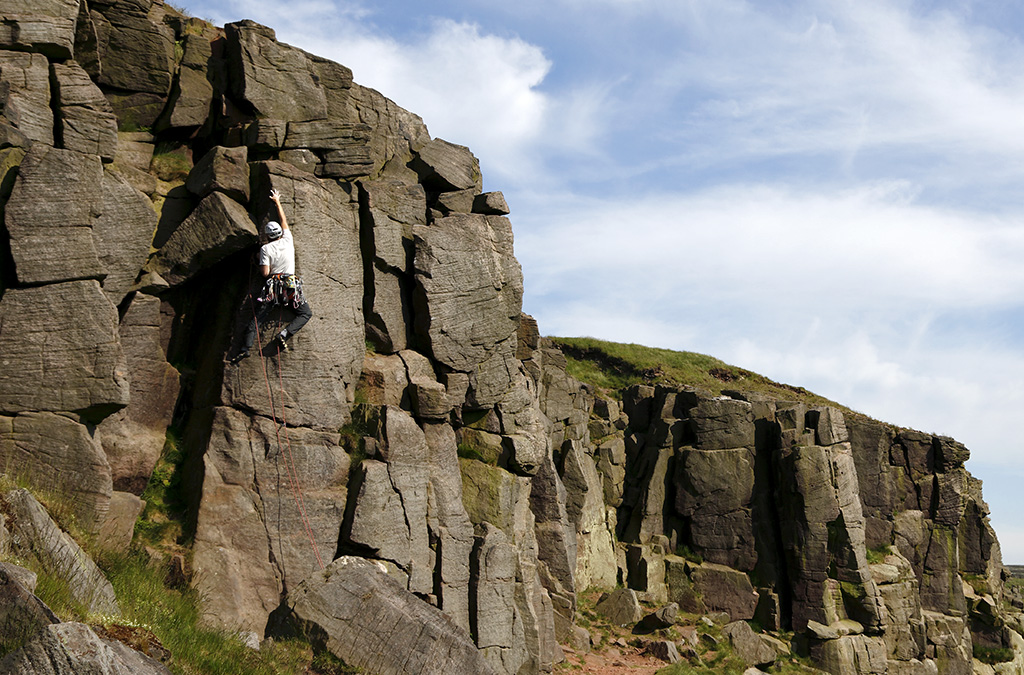 Winter climbing grades work in much the same way as UK traditional grades using the two-tier system outlined above. However, the adjective grade is replaced with Roman numerals which indicate the seriousness of the climb and the Arabic number indicates the overall technical difficulty. For example a grade of V,4 would indicate a serious ice route, whereas V,5 would indicate more adequate protection and V,6 or V,7 would more likely indicate better protected mixed climbs. Again the system is open-ended and evolving as standards increase. Winter climbs generally start using the two-teared system on climbs above grade III.

The following gives a rough outline:

Grade I: Uncomplicated. Usually average angled snow climbs around 45º however they may have steeper cornice sections towards the top.

Grade III: Gullies, buttress and ridge climbs. Usually at least one substantial pitch and possibly more but only technical for short sections.

Grade VI: Thin and tenuous ice routes or long vertical sections. Mixed routes requiring all techniques and difficulties outlined before, but more of it.

Technical grades on snow and ice

A rough guide to technical grades on ice:

It’s important to remember that whilst all grading systems are subjective, winter grades are even more so given the huge variety of environmental conditions that affect the routes in our mountains. 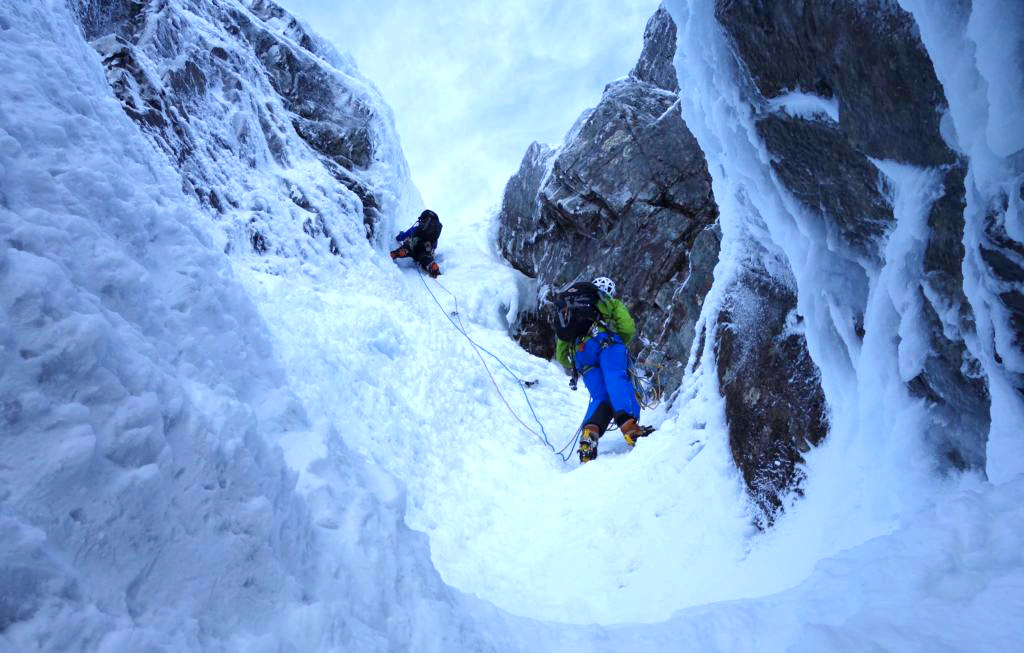 What’s in a Grade Anyway?

The grading systems outlined here are really useful tools and can help climbers understand what is required to tackle certain climbs as our ability and experience grows. However, I feel it’s important to remember (despite writing this article) that it’s also good not to get too bogged down with grades! Climbers can become so obsessive about grades to a point that the experience and value of a climb diminish altogether!

It’s important to enjoy climbs for what they are, and remember that the pioneers of some of our greatest and most classic climbs did them with far less gear and technology than we have today. What’s more, they often gave them a lesser grade than they get in our modern guidebooks!

It is nice to climb from time to time without using a guidebook, and simply choose a natural or aesthetic line and use your own experience and judgement to gauge whether a climb is going to be within your ability or not. Picking up the guidebook retrospectively to see what you’ve just done can be a great way to climb. With a little experience, and being able to compare routes with one another, patterns can be found within the grading systems and good sense can be made of it which enables confidence to grow. In this way, grades become a tool rather than a prize, which is surely what they should be?