With this country’s inclination for bad weather at the most inconvenient of moments, UK rock climbing can sometimes seem solely comprised of revisits to the trusty indoor climbing wall. For casual climbers, who may perhaps already have done the majority of routes at a centre in their grade range, it can at times feel a little bit frustrating.

But not to worry, because if you are after a change in routine then you can always grab the friends and try your hand at some indoor climbing games. Games on climbing walls can help create a great social atmosphere but even better than that, they usually increase the length of a beginner’s session and can even help improve one’s technique, endurance, body positioning and much more.

For this reason, we’ve listed four different games for you to have a go at next time your struggling to think of things to do down the local wall:

Objective: Players take it in turns to ‘add a move’ to a section of climbing wall. The game ends when a player puts up a move that no other contestant can progress though.

Probably the most popular of all climbing games, Add-a-Move can involve any number of people, making it a great activity for larger groups. Starting off on a section of wall, one player makes the first ‘move’. The next person then has to repeat that move before adding his own (hanging from it statically to show that they haven’t just lunged for it.) The game continues like this as the players contribute more and more moves to the sequence, increasing its length to often maddeningly pumpy levels. 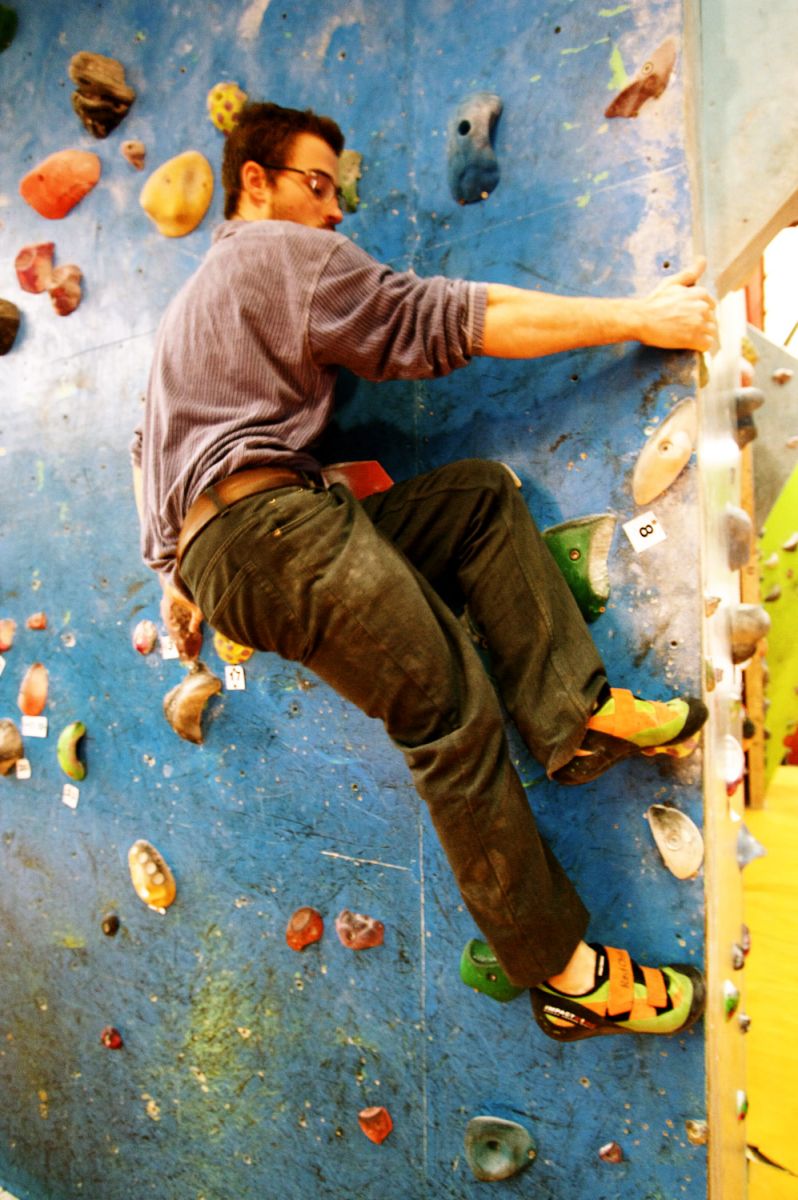 The game is best played with a ‘hands-only’ designation of holds, but can also be done specifying which footholds to use as well, which is good for groups of climbers around the same height and ability. New moves should always be added by alternating hands, i.e. if the person before you added a move with his left then you have to make the next move with your right. This ensures that players climb through a bad hold, rather than just touching it and then lunging for something else.

The game can end in two ways (well three if everyone gets bored and stops); firstly players can be given three lives. If they fail to add a move then they lose a life, the winner being the last person to keep their lives. The other, simpler way, is to keep going until someone puts in a move that no one else can do, they’ve then obviously won. However if you are all of the same ability this can sometime take very a long time!

Add-a-Move is great as an endurance training exercise, as practice for memorizing complicated sequences, for focusing on specific hand and foot placements and also as a means for learning to use and talk about climbing beta.

Photo: The author midway through an absorbing game of Add-a-Move

Objective: Pick a route or problem you can do easily and take turns climbing it, each time eliminating a hold. The winner is the last person able to climb the problem without using the holds eliminated.

Detract-a-Move, or Take Away, is a compacted version of its sister Add-a-Move. A small number of players pick a problem (or if a large group, a route) and then take turns ascending it. Each time they climb the line, a player has to avoid a hold of their choosing; this hold then becomes ‘out’ for the rest of the game. Pretty soon, there’s very few holds left, and the winner will be the climber who can reach the finish of the newly stripped problem when all others have failed.

Detract-a-Move is good for forcing climbers to think about body position: players will often have to stretch far to reach the next hold so correct positioning becomes vital. It is also useful for making the climbers think tactically about holds and how they can possibly utilize them to overcome the eliminated sections.

Dyno is not a regulated game with many rules, but nevertheless most people will have tried it at some point during their time indoors. Find a good section of a quiet bouldering room with lots of decent holds on it; now compete with your mates to see who can dyno from what to what. Starting off with small jumps between large holds, much fun can be created by then tweaking the variable of the jumps. You can try it one-handed, double-handed, on vertical or overhanging walls, even sideways. Just make sure that the area you’re in isn’t busy, has good pads on the floor underneath and that there are spotters there to catch you should your flight go awry.

Another type of jump you can experiment with is the double dyno: this is where you use large starting holds to dyno upward then stand on your initial handholds before then jumping again to your target hold, all in one fluid movement. It takes a bit of practice but some serious distance can be achieved in this manner.

Indoor dyno games are an excellent way to teach climbers about the usefulness of dynamic movement in situations where the static alternative would be just too difficult. It is also a great confidence builder, so long as the jumps remain controlled!

An example of what regular dyno practice may one day lead to.....

Objective: To climb a problem or route making as little noise as possible.

Stealth is one of the best activities a beginner can do: the objective is very simple, to climb a given route or problem whilst making as little noise as possible. This means climbing without any foot scraping, knee banging, frantic clipping or any other wild movements. On easier lines this is not too demanding, but transferring the Stealth game successfully onto climbs closer to your limit requires mighty concentration. It is brilliant for teaching new climbers about precise foot placements, and also of the importance of technique, especially when you’re tired and just want to thug your way to the next move!

Obviously there are many more climbing games that can be played indoors and out: we’ve included here just the briefest selection of the most popular ones. But if you have a good activity or game that you think is worth a mention, then why not get in touch?