There is no need for me to introduce this month’s Masterclass interviewee. There are few who would dispute Steve McClure’s reputation as Britain’s most accomplished sport climber. While it is vital to have climbed hard in order to be able to coach from first-hand experience, the flip side of the coin is that the harder you climb, the trickier it can be to empathise with those who are climbing at a modest standard. I have tried to play devil’s advocate with all my chosen candidates for this on-going series of Masterclass, and my big question for Steve is how he adapts his own approach to suit the individual needs of his clients. Remember, coaching is a non-precise science, and every coach has a slightly different style. Will Steve’s tips work for you? Take a look and see for yourself.


(After 10 years climbing at the hardest standard in the UK, Steve McClure went one step further with Overshadow (F9a+) at Malham. Photo: Keith Sharples) 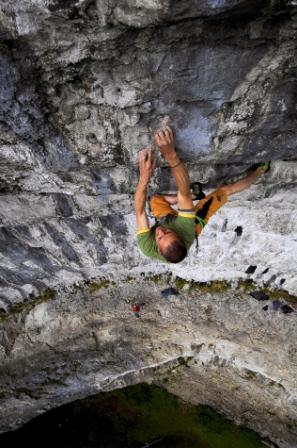 Neil Gresham: Steve, please can you give an example of a golden coaching moment?
Steve McClure: On a one week coaching holiday in Kalymnos one of the girls was a real fighter with a desire for success. We put her on an F6c redpoint, which was way above her wildest dreams. On the last day, already exhausted, she put in the biggest fight I’ve ever seen by anyone and made it by the skin of her teeth. It was honestly incredible to watch and brought a tear to my eye. If anyone says you need to be climbing super hard to get a lot out of climbing they are much mistaken.

NG: What do you think are the main areas where people go wrong when it comes to training?
SMc: When intermediates think about improvement they tend to think the best way is to get stronger. It will help, but may not be the weakest link. Technique and mental issues are more likely to be a stopping point. With elites, it’s sticking to what they know best in terms of training. Probably ignoring weakness and working on strengths.

(The cave at Santa Linya is one of the favoured Spanish winter hang-outs for top wads. Steve McClure is seen here redpointing an F8c+ on his second go on day two. Photo: Keith Sharples) 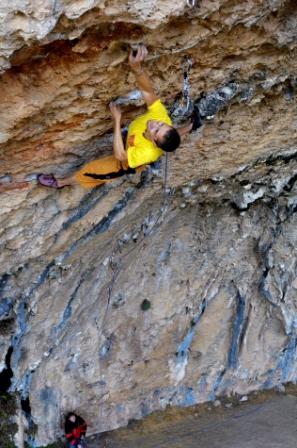 NG: What is your general approach to planning a training programme for your clients?
SMc: The most important thing is to plan a strategy that fits around work and life. It has to be realistic. The next part of the plan depends on the individual and whether their goals are long or short term? Everyone is different and some will stick to a long-term plan (with potentially loads of boring hard work) whereas others want fast gains otherwise they will give up.

NG: How should the optimum number of training days per week vary according to different climbing standards?
SMc: For beginners (up to F6a), the emphasis should be on gaining mileage on easy ground so, in theory, you could climb almost every day. Of course, few will have the time for this and most will settle for two or three sessions a week. Intermediates (mid F6s to mid F7s) tend to be pushing harder and hence rest days are more important. A ‘two on - one off’ strategy works well: day one hard, followed by day two easier, followed by a rest gives time for trying hard stuff followed by an easier day of movement and technique consolidation. The key is to vary this and to do more or less training days in a row, depending on how the body feels.

For elites (F8s +) a more thought-out plan is required and this will depend on whether the climber is performing or training. There is a big difference. During the summer, or whatever time the climber sees as their performance period, as soon as the day is over, redpoint attempts or on-sighting, the climber goes into recovery mode, resting before the next climbing day where they will again be looking for a personal best. During the training phase there is no need to be in peak shape on a given day, so the climber can train to the max, knowing performance will be compromised. When performance is key, it is important to rest properly, and when training its important to put the effort in. ‘One on - one off’ is a good strategy for performance, and 'two on – one off' is better when training hard. The first day can be power-based, where muscle is broken down and the second day can target endurance.

NG: I will be speaking with Leah Crane about power training next issue, so how about you give us a few of your best endurance training tips?
SMc: Generally speaking, for routes climbers fall off through lack of power endurance most would benefit from a five-week block of training power endurance, while simply maintaining their power. This will make a big difference. I’d suggest power endurance work twice a week with one session of bouldering to maintain power. Fingerboards and campus-boards are useful for elites, but routes and circuits are a better way for mid-grade climbers to improve endurance. Lapping the same routes has less merit compared to doing different routes, as the mind is not exploring new movement or struggling with the unknown. It is all too easy to stick to what feels nicest and forget how much easier things get with practice. Ask yourself if your training is replicating the feeling you get when doing your event?

In addition to training ‘pure’ power endurance (on sustained terrain) ‘recovery’ is also important. Most routes on rock have relatively short bursts of hard climbing, and two minutes of continuous hard movement would be a very long stretch before the rock offered a hold on which to attempt to rest. Typically routes have a crux section and then a breather, and possibly more crux sections to follow. The key is to be able to operate deep into power endurance terrain, as well as having the ability to shake off a pump on poor resting holds.
(Steve McClure on Animal Magnetism (F7a+/S0) at Lulworth Cove during one of the infamous Deep Water Solo fests. Photo: Keith Sharples) 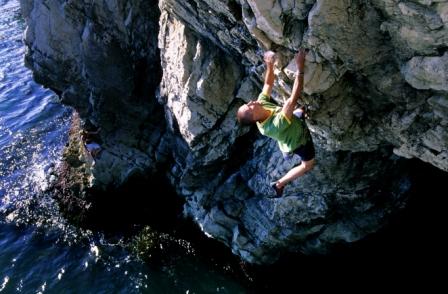 NG: Any special advice for juniors or veterans?
SMc: Juniors should spend more time on rock and new wall surfaces. Keep the volume of movement high and the training element relatively low. Movement skills are best learnt when young, whereas power and strength can be gained later. Stay away from finger intensive training like campus boards, but don’t shy away from fingery climbing, as it’s important to build finger strength progressively. For veterans, power is hard to gain when older and rest becomes increasingly important. This is obvious, but often forgotten. Use all those time constraints to your advantage: train less but do hard sessions that you actually have to recover from. Vary the training and divide it into blocks. Take a good look at what you have been doing over the years - if you want to improve, or even stay the same, then doing the same old stuff won’t lead to anything!

NG: Steve, what is your advice for someone who can produce good technique when they’re within their comfort zone, but it goes to pieces as soon as they get pumped or scared?
SMc: Spend more time redpointing routes that are physically very taxing. This could be ‘first redpoint’ after a single working go, or something that takes a few days. This helps reduce the element of unknown, which is one of the biggest components of fear associated with on-sighting. With this removed it’s possible to push hard while maintaining a focus on good form, even when the climbing is right at the limit. With time, this will cross over to on-sighting.

("Sport climbing on nuts" is how Steve McClure described Dave MacLeod's route Rhapsody (E11 7a) at Dumbarton Rocks following his four day send of the then hardest UK trad route. No-one else has blasted anything of that grade off that quickly so he's clearly not just a sport climber! Photo: Keith Sharples) 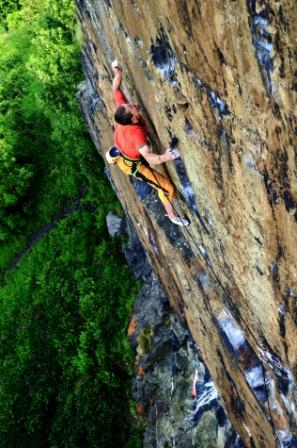 The biggest tactic has to be the planning around the weather. Whether it’s too hot or cold and the presence of sun or shade has a huge effect on climbing conditions. Plan your attack. If there is a small window of opportunity make sure you are ready to jump through it. If it’s cool and crisp in the evening then put in a steady warm up, so you’re ready to have two good goes when it counts. If it’s cool only in the morning then go to bed early and get up early!