Speed in the Mountains part 1 – Changing up a gear

As the conversation turns to the Alps and folk put together their summer wish list it’s a reminder to start that fitness campaign that’ll lessen the pain of those lung-busting walk-ins. Yes, it does makes sense to boost your aerobic capacity in the weeks preceding a trip, but as well as shaving off precious minutes from the approach and arriving at the start of the climb fresher than normal, you could also trim the excess faff (time spent in ineffectual activity) from the climb itself and save far more time overall by honing your Alpine terrain specific skills and ropework.

It’s well-known that the more specific your training the more effective it’ll be. So although being climbing fit and aerobically fit is vital, moving well on classic Alpine terrain is equally, if not even, more important. There are two main components to this; how well you move and what you do with the rope. 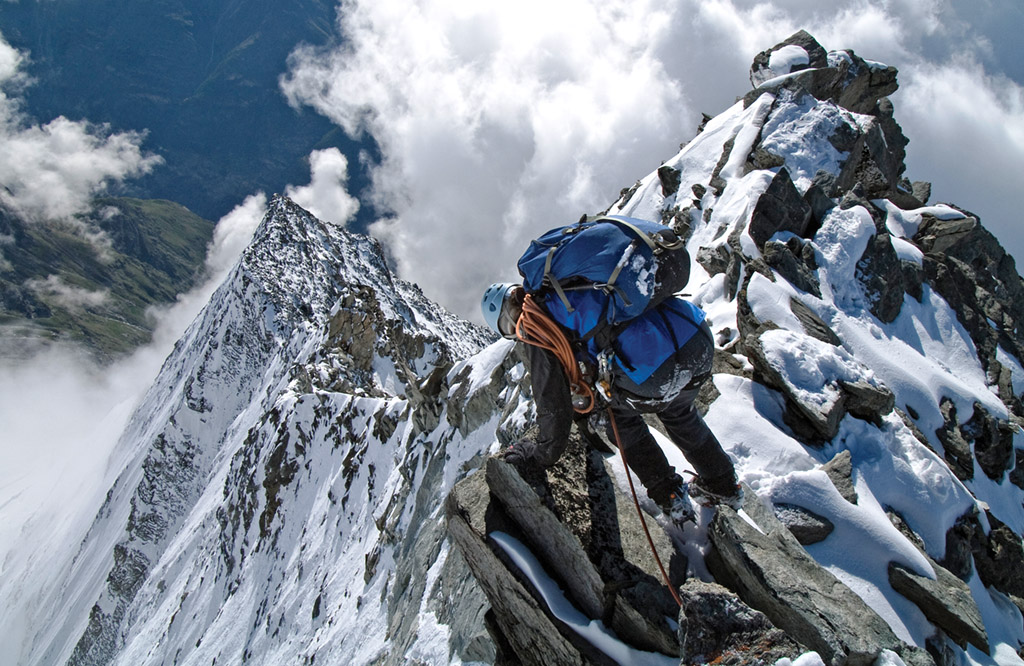 Classic Alpine terrain encompasses routes in the PD - AD range, so that’s Peu (not very) and Assez (quite) Difficile, which lie somewhere between tricky walking ground and proper pitched climbing. Roughly translated that gives you scrambling and easy rock climbing, grade I/II snow or ice and simple mixed terrain. In essence, much of it is technically easy but serious terrain where speed is important but a slip could be catastrophic. It’s ‘big boot’ country so it makes sense to be well-practised and confident in the art of negotiating awkward ‘gendarmes’ or pinnacles on exposed ridges, short pitches of rock-climbing, loose rock with and without snow, up down and sideways movement and all that in crampons too. You may have your sights set on harder climbs but you’ll undoubtedly encounter this moderate ground on the approach or descent, and like with any style of climbing, the more you do the better you get.

Have you ever had that feeling that the rope is more of a hindrance than a help? As UK-based trad climbers, we tend to be pretty good at pitched climbing, which transfers readily to Alpine rock routes, but it doesn't help much when deciding how to use the rope effectively on terrain that doesn’t quite require pitching. Deciding when to put the rope on or take it off, whether to climb in long pitches or move together with the rope shortened are difficult decisions to make and are invariably where you’ll lose most time. Often you’ll end up thinking ‘I’d be better off soloing this’, because you either over-pitch i.e. run-out pitches on ground that’s too easy or start both moving at the same time and soon find yourself on a terrifying ‘one-off, all off’ type manoeuvre reminiscent of Whymper’s ill-fated Matterhorn descent. But stick with it; there are ways to make it all safer and quicker. We’ll look at the nuts and bolts next month, but in essence, you’ll hardly ever need to run out a full rope length, if you do it only tends to snag. Instead, shorten the rope by taking chest coils and look for mini-pitches between obvious ledges where you can find simple direct belays like spikes of rock. If the terrain doesn’t call for pitching at all you can move together but make it safe by placing runners between you or weaving the rope around natural spike runners.

It’s often true that if you try to do things too quickly, it will take you longer in the end, but I would argue that’s only if you haven’t rehearsed at race speed.

Next time you have a spare half hour put on your harness, grab a rope and a stopwatch and time how long you take to tie on and take 10 coils. I’ve just tried it. Off the couch I clocked a slovenly one minute and 20 seconds but after a few attempts and with more focus I got it down to a smooth and comfortable 45 seconds. (And before you think I’ve gone completely mad, it’s no different from triathletes who practise their transitions ad nauseum in order to shave milliseconds).  If your best efforts are in the range of 40-60 seconds consider yourself a Jedi. If you take considerably longer maybe it’s worth practising!

Alpine routes in the UK

The UK has plenty of Alpinesque mountain routes on which we can practise these techniques and suss out when it's best to switch between pitching, moving together and soloing. The best are those that are long and committing but technically easy. They may be graded scrambles or rock climbs and are often classics themselves taking THE line on the crag or mountain. Leave your rock boots in your ’sack but engage an Alpine mindset with speed and efficiency to the forefront. Here are a few ideas:

East Gully Ridge, Glyder Fach – only a hard scramble but a good route to start on.

Amphitheatre Buttress (VD), Carneddau, an Alpine route in all but postcode.

Bowfell Buttress on Bowfell in the Lakes is an obvious choice.

Bilberry Terrace – again only a scramble but this time serious, loose, inescapable, can mostly solo but is interspersed with short awkward steps/pitches. 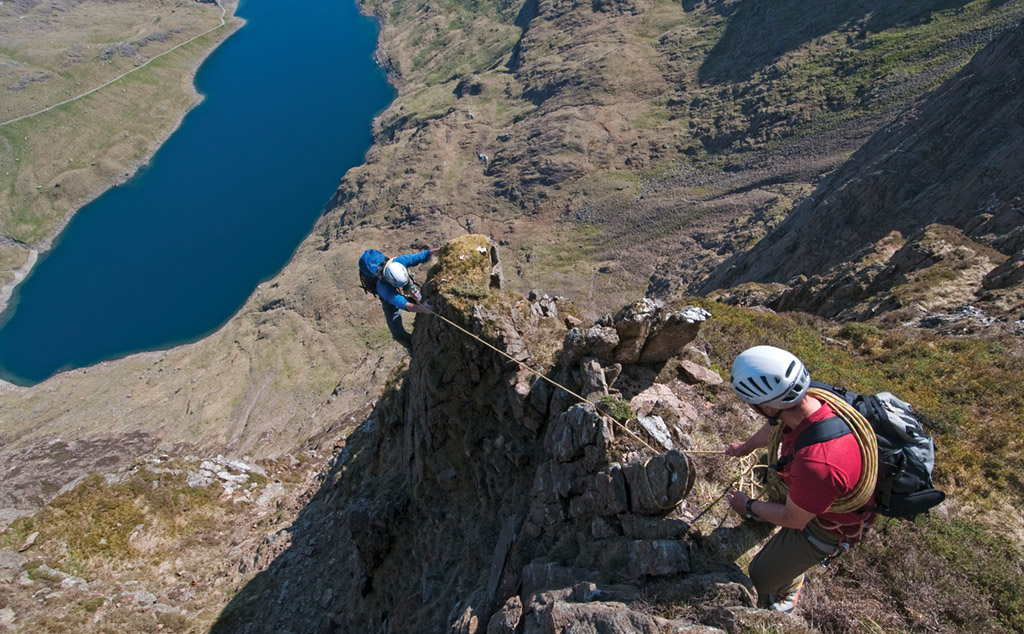 Tower Ridge, Ben Nevis – as Alpine a scale as it gets in the UK (take a headtorch). 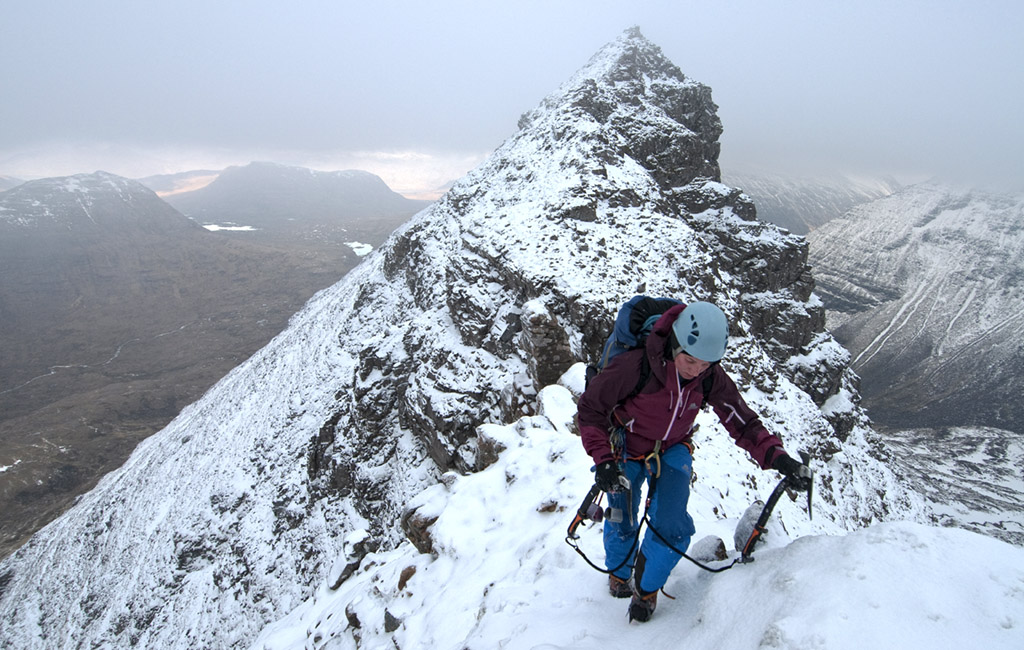 In the next part, we’ll look closely at the actual techniques – taking in coils, quick direct belays, principles of moving together and generally reducing that irritating faff factor.