Where to find dolerite

We don’t have tons of dolerite in this country but the chunks we do climb on give memorable excursions. If you’ve climbed on Dinas Mot in the Llanberis Pass you may have been struck by the dramatic switch from pale smooth rhyolite on the central nose, which is flanked above and on its wings by dark rough dolerite. Tremadog and its outliers are the other classic dolerite crags that we all know but it’s often hard to believe that it’s the same rocktype as you slip helplessly from one polished to hold to the next.

Central Scotland has a scattering of smaller but significant dolerite crags and boulders like Dumbarton Rock and Auchinstary Quarry near Glasgow and up on Arthur’s Seat it can be seen but not touched mingled with basalt in impressive surroundings on Salisbury Crags.

Perhaps the most famous chunks of dolerite we have, not that we climb on them of course, are the great ‘bluestones’ that form part of the Stonehenge circle that originated in the Preseli Hills in Pembrokeshire.

Dinas Mot dolerite is the best of any we have. If dry conditions prevail rather than follow the hoards onto the Nose visit the East Wing and look up Gollum (HVS 5b), or make the journey to the West Wing where you’ll find the excellent Plexus (E1 5b) and Ten Degrees North (E2 5c).

Down the road at Tremadog the main crags hardly need any introduction and there are stars (and queues) in plenty, so when it’s mobbed at Eric’s cafe nip along to Two Tier Buttress and seek out Stromboli (HVS 5a) or Helsinki Wall (E1 5b), the setting is peaceful and the friction on that buttress immaculate. Schedule in a visit to Craig y Castell (above Tremadog village itself) and treat yourself to Creagh Dhu Wall (HS), an all time classic or drive two minutes round the corner to Craig y Gesail where a whole cluster of VS gems like Touch and Go await and you’ll more likely than not have the crag to yourself.

How to climb dolerite

In many cases dolerite has a delicious rough texture that makes for excellent friction, an attribute that proves essential to see you safely through the frequent technical moves you encounter (and if you’re confused by this term ‘technical move’ well really it’s a catch all for anything that’s not blindingly obvious).

Dolerite moves typically require creative thinking coupled with precise and confident footwork. On first arrival the move ahead can be completely baffling. Luckily, more often than not, once the initial panic subsides you realise you’re standing in balance on a steep slab so have plenty of time to think about what to do next. This of course is a double edged sword; if you can stand in balance working out the next sequence of moves, it also means there’s no sense of urgency so if you don’t like the look of what lies ahead it’s very hard to get started again. In other words, you can quite simply grind to a halt. 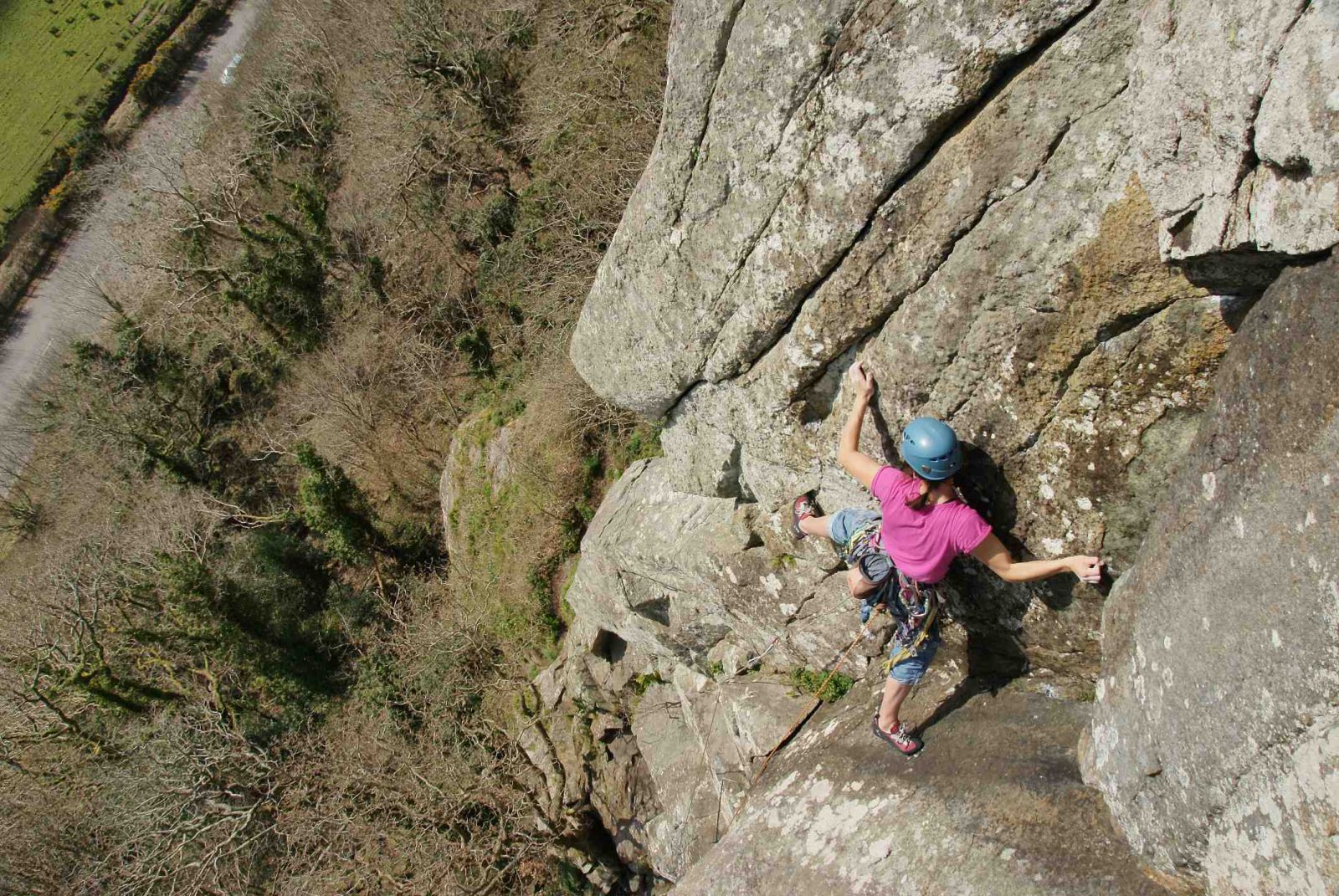 So then, of course, it’s a case of being brave enough to set off on the sequence of moves you’ve decided on. Dolerite sequences do require commitment; falter part way through and you find yourself in a precarious and terrifying no-man’s land of can’t go forward, can’t go back. Time and again you have to remind yourself that you’re on a slab and should be in balance and therefore don’t need the huge handhold you crave.

Easier said than done, but the upside of this psyche up and commitment is that once you’ve successfully completed a tricky section of climbing there’s a huge sense of satisfaction.

Other sections of dolerite cliff are blocky and the climbs weave their way cunningly beneath, between and even sometimes over the overhangs the blocks create. On these routes you need to expect the unexpected; be happy to make blind reaches and now and again pull hard.

How to get gear in dolerite

Once you get your eye in you find the most perfect nut placements in the world on dolerite; tapered rough cracks that were surely designed with this particular job in mind. Quite often the exact size isn’t crucial; you just aim vaguely for the right width and say ‘yeah that’ll do’ without having to fiddle away. Cams are also effective on this high friction rock, which has plenty of parallel sided cracks but don’t relax too much as there is also a tendency for the rock type to create shallow seams that defy all attempts to seat a nut in them.

How is dolerite formed?

Dolerite is an igneous rock type, similar in origin to rhyolite but with a composition closer to basalt as it contains a higher proportion of iron and magnesium, giving it a darker colouring. It typically forms slabs and blocks and the varying crystal size and exact chemical make-up determines its roughness.

The blocky nature of some dolerite cliffs is a worrying feature of its construction. Many of the blocks are inherently loose, even the big ones. It’s still possible, for example, to walk across the worn holds of the crux of a once popular VS called Fandango, which now lies on the approach path to Pant Ifan at Tremadog. Equally horrifying is the ever-widening roof crack of Barbarian on the same crag. Always be mindful that some cliffs are inherently unstable.

Trees provide quick and convenient belays but often cling to their rocky perches tenuously – treat them with love and respect or they won’t be there for much longer.

A special mention goes to the translucent slugs at Tremadog after rain – I’m sure they have a proper name and important role to play in the ecology of the nature reserve but that doesn’t make them any more attractive when they’re occupying the same handhold as you.

Libby has been climbing for over 20 years, she is a qualified Mountaineering Instructor and British Mountain Guide and is the author of Rock Climbing – Essential Skills and Techniques published by MLTUK and Get Out On Rock – the definitive instructional DVD. Her base is NorthWales from where she runs the guiding outfit Llanberis Guides (info@llanberisguides.com).