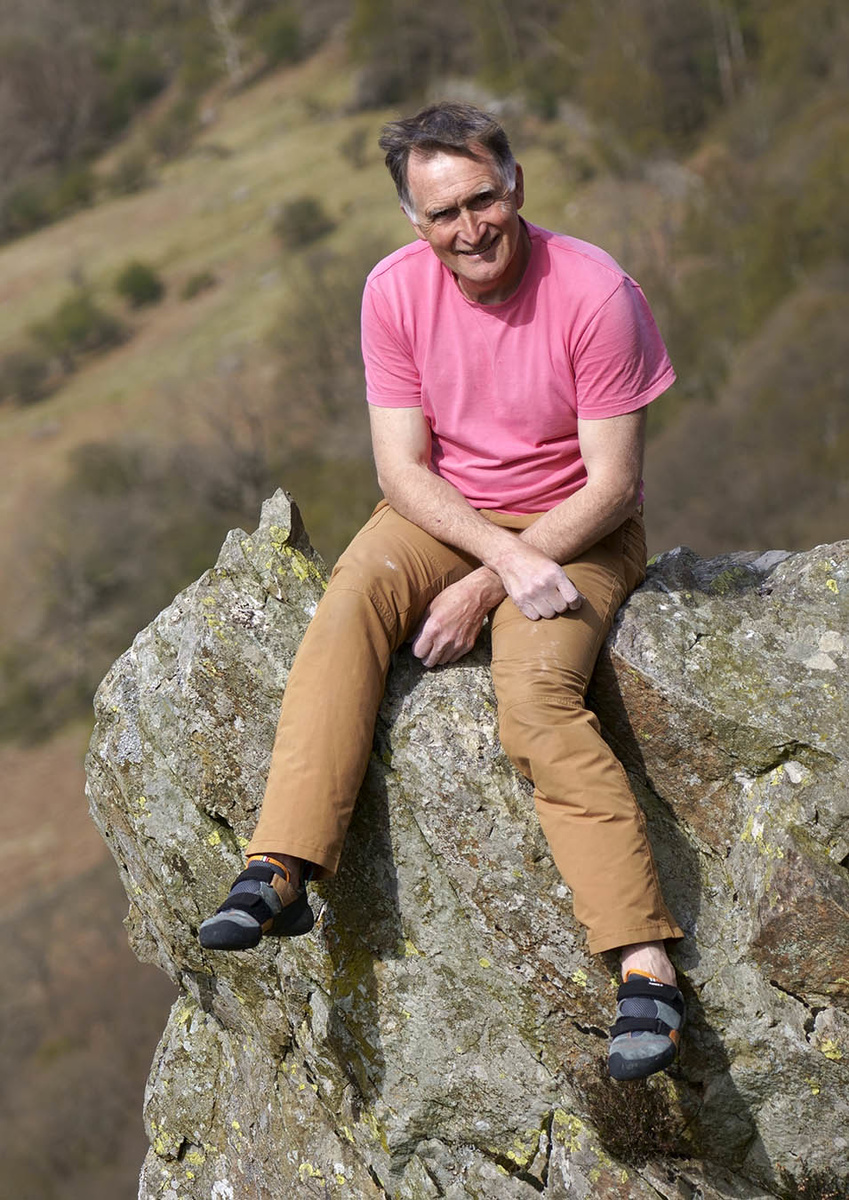 Nick Wharton has been climbing at a pretty high standard for the past 40 years. He began climbing while at boarding school in Lancaster and tells tales of escaping over the school wall at weekends and climbing up the school buildings during the night. Nick moved to Kendal in the early 1990s and his exploits and legendary enthusiasm are well-respected by climbers in the Lakes.

Nick has recently self-published a book – How Hard Can It Be? – recounting his climbing adventures and wider experiences of participating in many other activities including ski mountaineering, cutting-edge kayaking, caving and challenging biking.

Acknowledged as one of the UK’s boldest climbers, Nick talks here to Steve Scott about climbing, risk and his positive approach to life. With a strong aversion to the beta headpoint Nick’s climbing CV includes ground-up flashes of a long list of E6s around the country and his own route Road Rage (E7 6c). He is also well-known for climbing multiple hard routes in a single day sometimes at different crags – for example on the Aberdeen sea cliffs he led six E5s in one day (one has subsequently been upgraded to E6). This sense of energy, along with his positive ‘can-do’ mindset is characteristic of his approach to life.

You seem to prefer trad, what is it that draws you to trad climbing?

Trad climbing is what I grew up with. I think it offers so much more enjoyment and adventure than sport climbing or bouldering. The days out and routes are far more memorable as they draw on more than just the purely physical, sometimes mechanical act of climbing. I am also better at it than sport. I have never really got into the mindset of working a route to death until you can redpoint it. My best on-sight of a sport route is a F7c whilst my best redpoint is only F7c+, which suggests not really getting into the spirit of sport.

There are very few sport routes that I can really recall after the event whilst I can clearly remember many great experiences on trad routes. I can enjoy days out on the bolts and have had many great times on sport climbing trips abroad, but I would see sport climbing as a means to end rather than an end in itself. Recently I have been helping out the Cumbria Bolt Fund by putting up some new sport routes.

What is your best trad experience?

The best route I have done still has to be Skinhead Moonstomp, a tough E6 at Gogarth. I climbed it on a beautiful day on a May Bank Holiday trip to North Wales with some great friends. The day before we had been on Cloggy and I had done A Midsummer Night’s Dream amongst several other routes. It was a perfect afternoon at the world’s best crag, climbing above a calm sea with the sun shining. The route was totally absorbing with the potential for a massive fall, but it flowed really well and gave me a fantastic sense of achievement.

You seem fearless. What makes you climb so boldly?

That is just a perception held by others and how they see me in comparison to themselves. I would say that I am just better at knowing how far to push it – which is a bit further than many others. But I’m not reckless with it, be clear – I have no desire to get hurt, any more than the next person. There is one form of ‘fear’ that has held me back occasionally and that is a fear of failure. The overwhelming concern that if I set off on a crux sequence, I might mess it up and thereby fail, so it is tempting not to set off in the first place. Sounds ridiculous I know but there you are.

“Don’t let self-doubt hold you back.” How do you think climbers can improve their self-confidence?

This ties in with the ‘fear of failure’ issue so I can understand the problem that people sometimes have. I just wish that people would trust in their ability and their strength. They also need to trust the protection they place, which in many cases is just as solid as a bolt. Be prepared to fall off. I find it so frustrating that some people I have climbed with who are SO strong yet don’t use their strength when climbing trad routes. With all the walls, training facilities and the know-how around training that is available today climbers have never been stronger – so why aren’t they performing better when out on trad crags? 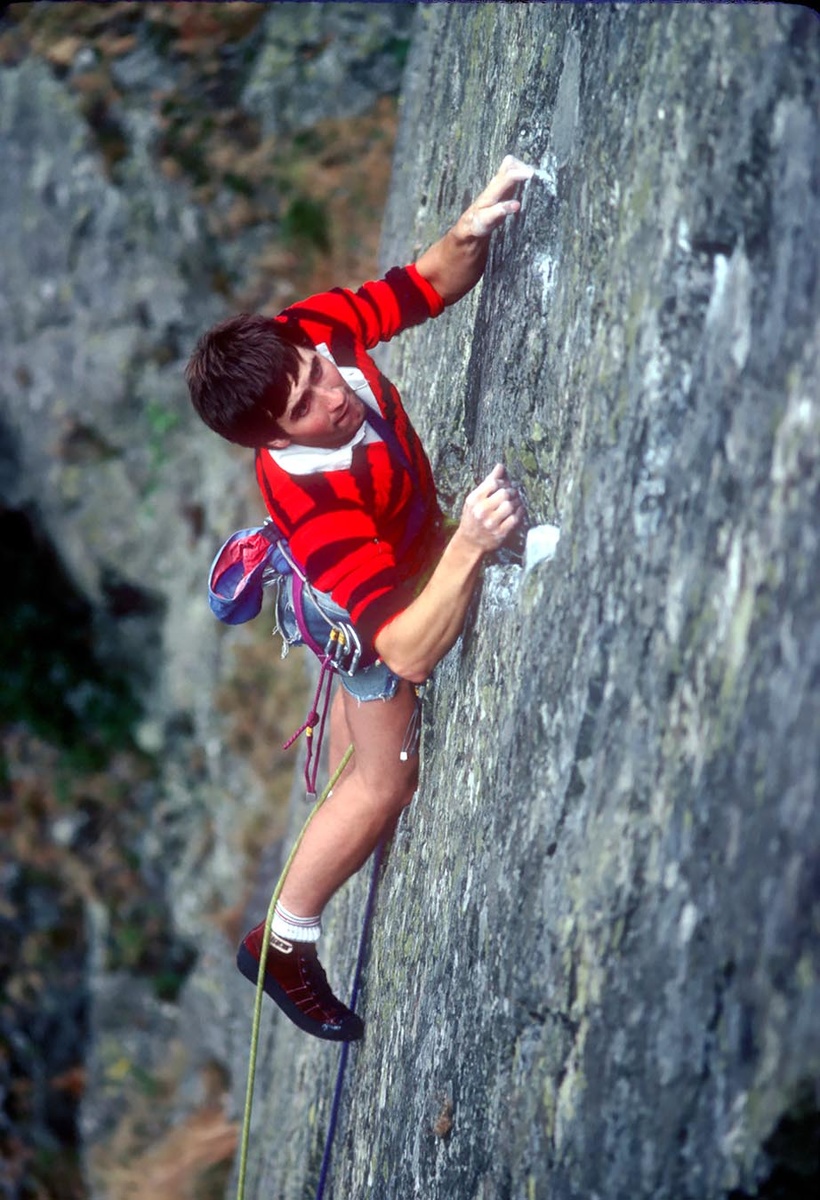 What are your thoughts on the current state of climbing in the UK?

I think it is fantastic that so many more people now identify themselves as climbers. There are many more people enjoying the different disciplines of the sport, which has to be good for all of us. Whether that is those who only ever climb indoors, boulder or climb on our biggest crags. As long as they are enjoying themselves, I am delighted for them. When it comes to trad climbing, I do see people out on the Lakeland crags, yet they are often concentrated at the same few, popular locations.

I also get a sense that most people are climbing at a relatively low grade. Clearly there are those who are pushing the upper limits, but the majority seem to be climbing less hard routes than, say, 30 years ago. I can remember many occasions, going to a big crag and there would be many teams climbing E4s and E5s. I don’t want to sound like an old fart, harking back to the ‘good old days’ but 30 years ago a lot of people were on-sighting E5 and E6 – it was just the way you did those routes. I get the impression that the on-sight grade hasn’t progressed, except by a very small minority of elite climbers. It just isn’t seen as the way to approach routes these days. It seems that it is all about trying to tick an even bigger number and if that means taking a sport approach and practising it – that is fair game.

You have taken part in many other demanding pursuits – the hardest cyclo-sportives; running dangerous rivers; caving and demanding fell-running. What drives you to experience these activities?

They are all just good fun. If I am going to do something I will try to do it to the best of my ability. I can see no point in only doing something half-heartedly. So, when I set out to run the Bob Graham Round it wouldn’t be enough to scrape round in 23 hours 59 minutes. When kayaking I tackled all the hard rivers and ended up paddling some tough rivers in Ecuador only nine months after getting in a boat for the first time.

What made you want to write your book?

I have read many other, similar books and have always thought that I had some good stories to tell. When Mark Radtke, a friend of mine who I would say is similar to me in many respects, published his book Canvas of Rock, I realised that I too could write one. So, when I had nothing else to do during lockdown last year – I got on with it. 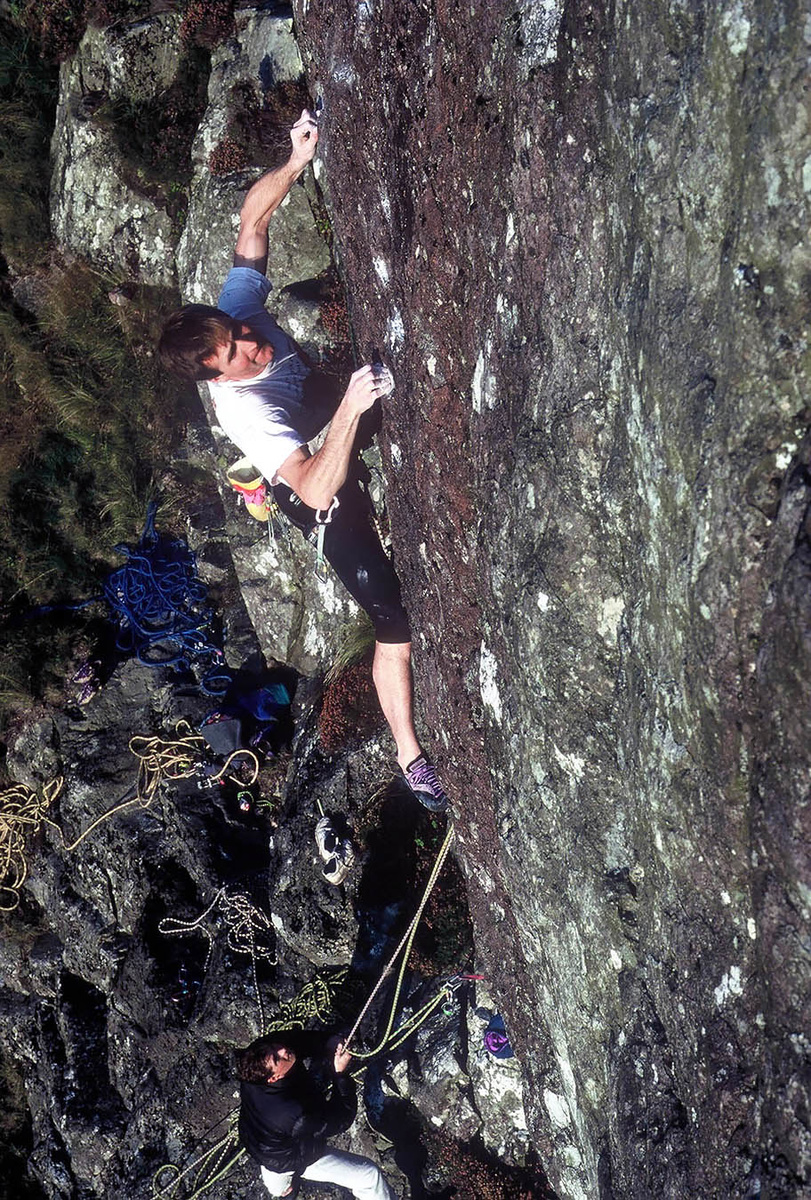 Your writing is nuanced by a strong sense of enjoyment. How do you think this influences your climbing?

I gain a lot of enjoyment from climbing and being out with friends. I gain most enjoyment when I am climbing close to my limit, whatever that is at any given time. This is what makes climbing so great – anyone can have that same feeling, whatever their limit is – VS, E3 or E9 it doesn’t matter, if you climb at your limit, you get the same feeling – so long as it really is your limit.

Which other climbers would you say have inspired you?

I think we probably all gain some inspiration from other climbers around us – in different ways. There are certainly one or two people that, if I hear they have done a particular route, that will inspire me to go and do it as well. In a more traditional way, Pete Whillance is someone for whom I have always had huge respect. I have often sought out his routes to climb as they tend to suit me well. I believe it was another Pete, Pete Livesey, who did the most to drag climbing into a new era back in the 70s. We used to call in and see him in his café in Malham. He left a huge legacy when he died, far too soon.

The impact of others, including your family, seems to be a strong influence in shaping what you achieve. Why are these relationships so important?

Karen, my wife, is very understanding. She knows how important climbing (and at times other activities) are to me and that these activities make me who I am. She has never wanted to get in the way of me being myself. It is great to see Flora, my daughter, have her own adventures and be so successful.

In what way has approaching 60 altered your goals?

Not in any way at all. I still want to climb better and harder than I am currently. I have a list of routes I would like to do and I will work towards those. I now understand how important it is to train specifically. A recent challenge that I have set myself, which has given me a focus, is to climb as many of the three-star Extremes in Lake District Rock – the FRCC selected guide. There are 250 of them and I still have around 50 left to do. Some I am realistic enough to recognise that I won’t get done e.g. Breathless at E10 is obviously beyond me and some of the other hardest routes.

How do you train, physically and mentally? 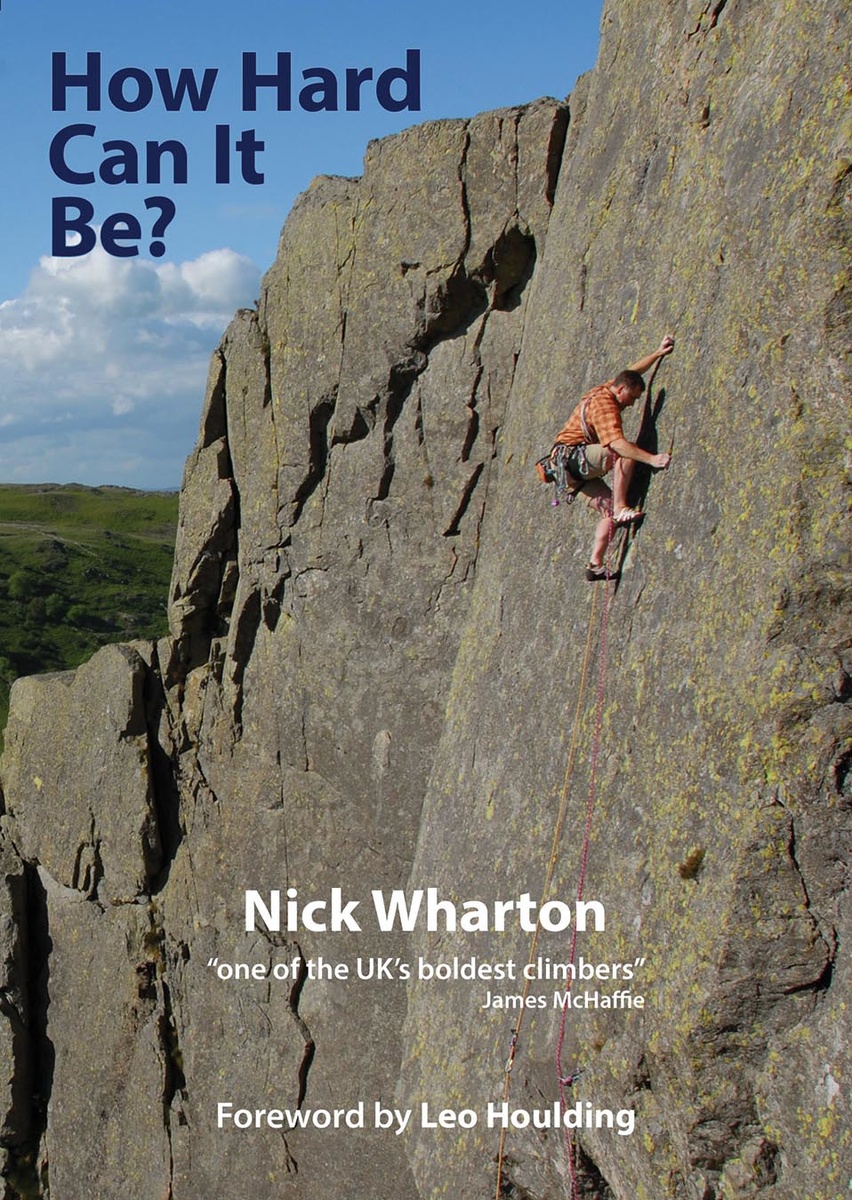 One of my great regrets is not really understanding the nature of proper training much sooner. I use the climbing wall in Kendal – more leading than bouldering. I also use the fingerboards and campus board in the training room at Kendal plus this year I have been doing some old school traversing on the bridge at Sedgwick – great for finger strength. As for mentally – hmm, not sure that I do. I have done plenty of yoga in the past which helps with staying calm but other than that I think the answer is just to not over-think situations – just get on with it.

How does someone who works in Health & Safety, advising businesses how to stay safe, reconcile taking the risks you do?

I know some people see this as a bit of an anomaly but actually, I think my professional life helps me push the limits of my climbing. I believe I have a very good understanding of the concept of risk – better than most. Too many climbers, particularly these days, hold themselves back because they perceive the danger to be greater than it really is. Climbing is a great exercise in risk assessment. Some climbers are too risk-averse for their own good. Just as in the workplace, where I have explained on many occasions, safety isn’t about stopping you from doing things – it is about enabling you to do things up to a certain point beyond which someone will get hurt. The trick is having a good handle on where that point is.

Nick’s book is available through his website www.nickwharton.co.uk or from climbing shops and bookshops.