Back in 2000, with only the second ascent of the late Wolfgang Gullich's classic Frankenjura test-piece route Action Directe (F9a), the Basque country climber Iker Pou announced his arrival on the stage as one of the world's strongest sport climbers.

Iker's talent had always been obvious – climbing F8b+ as a teenager and then making more than 70 ascents of routes between F8c and F9a over the following years. An obvious path would have been to continue along that road, bagging the hardest bolted routes at crags around the world but a love of the mountains, nurtured as he grew up with his brother Eneko in Northern Spain, spurred them both on to bigger and greater adventures together. 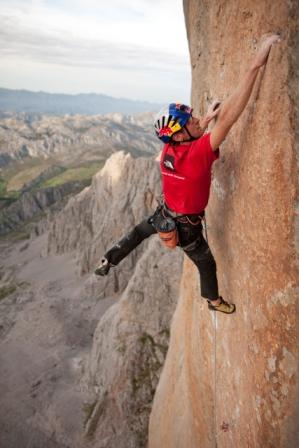 Iker Pou on the 5th pitch of Orbayu (F8c+/9a) on Naranjo de Bulnes in the Picos de Europea in Spain.

While also a talented rock climber, Eneko was a born mountaineer with a love of ice climbing, alpinism and ski touring, becoming a member of the Spanish Young Mountaineer Team. This passion quickly led him to Greater Ranges expeditions to Annapurna and Ama Dablam as well as extreme ski descents in the Pyrenees and Spanish Sierra Nevada.

Seven Walls, Seven Continents
And it was the lure of the mountains and remote places that was the catalyst for the amazing Pou brothers climbing partnership. The spark was Eneko's idea, in 2002, for them both to undertake a challenge climbing seven big walls on seven continents. "When Iker did the second ascent of Action Directe he can be the best sport climber in the world because he's really strong. But we decided we cannot stop at sport climbing. There's a lot to do in the mountains. The adventure is not in sport climbing. This is a place for trad climbing and ethics," explains Eneko.

The 'Seven Walls, Seven Continents' challenge kicked off in 2003 in the US with the second free ascent of the 850m route El Niño (F8b) on El Capitan in Yosemite  and then Zunbeltz (F8b+) on the Naranjo de Bulnes in the Picos de Europa in northern Spain. 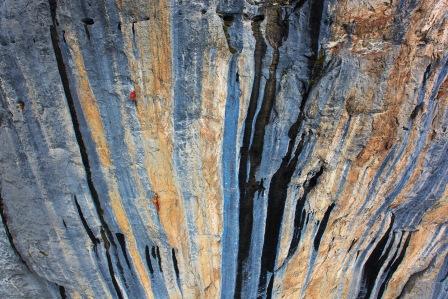 It was the lure of adventure rather than a challenge to simply climb harder that attracted the brothers. "Most important for us is the adventure," says Eker. "Some professional climbers are only choosing grades...if you love mountains all your life you have to feel from the heart."

The adventure lasted for four years, and also included the first free ascent of Bravo les Filles (F8b) in the Tsaranoro massif in Madagascar, the Totem Pole (F7b) off Tasmania in Australia, Eternal Flame (F8a) on Trango Tower in the Pakistan Karakoram where they narrowly failed to free every pitch, and a free ascent of Supercanaleta (F6c/ 90º/ M5+) on Fitz Roy in Patagonia.

The challenge fittingly culminated on Christmas Day 2007 with the first ascent of a new peak of the 'Three Pigs' on the Antarctic Peninsula via a brilliant new 760m route, Azken Paradisua (F7a/ 90º/ M6), in a stunning one-day push that saw the brothers climb the wall in 13 hours.

For both brothers it was the highlight of the whole challenge. "When we went to Antarctica we needed to find a good wall and after one week we found one. It's not the hardest in the challenge but it is the most adventurous – one push in 24 hours," explains Iker.

Orbayu
Not ones to sit on their laurels, Iker and Eneko then turned their attention to their hardest project yet, a bold new overhanging 500 metre 13-pitch route up the West Face of El Naranjo de Bulnes in the Picos de Europa. Not only was the route technically hard with a crux pitch of F8c+/9a and several pitches of F8a/8a+, but there were huge unprotected runout sections with 25 metre fall potential just to make it that bit more spicy for the brothers.

Initially the crux seemed so hard that the brothers wondered if the route would even go when they looked at it in 2008. "In the first moment we try it and it's impossible. We cannot do the route. But it's our baby, it's our project. It's a little bit magic," says Iker. But they returned to the project in the summer of 2009 and although the ascent was in doubt right up to the last week of working on the project, Iker and Eneko finally made the first free ascent of Orbayu (F8c+/9a) in eight hours. The brothers claim this is the most important route of their career. "It's the creative moment," says Eneko. "When you get something very near your top you find something very interesting. It is a super-hard route, the level is fantastic."

Style
The style of ascent and the goal of climbing routes free has also been a constant factor in the choice of projects for the Pou brothers. "If you lose the ethics in the mountain we are just another sport. If you lose that it's just an exercise," says Eneko. 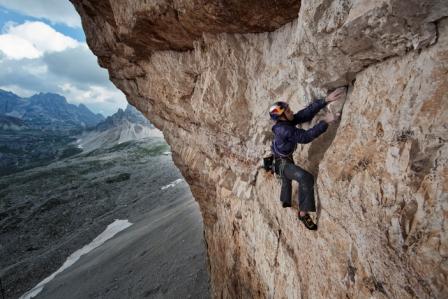 The strong bond between Iker and Eneko is obvious when you hear them talking so passionately about climbing and the mountains and Eneko says there is no competition between them. Eneko says of Iker: "I have climbed with some of the best climbers in the world and Iker is one of the best and super-motivated." Iker's description of their partnership is perhaps more accurate. Laughing, he simply says: "Eneko is a very good climber. He is Attila and I am Napoleon!"

'Alpine Trilogy'
It's also been another exciting year in 2010 for the Pou brothers. In the summer they completed an ascent of legendary Italian climber Maurizio 'Manolo' Zanolla's four-pitch, wall climb Solo Per Vecchi Guerrieri (F7c, F7b+/7c, F8b, F8c) on the south face of Vette Feltrine. The 150m route, which translates as 'For old warriors only' took the brothers four days to complete, with the Dolomite weather hampering their efforts. Iker was forced down by rain after just one pitch on the first day and rain again interrupted play on the second day three pitches up. The brothers managed the entire route on the third day but they were forced to wait for three hours in the wet and cold at the belay for the wall to dry out.

They then repeated the classic hard Dolomite route Panaroma (F8c), which crosses the roof on the North Face of Cima Ovest di Lavaredo and was first freed by Alexander Huber in 2007. The Pou brothers achieved a free ascent of the route over three days. 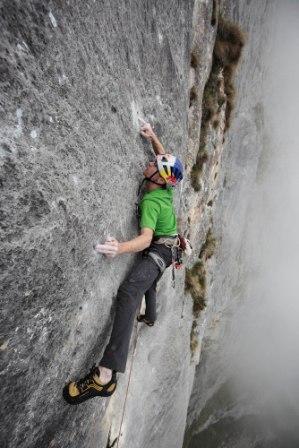 To cap another remarkable year, Iker and Eneko then followed that up by repeating the eight-pitch route Zahir (F8b+) in the Wedenstocke, Switzerland. The route had the usual Pou trademark of bold and committing climbing above spaced out bolts.

What about the immediate future? The brothers are keen to continue their climbing partnership and push even harder – "now we want to try F9b", says Iker. And beyond that? "We hope when we are 80 years old we are working in the mountains," laughs Eneko.

Orbayu - The hardest free big wall climb in the world? 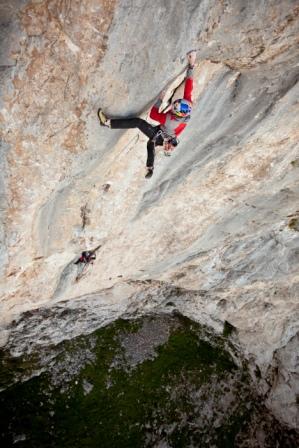 Here's the Iker and Eneko's own pitch-by-pitch description of the hardest new route of their career to date in the Spanish Picos de Europa.

Pitch 1, F8a+, 38m, 6 bolts: A few moves on fragile holds to begin, followed by a bouldery move, then continue to the chain.

Pitch 4, F7a, 25m, 3 bolts: Hard bouldery sequence to start, keep it together with the gear far below, another hard move and some technical wall climbing up to the chain.

Pitch 5, F8c+/ 9a, 37m and 2 new bolts for the free variation: A first section of around F7c+/8a of technical climbing, a bouldery sequence of F8a+/b (boulder), and a final section on monos and two finger pockets at around F8b (sport). The first and last sections are protected by copperheads, pitons and small wires sunken in by potential falls of up to 20-25m.

Pitch 6, F8 a+, 30 m: Protected by some very old and oxidised bolts. The first hard section is protected by copperheads, continue on to another bouldery sequence and then easy climbing.

Pitch 11, F5+ 60m: Linking the two pitches of the Rabada-Navarro. Friends and pitons.

Pitch13, F5, 45m: The final pitch on the face of the Rabada- Navarro to the top. Friends and pitons.