A fantastic climb, with a great top pitch, Yellow Edge is a must-do E3 in the Avon Gorge, described by Mark Davies.

“Right then Mark,” the stern Glaswegian voice announced. “Here we are – off you go then!” Eh? What? No warm-up? I guess that’s the pay-off when you climb with someone for whom an E3 is the warm-up. “You do the first and last pitches – I’ve led them loads of times and I’ve never led the middle pitch.” Right, so I get to lead both the technical and the psychological cruxes, at least I don’t have to lead the cheese.

So there I stood, at the foot of the towering wall with the fume-emitting drone of the city-bound rush hour traffic backing up on The Portway just a few metres away, thankfully obscured from their staring faces by the bushes; the last thing I need now is an audience. If truth be told, in my morning state of general malaise it was all looking rather improbable but then there’s always that ego pressure to pull yourself together when you’re climbing with a relatively new partner; especially when you’ve told them that you’ve just recently led Left Wall, Vector, White Slab and The Strand on a trip to Wales. “Well if you’ve done those then you’ll be fine on this.” (Even though I failed to follow First Blood in Pembroke?)

Once past the initial shale ledges, the first pitch is standard Avon fare, quarried weird-angled, sloping (but thankfully grippy) dark grey limestone with big run-outs between a random bolt or peg; characteristics that I was forced to get accustomed to over the last 10 months since my somewhat reluctant relocation from Sheffield to Bristol. God how I missed the beautiful Peak District but at least at Avon, once away from the nightmare polish there was a similarity in balance and hand/foot smearing techniques that could be applied (but unfortunately, without the comforting perfect cam placements of grit).

So you reach a bolt, and moving left past it, constitutes the technical crux of the route; I had to try this quite a few times before I could persuade my mind and body to commit to the peculiar part mantelshelf part layaway move. Wow! I got it, 5c without a warm-up, yeah, that’s the hardest move done then.

Up a groove, boreholes, pumpy moves protected by dodgy pegs, I reached the first stance – a big comfy ledge with bolts – I was feeling quite pleased with myself but I knew the true character of this route had not yet revealed itself. This was the warm-up, the notorious weird crumbly rock and the terrifying finishing ramp were all still lying in wait. 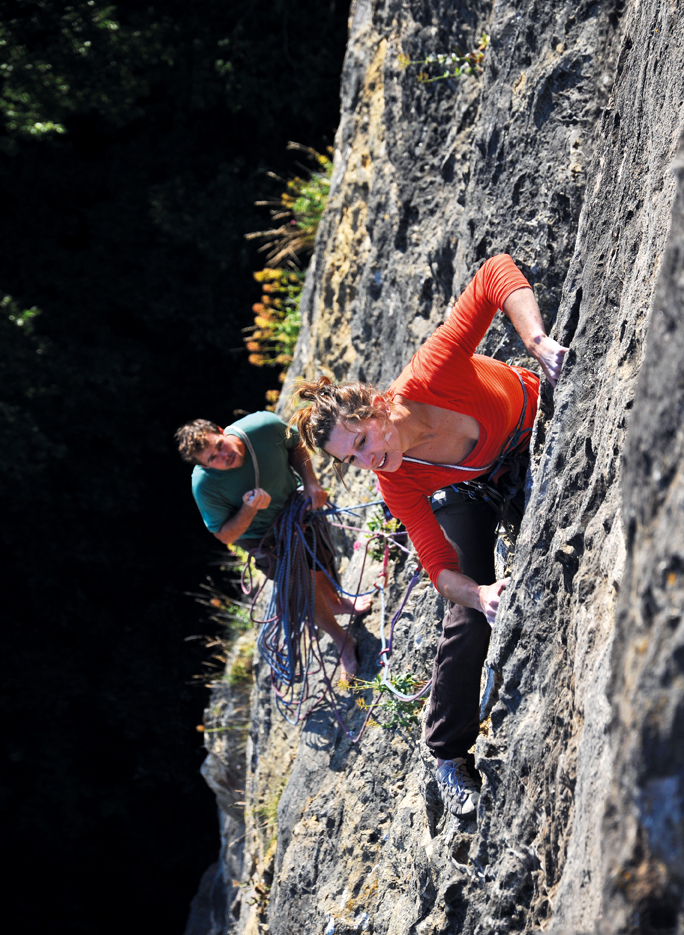 Tucked away at the far north end of the Avon Gorge, The Exploding Galaxy Wall (at one time also known as The Psychopath Way and The Great Unclimbable Wall) did not gain its first route until 1971. Its rotten red and yellow walls repulsed the Avon aficionados until a 19-year old Tony Willmott, heavily influenced by the music and drugs of the time, became seduced by the wall and armed with a stockpile of metalware aided his way up the wall to produce Amanita Muscarina (at XS A5). A year later Ed Drummond used two aid points to produce the parallel line of Haystacks. Three months passed and Terry Gloag found a logical way of linking the easier sections of these two former routes to produce Yellow Edge with just one point of aid (eventually eliminated in 1973). An instant classic was born with an instant reputation as a death route. Over time the route has become something of a trade route and a rite of passage for all Avon suitors and, although its reputation as a death route has been tamed, it does still have a reputation.

So there I now sat on my eyrie with the enormous unsettling wall of doom above me, looking down on the suddenly empty road, the image of the rush hour passengers now settled into their safe city routines, the well-oiled cogs of society. What on earth was I doing there? I brought my partner up and he quickly set off up the boulder problem start of pitch 2, clipped the pegs and was along the traverse in no time at all. Up and over and 'safe'. Super efficient, thankfully not too much time for me to dwell on the top pitch. Ropes tight and off I go, a blur of bunched-up traversing, standing on bits of metal, sandy cracks, cheesy rock and a hanging belay on all manner of tat; impatiently I sorted the gear then set off on the final pitch, let's get this over with.

Immediate super fantastic exposure hits as you edge up above the overlap on good holds and spaced but reassuring gear, a tricky bit, and then a bulge that marks the start of the ramp and stops you in your tracks. I had read all kinds of things about the ramp – none too encouraging – the strange, rounded rock, lack of gear and the exposure with the prospect of losing it and taking a massive fall into space. As it steepens, you clip a welcome peg (is this the last gear?), lower your heart rate, settle your mind and off you go; balancing up on sloping footholds, awkward undercuts, big pinch grips on the edges of dishes, all very unnerving. But for some reason (maybe because of my gritstone apprenticeship?) it was easier to deal with than I had feared. There were even some reasonable runners and before I knew it I was pulling up the top to the belay tree.

What a fantastic climb and this top pitch is magnificent, it's what really makes the route. If you are steady at E2 go do it, it's one of those moments in climbing that you will never forget.