The Start of Something New

Some things just creep up on you. Things like age. And responsibility. And that little lip of fat that hangs over your belt that you convince yourself is ‘just skin’. These slow creepers gently squeeze their way into your routine like weeds cracking through thin tarmac. Your unshiftable Sunday, religiously reserved for cragging turns into half a day of pottering: “Got a few things to do in the morning,” becomes the weekly retort. Winter sun spent on Spanish cliffs becomes the family holiday with maybe a day stolen away at a cliff, it becomes hardly worth taking your harness. And the monthly ‘weekend road trip’, becomes: “I’ll come on the next one, definitely.”

I walk along beneath the crag on this green Monday evening. The clocks are still back, but the nights are long enough for me, but no one less local to get to the rocks. The dog bounds along, startling pheasants from the brown bracken and I look to the routes and problems daubed in a familiar chalky pattern that speaks of the frenzy of climbing that must have been the day before, not that I was there. It’s like the morning after the party. The stench of stale booze and the grid clogged with butt ends, the stained carpet and overflowing recycling bin being replaced by dogged discarded finger tape rolls, spilt chalk bucket and banana peel. The letters on my fridge arranged into some pseudo-intellectual play on words remind me of the tick marks which highlight obvious pockets, the daubs that demonstrate the sticky smear. I want to get out my red pen and mark them ‘Must try harder, see me’. Still, both are serene places to be, to walk amongst the post-apocalyptic, to be encapsulated in this aftermath, a comedown from what went before, there’s something special but something sad in that the party is over. I cast my mind back: 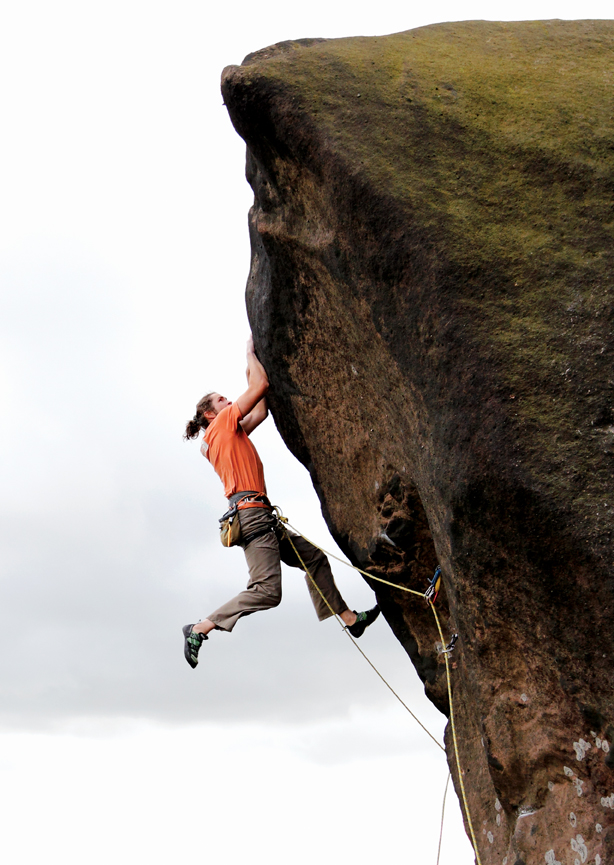 “Driving home on a fresh day in 2000 Mark found himself cooling his hands on the air stream that blasted into his cab through the filthy vents. The sweat on his palms was a precursor to an event, which he knew he now had no control over. In his mind, he was committed to what he had to do and there was not a lot that could change this. You see, Mark is a little different to the majority of climbers out there, his pragmatic approach means he weighs up the actual outcomes and the realities of getting those precious guidebooks ticks. He is one of those who have anted up and had his hand dealt in this game of what has been coined deep play. While many of us may look for excuses to get out of doing ‘that climb’, Mark looks for a reason to get it done and sometimes this can seem a little unwise.

He was going to do a route that evening which he had practised previously and got up in one push from the ground to the summit. He knew he could do it, so what’s the point postponing the procedure? Mark nipped into his house and changed out of his grubby work trousers into a pair of equally tarnished climbing trousers. He grabbed his lurcher – Poppy – scooped up his fluorescent pink climbing bag and shoved an apple in his mouth, which he held there until he got in his car. Mark set off to the crag, changing gear between bites at his apple and steering with his knees when he finally decided to put on his seat belt. Upon arrival at the rocks, he had no pangs of fear, no thoughts of ‘maybe next time, when it’s a bit cooler/I’ve got a spotter/first-aider/top-roped it a few more times/got fitter/new boots/worn-in boots…. He soloed Rocking Stone Gully (VD) and then got down the point at hand. Mark didn’t want people thinking he was lying after his very solo ascent of the route so he’d brought his video camera with him. He set it up, pointing it at the route by wedging it in his shoe and hit record. At 25 feet the crux is encountered, a smear out on the right is committed to and the rounded top delicately grasped.

A fall from the crux should leave the climber smashed in the boulders at the bottom. The blessed bouncing idol of the 80s – Johnny Dawes – famously fell from this crux on an on-sight attempt and managed to skip down the slab, avoid the boulders and was then snagged by his shoelace before the final catastrophic drop. Falls from this point by other climbers were decidedly less fortunate.

When Mark arrived at the crux he glanced round to see Poppy staring up at him, standing directly in front of the camera. So, he calmly reversed the tenuous smearing moves back down to the ground, threw the dog a stick and then pulled back onto the rock and topped out, all of which was caught on film. Mark had been climbing for a little under two years and had just succeeded on Piece of Mind, his first E6 solo and the first of many.

Mark is my belayer or as perhaps you might put it, my climbing partner. A climbing partner is so much more than just a belayer. It’s the one who shares your day out, who shouts encouragement, who shouts you a beer (yeah, right!) or who would carry you down from the crag, should you need it. In his heady early days of climbing, the partnership was not readily reciprocated. He didn’t need a belayer, he would solo it alone if he wanted and his preferred taste in climbs were slabs, so a Shunt would be all that was required for a pre-practise. His list of early ascents was often in this style. Judge Dread (E6 6b) is a huge slab-cum-wall on the lonely Nth Cloud which rests on the side of The Roaches upper moorlands. Afraid that he might land on his beloved Poppy who was now starting to annoy his master by pacing around at the bottom of the route, Mark again used his favourite trick of throwing a stick to distract her. In stark contrast to his previous ascents, Mark had a moment of blinding clarity and thought what a good idea it would be to give Justin a text: ‘Gonna do JD now. If not called in five mins then not good. Shaz’.

Upon reaching the top he was so pleased that he packed his stuff and headed back home. Safely home in his kitchen and suddenly the dreaded thought washed on to him like a cold shower – Oh no! I’ve not told Justin I’m safe. Panicking that the air ambulance had already been sent for, Mark scrambled to his phone and quickly called Just. No answer... Still no answer... then a croaky voice answers in a yawn, “Yup.” Mark explains that he’s done it and he’s safe but Justin didn’t have a clue what he was on about, it was two o’clock in the afternoon, an hour or so before he normally drags himself from his sleeping pit. On another occasion he decided that he would solo Never Never Land (E6 6b), Simon Nadin’s scooped steep wall to the right of Ramshaw Crack, in contrast to placing the only protection on the route, as he thought he’d rather have some photos than a belayer. He reversed the last psycho-crux mantel when he noticed that Martin was holding his camera in a landscape position. “Oi, turn the bloody camera round!” he bellowed at a decidedly ashen looking photographer.

Then he hit what could be coined his mid-life crisis. It’s difficult to say precisely when this occurred. Mark broke up with his bird, sold his GTI and bought a diesel estate and it was definitely somewhere around this time. I always presumed that it would take a nasty and unexpected fall to quell his absolute confidence, and none of us really wanted to be the one there when it happened. But it was a slower process, thankfully. A combination of starting to do routes which were considerably more technical but safe gave Mark his first proper taste of leader falls and also perhaps a realisation that there was less kudos in doing these bolder routes as it seemed that they were getting done by every man and his dog (NB Poppy has climbed V8). Mark began making bold statements rather than climbing bold routes such as he would rather say that he hadn’t done Kaluza Klein – perhaps the people’s favourite first E7 lead up the daunting arête at Robin Hood’s Stride – as it was so passé.

His attitude has swung round completely now and his partnership is 50:50. He’s no longer the single-minded lone ranger seeking and shooting down his objectives, although he still won’t go for weekends away, saying he does enough driving during the week (he’s a trucker, you see). He seems to have had a dawning of realisation. I would now unquestionably call him my belayer. Abruptly it seemed that he had emerged from the tunnel and into the light. His frown lifted, his eyes lightened and he surrendered his heavy metal roots and went clubbing. I can categorically vouch for the fact of going climbing with him these days is significantly less stressful than it ever was.”

But, the turn continued. He tweeted last week ‘went climbing for the first time this year. No spark at all. Was bored within 30 minutes. Is it time to hang the boots up?’ and I realised the party was over. Not that I hadn’t seen it coming, it was obvious in hindsight as it is with so many other climbers I know: my dad managed about a decade. At the top of his game, he was leading E1 and seconding a few grades harder. He still has his boots. Martin, well he did a little better, managing E5, Font 8a+ and F8as to boot in his 14 years of rock addiction, but all have slowly moved away, new interests and pastures new, new adventures. It scares me a little, the thought that it could happen to me, but then I look at them and see how happy they are and realise that there is so much more. Those are the ones who’ve made it in a way, they’ve reached escape velocity and now cruise like Voyager away into the unknown, into other exciting things, things yet undiscovered, and perhaps I feel left behind. Sometimes it makes me think: we start climbing as an adventure, as something different, as something to get us out of the norm, but then it becomes the norm, it longer scares; it’s the thing we do at the weekend, after work and in our spare time. I’m no longer the person who found climbing by doing something different, by getting out of my comfort zone; I’m just a climber comfortably seeing it out.

There’s a gaping zawn left after a partnership fizzles out. It’s the kind of gap which opens slowly, like when a weed tears through thin tarmac. A tiny imperfection which forces a move in search of a solution. Pulling the weed, and smoothing the crack allows temporary respite but no real conclusion. I think someone once said that: “Climbing is about people and places,” if someone didn’t say that, then they should have, although perhaps I’d go one step further and say: “Climbing is about that one moment,” it’s about the person you’re with, first and foremost, then it’s about the experience, whatever that could be. And that experience, the one that really counts is much more likely to have occurred on some unsuspecting evening pottering about than on some incredible adventure. Take pleasure in those blips, they’re the ones that count.

We all still party, but sometimes we need to rethink what we’re celebrating.