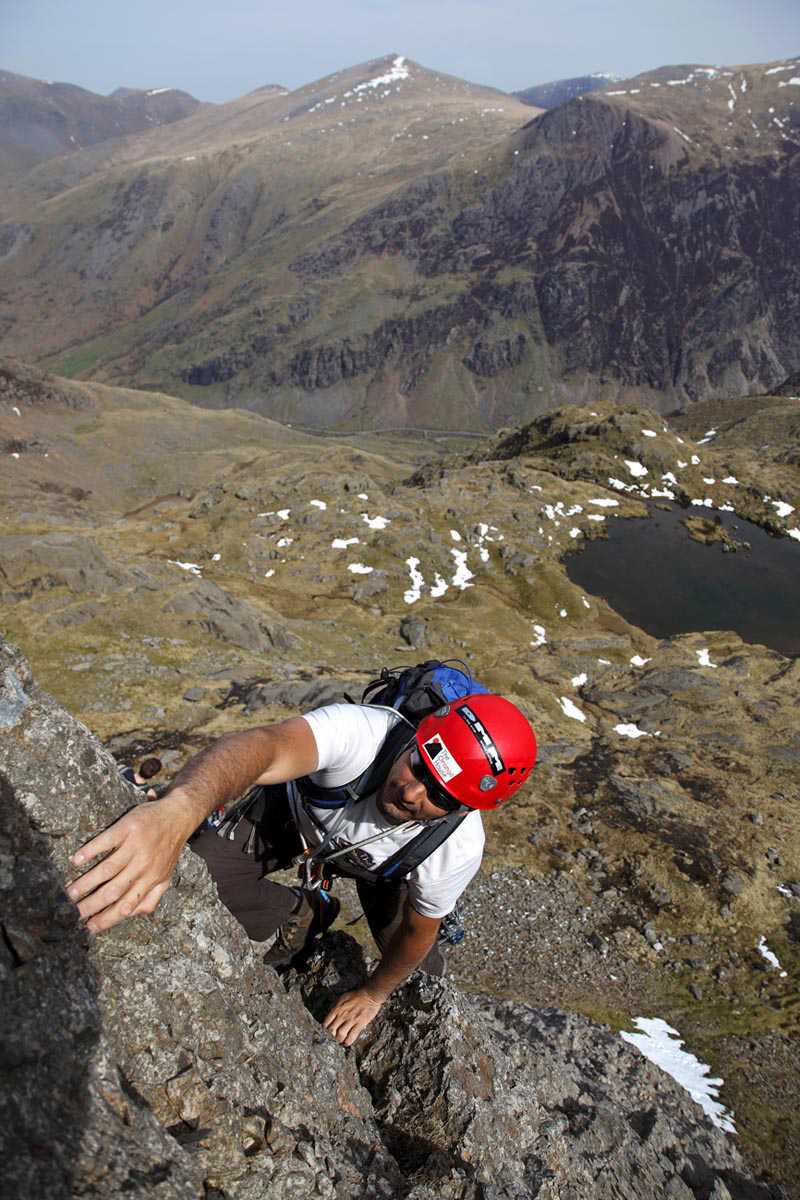 The right-hand section of Cyrn Las, between the main cliff and the waterfall, gave us a short interesting scramble with the only difficult section being straight off the ground. Fine to solo and it nicely broke up the walk-in. The high cirque of Cwm Glas is dramatic. But with all the gullies still filled with snow, I had to remind myself this was Snowdon and not some great monster in the Alps. Rounded and grassed moraine dumps litter the valley floor. The most striking feature is our route which dominates the skyline on the left. This is the most continuous and highest crag and provides some atmospheric easier climbs and scrambles. So the rewards for the walk-in are well worth the effort.

The large flat area of the summit of the Nose was a great place to relax, but the Nose had a sting in its tail. To gain the Northern Gully you have 20 feet of vertical down climbing which is not too hard, and the step at the bottom is really easy if, like me, you’re six foot with long legs. Cunning route finding was now required on the Clogwyn y Person Arête to find the easiest line. But to be honest, it wasn’t worth it, and if you try too hard you'll miss out on some great climbing.

It was all over too soon and a steep walk slowly led us back to the motorway of the northern side of the Snowdon Horseshoe, but you don't have to stay on it. The weather was so nice that we did and scrambled over Crib Goch then continued down the ridge back down to Cwm Glas Mawr. It seemed a fitting and just way to cap a memorable day in the Welsh hills. In conclusion, this classic Diff is situated very high on the northern slopes of Crib y Ddysgl and can offer a great alternative to doing Snowdon. It’s far from the madding crowds of a busy Bank Holiday weekend, the difficulties are short, well spaced and interesting and the rock is mostly solid even though it appears somewhat fractured and loose from the start.