Tom Newberry introduces the story of Mikey Cleverdon and his recovery from a life-threatening illness.

Tom: Mikey Cleverdon’s story is one of a classic comeback, a ruthless, yet inspirational, determination to overcome a merciless knock of the sort that life can sometimes throw at us… Aged only 27, Mikey suffered a stroke, whilst doing what he does best; up a rope setting a demo route for none other than Chris Sharma. I spoke with Mikey to find out more, and see if we could all feed off his optimism and apply his philosophy to our own issues.

The word ‘stroke’ sounds so harmless, a synonym for 'caress', however, the old English origin offers a more accurate interpretation: 'a blow' and 'a calamity'. There is no escaping the impact of a stroke; along with cancer and cardiac disease, it is the most common cause of death in Western countries. In fact, someone suffers a stroke every five minutes in the UK. For those who survive, over half will be left with permanent and severe disability. The consequences are a horrifying catalogue of damage that includes personality changes, impaired sensation, paralysis, language problems, deafness, blindness, memory loss and seizures. Yet these disheartening facts didn’t deter Mikey’s spirit, his objective: to return to form, back to climbing in the 8th grade in just 365 days.

A well-known face amongst climbers in the south west, Mikey is a keen developer, coach and route setter who, for the last decade, has been crucial to the rise of standards in the region. Mainly known for his developments along the north coast, he has also added a number of hard test pieces to the moorland tors, many of which demonstrate Mikey’s characteristically powerful and wild climbing style. None demonstrate this more than his superb roof problem at Burrator, Jungle VIP (probably the most popular V11 south of the Peak). However, it is his incessant broad smile and distinctive laugh which have been valuable assets to the local crags and climbing centres. Maybe, his exuberant energy and pounding positivism are the secrets to Mikey’s inspirational and remarkable recovery. 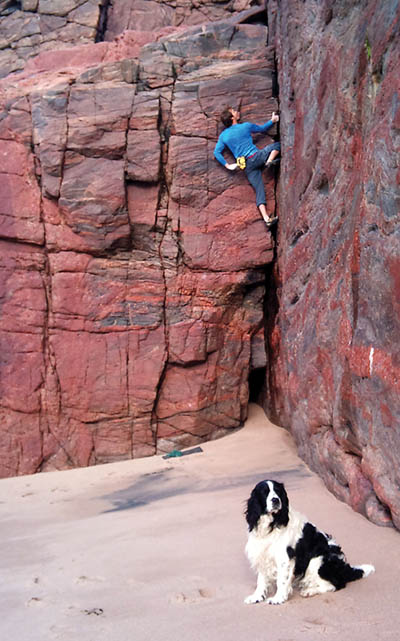 Mikey: The day of the stoke was an exciting occasion, I was setting routes for a Chris Sharma demo at the Quay Climbing Centre. After a morning’s work I had a headache coming on, but decided to head up the rope to attach a couple of holds before stopping for lunch and Paracetamol. As I attached the second hold the whole world seem to go upside down. All I can recall was struggling to hold my Shunt whilst trying to lower myself. Once I reached the ground I couldn’t hold my weight, just slumping to one side. Every time I attempted to sit up I would buckle over again. After that, I only remember a lot of confusion. I was very much in a strange and unexplainable place waiting for my girlfriend to come and pick me up. Strangely though there was no pain, if anything I was happy and giggling, I was in utter bliss.

The chances of someone my age having a stroke are extremely rare; under 30s make up only 0.7% of stroke attacks in the UK. My stroke occurred due to an AVM (arteriovenous malformation) – basically a knotted mess of blood vessels, veins and arteries in the left side of my brain. This created an aneurism which burst. The stroke left me with several severe side effects, both mentally and physically. I often feel very emotional bursting into tears out of the blue. Physically, half of my body feels completely different to the other side. Simple day-to-day things like being in the shower provide strange sensations, as the water running over me feels totally different on one side from the other. Accompanying this is a lack of mobility and strength on my right side. Initially this meant I struggled to talk and couldn’t walk. In fact, I couldn’t feel anything in my right side meaning I struggled to hold anything in my right hand, I couldn’t tell if something was touching me, holding my hand and had no sensation to pain. As some sensations started to return I had to relearn what they meant, causing many a funny moment. For example, applying shower gel to my hand gave me the same sensation as putting my hand to close to the fire; this meant I would snatch my hand away as if it was painful.

Unfortunately, due to the complication of the AVM, I wasn’t allowed to undergo the usual intensive physiotherapy to help re-create the neuro-pathways that enable you to regain complete control of your body. Ideally this takes place within two weeks of the stroke as the likelihood of being able to recreate these pathways reduces dramatically after time. As a result, two years on, I am still left with no sensation in my right foot and lower leg, I have hearing issues in my right ear, I still lack mobility on my right side, I suffer memory loss in particular trouble with short term, as well as concentration and communication issues. However, the most frustrating side effect is the heavy fatigue I suffer from. Walking in busy places, particularly supermarkets, is where I suffer the most and within 20 minutes can go from an apparent fit young male to someone who looks like they have just consumed an entire bottle of Jack Daniels. Nowadays I have to plan everything and be prepared to drop things at last minute if I simply can’t manage, which unfortunately happens quite often. In a nutshell, I feel like I’ve aged by 20+ years overnight.

Oddly, my ambitions are set higher now than prior to the stroke. I want to and feel I can climb harder than ever nowadays. I believe more than ever, it is the psychological that prevents us from achieving our personal goals. After overcoming the initial “it’s all over” thoughts, I started to believe that I could achieve anything; my mind wouldn’t hold me back. Despite at this time being bed-ridden in hospital, unable to walk, I wanted to climb hard again and was determined to do so. I generally have a highly positive and optimistic outlook on life, that’s where I am lucky I guess. Occasionally my mind goes in the completely opposite direction, but I know everything has an opposite and that’s what I focus on when things are down. It’s cliché but you really never know what’s round the corner for you, good or bad, but I feel there is always a balance somewhere. I guess you just have to live every day and try to spend as much of your time doing what you love; that and never give up on your dreams.

It was one of my proudest moments making the second ascent of the superb End is Nigh, four days before the year anniversary of the stroke. My first V11 since the stroke was followed two weeks later by the F8a+ at Anstey's Cove, meaning I had returned to form within one year and 10 days of the stroke. Needless to say I was super stoked.

Returning to 8A bloc and F8a route seemed the most obvious goal to set myself. From what the doctors and physios were telling me I thought it would be highly unlikely, but that made me want it even more. I wanted it to be routes/blocs I had not done before so I could just go through the journey of working something, learning it and eventually sending it, as that process is what I enjoy about climbing. The journey back was hard though; it took six months to get the green light to start doing light exercise again. But when they gave me the okay to start climbing I just went at it ‘A Muerte’. I was so happy to start moving around on rock again, naturally I was inclined to spend more time on steeper terrain, but bouldering hard and knocking myself about was something I was strictly told to avoid; doctors felt that spikes in blood pressure for brief moments could still set off a secondary stoke or seizure. So to begin with I started off with simple traversing and easy climbs, occasionally on good days I returned to my preferred steep and thuggy style but mostly I was restricted to slabs, something I started to resent. I found it hard to get over the frustration of not being able to perform due to lack of strength and, in particular, feeling on my right side, and on bad days still do struggle to remain positive. Not being able to feel footholds I’m standing on has made slab climbing somewhat interesting and on trad extremely scary. It took lots of physio sessions and tedious exercises to regain balanced controlled movement. I combined climbing with other general exercises, taking walks out on the moor and later tackling new activities, such as slacklining. It feels like I’m floating when stood on my right leg, very strange. I have worked up to walking a 25m line now, which is fairly unbelievable and something I wouldn’t have put money on pre-stroke let alone now. More recently I have been following a structured training programme, but still have to be prepared to sack off sessions, sometimes for several weeks at a time, due to heavy fatigue that builds up from everyday stuff.

I feel it took a lot of determination, optimism and a bit of luck I guess, to be in a position to bounce back and be able to climb again. The journey has taught me many things about myself and life in general. I really do believe that we can all achieve our dreams, whether that’s climb F8a, book a climbing trip or do 1-5-9; it’s just our head that stops us. Finally, I would like to say thanks to my partner Beckie, friends and my family without whom I would not be where I am today. Also to La Sportiva for the continued support even when the chips were down.