One of the UK’s premier climbing areas and a place of outstanding beauty, the Lake District is host to many classic routes at all grades from Moderate to E10. Combine this with a wide variety of rock types, a bewildering array of different climbing styles plus short hops from the valley roads or full-on big mountain days it can be difficult to know where to start. To help give you an idea or two Climber asked a man who knows a great route or two, local activist Stuart Wood, to give his list of the top 10 routes around the popular VS category.

The big question is, how do you come up with a list of top VSs in the Lakes when there are so many routes that warrant inclusion? You know full well that many routes are missing, and other climbers will wonder why this route or that route wasn’t in. But that’s the beauty of lists and, more often than not, no two are the same. Well, this list is comprised of routes of outstanding quality, historical interest and popularity. Routes like Eliminate A and The Crack on Gimmer are obvious choices being two of the best routes of their grade in the entire country, whilst there are routes in this list that are less obvious, as Phil Spencer would say, the 'wild cards'. 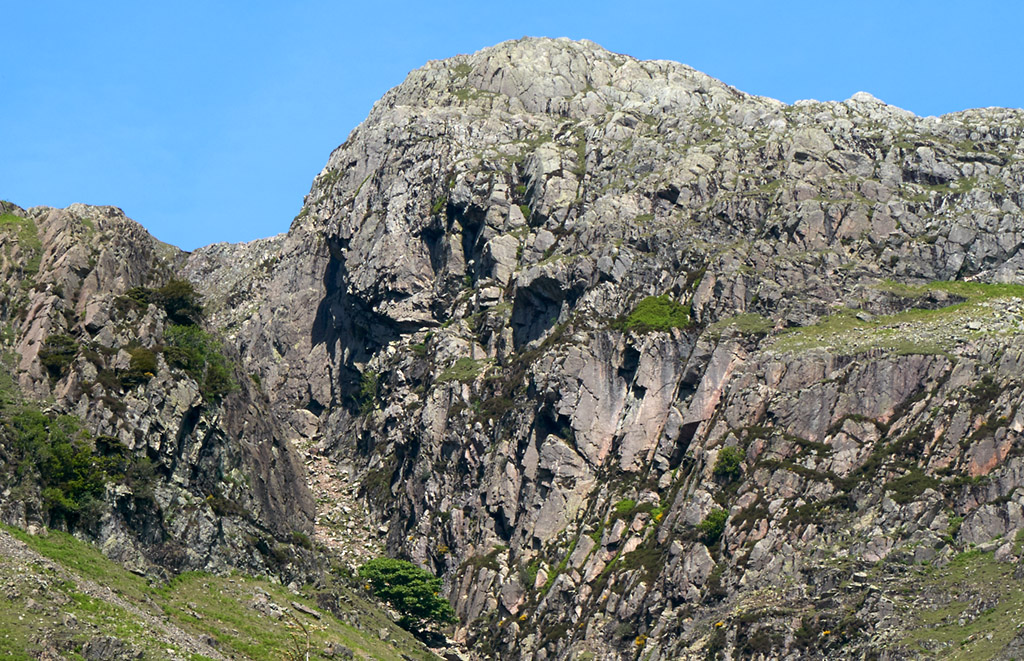 There are also some grade overlaps too, if they are HVS they are easy for the grade and the MVSs tend to be the more difficult ones. In this list I hope to give a flavour of the diverse climbing the Lake District offers, from the splendour of the Scafell massif to climbing below ground in the remnants of the quarrying industry. There are also multi-pitch routes from 120 years ago to single pitch routes put up as recently as the 90s. The spread of first ascensionists range from Godfrey Solly in the 19th century to the still very active Guy Lee and Colin Downer.

Access has also been accounted for and one thing for sure is that every route in this list is superb. These are climbs that I have enjoyed many times over the last 30 years and if you get a fraction of the enjoyment out of them that I have, these routes will make you a happy climber. Once you’ve seen the list perhaps the real challenge would be to climb them all in one long continuous trip. Now there’s a thought – anyone up for the Climber Lakeland VS Paradise Round?

The Crack (VS 4c) Gimmer Crag

This Reynolds/Macphee ‘tour de force’ from 1928 was an amazing achievement for the time. The Crack is a line only superlatives can describe, an incredible natural feature that is the most obvious weakness when surrounded by the sea of rock in the North West Gully. The first pitch takes you straight into perfect slabby crack climbing, when this steepens it deviously strays out left, up a groove and back into the crack for a pedestal belay. The second pitch is the crux, after climbing some thin cracks the ‘mantelshelf’ is gained. From the ledge hardish moves lead back to the crack and the ‘sentry box’, a hard pull from there gains the belay of the ‘bower’. Finally, the top pitch does not ease, it is sustained with an overhang to deal with en route. One of the the best routes in The Lakes. 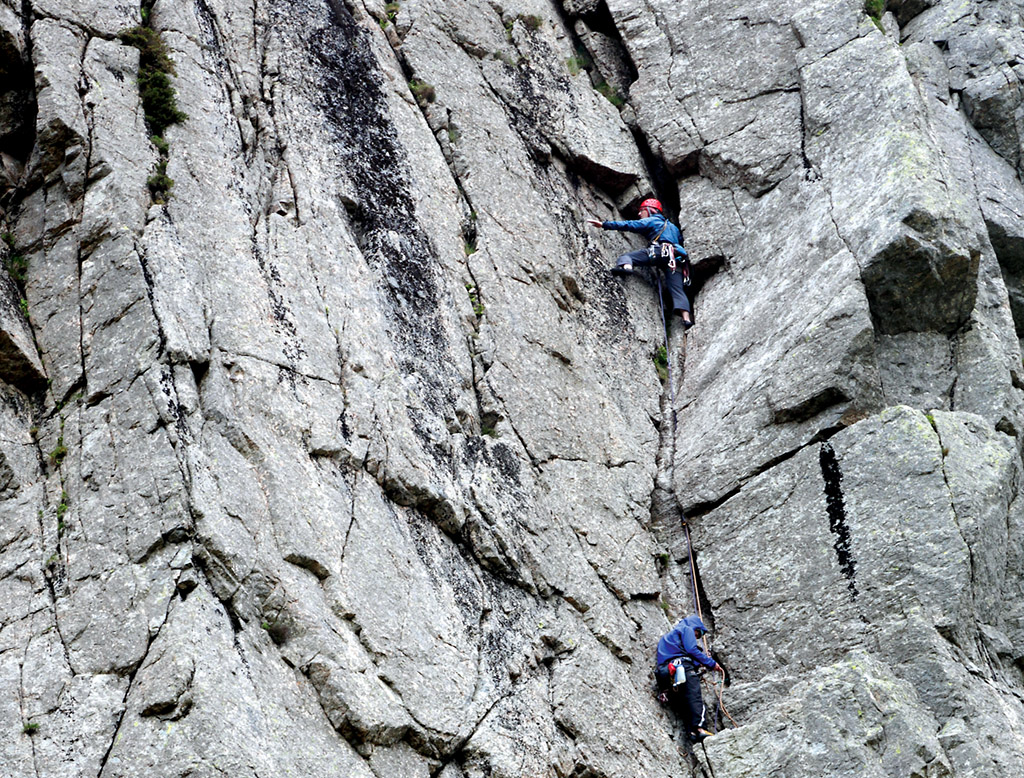 Eliminate A (VS 4c) Dow Crag

The best VS in the world, no arguments; Eliminate A weaves its way through the weaknesses of the great rock architecture of A Buttress on Dow Crag. Not long out of the trenches of the First World War the talented Bert Gross with local, George Basterfield, solved the problem. The rhyolite on Dow Crag is second to none offering amazing friction and is a pleasure to climb. Eliminate A gives six outstanding pitches of varied climbing. This route is really worth discovering yourself without too much beta. Pitch 5 has to be mentioned though for its sensational and exposed position. This one is really as good as the hype, a true mega classic.

Behind the Lines (HVS 5a) Hodge Close

When the Carlisle lads discovered the climbing Mecca of Hodge Close on the doorstep of the ‘South Lakes’ team it must have been irresistible not to have a dig. The most obvious weakness on the huge sweeping walls is the good looking crack/groove at an amenable HVS, the ‘South Lakes’ lads were certainly Behind The Lines. This route is best reached by abseil from the big tree to its right when looking down. The route would get VS if it were not for the first 20ft. From its base after moving up a few feet a 5a move leftwards with no gear gains a good hold in the bottom of a groove. This groove leads to the crack, which is well-protected and extremely enjoyable; the Dervish of The Lakes. 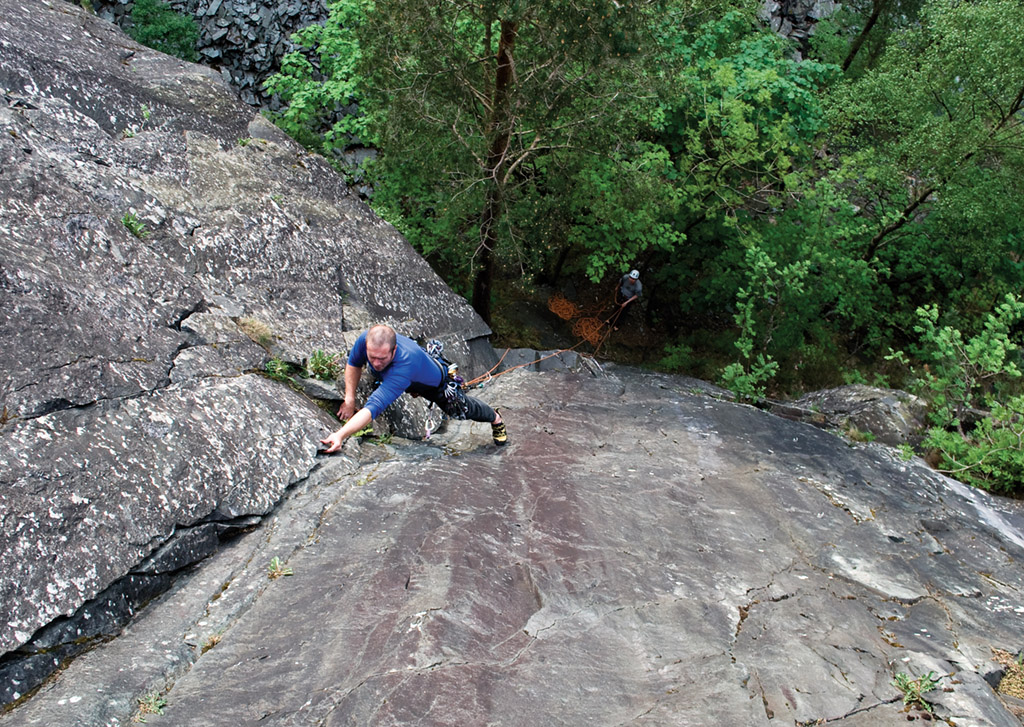 At whatever grade you climb, when climbing in Langdale, it’s hard to avoid Birkett history. This combination gives one of the best ways up the crag via two superb Jim Birkett creations from over 70 years ago. When starting North West Arête from the gloomy North West Gully the climbing feels more intimidating and harder than it actually is. The exposure hits you straight away as the ground falls away from your feet. Luckily the holds are good, as is the gear. The arête is finally reached and gives continued interest in fine positions on perfect rhyolite. Next up is the perfect right-facing corner/crack of F Route. Everything goes smoothly until the very end, where the best moves and the crux appear, an awesome pitch.

Haste Not (VS 4c) White Ghyll

Another brilliant Jim Birkett and Len Muscroft route from 1948. This route must have one of the most unusual cruxes on any route. From the FRCC guide description ‘descend a bottomless coffin-like groove’; sensational. This was my first route on White Ghyll and I’ll never forget Dave Kells and myself, both just 13, sat at the top watching the last bus head to Ambleside so satisfied with the route the thought of a hitch back to Barrow didn’t bother us at all... magic days!

If there ever was a climbing hero of mine it has to be Godfrey Solly. To take that trip up that arête in nailed boots and no protection in 1892 is bordering on insanity. The 19th century equivalent to The Indian Face on Cloggy. The arête starts steeply, but on good holds, and this eventually leads to a ledge, the eagle’s nest. Five metres above this, the crow’s nest is reached, another small ledge. Now contemplate the slab above on slopey holds with crap gear; a Lakeland classic. 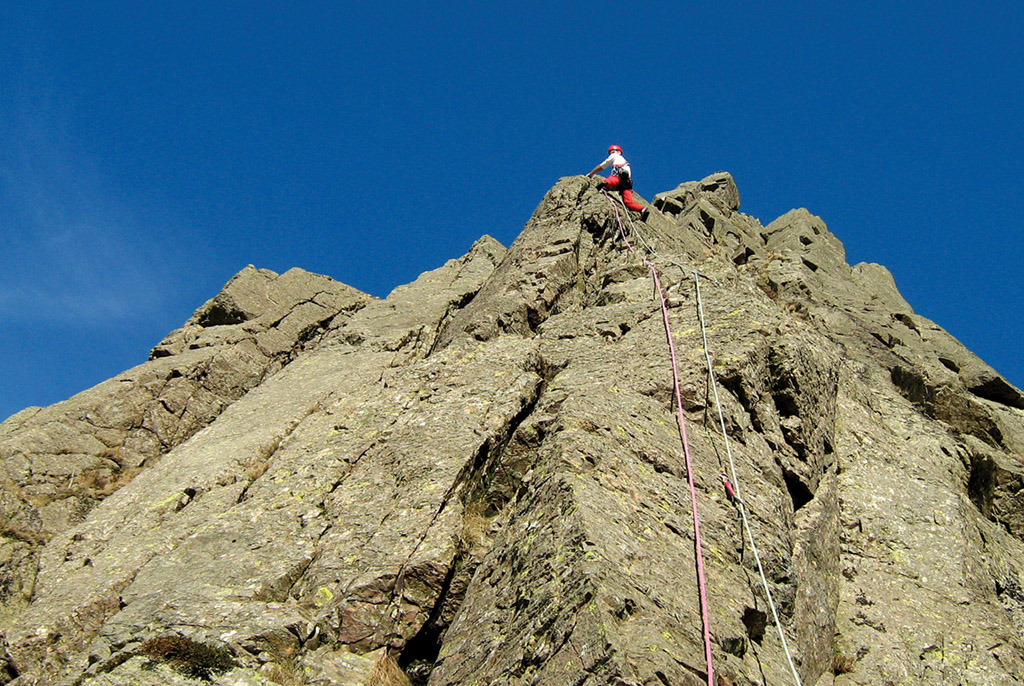 Fred Botterill’s 1903 route of slab perfection must have felt desperate in nailed boots and limited protection. After the introductory pitch the main slab is reached. With modern protection and sticky boots it gives a pitch of outstanding quality at a benchmark VS grade. There is no finer VS slab.

With the uber-classic Overhanging Bastion situated around the corner Gazebo is a bit of a ‘wild card’. This bit of rock is south-facing and gets drenched in sunshine, the quality of the rock is also superb. When us ‘Cumbrians’ let the Nottingham mining refugees settle here they did contribute to our wonderful climbing scene and this Guy Lee and Colin Downer classic is a testament to that. After starting up an easy groove a big ledge is gained on the right. Move right below the blank-looking wall. Thin moves with small gear leads to a steepening on huge jugs. Yard up on these to the top.

In the 40s Jim Birkett dominated the Langdale valley but in Buttermere it was all about Bill Peascod. Bill would cycle from the west coast after working down the pits and enter the solitude of rock-climbing in the nearby Buttermere valley. One of his finest offerings was with Bert Beck, and Eagle Front weaves its way up the huge buttress stringing together some superb pitches. This is a fantastic Lakeland mountain multi-pitch experience… go and do it!

Esk Buttress is a huge monolith that lies below the Scafell massif and is southeast-facing and dries quicker than its glorious neighbours. Medusa Wall is a brilliant, exposed Arthur Dolphin creation from 1947. The upper pitches are in a fantastic position on perfect rock. Just around the corner from these upper pitches lies one of the best mid-Extremes in The Lakes, The Cumbrian. Esk Buttress really is a special place, giving the feeling of isolation, and Medusa Wall is a great route to enjoy the ambience of this magical place. 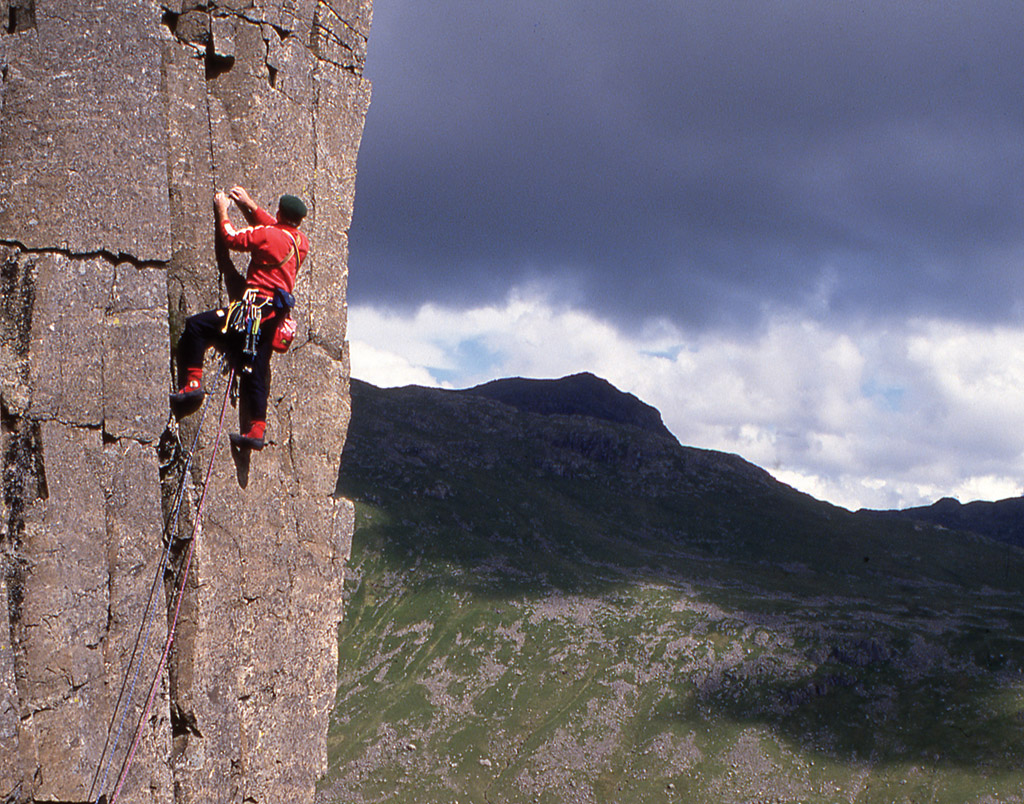