Where Climbs are Earned - Alpine Adventures

The guardian called us all to attention. His face of experience and bright perceptive eyes made it easy for him to gain an audience along with there being only five tables in the tiny Promontoire Refuge dining room. He perched on the corner of one table and asked us all if we were enjoying the sunny weather (it had been snowing for a few hours by then despite the forecast for dry conditions). He carried on with the forecast for the following night and day with his assessment of the conditions likely on the classic Traverse of La Meije. We would be likely to find snow and verglas on the rocks, a biting cold wind and, he thought, little chance of success.

However, the mood in the hut was not moribund. An aperitif of Kir, nuts and pretzels helped us go from disappointed to resigned. Homemade soup followed by a rich and exotic casserole and a chocolate mousse worthy of any restaurant, let alone a kitchen 6′ by 4′ at 3200m on a tiny promontory of rock in Les Ecrins, got us from resigned to positively enjoying being cocooned inside. With more chat and sharing of ideas between guides of at least four different nationalities a plan was reached by everyone to make the most of the following day.

This meant the usual early breakfast for an Alpine start but now the guitar was out and the two local guides were singing songs from local tradition to ‘80s pop. With such a warm and positive feel in the hut it was hard to believe we had been caught out by the weather and even harder to go to bed and end a lovely evening.

This was the start of our two weeks of classic Alpine climbing with John and Peter. Kenny, aspirant guide and friend from home, was with us as well, earning quality days for his logbook and seeing new parts of the Alps. In fact, it was a new area for all of us really and we had made the decision to drive south from the Vallais in search of better weather and climbing conditions. It seemed like a good idea at the time despite the fact that I was shooting in the dark.

The warm welcome and helpful nature of the people in the Promontoire Hut set the tone for the whole trip along with big walks in to huts, long days and very changeable weather. Of all the places I’ve been to in the Alps, The Ecrins have the most friendly and relaxed atmosphere and the most wild and rugged peaks. You earn your climbs here. As a result, the satisfaction earned is greater and I wonder if this shared experience is what makes people here the way they are.

So along with another half a dozen teams we left the hut early to climb the SE Ridge of La Meije Oriental. The snow on the glacier was excellent due to the snowy conditions of the summer as was the approach couloir to the ridge. We climbed the route entirely in crampons and decided it was equal in quality to Alpine classics such as the Arbendgrad on Obergabelhorn or Rotgrad on Zinal Rothorn. As a plan B it was an excellent route and worth the 2200m descent walk back to the valley! 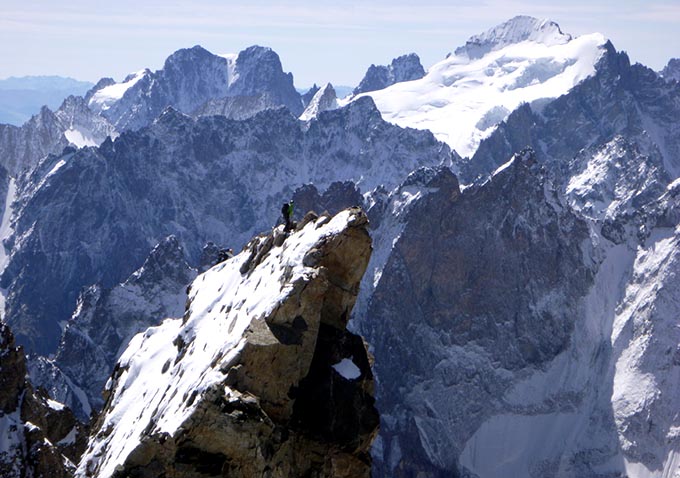 As an example of the approach made by local guides, a local climber in the Promentoire Hut suggested that when asked “C’est combien, le sommet?” a Oisan guide would answer with the altitude of the summit. A guide from the north (any where north of La Grave) would be more likely to answer with the cost of being guided up to the summit.

The cold spell was to continue so Peter, John and I embraced the iciness with a climb of the Barre Noire Couloir and NE Ridge of Barre des Ecrins. The couloir was full of nice hard snow with ice available underneath for ice screws. We were used to climbing outrageously exposed ridges covered in snow. However, having a soft cornice collapse right in front of you to fall down the 1000m face below does tend to focus the mind! Another excellent climb, another 12 hour day and another three day trip for one climb. 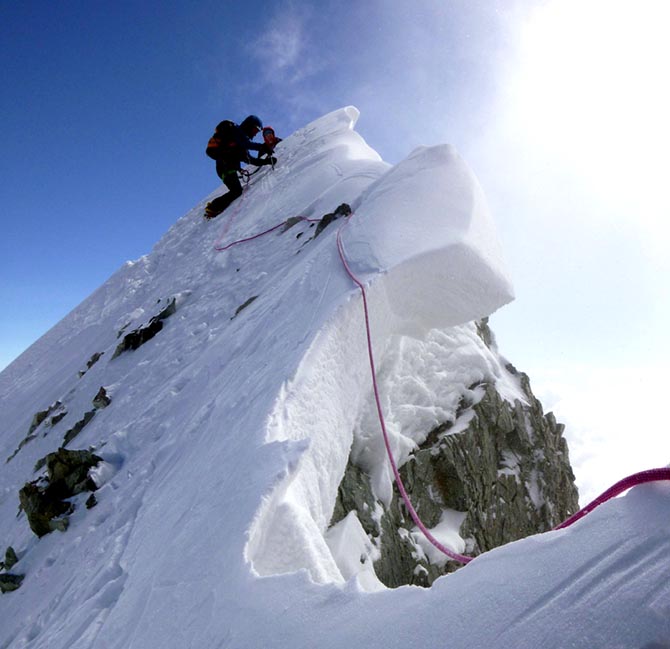 There is one cable car that is useful for Alpine climbing. This is the brilliantly old and clunky telepherique at La Grave where we were based. We used it to climb the W Ridge of the West Peak of Le Rateau which is a very nice short outing. I had asked about the traverse between the two peaks of Le Rateau at the guides bureau in La Grave. The very helpful lady there phoned round to find a local guide who spoke English to speak with me on the phone. He suggested the traverse was not very satisfying with lots of gendarmes which mostly required traversing on one or other of their faces over that particular type of loose ground termed “Terrain Oisan”. We decided to stick to the more solid rock on the classics.

Our plan of descending to the Selle Hut was changed by a quick check of the forecast before going down from the Col de la Girose. It seemed as though a forecast for any following 12 hour period was reasonably accurate but more than that was impossible. We went back to La Grave and enjoyed the 82mm of rain the following day by walking up to the Pilatte Hut. 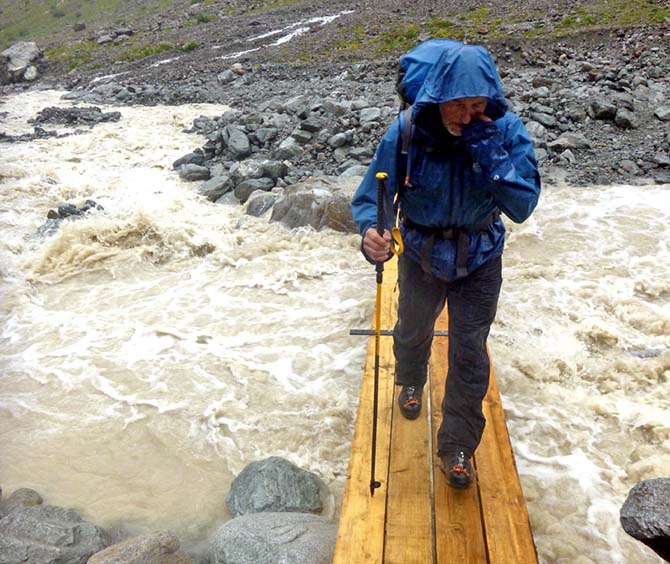 Having carried a full set of ice screws and proper ice axes all the way there it was slightly disappointing to note that the warmer conditions had stripped the snow out of the couloir. This also meant that the NE Pillar was now snow free and this gave us a brilliant day of climbing. Another 12 hour day but this time a four day trip due to the day required to recover from the wet walk in!

So with four days left and the promise of better and more stable weather we focused again on La Meije. We enjoyed a day of gentle climbing on a limestone peak just down the valley to make sure we were ready for three big days then took the lift so that we could enjoy climbing the East Peak of Le Rateau on the way to the hut. Of course, at the hut we learned of the 140kph winds forecast for the following morning and our second try ended with the same good humor at the hut as the first. 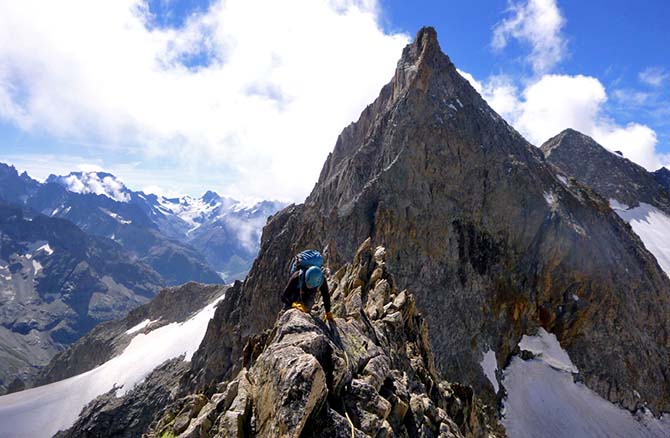 With so much disappointment it was very tempting to give up and go home. However, we had one more day and one more chance of a climb. We tried to do it Chamonix style – we were first in the queue for the telepherique and first across the glacier to the Col de La Girose. Swift abseils down the other side and a particularly loose scramble got us to the start of the route only a little behind schedule. However, you have to earn your climbs here and the route finding was devious, the protection sparse and belays not fixed. Despite thinking we had blown it we kept pushing on and found the second half of the climb submitted to moving together over excellent scrambling. On the summit we had one hour to descend and cross the glacier. It’s not often that you see me running across a glacier.

Now I don’t know if we made it in time or if they waited for us, either way I’m happy. But it would seem to fit that the climbs here take longer than you think and that the people here make that little bit extra effort to help out when they can.

Thanks to Mike Pescod for the words and images.

Mike Pescod is the owner of Fort William-based Abacus Mountaineering and is part of the Jottnar Pro Team.