As lockdown draws on, it’s easy to become overwhelmed by everything that’s going on around the world. Now more than ever it is essential to fall back on stories that will remind us of explorations to come – or just provide some armchair adventuring. To keep you entertained, Vertebrate Publishing have put together some extracts from their favourite mountaineering texts which we will be bringing to you across the website in the coming weeks. 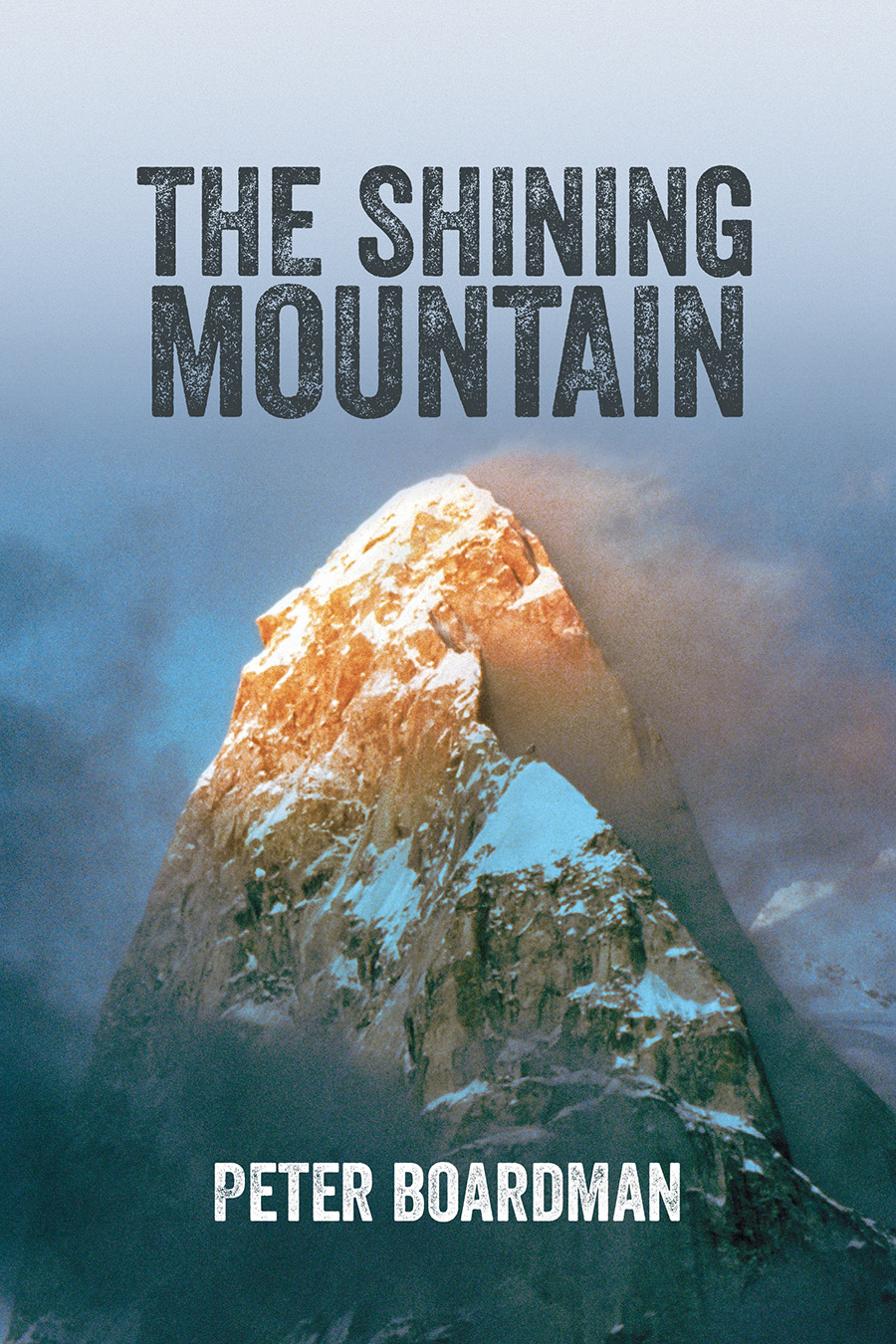 First published in 1978, The Shining Mountain is Peter Boardman’s first book. In his personal and honest story, he recounts his and Joe Tasker’s attempt on the unclimbed West Wall of Changabang. With everything from sleeping in a Salford frozen food store to three nights of hell marooned in hammocks during a storm, this is a lucidly descriptive and exciting story which cemented Boardman as one of mountaineering literature’s finest writers.

In this extract, Boardman describes their first attempts on the West Wall …

All that night and the next day the bitterly cold wind blew. By this time the alarm had twinged us into action. We were back into position and ready to climb by 10.30 a.m., having woken at 5.00 a.m. and moved off by 8.30 a.m. After taking his crampons off, Joe started up a long groove line that stretched up in the general direction of the overhangs. It was magnificent, hard, steep, free climbing, mainly jamming and lay-backing up the crack which was rough and ragged – rather like the famous beautiful granite of the French Alps. But Changabang’s granite, not marked on geology maps of the area, had an air of mystery. It was this intrusion of white, coarse-grained granite that gave Changabang its miraculous shape, unlike all the mountains around it. It was so white that when he first saw it, Longstaff had thought it was snow lying on cliffs at an impossible angle. To us, it was so sound and rough to clasp, it was as if it had been made to climb on.

Joe belayed to a large flake of rock, high in the groove and I took over the lead. Many clouds obscured the sun; it should have reached us by then. Occasionally, to do difficult moves or fiddle with equipment, I had to take off my mitts and climb with just my under-gloves and fingerless mitts. There was a lot of ice in the back of the groove and I managed to smash most of it off with my short ice hammer. As the distance of rock between myself and Joe increased, I began to enjoy myself. This was what I’d come for. I had come for the physical thrill of climbing, not for swinging around on perilously thin fixed ropes. For a hundred feet of climbing I felt confident and light and indestructible. I felt relaxed, rapturously free from a sense of effort, pain and danger, and in total control. Even the altitude almost ceased to complicate my breathing.

The feeling did not last long. The groove dwindled out into a holdless wall at the same steep angle. I had used nearly all my equipment up. Twenty feet above me, the Wall looked as if it relented, over at its right-hand edge, underneath the overhangs. If I could traverse diagonally up to that point, perhaps we could turn the overhangs through their right-hand side, where they looked as if they were at their narrowest point. I would be climbing right above the main Wall beneath the icefield – a near vertical drop of about 1,050 feet. My boots felt big and clumsy as I stepped away from the comforting security of the crack and balanced on two tiny footholds. Below me, Joe was waiting in the wind:

‘That was my stint done. Pete took over the leading, up a groove towards the overhangs. Now we were on a real wall.

There was no shelter from the wind. I shuffled about to find the most comfortable position on my footholds; Pete was out of sight in the cloud. I was cold.

‘The cold had been driven right through my bones. The rope only moved out slowly; I shouted up to Pete that there was not much of it left, with no idea of what he was doing. Through a brief clearing in the cloud I saw him bridged across an icechoked crack. There did not seem to be anywhere for him to rest. I was anxious. His calls to me were unintelligible, as mine probably were to him. Mist closed in again, more time passed. “What the hell is he doing?”

‘There was no rope left. I shouted to him, as well as a dry throat would let me. He must have realised what I meant. I undid the knots which tied me to the stance, in order to give him a little more rope; I hoped, that hope based on confidence, that he was safe and could not fall. With me untied, it would be very serious if he did.

‘My whole physical being tensed with the cold, untensed and shook, trying to find some warmth. It was starting to snow. I interrogated myself with questions about our sanity – “When will we stop this madness and get down to warmth?”

I reached a thin crack with the tips of my fingers and tapped a soft steel piton into it. It seemed secure, so I used it to lever my feet and weight up until I could reach higher with my other hand. I scraped some snow away from the start of a depression in the Wall and curled my fingers around a hand hold. Trusting everything to this, I lurched up, my feet scraping against the rock and mantleshelved on it. The effort had me gasping frantically for air. From there I hooked my ice hammer on an edge of rock and pulled up on that to teeter onto a sloping snow-covered shelf. I knocked in the only two pitons I had left. One of them seemed fairly sound so I yelled, ‘O.K., Joe, I’m there.’ Then I noticed it was snowing. I had no idea how long the pitch had taken me to lead, it was as if time had stopped, I had been so engrossed.

Within moments the clouds opened and deluged snow, then hail-stones. It was only mid-afternoon and we might have done a little more climbing, but the storm precluded anything except descent. I hammered in two more pitons and tightened and fastened the fixed rope I had trailed behind me. I had to knot two ropes together and then jerked back down them through the cloud to Joe.

‘It’s an impressive situation up there,’ I said. ‘We might be able to get around the overhangs to the right. There’s quite a balcony to start from.’ And that’s what we called it after that.

‘I see you’ve fixed my two old climbing ropes,’ said Joe. ‘They should be all right, though I wouldn’t jerk the yellow one too hard, I’ve fallen off on it a few times in the past.’

We started abseiling quickly down, back towards the camp. The storm only lasted half an hour, and by the time we had reached the tent the evening sun was streaming through breaks in the cloud. Then suddenly, amazingly, the wind, which had been our constant companion all the time on the ridge, dropped completely. The tent stopped rattling and we no longer had to talk above its noise to each other.

We finished our evening meal with Christmas pudding and custard, to celebrate.

If you want to read more, all of the books are available from www.v-publishing.co.uk – there’s even a 30% off sale at the moment!