First on the Rope by Roger Frison-Roche – Book Extract

In the second of our book extracts from Vertebrate Publishing, we have a section from First on the Rope by Roger Frison-Roche. 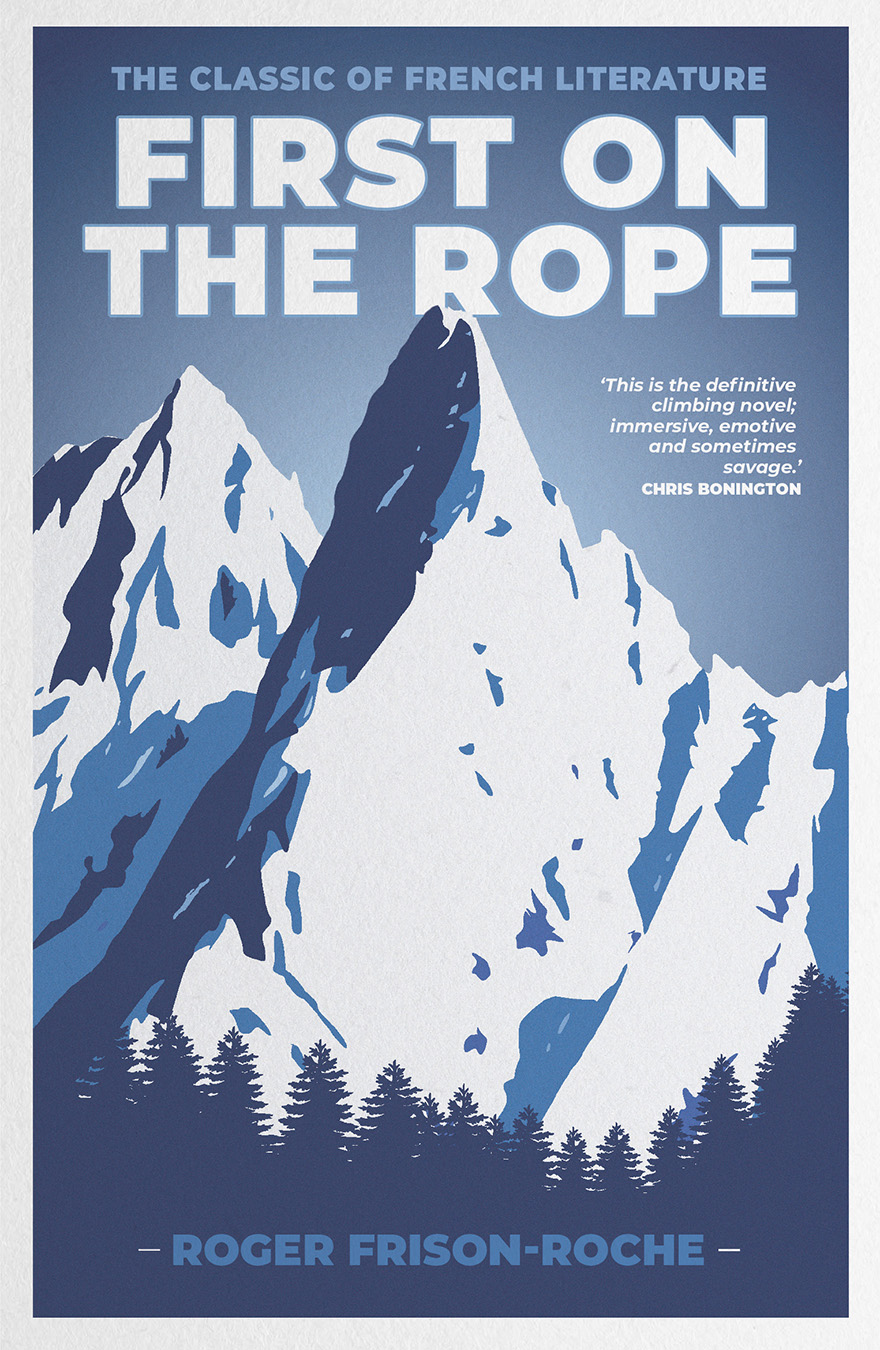 First on the Rope – the acclaimed English translation of the French fiction classic Premier de Cordée by Roger Frison-Roche – is a tale about the harsh lives of mountain guides and their families in the French Alps in the 1920s and 1930s. An ascent of Mont Blanc as porter with his uncle leaves young Pierre further convinced he wants to be a mountaineer. However, his family have other ideas, and as the rhythms of mountain life play out, tragedy is never far away …

First on the Rope

In the living room of the hut three parties of climbers were steadily eating and drinking by the light of a smoky lamp; their wet ropes, coiled up in a corner of the room and stiff with frost, showed that they had just arrived from a long Glacier expedition. Ravanat crossed the room, followed by Pierre; in the dim light they made for the kitchen. As they passed, the diners recognised Red Joseph, famous from La Bérarde to Cortina, and gave him a friendly greeting.

The kitchen was a big square room, low-roofed and built entirely of wood: a narrow window with double glass and one adjustable pane let in some air without admitting too much cold. The Aiguille Noire de Pétéret and the Dames Anglaises were framed in it, as if a painter had arranged the composition, and at this late hour, though it had been long dark in the valleys, the tops were still faintly illuminated from behind by a pearly light that clung to the crests and lit up the curving cornices. Although everything was carefully shut, a chilly draught blew through the kitchen and round the living room, and the windowpanes were decorated with a pattern of frost.

Brocherel, the warden, was busy at the stove. At the common table, several guides and porters were eating and, as usual, talking about their climbs. Cretton of Champex was there, the younger Zermatten from Saas-Fee, the great Carrel from Valtournanche, and three Chamonix men, Joseph à Jozon who had traversed the Rochefort arêtes that morning, his porter Camille Lourtier, a promising young fellow, and Zian from Tines, who had already won a reputation as a rock climber. After making a successful ascent of the Mer de Glace face of the Grépon he had come down the same way, bivouacking with his English client at the Tour Rouge. Thence, without pause, they had come on up to the Col du Géant. Red Joseph must know the news already, they said to themselves; we know the cheerful rowdy way he usually comes into a hut. Today Joseph wasn’t joking: he looked anxious and withdrawn, and didn’t say anything.

‘Heard the news?’ he asked simply.

‘For God’s sake, who is it?’ demanded Ravanat roughly. Behind him, Pierre was waiting in agony; in spite of the cold, great beads of sweat stood out on his sunburned face. The guide gave him a compassionate look before answering.

‘Jean – yes, your brother-in-law – his father,’ said Brocherel, pointing to Pierre, who went white as a ghost. ‘Struck by lightning on the Petit Dru, you know, above that perpendicular bit of wall just under the summit … Cretton here brought us the news …’ (Brocherel fumbled awkwardly for his words, and blinked his tear-filled eyes.) ‘This rotten stove’s still smoking … It happened the day before yesterday in the storm. The porter, that young son of Clarisse des Bois, brought down the client; they had a night out at Straton’s bivouac, and early yesterday morning they got down to the Montenvers. By this time the rescue party must have reached the Charpoua hut – only I’m not so sure they’ll make it, for there’s new snow and verglas everywhere above 3,400 metres. It only just thawed here at midday.’

The guides bowed their heads, overwhelmed by the dreadful news. Pierre drew back into the darkest corner of the kitchen, put his sack on the ground, and realising at last the full extent of his loss, he let himself go in tears which he did not even try to wipe away.

Ravanat came up to him and his great hand, that could grip the rock so firmly, shook as he laid it on Pierre’s shoulder. He did not speak; words are superfluous at a moment like this. All those present were good friends, and Servettaz knew he could depend on them, but the friendly weight of Ravanat’s rough hand on his shoulder gave him more comfort than anything. At last he raised his head – and his eyes were as red as if he had been walking on a glacier without his dark glasses – and said with rare pride:

‘Father didn’t fall, Uncle, did you hear? He was struck by lightning.’

‘You could take your oath about that,’ said Zermatten slowly, in his grating German-Swiss accent. ‘Servettaz was never a fellow to let go his hold.’

This tribute from the great Zermatten went straight to the young man’s heart. His father had died in harness as a guide, and the porter had brought the client down. Servettaz could have hugged Clarisse’s Georges for that – for having brought down Jean Servettaz’s client safe and sound.

There was a long silence as each man pursued his own troubled thoughts. Then, nature reasserting herself, the guides turned again to their food. For them the hardest part was over: Joseph and Pierre had been told. This was what they had dreaded on seeing the newcomers enter the hut.

Brocherel signalled the two to take their places at the table.

‘Sit you down; the bad news won’t have made you any less tired after your climb.’

‘That’s right,’ said Pierre resolutely, ‘you must eat something, Uncle, for I propose that we should start off again in an hour. The others must be up at the Charpoua hut by now, and I don’t want anyone to say that I didn’t go with Father on his last journey. Come on, I’ll set you an example.’ Pierre forced himself to swallow three or four spoonfuls of soup, no more: then wearily pushed the plate away.

‘Be patient, Pierre, my boy. I’d like nothing better than to set out again with you tonight, but we’d be fools not to rest and even sleep a bit. Eight hours’ climb, and this shock on top of it – we wouldn’t go far. Mercy on us, remember what’s ahead!’

‘Look you, Joseph,’ put in Zian, ‘I don’t need to tell you what to do. You’re my senior, you’ve had more experience than anyone else here, and it’s one of your men who’s gone. But you have nothing to gain by starting tonight. Not a thing. The séracs are as bad as ever they’ve been at the end of a season. Three of the snow bridges are in a shocking condition and may go at any moment. Even in broad daylight we had to twist and turn to find the way through: in the dark, you’d end up by sleeping out.’

‘Zian’s right,’ agreed Jozon. ‘The séracs are so open that you just can’t see the tracks; even the steps cut today have melted, and you’d have to make new ones. That’s not a job for anyone to do in the dark, even you.’

The Swiss guides pitched their advice even more strongly. They were all set upon dissuading the two from crossing the Géant glacier by night.

‘Listen,’ added Jozon, ‘you mustn’t hold it against us if we don’t go down with you in the morning. We can’t leave our clients in the lurch: an engagement is binding; but if you like, I’ll let you have Camille, and I’ll get another porter at Courmayeur; there won’t be too many to bring down the body – especially if, as I think, it’s right up under the summit of the Dru.’

‘I must go off tonight,’ Pierre insisted, ‘I can’t sit here knowing that my poor father’s lying unburied somewhere up there in the gullies, under the snow, with the choucas wheeling round him.’

‘Don’t worry about the choucas, the body will be frozen stiff and they won’t touch it. Listen to the others, Pierre. You must take it from me, after all I’m your uncle, indeed, I’m almost your father now. They’re right; if we started now, we’d be going round in circles among the séracs till morning. We’ll set out an hour before daylight, and that way we’ll hit the best time for getting through. We’ll save time – and save our strength.’

Pierre made no reply. His misery was too much for him. He got up and went out on to the doorstep of the hut. He must have fresh air, he felt, to cool his brow. The rocky slabs, covered with frozen snow, glowed in the darkness. A few stars twinkled in the sky above. A strong wind was blowing up from the sleeping valleys where a few lights showed: down there, at the bottom of a great black pit, he could just see the lamps of Pré-St-Didier; a little above them, the straight row of the main street of Courmayeur. The cold was intense. Pierre put up the collar of his windjacket. On the edge of the precipice, with his legs dangling over in the darkness, he sat and brooded with his head between his hands, listening to the solemn voice of the torrent, the only living note in all that stony waste.

After a little while Ravanat came out to look for him. Exhausted as he was, Pierre suffered himself to be led in without a word and stretched himself on the shelf of the dormitory. The loud breathing of guides already asleep alone broke the silence of the hut. He could just make out the line of bodies, each prone in its grey blanket.

Red Joseph sat down on the edge of the shelf and carefully wound up his alarm watch. ‘I’ve set it for four,’ he said. Pierre made no answer, for he had dropped off at once into a deep sleep. The old man was the only soul left awake in the hut. He carefully folded his jacket to make a pillow, but after blowing out the candle lay tossing and turning on the shelf. Sleep would not come. He envied his nephew the youth that enabled him to forget present sorrow, at least in sleep. In the still, cold night he looked unseeing at the fearsome outline of the Aiguille Noire de Pétéret, framed in the little window against the paler background of the sky. A tiny star twinkled over the summit, like a mysterious flame lit by some pious hand to keep watch over the dead man. For the first time, Ravanat pictured to himself the scene which he could imagine only too well. Jean Servettaz’s body, stuck somewhere on the face of the Dru, under the stars.

Tragedy was abroad on the high mountains. Aloof and lofty, they kept watch over the valleys as well, indifferent to the thoughts of the men who perched on their flanks and huddled together in stone huts.

They had kept this watch for thousands of years; and the only sounds to disturb it now were the rumble of a far-off avalanche or the sharper rattle of stones dislodged by the too rapid return of the frost.

If you want to read more, the book is available from www.v-publishing.co.uk – there’s even a 30% off sale at the moment!  Click here to buy First on the Rope.