The centrepiece of Lakeland slate has to be the imposing Hodge Close, a huge hole with immaculate 50m off-vertical walls rising out of a 32m deep, green pond. This is a very special place to climb, once an industrial eyesore producing millions of tons of slate to roof the houses of our land, nature has taken over to leave a tranquil place of beauty with the backdrop of Wetherlam and the Langdales. 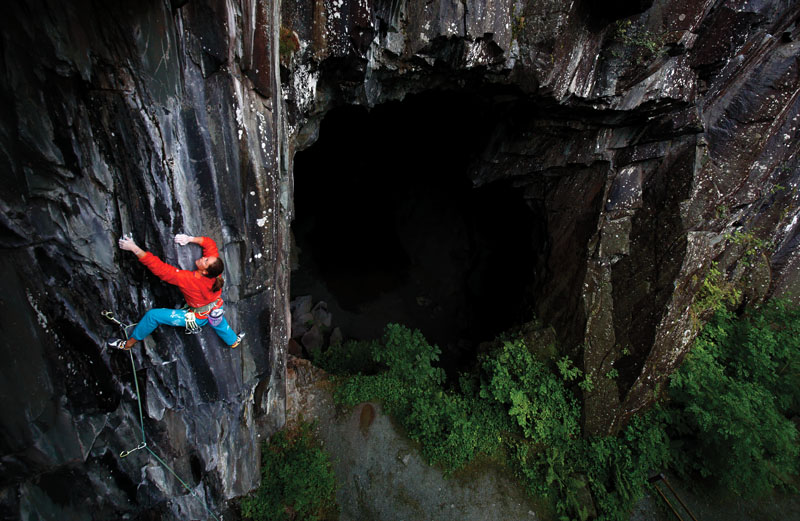 Caroline Ciavaldini climbing I Got Horribly Drunk (E3 6a/F6c+) in the atmospheric Cathedral Quarry with the entrance to the 'cathedral' lurking in the background. Photo: David Simmonite

The first tentative steps of development were in 1973 when Mike Lynch, Ed Cleasby and Pete Rogerson climbed a small pitch below the huge roof left of Life in the Fast Lane, at the time there was no roof just a huge monolith of slate. The team got psyched out by creaking flakes and bailed out. This turned out to be a wise decision as the following year the huge lump fell to the ground and the crash into the water was heard for miles around.

The first real development took place in 1980 and was the work of the formidable Carlisle team; Stiff Little Fingers was the first modern route, a brilliant E3 that unfortunately fell down. Next up was Big Dipper, a brilliant two-pitch E1 that is highly recommended. The Main Event, Wings and probably the most popular slate route in the country, Behind The Lines (HVS 5a) followed. While the Carlisle team were on a climbing trip to Pembrokeshire, the South Lakes team slipped in to produce a brace of quality routes, the highlight being Rob Matheson’s Ten Years After (E4 5c), an elegant and bold wall climb of the highest quality. Whillance responded with the superlative Malice In Wonderland (E4 5c), a stunning arête with the crux a bit too far away from the last runners. He also put up Life In the Fast Lane an E5 that has only had a handful of ascents in over 30 years.

In 1981 routes started to appear in the Cathedral, another impressive hole that is popular with inexperienced abseilers. Paul Clarke produced the fine Going Underground (E4 5c), a scary groove; this was later spoilt by retro-bolting. At the same time Iain 'Wilf’ Williamson was developing Parrock Quarry that sits adjacent to Hodge Close. All these routes were little gems but did not become popular until the early 90s when they were retro-bolted. It was not unusual to see scores of climbers at Parrock queuing for routes and for a very short period it must have been one of the most popular venues in the Lakes. Unfortunately, it succumbed to nature and only the routes on the right-hand side remain.

1983 was a significant year, Pete Whillance returned to Hodge Close to produce the best and hardest route in the quarry and arguably the best slate route in the country. Stage Fright (E6 6b), a 50m wall with a hanging shallow groove just under halfway up that provides the meat of the route… simply superb. The next significant route is now one of Hodge Close's most popular of the harder routes, Paul Carling’s Limited Edition is a superb technical climb of quality. It was retro-bolted in 1992 but very sparingly with four bolts in 33m of climbing. Hard to grade now, either E4 6a, E4 6b or F6c+… opinions? The following year Al Phizacklea added Wicked Willie, a brilliant E5 and a must-do. Al also teamed up with Steve Hubbard to give Hodge a girdle, bizarrely so did Paul Carling and Glenn Sutcliffe. A compromise was met as one team went right-to-left while the other went left-to-right, two E4 girdles in a day. Not knowing of this unusual incident the following week Matt France and Jim Evans also did a girdle, although slightly different they felt it too close to Paul and Glen’s to record. Around this time the right-hand side of Hodge Close started to yield some good routes. Hoof Hearted (E4), Beaver Patrol (E5) and all the other routes are very neglected now but well worth someone giving them a scrub as they are all brilliant routes.

The late 80s was marred by routes being produced by chipping and was rightly widely condemned by the Lakeland climbing community. The best of the 'chipped’ routes was the Lake District's own Manic Strain. Dogfight at Virgin Massacre Creek (F7c+/8a) is a brilliant test piece that should be more popular. I once asked the first ascensionist, Paul Cornforth, where the elaborate name came from. A virgin piece of rock massacred next to the water and while climbing it two dogs were having a fight. More controversial was when the much-eyed blank slab left of Malice In Wonderland suddenly received three scoops chipped out of the slate. Jimmy Bird bolted and climbed it to produce a brilliant F7b Curtain Call.

By the late 80s, more routes were being added to The Cathedral and Tilbertwaite was starting to be developed. Tilbertwaite is quite a long narrow quarry with lots of routes on each side from heights of 10 to 20m. This venue is well worth a visit and the best routes to look out for are Anvil Arête (E2), Look Sharp (E2), Treacle Slab (E3) and Fat Guy Goes Nutzoid (E6) which are all superb routes and just a selection of what’s on offer. The Cathedral was also receiving some stunning routes, Orifice Fish (E4) is an unusual hanging back and foot groove with a big hole below it and very spaced bolts, a classic scare. The blank wall at the back of the quarry was infamously chipped for a television spectacular but abandoned after protest from the local climbing community. Rick Graham made use of the holds to give the fantastic Cruel Sea (E4 6a) that started from a hanging belay halfway up the wall, this was later superseded when Rob Matheson climbed it from the ground to give the brilliant Basilica at only a grade harder. The Cathedral deserves to be more popular and is perfect for climbers operating in the mid Extremes, my recommendations are Orifice Fish (E4), Anal Abuse (E2), Darklands (E3), The Turbulent Beast (E5) and, of course, Basilica (E5).

Back to Hodge Close and Mike Miller tentatively climbed the wall straight above the peg on Life in the Fast Lane to give a very scary E6, Way of the Wyrd. Shortly after, thinking I was on a first ascent, I thought I was going to die on this route and in 30 years of climbing it has been my closest call. Later, talking to Mick about it, he was in very similar circumstances on his ascent, I think we are the only people who have climbed it. Another scare fest was when Iain Turnbull mistakenly went straight up from the crux of Limited Edition rather than going left. This gives Haggis (E6) dismissed in the last guide but, in my opinion, brilliant.

The early 90s saw every nook and cranny being developed and those in the search of esoterica will not be disappointed if you check these areas out. The larger lower walls of Parrock were developed to give some cracking routes and have all been neglected and left to nature. Anybody keen enough will be rewarded with routes such as Speed of Light, Hang em High and Desperate Dan the Dyno Man. Another esoteric gem is Titanic Arête, the name says it all, a Paul Ross E3 that can be found a short walk from Hodge Close in Peat Field Quarry. For a more mountainous environment, Saddlestone Quarry lies on the side of Coniston Old Man and has four very good routes, Homeward Bound and The Shining being the best. Blue Quarries on the other side of the mountain are also well worth a visit, Rascal Wall and Blue Moon being the pick of the crop. 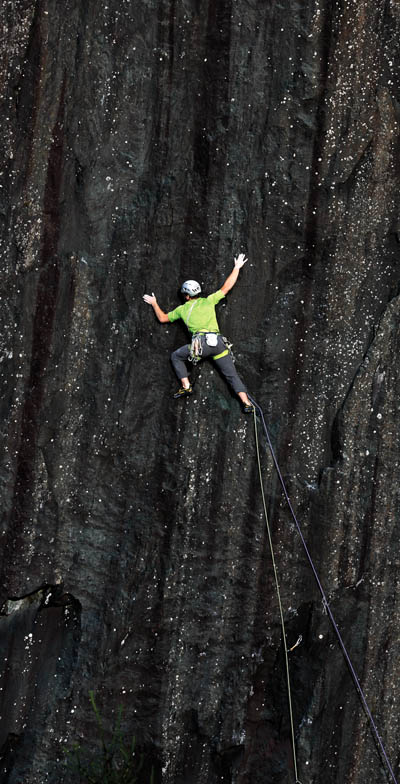 Back to Hodge Close some of the smaller walls were yielding some technical problems. Keith Phizacklea’s Idaho Connection Wave (E5 6c) and my own Chestnut Mare (E4 6c) are brilliant little technical problems. The wall left of The Plunger also gave me two technical exercises, the best being Creative Contortions (F7b+). In the late 90s Keith Phizacklea added the very hard Beef Jerky, Keith gave it E5 but F7c is probably more accurate and as Keith says: "There’s nothing tougher than beef jerky."

The noughties saw less popularity in slate climbing in the Lakes and the pace of development slowed down to a standstill but a couple of years ago I added a link-up of routes to produce a big two-pitch E6, The Big Link. What we need now are some young bloods to get as enthusiastic as we were in these wonderful playgrounds to tidy up the existing routes and leave their own stamp in the colourful history of these brilliant quarries. A new guide is set to appear very soon and if it equals the quality of the other FRCC guides you can be assured it will be brilliant. Buy the guide and let's make slate climbing in the Lakes popular again, and for anyone wanting to make their mark, the roof left of Life in the Fast Lane is yet to be breached.

Ed Booth on the brilliant Limited Edition at Hodge Close. The start is gained by an abseil to a bolt belay at a ledge before a hard sequencey start leads to more straightforward but run-out climbing. Even though it's bolted and would be around F6c the run-outs between the bolts make it more deserving of an E grade hence E4 6a is more accurate. Photo: David Simmonite

Caroline Ciavaldini makes short work of Kick Off (HVS 5a) a well-protected flake line on the left-hand side of Tilberthwaite Quarry. Photo: David Simmonite