Buachaille Etive Mor (the great shepherd of Etive) dominates the southern approach along the A82 to Lochaber. It sits above the confluence of two great glens, Glen Etive and Glen Coe as waters from Rannoch Moor drain westwards. It is best viewed sitting outside the Kingshouse Hotel with a beer in hand on a spring day. There is rock everywhere on this hill; it’s hard to find any hill. And there are gargantuan features splitting the face, one of these, a vertical gully slicing through the right edge of the northern mass of rock, hides a 250m wall of grey rhyolite in one of the most sombre situations you are likely to climb: Slime Wall. But there is a surprise. The cliff is spuriously named when, in fact, only the continually damp and slimy bit, unfortunately, the crux groove of Shibboleth, can lay claim to the moniker. And as a dry spell allows you to start thinking of venturing into the bowels of the shepherd, it then transpires that the rock is surprisingly clean. 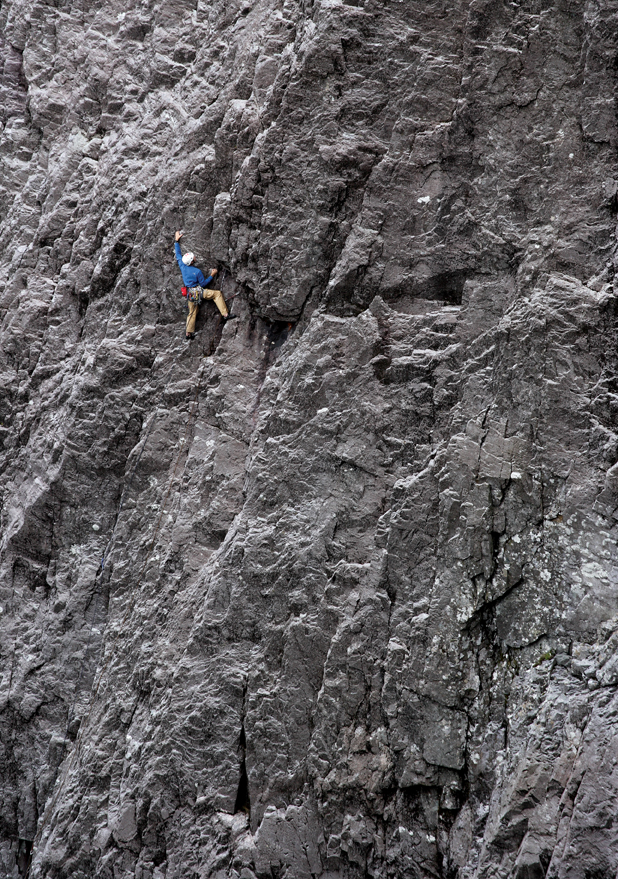 The Creag Dhu Climbing Club dominated the development of the Glen Coe area through the ’50s and it was normal to travel up from Glasgow on a Friday to bag new routes. Alistair Borthwick’s excellent book (Always a Little Further) beautifully captures the scene at the time: outlandish hitching exploits to get ahead of the ‘competition’ for lifts; breaking into expensive yachts on Loch Lomond to sleep in the dry; meeting up in various secret howfs. The leading lights included Pat Walsh, John MacLean and John Cunningham. In 1946 Cunningham had shown the way with the ascent of Gallow’s Route on The Buachaille (still E1 5b), and in 1948 made the first breach of Slime Wall with Guerdon Grooves (HVS). This had drawn an audience of nearly all the club members as he had to tie two ropes together to reach a belay, protection being somewhat sparse. Some felt it was ’unjustifiable’ – quite something for a club with a go-for-it reputation.

However, Robin Smith was one of the most talented climbers of his time, an east coast lad who began to lead the way and usurp the Creag Dubh on their home ground. Shibboleth was perhaps his best in the glen, achieved after a somewhat protracted battle – it was common practice at the time to chip away at these formidable rocks. He inspected the route on abseil, which itself would be quite daunting, and climbed it with Andrew Fraser in 1958. It was probably the hardest and most committing lead in the UK, as Vector at Tremadog, regularly touted as the hardest route of its time, was still two years away. It just made it into the new SMC Glen Coe guide.

Robin Smith was not happy with the finish sneaking off left onto easy ground and he returned with Creag Dubh member John Maclean and added a Direct Finish in 1959. This was written up in the SMC Journal in 1960, almost without comment, as ‘Very Severe’. Back in the ’50s, there were no micro nuts, RPs nor Friends and the middle pitches above the slimy crux must have been pure solos. I have often conjectured that to climb it as Smith and McLean did, with their rudimentary protection would warrant hard E3. Nowadays you’ll get a fair amount of protection in, albeit small, but the route-finding is still tricky.

After I left university in Exeter I was lucky enough to spend 15 years doing nothing but climbing, and in Scotland that meant gaining an apprenticeship by touring the great mountain crags. Despite gaining extensive knowledge I had not consciously made an effort to record any route descriptions, nor rectify mistakes from old guides – much of the available information was in journals or small ‘update guides’. After so many years the notion grew that I could write an updated Scottish Climbs guide, and in 1990 Rock Climbing in Scotland was finally published by Constable, who had done the previous version by Hamish MacInnes.

As a result of this haphazard manner of reflection, I did manage to make a few mistakes, including perhaps the most embarrassing; I managed to confuse pitches 5 and 6 on Shibboleth, giving a 5b pitch 4c, and I gave the crux 5b (now recognised as 5c). No one ever complained and I expect that’s because the route is more of an adventure than a climb-by-numbers exercise so the simple matter of a missing 5b pitch is inconsequential. I had climbed it the first time early in the 1980s. It was one of those climbs that had to be done, a rite of passage, one of a group of Scottish climbs that acts as a marker to your ability. I had already attempted Robin Smith’s other classic hereabouts, The Bat on Ben Nevis and been somewhat spanked. It should have gone easily enough but perhaps Smith’s story of the first ascent (The Bat and the Wicked – also published in the 1960 SMC Journal and the subject of a superb short film) had spooked me.

Shibboleth’s reputation made it seem all the more difficult and, standing below the towering wall, gearing up, an oppressive cloaked figure was staring over my shoulder. He remained a constant shadow all the way towards the last pitch where the Direct Finish heads off across the lip of the Great Cave and into a savage-looking deep crack. There we finally gave up and opted for the original exit rather than risk the wrath of Death. We stumbled down the scree in the gully in silence. Many years later, after the guide had come out, I climbed it again, this time in much better spirits (and weather). There was a lot more protection this time (RPs and tiny Friends) and the Direct Finish (more of an extension really) was no longer daunting but inviting and exciting. The rock was warm and dry, a slight breeze wafted around the gully and those final two pitches, just hanging in space above the whole cliff, succumbed to positive vibes.

If there is a lesson to take from this, it is to climb Shibboleth no matter what the conditions to get the full experience, as long as you take with you a positive frame of mind. This approach is best typified by Mark McGowan who made an audacious solo and I’ll leave the last word to him: “Where is that place that calm, confident feeling where you place your feet and know they'll stick, where you reach up dynamically knowing the shape of the hold before you get there and where your body should be to line up for the next move? When I soloed Shibboleth, I failed to recollect most of the ascent and yet it just sits in my mind with a warm feeling that it felt easy and natural on that day. It was just a smooth piece of movement up this grand face of a late summer’s evening with me as part of the rockscape, moving across the holds with little effort.”