A stone’s throw away from the cobbled main street of Heptonstall village lies a legacy of old; a cliff of red and yellow rock crafted by skilled quarrymen of yore into a gritstone gem faceted with quality climbs. Like neighbouring Haworth, Heptonstall retains the historic character of a Bronte novel and I suspect that back in the day the sisters themselves may well have stood atop the quarry to soak up the sun and enjoy the fine views across the Calderdale valley. 'Heppy' as it is known to the locals is no dirty quarry with crumbling holds and loose blocks, its walls rise from the floor in impending sweeps of smooth fine-grained grit, split by searing cracks and featuring steep corners and jutting overhangs. 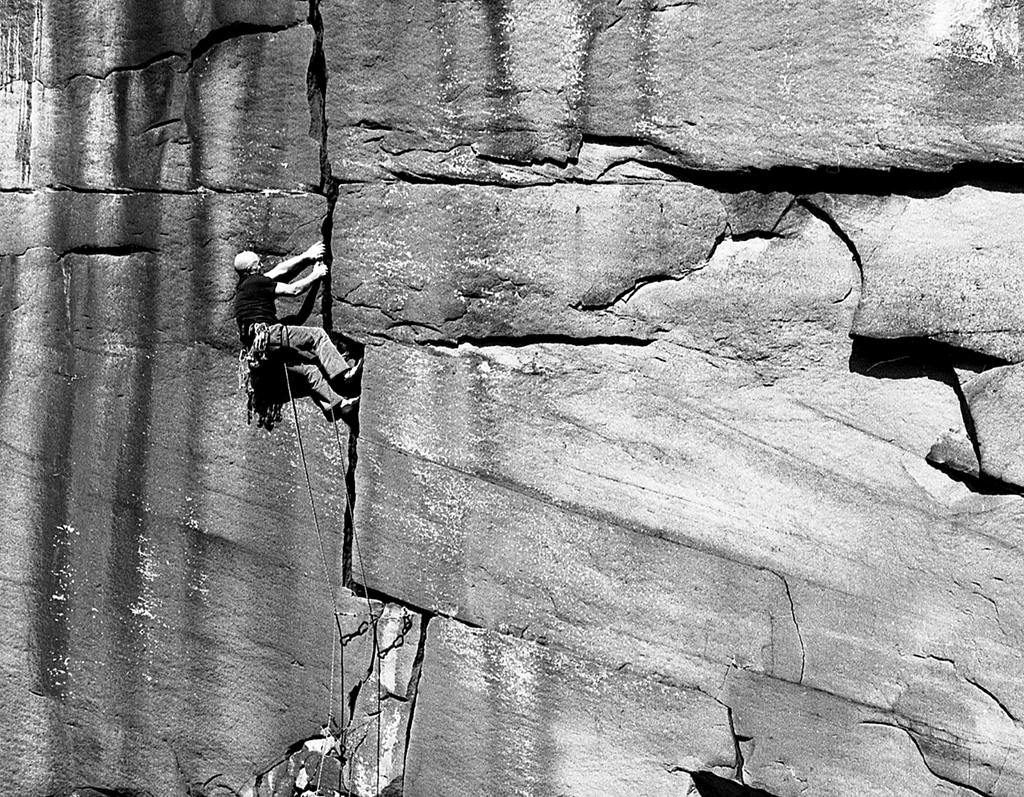 The crag can be divided roughly into three distinct sectors. The Upper Quarry which hosts a high concentration of the more popular and now classic climbs and a Lower Quarry which is less frequented, but still has one or two excellent routes with smaller buttresses of natural grit which form outlying wings to either side of the quarry proper. A free standing block of natural grit opposite the main quarry face has some excellent hard low level traverses to suit those looking for a good modern day work out. Good stake belays are in situ and can be found at various points along the top of the quarry.

The quarry lies on the edge of the village below a modern and exclusive housing development. A convenient parking spot can be found at the Heptonstall Social and Bowls club. The top of the quarry is easily accessed from there in a few minutes by following an obvious path that leads through the housing estate. From the top of the quarry a stone staircase leads down and right (looking out) into the main quarry.

Heptonstall Who’s Who – A Brief History

The quarry has attracted the attention of some well-known climbers over the years which is perhaps testimony to the quality of the crag and the routes that have been produced. Below is a very brief potted history highlighting some of the significant additions. There are many more equally enjoyable and challenging routes that have not been mentioned here, all are worth seeking out.

Local activists, John Hartley, Edwin Leggett, Derek Bull and Pete Grindley started the ball rolling in the late 50s and early 60s establishing routes which remain as classics today. As well as producing some superb free routes these climbers also pegged and aided several lines and in so doing opened up routes that later generations would be able to climb completely free. Not to be missed from this period are Fairy Steps (HS); Pulpit Route (HVS 5b) both Hartley, Leggettt; Bulls Crack (HVS 5b), Bull, Hartley, Leggett; Senility (HVS) Grindley, Hartley, Leggett.

Firmly on the Map

In 1961, Heptonstall was put firmly on the climbing map when Don Whillans climbed the definitively named Forked Lightning Crack (E3 5c). This superb ‘off width’ splits the yellow wall of the upper quarry. Even today it remains an intimidating ‘on sight’ where technique and confidence outweigh modern 'climbing wall' mentality. The route was featured on the front cover of Mountain magazine in 1972 and the iconic picture must surely have struck a chord with aspirant gritstone aficionados of the day. 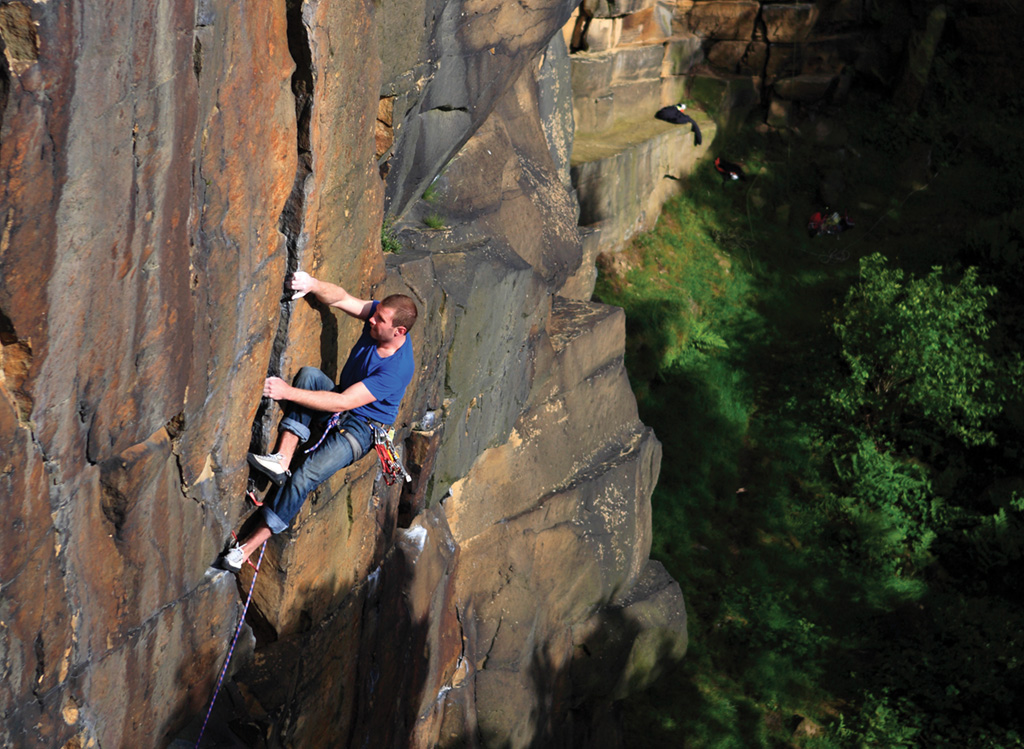 The 70s attracted the attention of a string of well-known and loosely connected stars including Barry Rawlinson, Jerry Peel, Ron Fawcett, Pete Livesey, Al Manson and John Syrett. This was perhaps the Halcyon period in the Upper Quarry’s development. Products of this era included the first free ascent of the impeccable Thin Red Line (E2 5c); the bold Cream (E4 6a) both Rawlinson and Peel; Demerara (E4 6b) Fawcett and Peel; Brown Sugar (E3 5c) Syrett; Hard Line (E5 6b) Livesey and Manson. Even the legendary Steve Bancroft got a look in towards the end of the decade when he climbed the obscure but wild Skulduggery (E3 6a). The nature and quality of these routes are comparable with some of the famous crack climbs to be found at Millstone Edge in Derbyshire.

In 1987 Mark Radtke and Ian Cooksey climbed the steep and intimidating headwall to the right of Red Wall to produce the powerful but well-protected A Step In the Light Green (E6 6b). In 1990 Radtke teamed up with Jerry Peel and together they climbed Orange Crush another exciting, but relatively safe E6 6b, to the right of Light Green. In 1997 Matt Troilett climbed the last remaining line on the Red Wall to produce the modern wall climb Vertical Speed (E7 6c) an exciting adventure with big air time potential left of Hard Line. Surprisingly for such a frequented quarry new routes and variations across the grades continue to be discovered. In 2011, Matt Troilett and Heppy vet, Jerry Peel, added a direct start and variation to Cream to produce a fine E6 6b.

What of the future

In 1985, Peel and Rawlinson climbed the excellent, but flawed Midnight Lightning (E5 6b). When the independent finish to this route is eventually climbed it will produce a truly magnificent modern test piece. Watch this space. 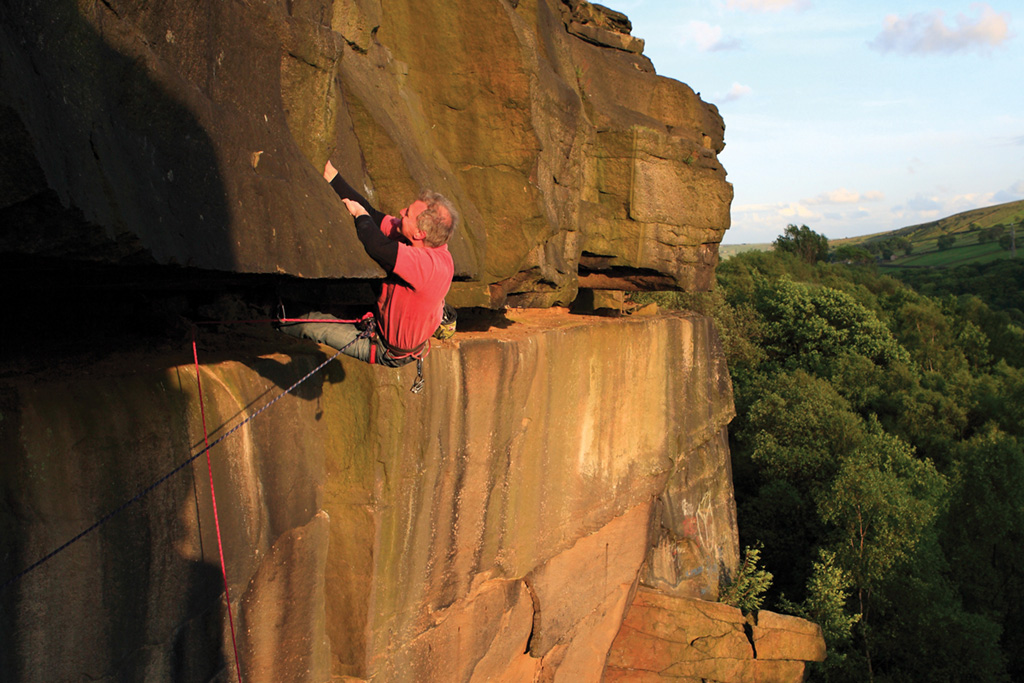 One of the less strenuous lines up the slabby wall at the left side of the main quarry.

Varied climbing up the obvious corner left of yellow wall; strenuous and committing but with good protection.

Classic bridging and laybacking up the striking corner at the right of Yellow Wall. The large ledge (Rabbit Ledge) on the right provides a rest before the chimney exit. The Fork n Sheet finish (E2 5c) provides an alternative finale. From the ledge stretch left to clip two pegs then launch up the arête left of the chimney, an exciting boulder problem in the sky.

Steep well-protected cracks up the wall right of Bulls Crack to finish at the ledge.

The superb crack up the middle of the red wall in the upper quarry. Fight up the finger crack placing good protection to gain good handholds at 30ft. Make more tricky moves right to gain the hand crack and good cams. Bridge carefully up the wide chimney to the top.

An unsung gem in the Lower Quarry; varied climbing in two pitches and well worth seeking out.

An iconic climb, leaving the ledge at the start of the crack requires commitment and confidence, but once executed the rest of the route should fall into place; number 5 cams help.

Powerful climbing with excellent moves in a wild position, some say F7b when all the gear is in.

Yorkshire Gritstone Volume 2 published by the YMC. The crag is also featured in Northern England by Rockfax.