A classic climb of great quality described by Ben Smith.

Heron Crag stood impending on an overcast and damp Thursday evening clinging to the side of the beautiful Eskdale Valley, consisting of steep walls, grooves and buttresses with the added defences of moss, lichen and vegetation. Initially, it looked like this crag would repulse many a climbing team but if one looks closely you can see a clean line of rock with what looks like holds and gear striking a direct and formidable line up the centre of the crag. This is the line of Gormenghast a three-star Lakeland E1 and a Hard Rock classic and the line of the crag. Perhaps, indeed, the line of the valley... When I first saw it one thought crossed my mind, why have I not climbed this route before? 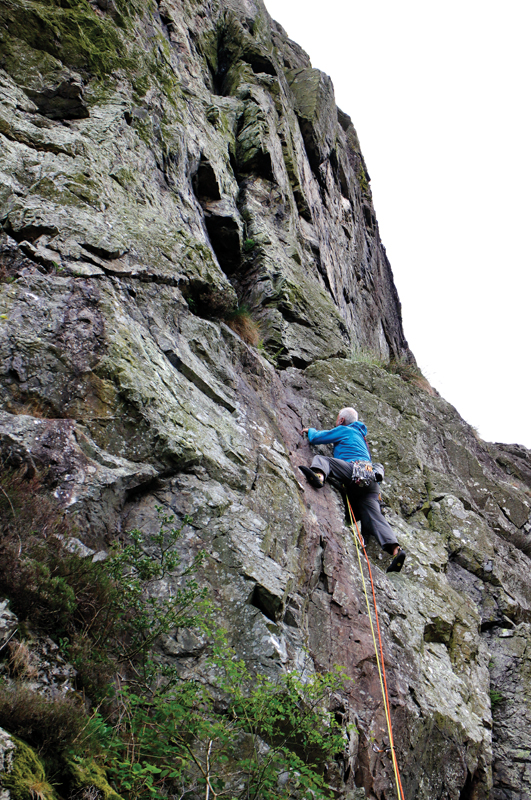 The route takes a more or less direct passage up the centre of Heron Crag. A now secluded and sombre crag located towards the northeastern end of Eskdale. Often access is banned in May and June due to a nesting peregrine which may be the reason for the appearance of the crag. Notices are placed at the base of the crag and on the BMC Regional Access Database and the FRCC websites if the birds are in residence. However, once access is allowed Heron Crag is a fantastic place to climb, although it is not too far from the road it has an adventurous ambience.

To get there by car you either have to tackle the steep and winding Hardknott and Wrynose Passes with their tourists and errant drivers, or travel the long way around the Cumbrian coast road to Eskdale. A brisk 25-minute walk takes a path through Brotherikeld Farm, crosses Scale Gill before contouring to the foot of the crag. When I first walked past the crag on the way to the Upper Esk Gorge, Gormenghast stood out as the cleanest and most striking line up the buttress. I thought, initially, that it looked like a hard route but actually, it is fairly amenable. It used to be HVS but now gets E1 and this probably relates to the quality of the peg in the belay after the first pitch and on the second pitch, either the awkward, tough direct start or the easier but less well-protected deviation to the left.

First climbed by Les Brown in 1961 the advent of modern gear has done little to alleviate the seriousness of the first pitch. The leader may find themselves thinking: “Is this really only 4c?” Starting at the toe of the buttress the route follows the obvious line on good holds and interesting rock with a slight deviation to the right. The protection on this pitch is scarce and it feels very atmospheric on the lead especially if there is a spot of rain in the air to add spice. The rock is interesting and of good quality though and the line is obvious facilitating the belay ledge to be reached quickly.

Pitch 2 is the main event on the route. The guidebook suggests taking a belay there and the purists will find this obligatory. However, far better to link the first and second pitches together giving the leader space to arrange the gear and push on. To go direct at 5b is a tricky but well-protected crack and is the line to choose if you like to grunt and wrestle. Leaving the ledge feels committing with the old peg for company but gear and holds start to appear and improve the more progress is made. An ancient thread is passed which serves no purpose apart from historical interest and to point out the way. Once an unfortunate stuck wire is reached the crux is over and the climber can now relax and enjoy the easier climbing above. A classy piece of climbing that rewards a positive approach. The crack, now easing, leads to a niche and onwards to a flake belay or ascend to the ledge and rather sad looking holly tree where there is some in situ abseil tat. Alternatively, the original way (5a) ascends the clean wall on the left, taken on positive holds but with little gear. This way misses out the strenuous part of the crack but heads back right to rejoin the crack at the niche. It is perhaps only for those with a penchant for run-outs as the protection options are very limited, but the climbing is fantastic. Quite an undertaking in 1961.

The third pitch is really the icing on the cake and was ascended initially as a direct finish by none other than Don Whillans. It is now considered to be the usual and best way to finish to the route. From the holly tree, the route traverses rightwards, airy and exposed, but on big holds and then upwards with a couple of 5a moves. Gear is good and although the rock is steep in places the holds are big, the rock is clean and this pitch climbs very well. After some easier climbing, the route deposits the climber at the very top of the crag and a belay can be taken on the plethora of cracks and spikes. After soaking up the glorious view up Eskdale and towards the Cumbrian fells whilst bringing up your second, all that is left is the easy descent back to your rucksacks and then maybe a celebratory pint in the valley to toast success on a true classic.

'In March 1960 Les Brown, then working down the road at Windscale, climbed his modern classic right up the central pillar to put the crag properly on the map. Gormenghast immediately became popular and has remained so ever since. Half a dozen or more routes have been climbed since.... and the most popular line on the crag is still undoubtedly Gormenghast'. From Hard Rock.