Fairy Cave Quarry is a large, disused limestone quarry, tucked away in a quiet corner of rural Somerset with slabs reaching a height of 40m. Its development as a climbing venue began relatively recently (production having ceased in 1977). This development has taken place without recourse to fixed gear of any kind, save a few in situ lower-offs around trees. Most of the climbs of any quality are to be found on a series of large, north-facing slabs. The remainder of the rock is less good and there are extensive stretches that are downright chossy. Bold, traditional, north-facing; destined for obscurity you might think. Yet Fairy Cave is among the most popular crags in the area, and those who like it, tend to like it very much.

Why so popular? Well, the convenience of the quarry can't be denied: the shortest of walk-ins from the car, flat areas at the base of most climbs, handy belays and descents. The best bits of rock are very good indeed and in places provide a near-perfect climbing surface. There are some 140 routes covering a wide range of grades, including many of star quality and several classics. Wildlife is reclaiming the place nicely and Fairy Cave is a pleasant place to be, particularly in spring and summer. Ash, buddleia, blackthorn, hawthorn and hazel are well-established; wild strawberries grow in the quarry floor and atop the Glacis; cowslips, bluebells and primroses adorn the narrow, grassy meadows above the quarry walls. It is also a very sociable crag; after a climb one can retreat to the broad central plain and stroll around the various climbing areas to see what people are up to.

It must also be conceded that climbers have found Fairy Cave Quarry a good crag at which to push their grade. This doesn't necessarily mean that the routes here are overgraded, although inevitably some will disagree (following publication of the 2004 guidebook a strong consensus emerged that the grades at Fairy Cave were on the soft side; the 2012 guidebook made some effort to rectify this). The problem is not particular to Fairy Cave, of course, but part of a bigger picture, the inherent difficulty in the grading of slabs using the same criteria as for steep rock. Slab climbs can be, and often are, both technical and bold, and these are ingredients that push up the grade of a climb. However, in the absence of a forearm pump, there is generally more time in which to consider options, place gear, and regroup between hard moves. To set against this, the consequences of falls on slabs are often serious, as gear is typically spaced and/or marginal, and there's rock to hit on the way down. No doubt the debate will continue, but it is hoped that the grades are now reasonably consistent and accurate indicators of the difficulty and seriousness of the climbs.

As the name suggests, Fairy Cave Quarry is home to some of the best-decorated caves in the area. Cavers have been there longer than climbers, having begun their explorations with the quarry still in full-scale production. After the closure of the quarry, cavers remained active and, in the early 1990s, those who were also climbers began to investigate the quarry walls. Climbs from this period are few, but some enjoy enduring popularity. One of the first recorded routes is The Alpine Ridge (100m PD), an obvious feature that divides the quarry into its East and West Ends, and which provides a useful descent (Moderate). 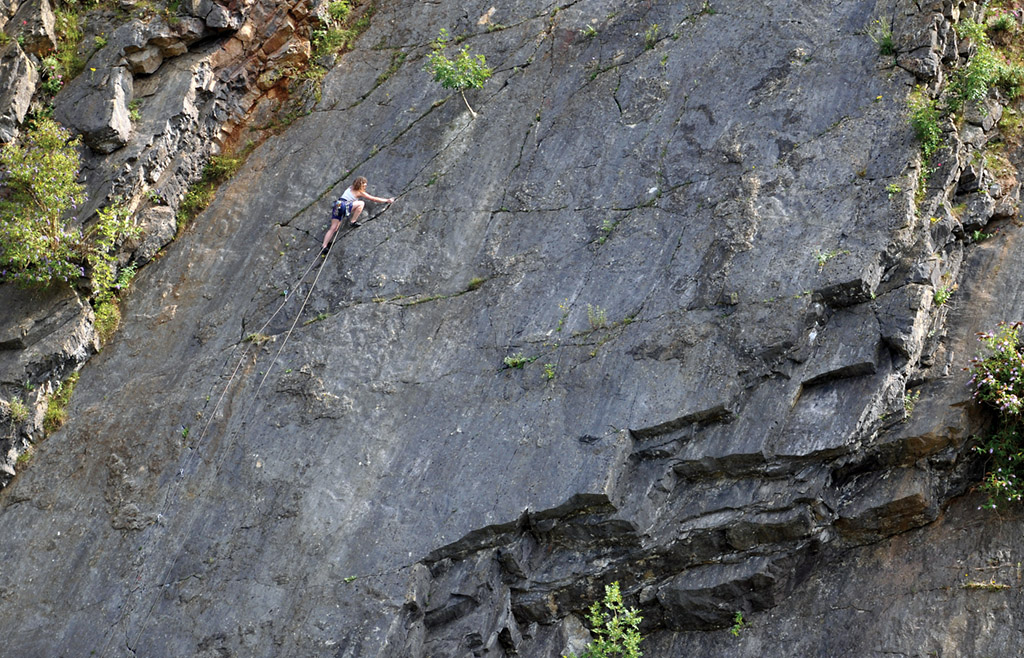 No discussion of Fairy Cave Quarry would be complete, however, without talking about Balch’s Slide (HS 4a) and Rob’s Crack (VS 4c), two obvious targets for the first-time visitor. Balch's Slide takes a very direct line up a strip of smooth rock in the middle of a sweep of brown, west-facing slab, and is often drenched in sunshine. The route is a test more of nerve than technical ability, being sparsely protected, especially in its lower half but it attracts many suitors nonetheless. Rob’s Crack is universally regarded as a classic, fully deserving its three-star status, and is among the most frequently ticked VS routes in the South West. Secreted away in the far right-hand corner of the East End, Rob's Slab is a 35m slab of excellent rock, dramatically split by a diagonal line of massive, stepped overlaps. Surrounded by a clutch of starred Extremes, Rob's Crack takes the easiest way up the slab, following an obvious, curving crack. Unusually for Fairy Cave, it is very well-protected, offering bomber wire placements just about all the way up.

Development remained slow into the new millennium, but in 2002 that changed dramatically. Having languished in obscurity for over a decade, Fairy Cave Quarry suddenly found itself in the limelight. Word spread quickly about the new routing possibilities on the blanker areas of slab and local climbers began to arrive in numbers. Particularly prolific was Mike Raine (author of the crag entry in the 2004 guidebook), often with Ian Butterworth, Pete Clarke, Richard Nadin and others. The Broomhead/Stanbury partnership concentrated on the Glacis, the small but excellent set of slabs in the far south-west corner of the West End, while Martin Crocker and John Harwood put up routes throughout the quarry, including the two lines that remain the crag's hardest: Seven-mile Throb (E5 6b) and Pocket Piranha (E6 6b). In little more than six months the number of climbs at Fairy Cave had leapt from 10 to 60.

The 2002 new routeing bonanza spawned many good climbs, with the E2 grade particularly well-represented. Two harder climbs, however, merit special mention: Moving Target (E3 5c) and Glacial Point (E4 5c). Moving Target is a marvellous route, a three-star, regional classic and one of the best routes of its type in the country. A scrappy start takes you to the slab in the middle of the wall where the fun begins. This slab, though easier angled than the headwall, is very smooth. There is good gear, but this already below your feet when you must tackle an elusive leftward rockover/mantel. After this crux, easier but bold climbing leads to the steep headwall. This has a serious look, but is adequately protected, and provides thoroughly absorbing, sustained 5b climbing to the top. Glacial Point is a fine route with a rather complex history. The original ascent was solo, but shortly afterwards the route was climbed with a different finish, more suited to leading, and this became established as the main line. The technical crux is low, with some precariously thin moves reliant on microwire protection, but a bold move past a small overlap to gain a deep crack constitutes the psychological crux. Thereafter the quality of the climbing is maintained, with some tricky moves still to come, but with bomber gear in, it all feels less intense. A direct start up the blank slab to the left was an obvious possibility, but it didn't get a serious look until much later. In 2011 a short diagonal micro-route, Misdirection (E3 5c), made some use of this area of slab, then the bold Direct Start (E4 5c) was finally climbed in 2012 – too late, unfortunately, for inclusion in the new guidebook. 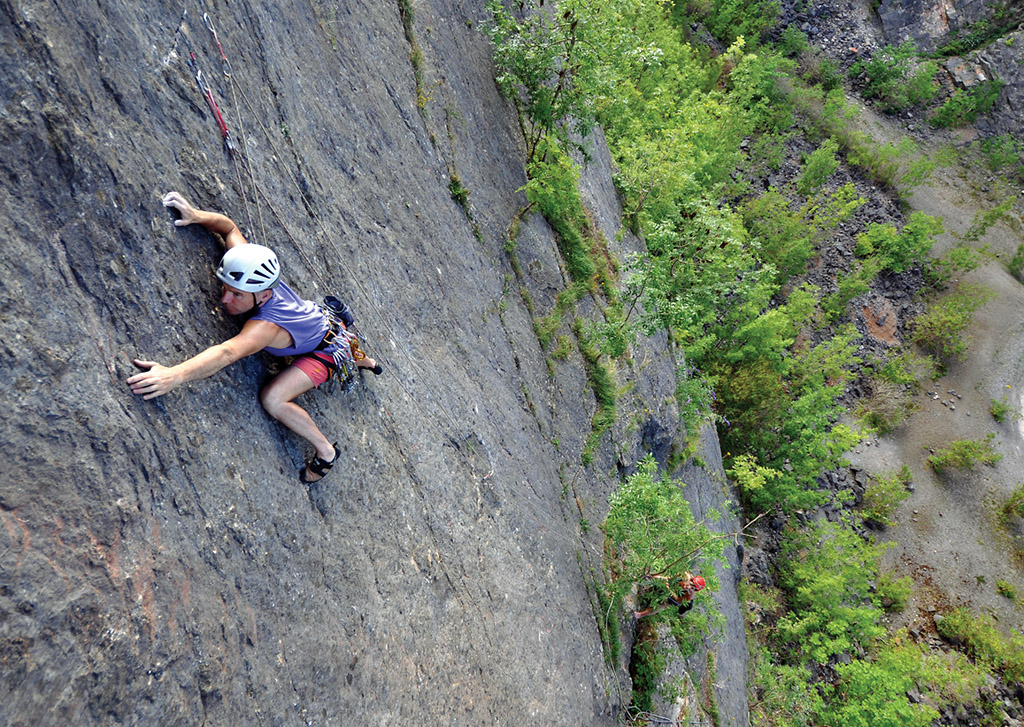 After 2002, development was patchy for some years. There were a few worthy additions on the slabs and several of dubious merit on the steeper, fundamentally less stable quarry walls. Then in 2009 the access situation came to a head, the owners announced a strict ban and ring-fenced the quarry. After some lengthy and delicate negotiations the BMC secured an access agreement back in the summer of 2010. This, together with the prospect of a new guidebook, catalyzed another period of intense activity, mainly in the spring and summer of 2011. Various local climbers got in on the act, but the principal players were Mark Davies and myself. Despite the prevailing opinion that the quarry had, by and large, been climbed out, attention turned back to the slabs and some surprisingly good lines were found. Even more unexpected was to find several at amenable grades, including The Con (S 4b), surely climbed before yet unclaimed, with stylish bridging up a long groove and Talk to the Hand (VS 5a), a route of escalating difficulty following a crack in a slab of excellent rock. Comes the Seth (HVS 5a) provides some entertaining and varied climbing on a hanging slab in a hitherto neglected corner of the quarry. Several worthwhile Extremes were also added, one of the best of which is Wessexy (E2 5b), with its committing crux rockover high on the steep headwall.

Fairy Cave Quarry is now more popular than ever now with 140 routes from V Diff to E6, evenly spread across the grades. As man-made crags go, it really is a bit of a gem and it bears repeating that the access situation is delicately poised and future availability can't be taken for granted. Hopefully many more climbers will get as much enjoyment out of the place as I have.

Fairy Cave Quarry (OS Ref ST 656 476) lies due south of Bristol, a few miles northeast of Shepton Mallet. From the A37, two miles south of Binegar/Gurney Slade, take the A367 Bath road, go through Oakhill, and continue to a large inn on the right: The George. Take the second turning on the right after the inn, then at the bottom of the hill turn right again onto a narrow lane. After 500m the quarry gate will be seen on the left behind boulders. Park close in, leaving room for farm vehicles to pass.

The BMC have secured access for climbers through negotiation with the landowner. There is a combination lock in place on the entrance gate and the gate should be re-locked behind you at all times. The code for the lock can be obtained by emailing Ian Butterworth, the BMC SW Access Rep at fcq@btinternet.com stating your name, contact details and any climbing clubs or BMC membership (BMC membership is not a condition of entry). It is worth emailing in plenty of time before planning a visit to ensure that Ian has time to respond.

Ian will maintain a list of those who have been given the combination so they can be informed should it be changed. Please see PDF one the BMC RAD site here for details of the access agreement. 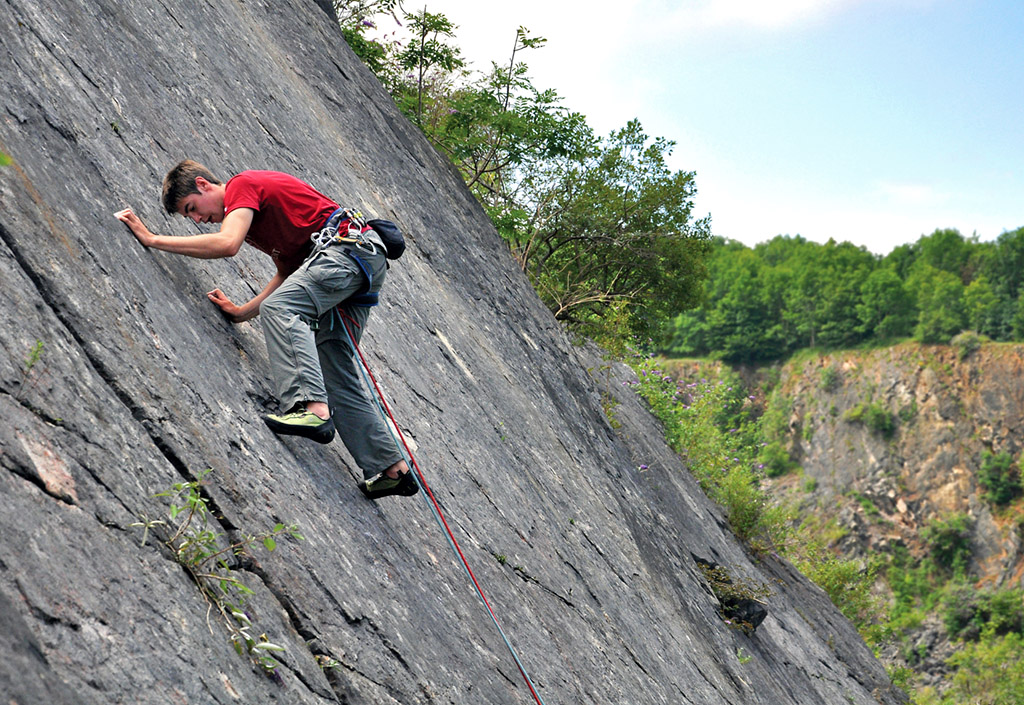