I’ve included 10 titles that I’ve pulled off my own bookshelves to recommend as lockdown reading. I’m not claiming that they’re the best climbing books to have been written, but all have personal meaning for me. Most are historically significant and therefore deserve the status of classic. I’ve taken inspiration from each and everyone in some form or other. These are not reviews, rather a brief appraisal of what you might expect in each volume and what I found as personal highlights. Some may be out of print, but a quick Google search revealed second hand copies available at very reasonable prices. One or two have become collector’s items and are priced accordingly.

Hands of a Climber – Steve Dean 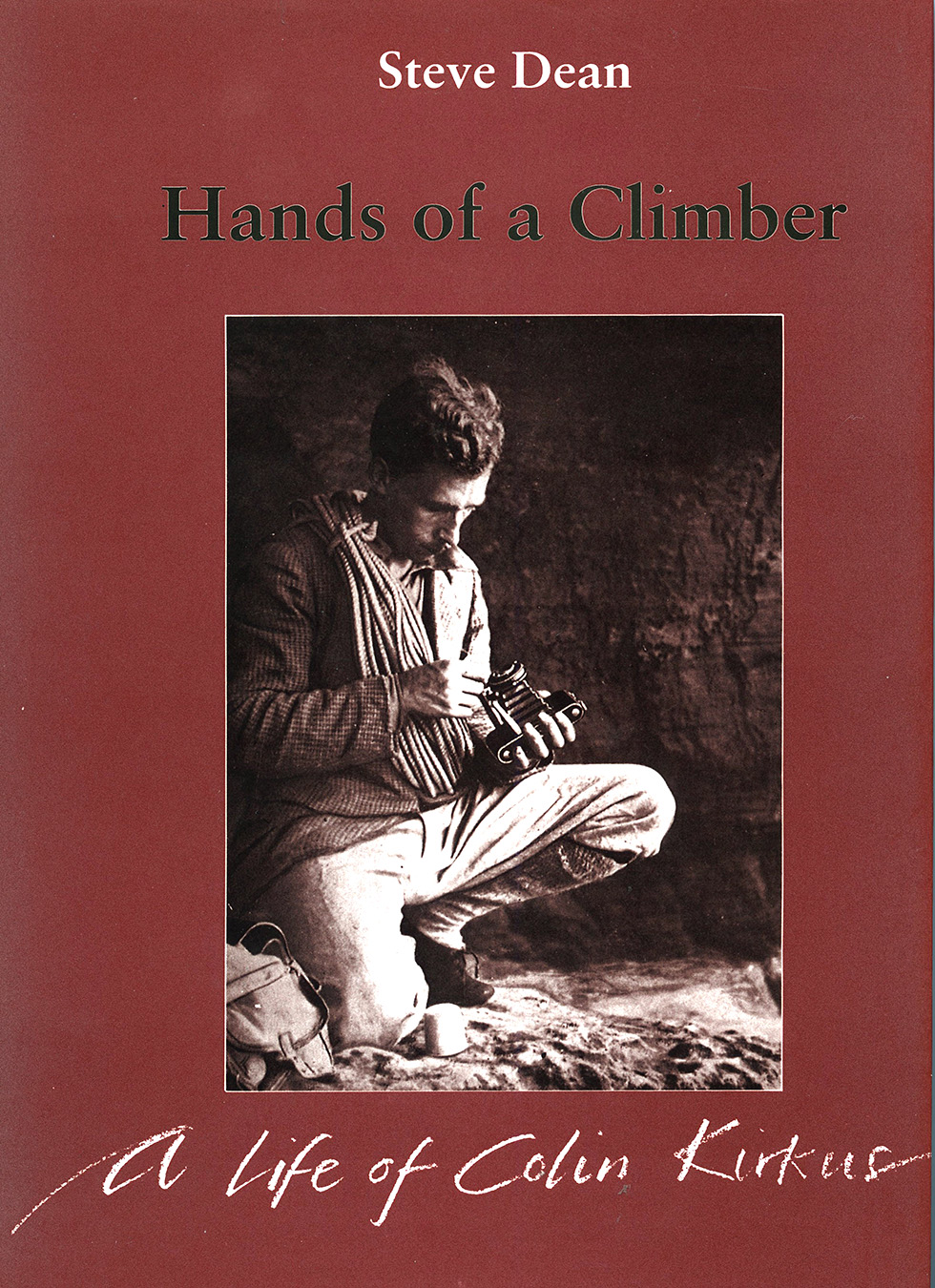 I only read this for the first time a few years ago, but it proved to be a real eye-opener in that it covers what could be described as the ‘dark ages’ of British rock climbing, i.e. the less documented period between WW1 and WW2. The central figure of this excellent biography is Colin Kirkus and Dean reveals the man behind his climbs as well the stand out climbs he produced at his ‘local’ outcrop of Helsby and further afield in Snowdonia, Cumbria and Scotland. Like Joe Brown who came after (and who Brown admired and emulated), Kirkus was all about style when it came to first ascents. The way that Kirkus and his friends approached their new routing and climbing in general, provides insight into the mental fortitude of these characters. As well as triumphs, there are also tragedies in this book, it is one of the few climbing stories that left me with a lump in my throat. 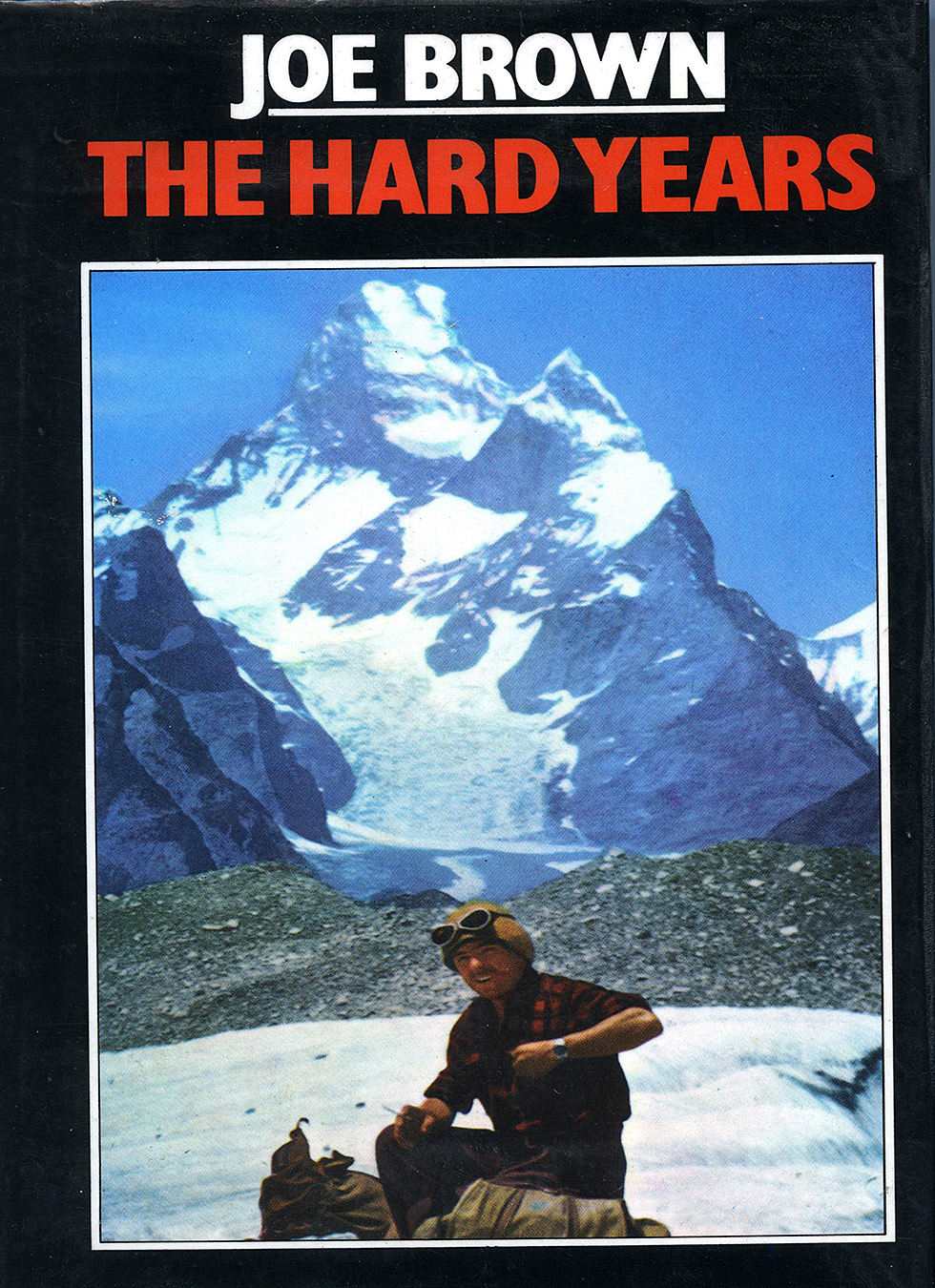 I can’t say much more about this one that hasn’t already been said, so I’ll keep it very personal. I first read this book in the late ’70s and have to say that its spark set a fire in me that burns to this day. What struck me when reading about Brown, was not just the quality and difficulty of the new climbs that he established, it was the style and finesse in which he established them. I owe a great deal to the man who worked his magic on the rock, the aura surrounding his routes created a compulsion in me that I couldn’t resist. In those early days I had to go out and try them and boy what rewards they provided. Brown threw me a line in this book and I was well and truly hooked. If you read it back in the day, then pull it off the shelf and re-immerse yourself in the wonderful stories. If you haven’t, get hold of a copy and see if once started, you can put it down. 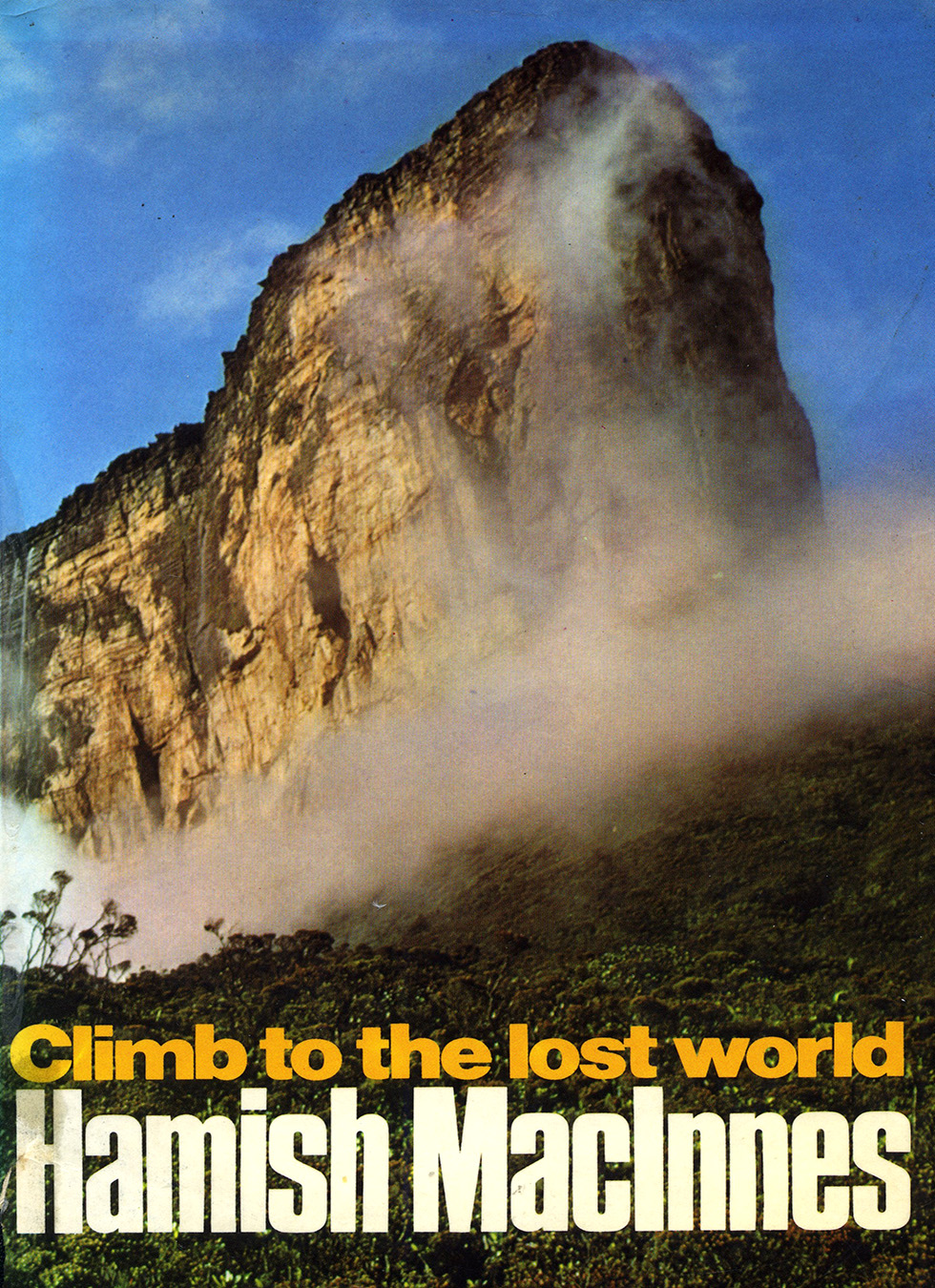 The chaotic 1973 British expedition to climb and film the great prow of Roraima is presented in comedic style by MacInnis. Much of the narrative covers the teams’ encounters with poisonous creepy crawlies and deadly snakes as they battle through the mud, slime and swamps of the Guyanan rain forest. In this sense it’s a bit of a ripping yarn. We are treated to some great caricaturing of the lead protagonists that include Mo Antoine, Joe Brown, Don Whillans together with the author himself. Disappointingly, the real climbing is condensed into the last quarter of the book, which is a shame because it makes for excellent if uncomfortable reading, as the climbers endure atrocious conditions on this big wall. MacInnes captures the evolving tensions between the lead climbers as they each encounter some gripping situations in their bid to force a line through inhospitable terrain to the summit. 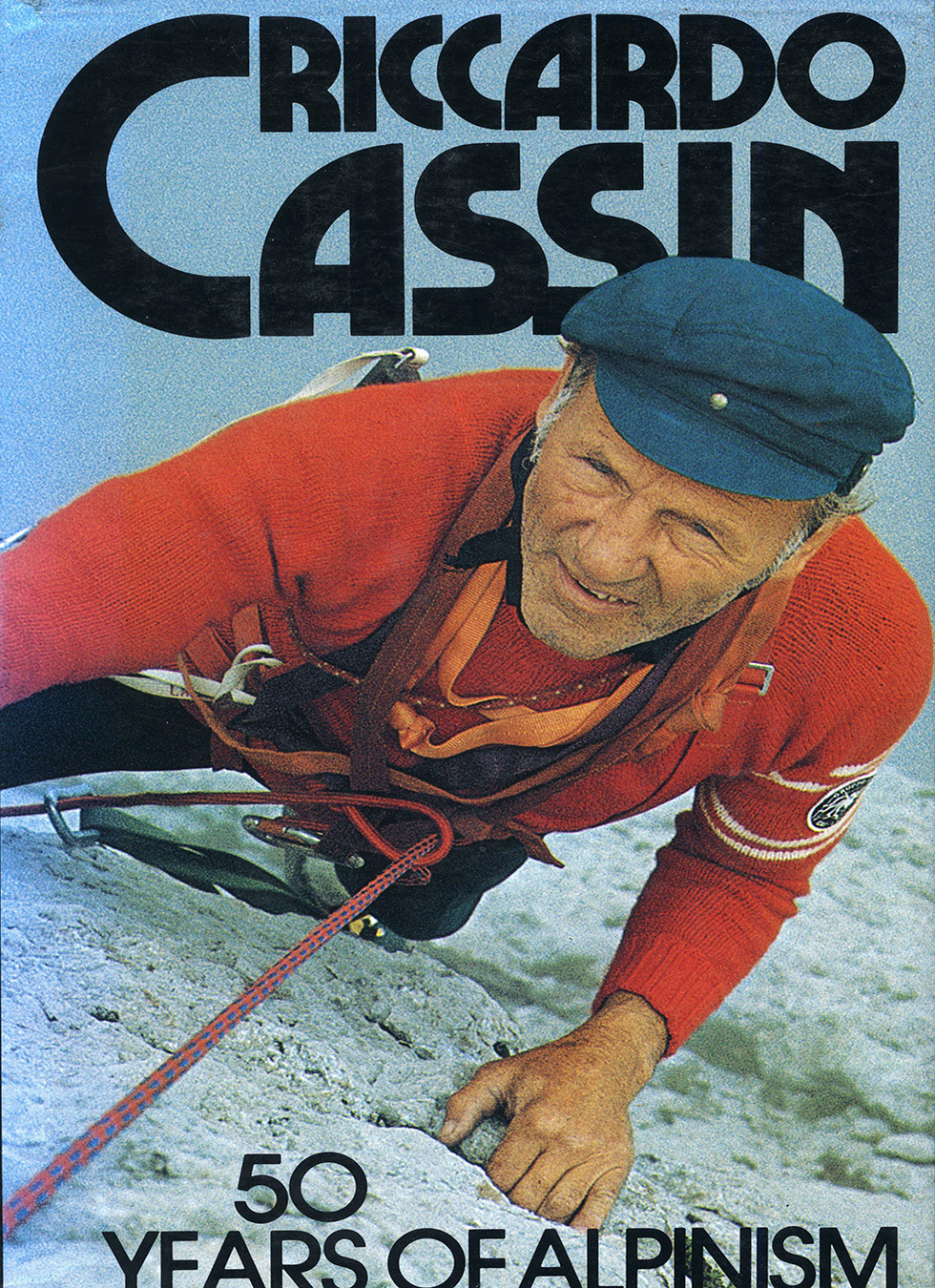 A brilliant riveting read in which Cassin recalls his life from humble peasant beginnings in the 1930s, through his major alpine first ascents, naturally progressing to pioneering expeditions on the world’s highest peaks. His epic account of triumph and tragedy during the first ascent of the north face of the Piz Badile warrants the read alone. Whilst the climbing remains centre stage, Cassin’s tales are peppered with glimpses and insights of the people and places in which he shares his adventure. This breathes life into the narrative and creates a vivid picture of the times. The photographs of Cassin in this book reveal a man of small physical proportions, but as he tells his life’s story, it becomes crystal clear as to why he was a giant amongst Alpinists. 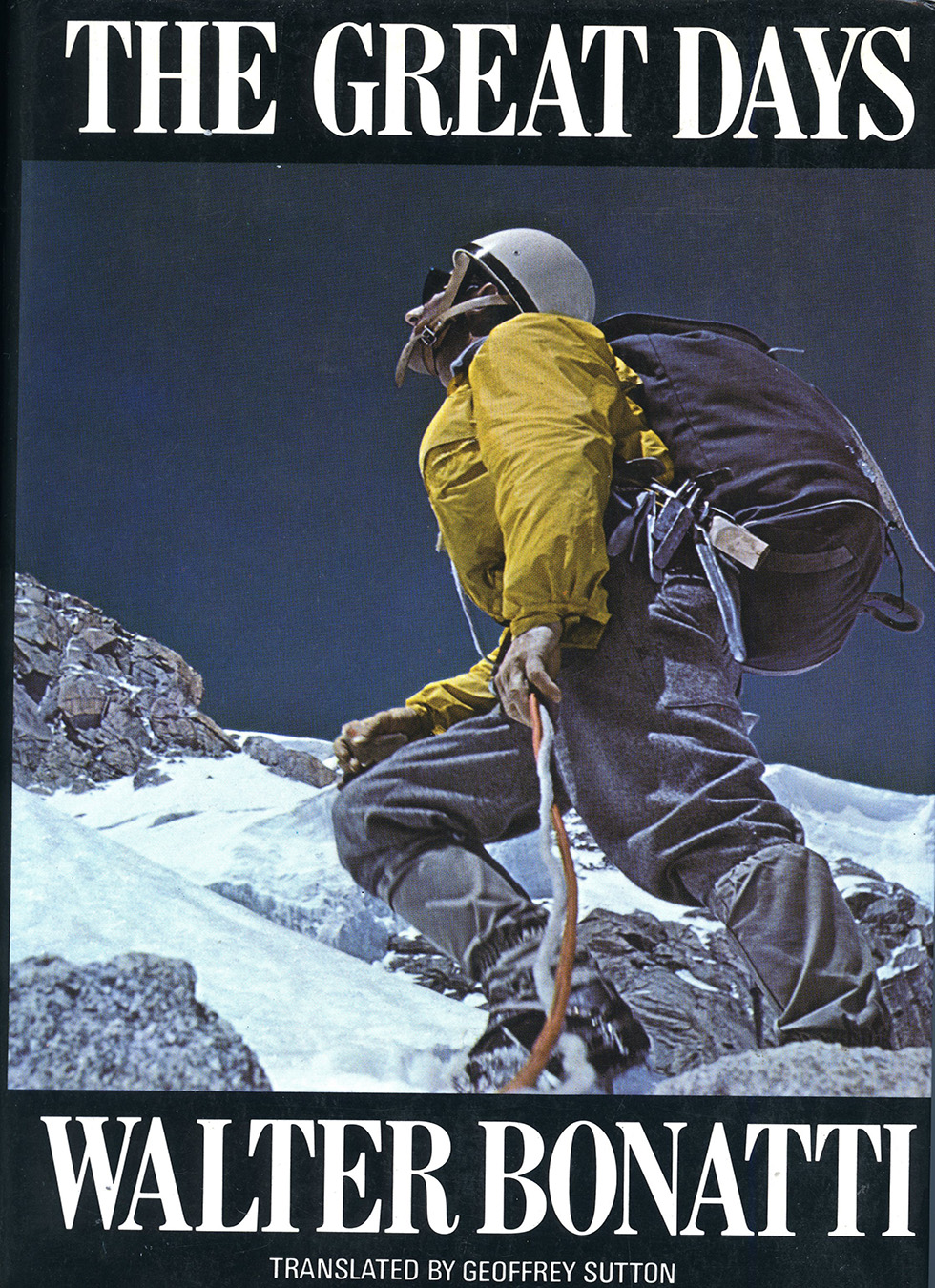 In this, his second climbing autobiography Bonatti describes some of his magnificent ascents as a maturing alpinist. He opens the book with ‘The Great Tragedy’ in which he describes the storm forced retreat from high on Mont Blanc’s Central Pillar of Freney during his first ascent attempt. This could stand as one of the greatest tragedies in Alpine climbing. Bonatti’s account is completely matter of fact and even in the knowledge of the final outcome, his writing leaves you willing and hoping the party will win through, even till the very end.  It’s harrowing stuff written from his heart.  In his writing, Bonatti reveals that he is a deeply philosophical man, as he tries to answer the elusive question ‘why’. He also reveals his sensitivities and it is evident through is closing words that he wasn’t immune from the attacks of his critics. 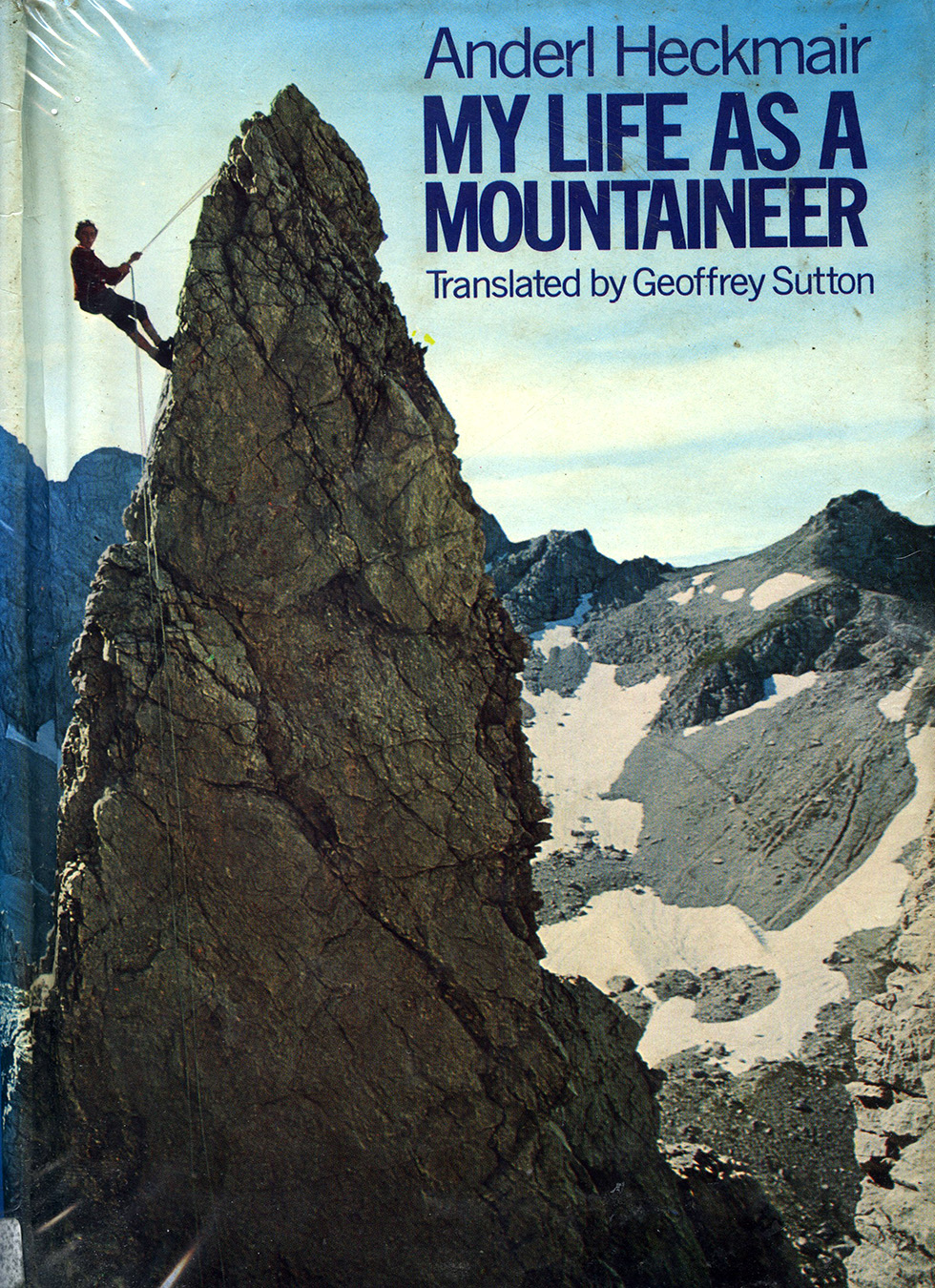 I haven’t read the updated version and my recommendation is based on the original. Heckmair follows the traditional format by describing his early years,  his development as an alpinist making ascents of cutting edge routes of his day and then moving on to wider explorations around the globe. Centre stage of this book, however, is his detailed blow by blow account of the first ascent of the north face of the Eiger in 1938. Heckmair was clearly the man of the moment during the ascent and his descriptions of some of his leads, often self-deprecating, leave you wondering how they survived the ordeal let alone succeed in their quest. Hackmair quotes the correspondence of one of the reporters who was watching the climb via the telescope from Kleine Scheidegg;  ‘they are all iron hard men’. I think this was probably an understatement. 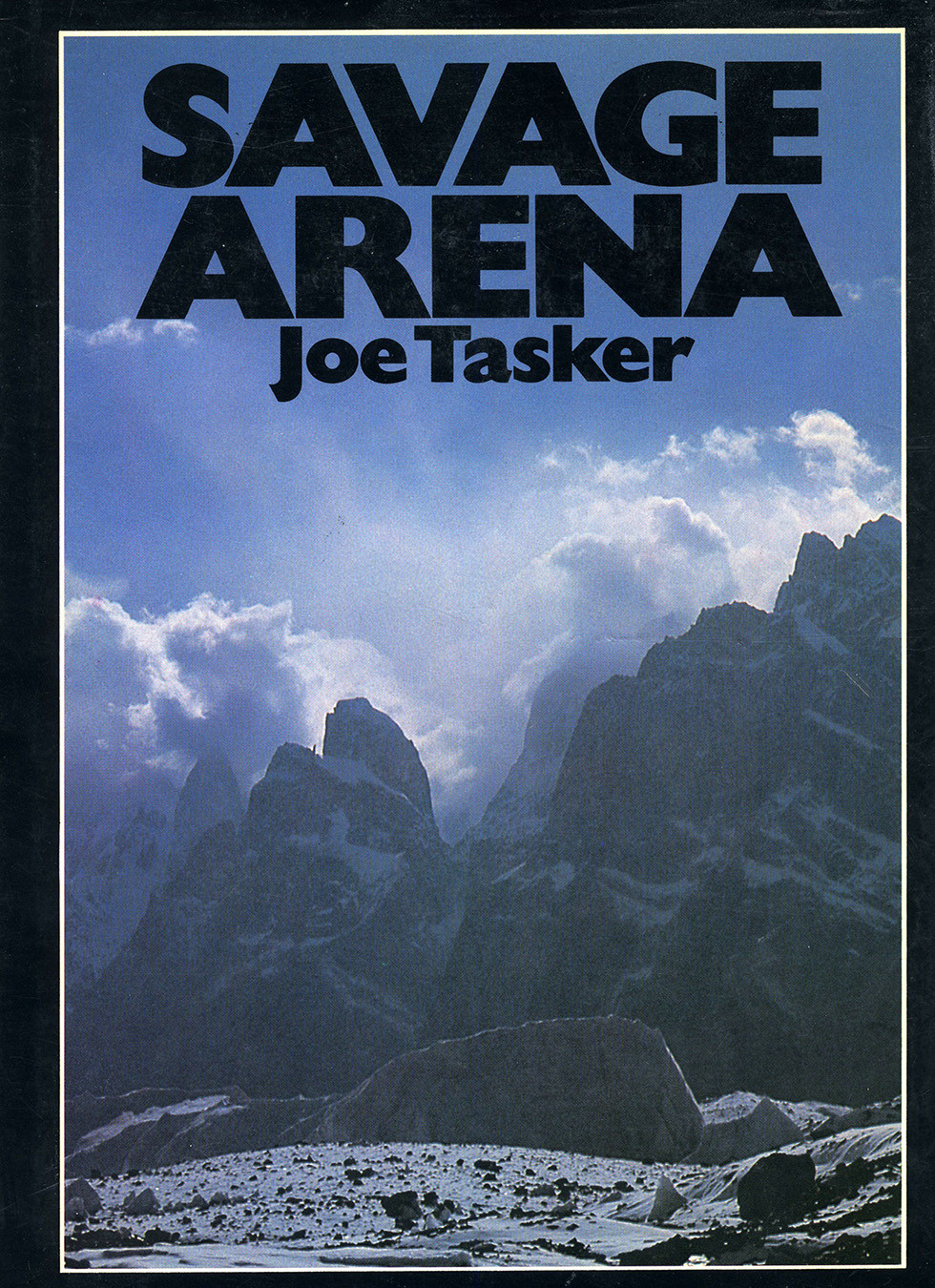 A brilliant account of hard Alpine climbing in the 1970s. Tasker takes us through an ascent of the Eiger’s north face with Dick Renshaw, but this time in winter. To quote Tasker  ‘We did not want to overcome a mountain with ease, we needed to struggle, needed to be at the edge of what was possible for us, needed an outcome that was uncertain’. This is quite prophetic and sets the scene for the rest of the book. We get an appreciation of what it means to take the Alpine-style approach to the ‘big mountains’ with some groundbreaking and epic climbs, which culminates with ascent of Changabang with Peter Boardman. As many will know, Tasker never saw this book in print. He was lost approaching the summit of Everest via the East North East Ridge in 1982 – so he left this book as a fitting literary legacy. 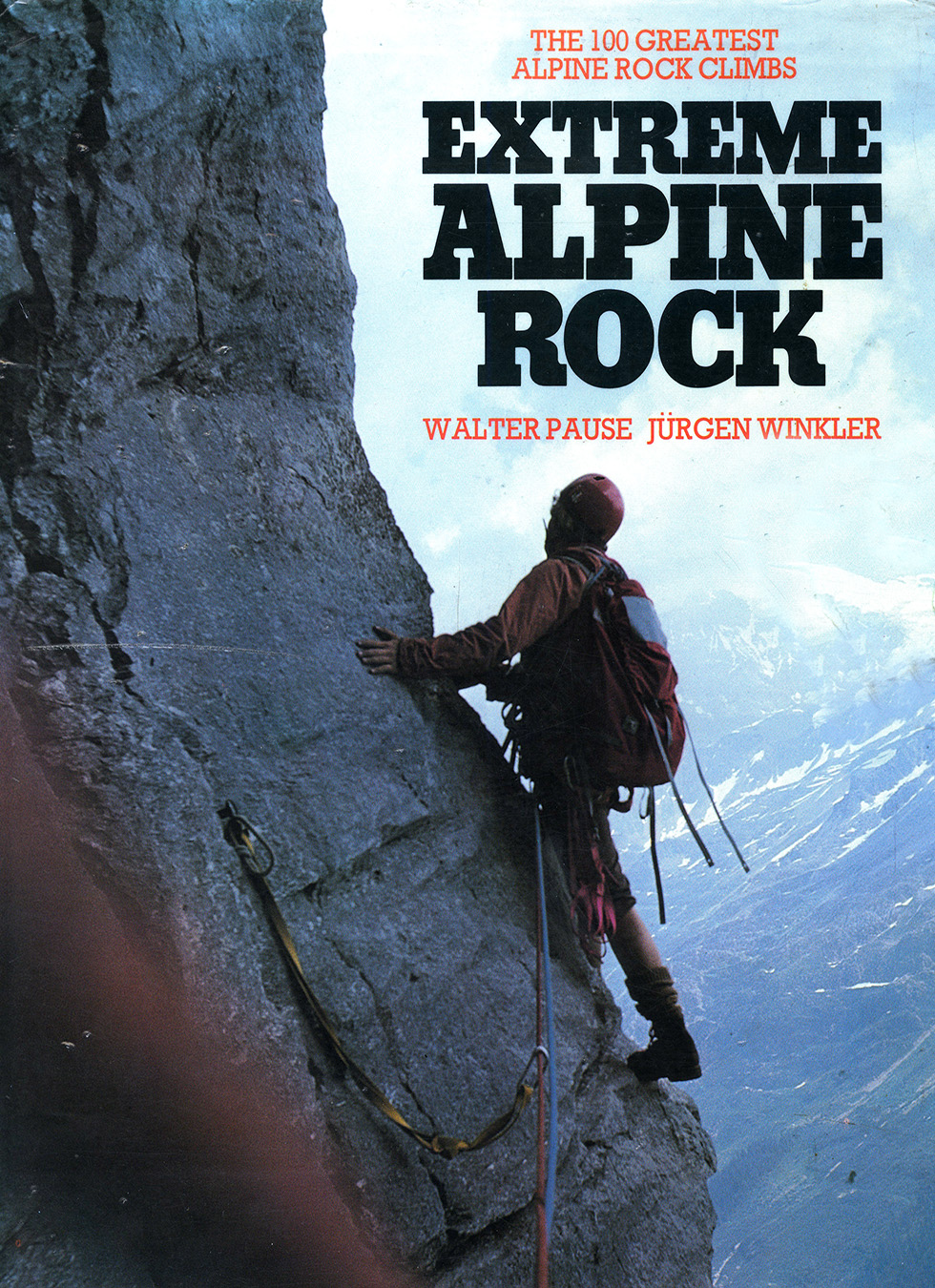 A coffee table guide book purportedly documenting 100 of the greatest extreme rock climbs across the alps. This book was first published in 1977 and many of the routes included are those which were pioneered during the golden era of extreme Alpine rock climbing, pre and early post WW2. In this sense, it can be viewed as an outdated book.  Some of the routes have been superseded by modern alternatives, or indeed different mountains. This said, some of the inclusions remain as classics. The passing of time and advances in free climbing has also rendered one or two, such as the Hasse on the Cima Grande into sought after historical routes, relevant to the modern rock climber. The 100 A4 black and white plates are beautifully presented and offer mouth-watering enticements onto these magnificent alpine precipices. The accompanying route descriptions are written in a style very much of their era, but when taken in the context of the time and style in which they were conceived, evoke drama and breathe life into each route perfectly. A book to be studied from the comfort of your armchair and leave you dreaming of adventure.

Master of Rock, the biography of John Gill – Pat Ament 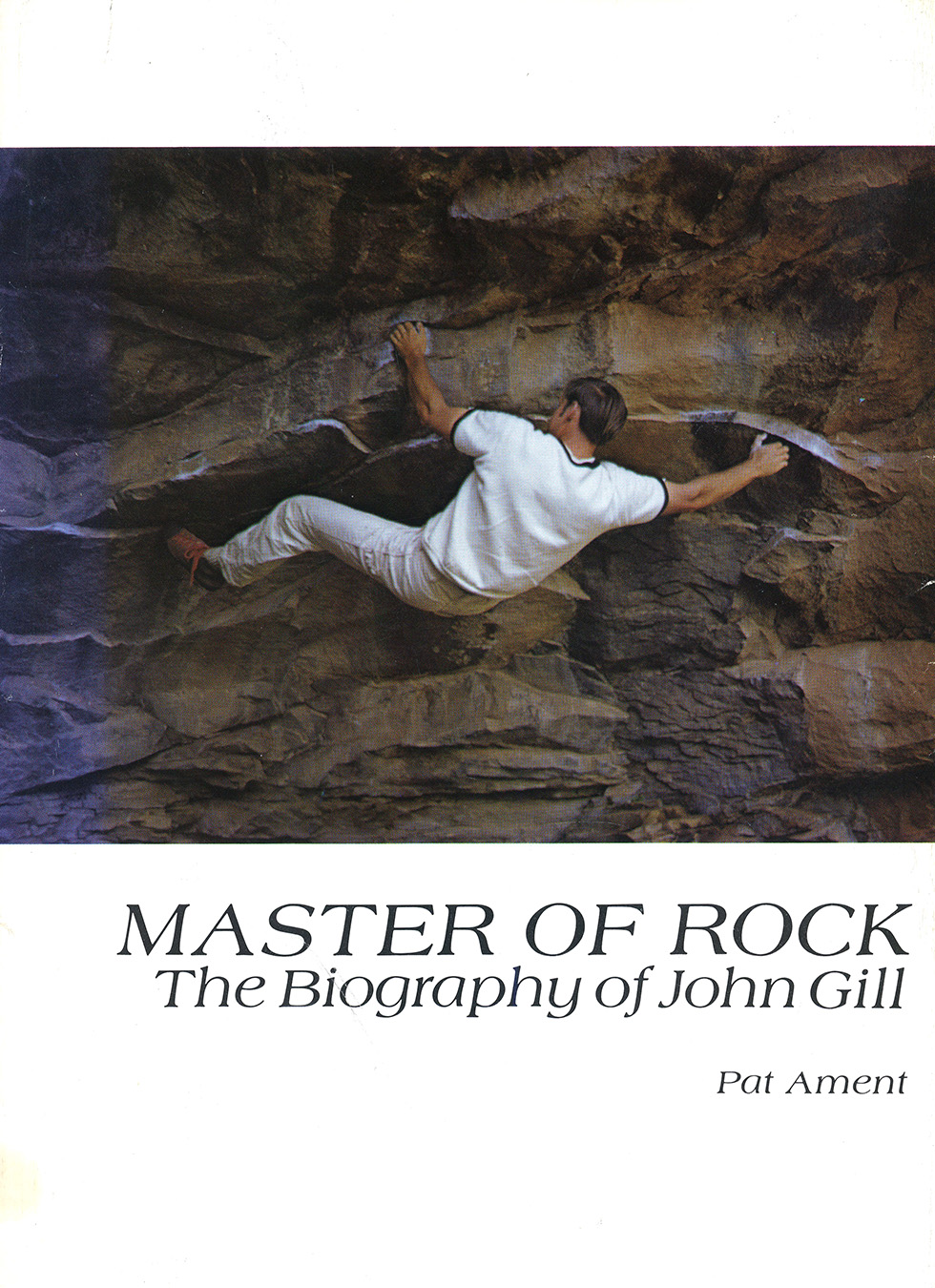 An unusual book completely dedicated to one man and his pursuit of bouldering. Gill explains his background as a gymnast, his approaches to training. He talks about his physical prowess, including his abilities to do a one arm front lever and multiple one arm pull-ups on a finger edge door architrave. In Gill’s day there were no crash pads and some of the accounts that we’re given, particularly of his highball ascents are ‘sweaty palms ‘stuff. The many black and white photographs enable you to view the action that Gill and Ament describe and provide additional clarity about what he accomplished. At times the narrative gets a little deep as were given insights into the metaphysical nature of Gill and his Zen-like approach, but these would appear to be important elements to Gill in his mission to master the ultimate moves on rock. Some really inspirational stuff here, even for the climbing wall monkeys. 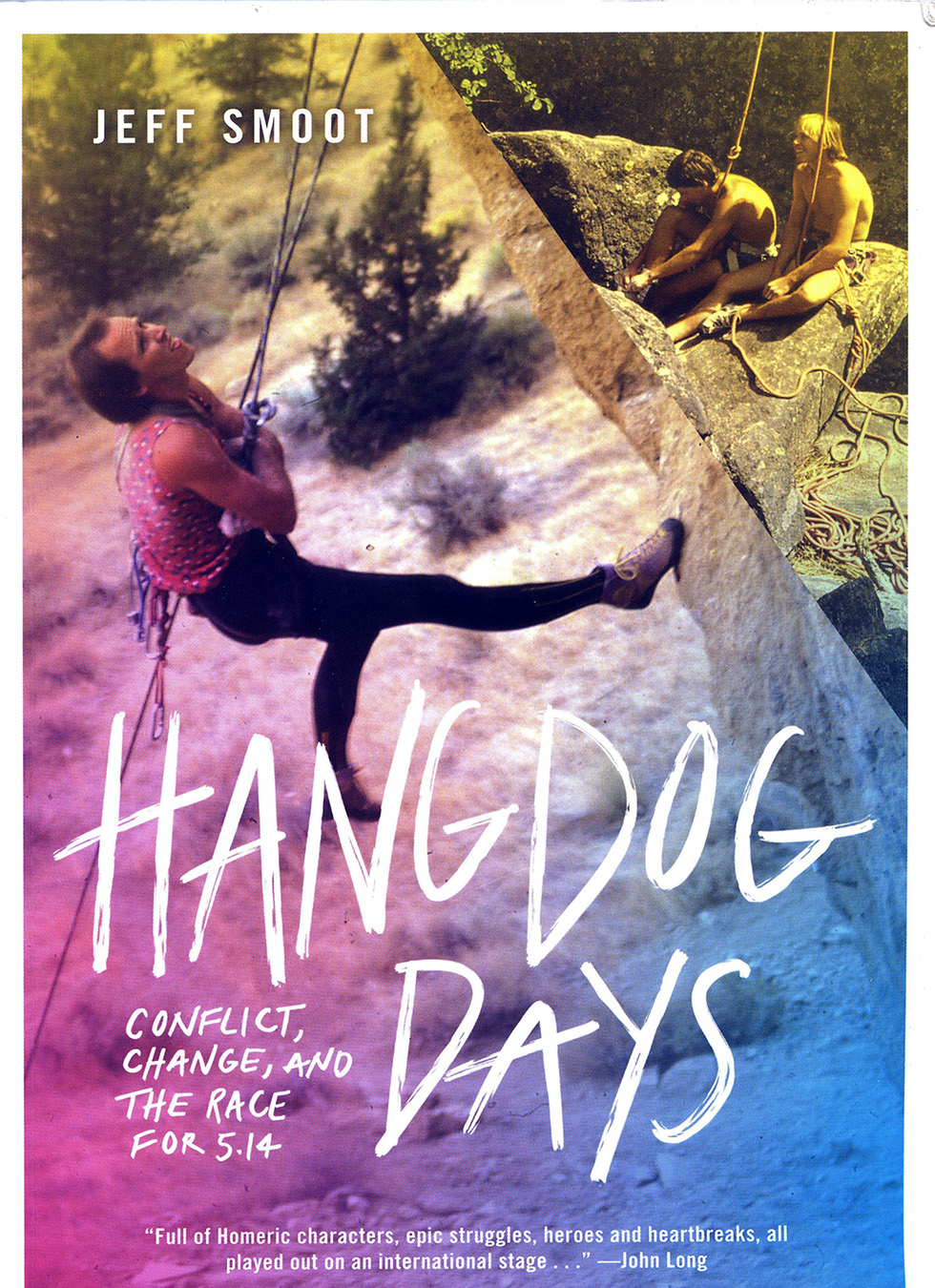 This book only came out last year, so can hardly be called a classic, yet. Smoot does capture a classic period in modern American rock climbing however as the inevitable European sport climbing approach starts to permeate and take hold in the staunchly defended ‘trad’ arena. Reading the book and you’re there in the moment, listening to conversations, sensing bitter tensions, feeling the rivalries as the various protagonists pursue and defend what has purpose and meaning for them in climbing rock. Jeff also gives us some poignant pen portraits of influential climbers who are sadly no longer with us. Charged with the full range of mixed emotions.

Other titles not to be missed: