Ian Smith takes a trip down Memory Lane to extol the virtues of one of the best Hard Severes in Cornwall.

Perhaps oddly, for someone who lives in Sheffield (one of the cities furthest away from the sea), I love climbing on sea cliffs, particularly on the granite in places such as Lundy, Jersey and West Penwith, Cornwall.  I discovered the classic cliffs of West Penwith: Bosigran, Sennen, Chair Ladder back in around 1980 and in those days guidebooks didn’t have star ratings so route selection was based on word of mouth or the introductory comments to the route descriptions. Pegasus was described, in the 1975 edition of the Chair Ladder guide, as ‘One of the best climbs at Chair Ladder’ so that was good. It was also mentioned in Classic Rock (published in 1978) in the ‘Other Good Routes’ section at the back of the book, although not included in the main routes selection. However, Pegasus had another appeal for me, the first ascent had been made by two Peak District climbers, Ernie Phillips and Ray Handley, and I was very aware of them and had climbed some of their routes before and knew they had a good eye for a line. 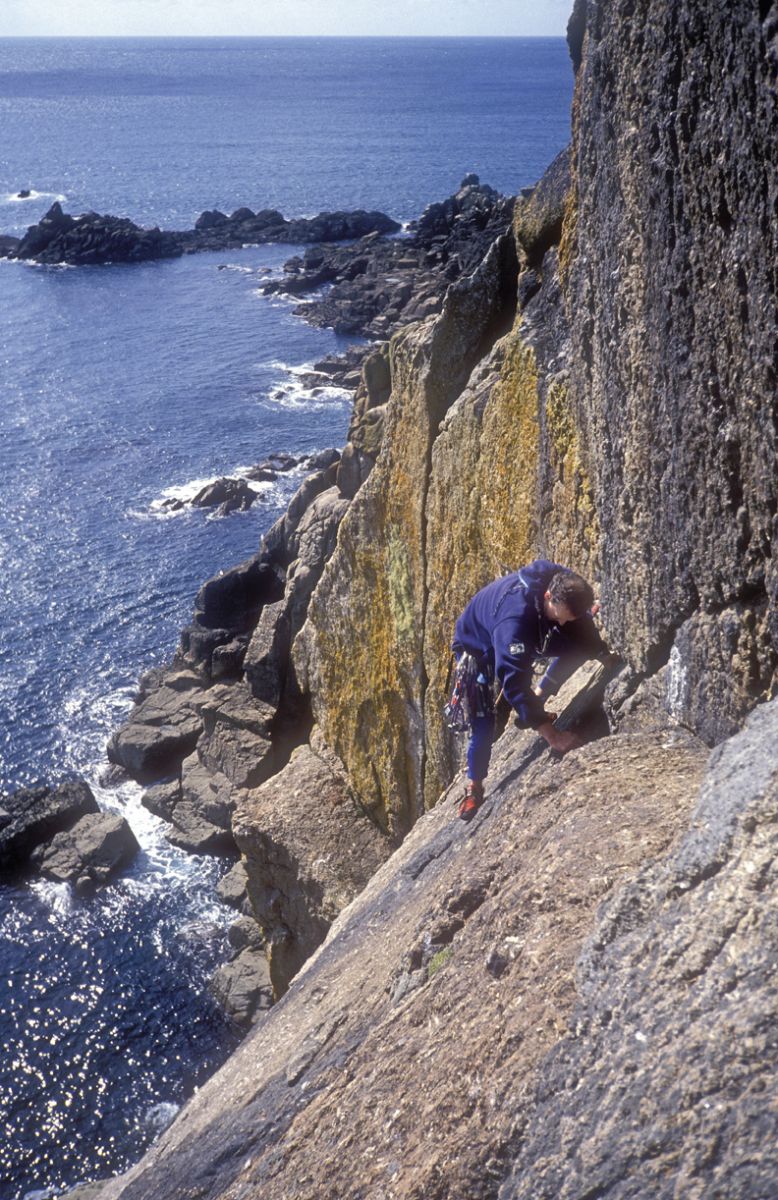 An ascent of Pegasus begins, for me and most others, in the car park at Porthgwarra Cove followed by the pleasant stroll up to the top of the crag passing the Coastguard Cottages. Bulging Wall is the furthest right of the main buttresses of Chair Ladder, flanked by Zawn Rinny. Stashing ’sacks at the top of the crag, close to the top of our route, and gearing up for the descent makes the most sense as the lower part of the descent is a steepish scramble. Begin by following a narrow path across the top of Zawn Rinny until slabby rocks, with the odd vertical step, leads down to the left (facing out) to sea level ledges. This isn’t particularly difficult but can be intimidating for novices and it’s straightforward to give a top rope to the nervous and then solo down.

The first time I climbed Pegasus was with my wife and I found it quite tricky for the grade, particularly on the second pitch making the moves around the overhang and the final pitch, but I loved it. Five very varied short pitches of immaculate granite beautifully situated on Bulging Wall, on the right-hand side (when looking out to sea) of one of the best sea cliffs around. I’ve since climbed it again a number of times with different partners and pitch 2, once you know what’s coming, feels straightforward, but that final pitch, with the mantelshelf and traverse, has always felt awkward, and still difficult to protect.

I must have been lucky but I always seem to have done Pegasus in the sunshine, not always a guaranteed commodity in Cornwall. I well remember an Easter ascent of the brilliant VS, South Face Direct, on the same crag where each pitch was completed with much shivering and hot aches at the belays. Also, luckily, although I could put it down to good planning and close reading of the tide tables but I’m not going to, I’ve always had a gentle sea lapping at the bottom the route. This is actually quite important as Chair Ladder is one of those places that are dangerous if a big sea is running for other than those highly experienced on sea cliffs.  My ascents have also been with a variety of partners and it’s been interesting to watch the reactions of inexperienced or nervous sea cliff climbers to the situation there and I’ve realized that not everyone relishes being as close to the sea as I do. Interestingly, this doesn’t seem to relate to climbing standard, I’ve done the route with people who climb at a much higher standard than me, who have been much relieved to actually get onto the route and away from the sea level ledges. The atmosphere of sea cliffs, the sounds, the smells, the colours, must not appeal to all in the way it does me.

The route begins with, technically, the hardest pitch up a corner to a ledge although, oddly, I’ve never found it the most difficult pitch. Pitch 2 tackles the intimidating-looking overhang, but it is furnished with superb, big holds and leads to a black wall which gives the guidebook pitch 3, but it is possible to run these together. Above is a slab with a curving corner on its left and this gives pitch 4 and is one of those completely brilliant pitches that you just wish was much much longer, sadly it’s not but it’s still a cracker. So to the final pitch, where the angle changes (steepens) and also the rock character as this section takes a band of black rock as opposed to the orange granite of the slab/curving corner. As already mentioned I’ve always found this pitch awkward, partly because of the sudden steepening, but it’s a bit tricky to see your feet on the bulging leftwards traverse and also awkward to place gear, although it’s a lot better with cams rather than nuts. At the end of the traverse you must then climb directly up to the top and unless you’ve placed your gear carefully you may suffer bad rope drag so I’ve always made sure I’ve done it on double ropes.

So, there we have Pegasus, one of the great classic Severe routes of West Penwith, easily on a par with Doorpost (Bosigran) and Demo Route (Sennen) at similar grades. The latter two routes are much less tide dependant so remember to check the tide times if you fancy Chair Ladder. If I’ve tempted you then the Classic Rock routes of Terrier’s Tooth (currently given Hard Severe or V Diff depending on which first pitch you employ) and Pendulum Chimney are great, as is Flannel Avenue at Severe. If you fancy upping the ante then Chair Ladder has some quite superb VSs: Seal Slab is next to Pegasus and has a fabulous first pitch; Diocese on Bishop Buttress is tough but brilliant with a traverse on pitch 2 which is 5a and, of course, South Face Direct is one of the best VSs in the whole of the South West.