I had wanted to do a new route up the large right face of the open book corner high above the campsite in Orco (Italy) since I had first arrived in the valley. My climbing partner, Tom, had already looked over at the face from the neighbouring corner system and told me that it looked about E4 but a little loose, like Right Wall but mixed with the Lleyn Peninsula.

‘The second pitch up and the lead switches. Tom puts me on belay and I unclip from the hanging corner belay. Now on the sharp end, the wall starts to look even more daunting, but I’m excited by the prospect that I’m treading where others haven’t. The first half of the pitch passes calmly and involves delicately traversing on thin flakes, protected by fragile micro-wires. Even though ropes are loose and rarely clipped, banter and laughter is still exchanged back and forth from the belay. Teetering out to the thin crack line in the middle of the face, the wall only bulges gently but the climbing becomes surprisingly pumpy as I halt to fiddle in gear. Halfway up the pitch, I come across a perfect vertical slot, surrounded by loose toaster-sized blocks which fit a Friend #3 and a purple Alien, the best gear on the route so far. Hands eventually find a suitable blocky jug to lean back from, rest and place protection. I lean back, the block jolts, and in slow motion, but with ever-increasing speed, it starts to slide towards me from its perch. I fumble with my hands trying to grab the flakey rock around it before it falls into my lap and pushes me off. The block stops but I know the holds I’m now on won’t hold weight for much longer. I need to rest so opt to hand jam behind the block that is now half on, half off its little ledge. Again it shifts, but with a small amount of pressure change in the jam, a semi drop knee and an arm wrap over the top of the block I’m able to shake out and re-psyche. When I eventually leave my rest block from halfway up the pitch the next 20 minutes of climbing become one of the most intense and memorable climbing experiences I’ve ever had’. 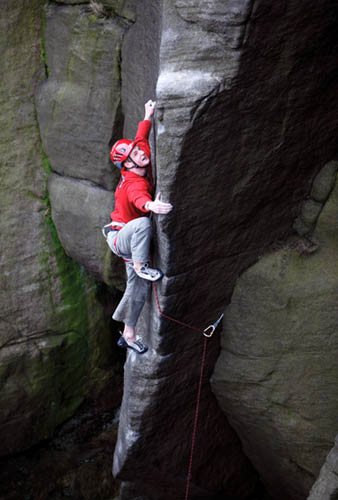 Within climbing I have a few different obsessions, but one that rules over the rest is being a ‘new router’ or making a first ascent, I’ve done quite a few new routes, some could be considered a little disgraceful but others are some of the best lines and routes I’ve climbed anywhere in the world. It has become a big part of my climbing over the last five years, so I thought I would talk a little about the game we play as new routers as I’ve never read anybody else’s thoughts on it before. When I talk about ‘new routers’ I am talking about the people who climb to seek out the new routes, the ones that are constantly looking and won’t go home until they’ve ‘just checked around the next corner’ rather than those who happen to come across them when casually passing by. I’m actually a little unsure what sort of people these are as I am one of them for a start and I find it hard to describe myself. But as one of my very good friends is as enthused about it as I am I’ll find it much easier to describe him instead (no names here). If you find yourself fitting into this category maybe its time to stop that 15-year project down at Raven Tor and get scoping out the good stuff.

So, for starters you need to be as daft as a brush, because for sure you’ll end up doing far much more searching and walking than actually climbing and as we’re climbers this seems like a pretty silly thing to do. Also how do you know it’s possible? Nobody has been up there before. Sometimes you need the stupidity of a Burbage sheep to think it’s feasible and carry on. A competitive streak needs to run through you. On new routes that have the potential to be big projects there may be more than one person trying it, this could even be your climbing partner, so you may need to be feisty and have killer instinct… literally.

You need to be able to put up with disappointment as your next Ma Dalton spied from across the valley becomes increasingly more like a tottering pile of choss as you get closer. For virgin new routers, this can happen on a very regular basis, or in my case, alarmingly often. You have to be prepared for the unexpected, this could mean anything but, for example, there will be many a time you put all the hard work into your ‘new E5’ only to find out it was soloed years ago by Fawcett in EBs and short shorts and given E3. You need to be content with the fact that at some point in your new routeing career your routes will get increasingly worse. Friends, family and strangers you’ve never seen before, will laugh of your idiocy as you tell them your next big project is the graffiti-covered bridge at the side of the M6. Incredible motivation is needed to overcome these difficult times. Motivation is also needed to overcome your own mistakes. I recently went out to climb a new route, one which would have taken 10 minutes to clean and brush with proper equipment. However, I forgot my brushes and ended up spending over an hour brushing lichen off the rock with a stick.

So if you have to put up with all this negativity and disappointment all the time when new routeing, what’s the point and why do I and others do it? I enjoy it for the journey or the experience. I find the whole scenario much more satisfying than going out and repeating what’s already been done and what is already trodden ground. I like the whole process of new routeing, the journey of searching, finding, (maybe cleaning and working) then eventually climbing it. After you’ve done it, it’s like a stamp, a mark that nobody can remove or take away; a piece of history. I like the idea that I’ve left challenges for future generations to have a go at. I can say for myself and hopefully speak for all new routers here, that my best climbing memories are those where new routeing is involved. You end up going to extraordinary lengths to do new routes that it produces unforgettable experiences. The experience I had on the second half of the new route in the Orco Valley was one I will never forget.

‘From my hand jam behind the wobbly rest block I can see the final half of the route might take some wires, but every time I quest higher to a thin flake that looks as if it might fit gear it crumbles and the handholds are too weak to stay on long enough to fiddle with wires. Tom’s words of encouragement from the belay have long since disappeared and with a head full of fear, ropes start to feel increasingly like bits of cord tied around my waist as gear became further distant. I can’t see a suitable belay and I’m ridiculously run-out, at that point I have never felt fear on a climb like it, I am so close to crying through being scared, I’m whimpering. I somehow manage to overcome the fear and eventually reach a ledge which tips towards me. With my whole body involuntarily quivering I mantel the sloping ledge which, when stood on, I realize is holding up the whole second half of the route on which I had just been so run-out. Quickly scampering up the now easier-looking top section, I find a suitable belay and, eventually, respite’.

This is an experience I will always remember and have taken away to other scary or run-out routes I have done. Due to the nature of on-sight new routeing I don’t think I would have come across this situation on an established route, which is a concluding reason why I value new routeing and find that its journey to be so demanding, absorbing and educational. So if you’ve got the motivation, feel adventurous and are as daft as a brush, leave Stanage Popular End and get exploring, it’ll be a good day out… maybe!