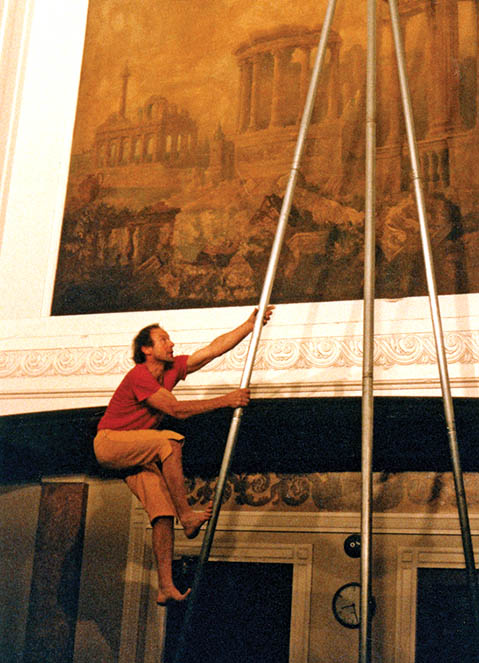 When David Craig and I started planning the first festival on our 1987 journey to climb on the sea cliffs of Anglesey in North Wales, we wanted to include elements that remained central to the experience which I tried to provide at every festival over its 21 years of life. The celebration of new work was the original impulse and perhaps we can be forgiven if some of that new work was our own. Nobody else was going to arrange readings from David's classic book Native Stones or my first collection of poetry, The Stone Spiral. Being climbers, we were imbued with the spirit of 'just do it!' In the event, I only read one poem from my own collection as an introduction to inviting other poets in the audience to read a poem of their own. (Ten years later I could invite David to read from his new book Landmarks, although fear of cries of 'Foul' prevented my programming a reading from my own latest collection, The Rope, even though every poem was a climbing poem.)

We were also aware of the imminent return to England of Ed Drummond and rumours about a book being on the way from him (A Dream of White Horses), so we invited him to do his poetry reading performance whilst up the pole (actually three poles – a 40ft high tripod with a small platform at the top).

Women's writing about climbing was even rarer in those days than it is now and we wanted to offer encouragement to it, so we invited Marjorie Mortimer to give us what turned out to be an amusing, mocking talk about what she called 'The Mine Is Bigger Than Yours' display in men's climbing writing. We have always had at least one woman speaking at the festival, and memorable contributions they have been, such as Jill Lawrence's feminist analysis of the climate of magazine publishing for women climbers followed by octogenarian Janet Adam Smith saying stridently: "Well, I've never experienced any drawbacks in being a woman." We could quite believe that this was true in Janet's case, if not for her argument in general. Another memorable combination was that of the late Alison Hargreaves and Alison Osius, Senior Editor at Climbing magazine (now with Rock & Ice) whilst visiting from the USA to talk about writing profiles of mountaineers. Alison Osius was actually writing what was to be the last interview profile of Alison Hargreaves, a tribute the festival was pleased to have made possible.

We have always felt that the festival should be fun if climbers are giving up a whole Saturday to be talking about it instead of doing it. (This must have been the only festival in the world that prayed for rain.) At our first event Mike Mortimer gave us a quiz to test our knowledge of the literature. This was wittily devised and is published (with the answers, of course) in the book of the festival papers from the first five years, Orogenic Zones, published by Bretton Hall College. The fourth festival featured a play devised by local school students using a specially erected climbing wall. For one festival, Rosie Smith and Celia Bull revived some of Tom Patey's songs and for another they wrote their own. Among the more bizarre ideas to inject a little fun into the festival was one that arose out of a pub conversation with the then young hotshot, Johnny Dawes, who had just sat his final exams at university and was enthusing about what a buzz they had been. So, when people ordered their tickets for the sixth festival they were invited to set an exam question for Dawes. At the opening of the festival he was given the exam paper of 14 questions from the audience and sent away to write an answer to one of them for a reading three hours later. He chose the question 'My First Time' and duly returned to carry off the reading of his paper with characteristic imagination, wit and flair. On two occasions humorist, Steve Ashton, gave theatrical performances that took the audience by surprise. At the 10th festival, he was a climber in a mental hospital in conversation with his therapist. This was both very funny and extremely moving at the same time. 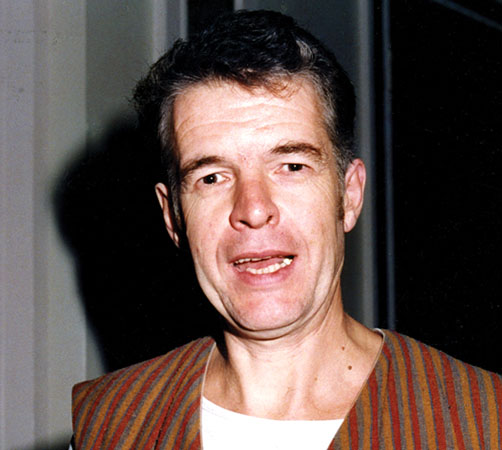 The fourth element of the first festival that became a cornerstone of our planning was controversy and debate. Dave Cook's lecture at the first festival threw out a challenge to mountaineering literature to be more inclusive (of women, young activists, climbers from minority ethnic groups, foreign literatures), more connected to climbers’ wider lives (as workers, lovers, and political, even musical, creatures) and more expressively experimental in form. We regularly commissioned new poetry, from septuagenarian Guy Kirkus, the brother of Colin Kirkus, for example, and from the festival's popular discovery, the young feminist climbing poet, Kym Martindale. We also tried to commission new work from younger climbers. Fourteen-year-old Chris Briggs, who read his poem 'Doomsville' at the fifth festival, held the record. At the 10th festival, bold young activist, Paul Pritchard, took the audience by storm with his writing about the Llanberis rock-climbing scene with the result that publisher Ken Wilson was not talking about if he was publishing Paul's book, but when he would be publishing Deep Play, which went on to win the Boardman Tasker Award the following year.

Debate was lively each year following the adjudication speech by the Chair of the Boardman Tasker judges. At that time this was the only public opportunity to hear this speech and to hear the winning writer read from his or her book following the press announcement at The Alpine Club in London. By the time the short-list had been announced opinions had formed about what ought to be the winner and views could be aired in the presence of the Boardman and Tasker families who were reminded annually of the seriousness with which this award was coveted by writers and publishers in the audience, to say nothing of the seriousness with which the bibliophiles in the audience held opinions about their reading of the entries. Of course, one ought to say that a specialist bookshop run by Jarvis Books of Matlock, did a good trade in providing books to be signed by writers present for the day. For Grant and Val, great supporters of the festival, Christmas always came early.

Finally, the international dimension, which was begun in a unique and topical manner by Waclaw Sonelski's lecture on 'Climbing in Poland Under Communism', produced a series of authoritative papers on the mountaineering literature of France from Anne Sauvy, and of Italy from Mirella Tenderini. Allen Steck gave us an insight into the secrets of keeping up the innovative standards of Ascent. (Much of this seemed to do with Ascent's having its own wine label.) Then, also from the USA, Mikel Vause (famously named by Maggie Body ‘Full Dome’) shared with us his PhD research into mountaineering literature, Of Men and Mountains, and Pete Sinclair, who explored for us his thinking about access to wilderness after writing his book, We Aspired, came back each year simply to sit in the audience because he had found the festival so much fun on his first visit. Singer and storyteller, Sid Marty, also travelled more than once from Canada to amuse the audience with his deadpan wit.

Despite the international stars who talked about their writings like Chris Bonington, Doug Scott, Stephen Venables, Kurt Diemberger, Paul Piana, Doug Robinson, Pat and Biaba Morrow, the show was often been stolen by the old-timers like Tom Weir from Scotland and Charlie Houston and Bob Bates from the USA, or the unexpected discoveries such as Irish storyteller Dermot Somers and retired Hodder and Stoughton editor, Maggie Body. Indeed, the unpredictability of the event was perhaps part of its charm. However, this should not suggest that the organisation itself was unpredictable. We prided ourselves on running an event where things happened on time and, with very little sponsorship income, on keeping ticket prices as low as possible. A number of people were stalwart supporters of the festival throughout the years. The late and hugely missed Paul Nunn, especially in the early days, lent our discussions his idiosyncratic wisdom and widely respected authority. Jim Curran was always on hand to debunk any pretensions or drop his papers on the floor and reshuffle them for his talk. Ian Smith annually rehearsed his very professional readings from the winners of the Festival/High magazine writing competition. In addition, late in the festival day we opened an exhibition of original mountain paintings as a break from the festival's intense pace. We were delighted to find that the festival could offer hospitality to passing luminaries, such as Harish Kapadia, Editor of The Himalayan Journal, so that they are able to honour the festival with their presence whilst they were attending events elsewhere in the UK. 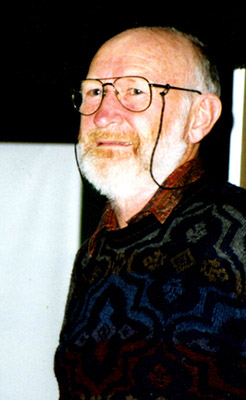 We found ourselves consulted in the setting up of similar mountain literature festivals in other countries, such as the Banff Mountain Festival in Canada and at Passy in France. New activities started springing up around the festival. A group of women climbing writers who met at the festival each year began running a weekend writing workshop prior to the festival. Their occasional publication, Women, Mountains, Words, is still appearing and four of those women have produced their own books at the last count. We were able, as a result of the generosity of the Paul Nunn Memorial Fund, to recruit from the USA one of Mikel Vause’s former students, Kaydee Summers, for the Paul Nunn Scholarship to begin a PhD student researching mountaineering literature.

When Bretton Hall closed as a campus of Leeds University the festival was welcomed into the arms of the Kendal Mountain Film Festival but a one-day book festival could not find a satisfactory place within a weekend film festival and our traditional loyal audience, faced with too many choices at Kendal, faded away. Twenty-one years of running an annual one-day festival seemed like a good time to retire from the job and the festival closed.

Dave Cook's polemical lecture at that first festival had become our manifesto and a standard by which we could evaluate ourselves each year. Dave Cook concluded by quoting the Lake District poet Norman Nicholson with a quotation that is a useful reminder of why we continue writing and reading about our sport: 'Mountains should not serve as an escape from reality. They are surely an escape back to reality'.