One of the great modern mixed winter classics, Vertigo Wall, described and photographed by Guy Robertson.

Like most things in life, on the face of it at least, climbing is always subject to progress. Today’s superstars will soon be tomorrow’s old timers, and today’s cutting edge testpieces will be tomorrow’s trade routes. But genuine quality, surely, resists the ravages of time. Like the great built monuments, the great timeless songs and the great works of art, the really, really classic routes – their history and their character – tend to remain forever. They are still there – and for the most part always will be – to be relished by anyone looking for something special beyond the particular fashions and watermarks of the day.

It is widely recognised that when Vertigo Wall was first climbed in summer it was a psychological breakthrough. The first winter ascent in 1977 was a watershed mixed climbing event. Yet there seems little doubt that such an enticing line of weakness up such an appallingly steep and gut-wrenchingly exposed wall on the most enigmatic of Cairngorm cliffs would have for many years previously tickled the imagination of even the most stalwart of Scottish traditionalists. As it was, it took a pre-bearded Andy Nisbet (at an impossibly young 24 years of age) the best part of two days, one night and several points of aid to open the book on Scotland’s greatest ‘modern’ mixed climb (apparently as little more than a training mission for greater things out in the Alps). The term modern, however, is used guardedly in this instance, for this is no place to expect a jolly old yard-fest on steep, well-protected rock. On the contrary, in fact, as any one of its four sustained and potentially icy pitches may turn out to be your crux. 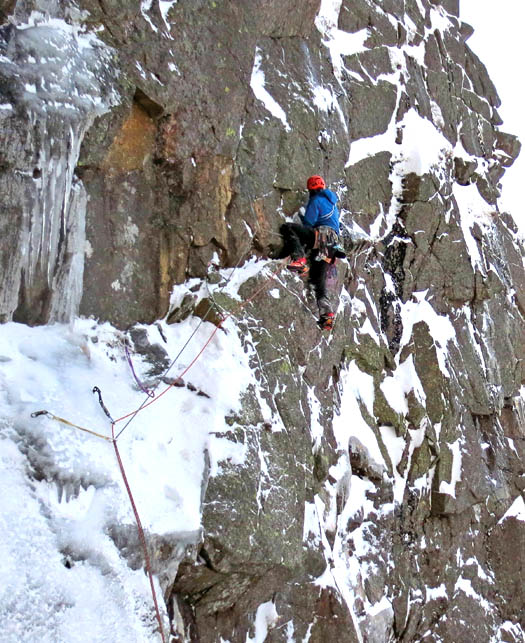 I first took a fancy to the idea of climbing Vertigo after hearing tales of Rob McAllister and Dave McGimpsey’s long overdue second ascent in 1998. At the time I was focused on hard repeats, so any route of such obvious quality that had remained unclimbed for more than 20 years seemed especially appealing. The fact that it was a mere three hours to the base of the route from my home in Aberdeen certainly helped. More enticing still was Nisbet’s bold assertion that it was: “A contender for the best mixed route in Scotland.” The red rag was waving and the bull was ready to charge.

As with many of the best winter routes, for me Vertigo didn’t come easy. On the first attempt, an element of youthful over-enthusiasm saw my partner and I arrive at the bottom of Central Gully in nothing short of a maelstrom with guts and brains full of whisky. Too dangerous and too much like hard work, a route like this had to be savoured. And so it was that a quick visit on my own a few days later by way of reconnaissance confirmed the ice was there and conditions were perfect. Rob Goodyear was duly lined up for a more business-like attempt the following weekend, and the Saturday found us up in the depths of Central Gully once more, this time gearing up under a crystal clear sky.

Standing at its base, it’s easy to see why this is such a revered and historically important winter climb. Local legend has it that it’s the one big Scottish winter line that Mick Fowler has yet to climb. Carved deep into the right retaining wall of the gully, a vast and impending scoop looms most ominously, the angle exaggerated by a confusion of Damoclean ice fangs festooning its upper half. At first appearances it looks manifestly impossible, but the geology is misleading. Closer inspection reveals a vague snowy ledge dwindling right to gain a snaking line of weakness weaving first left then back right towards an ice-choked chimney high up. Above this the way isn’t clear, so a slice of uncertainty adds to the sumptuous cocktail of turf, rock, snow and ice.

Consider for a moment that this is one of only two winter routes taking direct lines up arguably the best cliff for modern Extreme mountain rock-climbing in Britain – not unlike having two four star winter routes up the heart of Scafell’s East Buttress. The other route, Goliath (VII,7) has only seen two recorded ascents (within two days) and remains elusive to even the most seasoned of Dubh Loch regulars. Vertigo, on the other hand, is regularly in good condition, at least until mid-February when the sun can strip the top half. Only the third pitch needs ice, and it has been climbed when this is minimal. But this is a place and a route to take a chance on, so if it’s well-frozen and the ice is glistening then go for it, you won’t be disappointed.

The first pitch traverses the ledge and tackles a stubborn little corner on blobs of frozen turf – the kind of pitch that you grab because it looks easy but with the potential to slap your bleary-eyed face. The second pitch looks equally innocuous, but is that little bit harder still, with enough bulges, verglas and often not quite enough protection to require stepping up a gear. Route finding is not particularly difficult, but very rewarding, a continuous band of overhanging rock forcing you to weave blindly back right and on up awkward, wide and snowed-up cracks. These lead with a struggle to a generous alcove below the beckoning blue ice. Pitch 3 is true class – in perfect conditions a constricting ice-choked chimney will pop you out onto a vast icy canvas, the ground beneath dropping away sharply into a hundred metres of space. In less than perfect conditions, however, you may find yourself teetering boldly rather than romping safely, no doubt amplifying the tremendous exposure that engulfs this particular place.

The third pitch ends comfortably, again, below a steep slab on the left which marks the way forward. If this is well-iced, count your blessings, as more often than not it requires a delicate touch and offers little in the way of protection. At the top of the slab it’s once more back right, and once more that sickening drop starts tugging away at your feet. This time, however, there’s an added little surprise. In order to gain those Thank God turf ledges five metres or so to your right you’ll have to drop those axes and grab the top of that huge booming flake, feet skittering on very little and hand-traverse your way to glory. Although it’s not technically too demanding, grown men have come close to tears on this mind-blowing pitch. Once across the great flake you are quids-in so chill out and enjoy the exposure. All that remains is to carefully pick out the easiest line up through the jumble of icy blocks to the summit plateaux above.

Assuming there’s still some daylight to spare, hurry on back down Central Gully to your rucksack and some well-earned fodder. The view of the route in profile on the descent is truly a sight not to be missed. It is from this giddying perspective that you’ll really appreciate why the route deserves its name. And if you’re of an exploratory disposition then be sure to cast your eye on further down the wall, and marvel excitedly at what may well in time become the great classics of tomorrow…