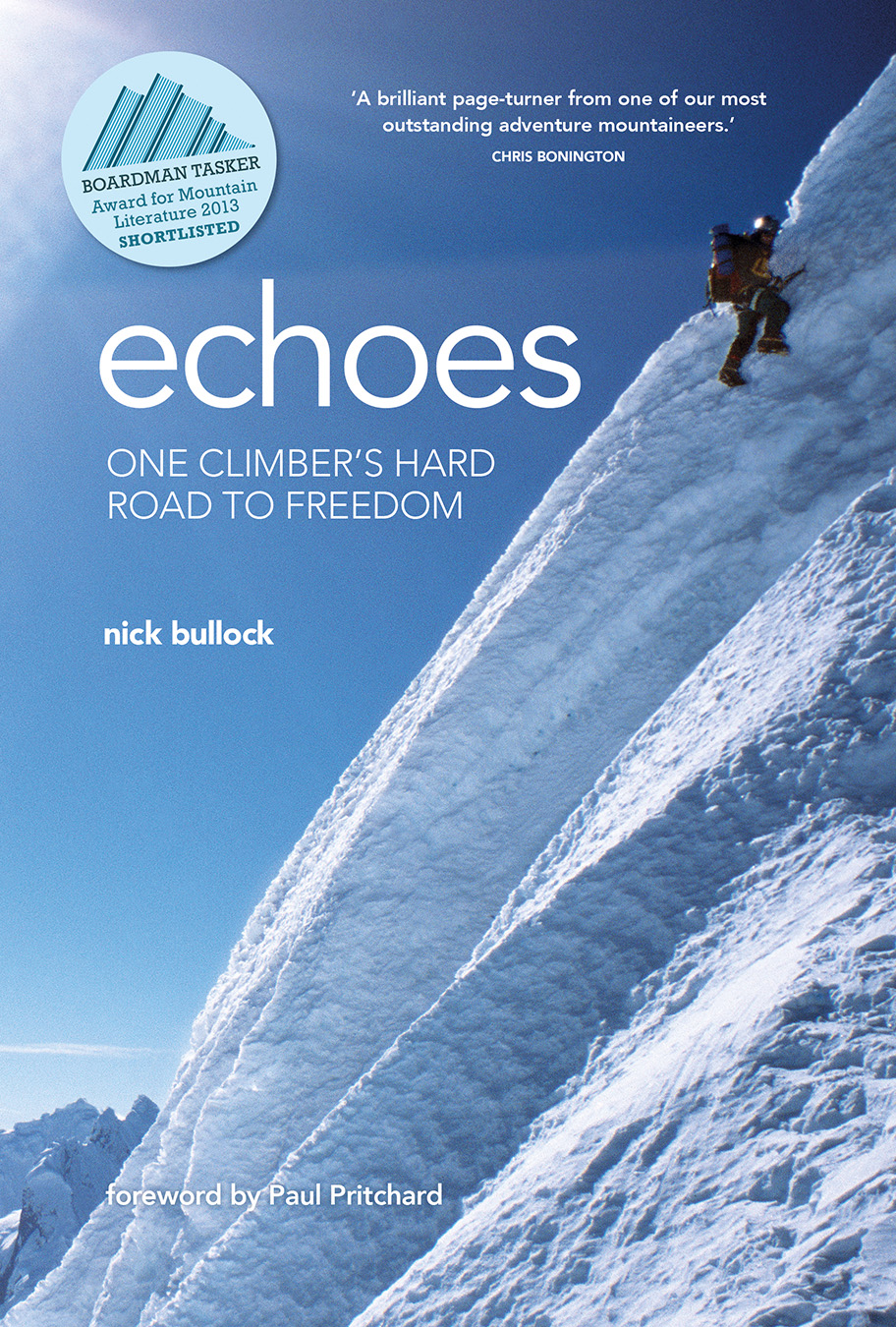 In another of our book extracts from Vertebrate Publishing, we focus on Echoes by Nick Bullock.

Nick Bullock was a prison officer working in a maximum-security jail with some of Britain’s most notorious criminals. Trapped in a world of aggression and fear, he felt frustrated and alone. Then he discovered the mountains. He soon became one of Britain’s best climbers, learning his trade in the mountains of Scotland and Wales before travelling from Pakistan to Peru in his search for new routes and a new way of seeing the world. Echoes is a powerful and compelling exploration of freedom – and what it means to live life on your own terms.

In this extract, Nick Bullock tackles The Orion Direct on Ben Nevis solo …

Since finding climbing I had already changed from a homemaker looking for comfort and stability to a migrating bird that leaves behind the known and flies to the new and challenging. People mostly like to know what’s around the corner, the next day, the next week, month or year. We hatch and look from the comfort of the nest and we see space and a big sky and adventure but before you know what’s happened you are surrounded by the familiar, back in your safe territory and scared to take flight for fear of the unknown.

Long moves from one good ledge onto a patch of névé, then onto a smear of ice, completely absorbed me. I seemed to be in a new, brighter reality. Occasionally tired from a difficult move, I found a place to relax, until I forced myself on to meet the next challenge. And at last the wall was climbed, and I moved easily to the foot of the final tower.

This looked down on me, dark and mean – and steeper than anything I’d encountered before on the face. Nestled just beneath the summit ridge, the snow and ice was less than below. The wall to the right of my position looked to be too steep. Leaning into the snow I consulted the book.

Follow left-trending snow-ice grooves to the snow slope beneath the final tower. This can either be climbed directly on steep ice or turned by following a groove and chimney line on the left to reach the plateau at the top of Northeast Buttress.

I climbed the snow slope front-pointing and stabbing the picks of both axes into the fresh skin, before stopping beneath the tower. Leaning back to study my options strained my neck. I tried to read the deep chimneys, runnels and corners for a possible exit. The face looked like a sculpted and furrowed desert plain with wind-blown snow snaking over its surface. Soft like flour, the powder clung to all it touched. The weakness I looked for was masked. The tower showed me a strong and impenetrable front. But I hoped this front was like that of some of the inmates from the prison. I hoped there was a way past it.

Yet search as I might, I couldn’t decide the best way. The usual exit was hidden and having no rope would leave me stuck should the chimney turn out to be too difficult. Often when soloing, the described route is not always the easiest. Sometimes it is better to choose a more difficult but obvious line. At least you will know what is to come and can prepare mentally. This was one of those occasions.

Above me I could see a deep chimney, blocked by an overhanging chockstone, leading to a near-vertical open-book corner. I moved up, still undecided if this was the line I should take. A faint trail of steps leading into the bowels of the dark fault and disappearing above the overhang convinced me this must be right.

The walls closed around me. Steep. Suffocating. If this was life it would be easy to give in, decide I had done enough now to justify my existence. The weight on my shoulders became heavy. Leaning over me, blocking the way, a runnel of ice dribbled from above the large boulder blocking the chimney, thin and delicate. Wedging into the cramped cave beneath the boulder, I gained a purchase on the right wall. I heaved. Back-and-footing-bridging-pressing-straining-fighting I made progress until level with the top of the boulder. Although still in the confines of the chimney, the space and emptiness beneath was sickening.

‘Come on, for Christ’s sake. Concentrate on what is ahead not what is below.’

The voice in my head was screaming at my flagging arms and legs that everything was under control. Heaving myself up from a placement in the corner above the chockstone, scratching-scraping-sweating-gasping, wedged into a tight, dark corner, I knew there was now just one direction. Retreat was impossible.

Taking a breather on top of the boulder gave me the first opportunity to look ahead. A runnel of snow leading to the open-book corner had a slither of ice, thin and shallow, running like a trickle of dirty brook water. No good. I needed a river. Tufts of moss, green islands in the brook of ice, frozen and covered in a fine white mist of frost, grew as sporadic and weak clumps, clinging to existence in this bleak nowhere.

I could see steps leading to a spike beneath the corner. The sling draped around the spike had a new-shiny screwgate karabiner hanging from it. My boat had sprung a leak.

I couldn’t believe it? The climber’s footsteps had lured me onto this icy island, and then, having the necessary equipment for escape, sailed away into a shimmering sunset. If I couldn’t climb the corner I would be marooned without a shore to shelter on.

Two, three, four moves into the corner, and I knew I was fully committed. The whole of the Orion Face dropped away beneath my insecure position. Waves of shimmering, turbulent ice ran over crest and fold, rib and corner, all the way down the face until pounding into the beach of snow hundreds of feet below. This was more than my mind could accept or wanted to acknowledge. Now the exposure and the effort of pushing myself was almost making me wretch. I knew I had made a mistake.

The walls either side of the corner were smooth with only the smallest of nicks on which to place my crampon front-points. It was like a small Cenotaph Corner, that soaring book-corner in the middle of Dinas Cromlech in the Llanberis Pass, but without the crack where the walls met. Unfortunately though, it was not vertical like Cenotaph Corner, if it had been I would have opted for the long wait for rescue, huddled at its base. As it was, its just off vertical angle tricked me into believing I could balance and rest. I longed for an opening in which to slide a pick and layback from, but there were none. The only purchase was from millimetre-thick pick placements in the tufts of frozen moss.

Inch, by slow, careful, tenuous inch, I made some progress. Time became irrelevant. Above, I aimed at small edges to stand on and thicker patches of moss in which I could gently stab my pick. Between these oases, I made insecure moves while all the time expecting my feet to shoot from the smooth wall. Reaching each small haven of safety offered some relief, a time to breathe, a time to reflect, to relieve the tension before studying the next section and working out a sequence.

I really did feel sick. A hand held my intestines and clenched. My head was in turmoil. Voices screamed. Time stood still.

My life depended on frozen moss.

Halfway, a ledge and a clump of moss deep enough for the whole blade of one axe offered security for a time. Although I needed the rest, the fear of becoming attached to my haven was too frightening, so I quickly decided to continue. The move to begin this second half was as difficult as any below, and I had made the mistake of looking down. Petrified, the whole process of psyching up and moving had to be endured again.

Trembling, I pushed the front-points of my left boot onto a sloping edge at hip height and hooked one tooth of my right tool into moss high up in the corner. Slowly, so slowly, weighting the left foot and laybacking from the right placement, straining, terrified, I lifted the right foot an inch… testing… foot and pick placements… they held. I moved up.

There was no time for contemplation now. I kept climbing in recurrent spasms of movement, like twitches of delirium. Finally the end was in reach. I pulled from the top of the corner relieved to be free, glad to be on my own. I would have scared anyone had they been nearby. With my thousand-mile stare I must have resembled myself after a fight in the Box.

A yell of release, a shout of life, a scream for the living.

Embarrassed, I turned right and began kicking a trail of footsteps to the summit of Ben Nevis.

If you want to read more, the book is available from www.v-publishing.co.uk – there’s even a 25% off sale at the moment!  Click here to buy Echoes.