When the temperatures plummet in downtown Ouray the steep-sided gorge of Uncompahgre is transformed into a winter wonderland of frozen waterfalls. Climbing folk from all corners of the globe congregate in this magical playground that supports some of the best ice-climbing in the world. Rumours of over 200 ice routes set in the charming location of an ex-mining town with an outdoor hot spring swimming pool are what tempts Mike Hutton to make the journey.

I have always been sceptical about the idea of any man-made climbing structures and given the wealth of supreme natural water ice in the San Juan area you might wonder why there was a need for an ice park – but let me explain. It was on one bitterly cold winter's day that the locals discovered a leak in the fresh water pipe that runs from the mighty aqueduct to the town below. They were blessed by the site of a colossal blue chandelier of ice that had somehow formed into a stunning looking line. It was from this day on that the potential for the first ever man-made ice-climbing Park was realised and with the kind help of the landowners and local volunteers a magnificent palace of ice was created for all to enjoy. For many it was a dream come true.  Of course, it will never match up to the experiences that can be had on the real McCoy. The reality is that it has created a vast outdoor gym for beginners to hone their skills and for the experienced to keep in shape whilst providing a massive boost to the local economy. As climbing legend Jeff Lowe put it: “The Ouray castle moat was brilliantly converted to a training ground for the swelling ranks of aspirant knights, which more and more included romantics of both sexes.”

Jeff returned from a huge trip in 1994 and decided to create an annual ice-climbing festival to raise money for the new park. He christened it 'The Festival of Fools' and quotes that each year hundreds of dragon-slayers from around the world would rendezvous in Ouray to share secrets and stories, swap lies and partners, wives, husbands and gear; to drink beer and confront their fears.

The annual Ouray Ice Festival, as it is now known, is held in early January and seems to draw in some of the best names in the world.  Jim Donini, Guy Lacelle, Airlie Anderson, Lucy Creamer and Conrad Anker just to mention a few have all paid a visit to do battle with the ice over the years. 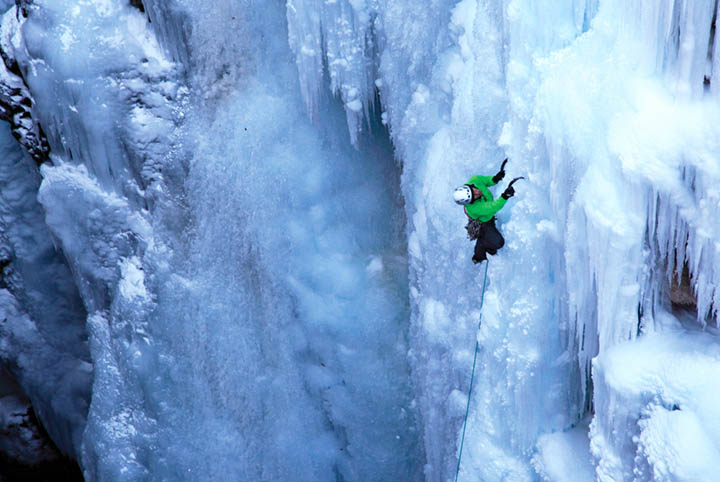 As we stumbled off the plane at Denver it was as if we had been hit by an enormous Polar vortex. In fact, that’s precisely how the world media was describing the situation over in northern USA. Rumours that even the Niagra Falls had frozen from top to bottom were circulating on most climbing social media sites. The sky had turned a evil shade of deep purple which was a sure sign snow was on its way. This was less than ideal given we had to do battle with the 3,400m summit on Highway 70 that evening.

As snow-chained lorries struggled to climb the treacherous surface we managed to glissade down to the warmer climate of Grand Junction and seek shelter in some roadside abode for the night. The storm passed in the night and we were blessed with perfect winter conditions as we made the final approach to Ouray. I had heard rumours of Highway 550 being one of the most deadly roads in the States during the winter months and wasn’t overly keen to experience it in our shitty afterthought of a hire car. The Million Dollar Highway, as it is often referred to, connects Ouray to the neighbouring mining towns of Silverton and Durango and according to the locals has claimed the lives of dozens of snow ploughs. The sign reads 'Telluride City of Gold – 12 miles 2 hours  you don’t have to be crazy to drive this road but it helps'. The road is also home to the legendary Bridal Veil Falls, first climbed in 1974 by Jeff Lowe and possibly one of the best pieces of ice in Colorado. It's also one of the few occasions where driving to the ice route is a more dangerous proposition than the route itself, although the route is pretty dangerous too. Thankfully, Ouray stops short of this monstrosity of a road and you can relax in the knowledge that your adrenaline will be conserved for the actual climbing.

It’s fair to say the Ice Park in Ouray is an absolute work of art. Dozens of water sprinklers tweaked to perfection have created an incredible number of routes with the same kinds of features you would encounter from any natural falls. The wonderful scene that greeted us was reminiscent of something out of a Lowry painting 'matchstick men and matchstick cats and dogs'. People of all shapes and sizes; young and old were giving it everything they had on some of the best water ice around. It’s one of those bizarre places where people of such different mindsets come so close. The tourists and their fluffy, grip-less boots peering over the edge and gasping as climbers risk life and soul as they hang from picks embedded in the most brittle mediums on earth. Whether or not this is a good thing is certainly a matter for discussion but what can’t be disputed is the prosperity that ice-climbing has brought to the people of the town.

As we lay exhausted from our efforts in the thin air and gazed up at the maze of ice that stood in front of us I could see how the Scottish Gullies lived up to their name. There was just about every kind of feature one could wish for with plenty of opportunities to practise bridging and dry tooling. Whilst there were plenty of steep sections, very often the sections were short-lived with many resting ledges to allow the burning calves to recover. This was the ultimate place to hone one's leading skills on grade WI 2 to 4. For the adventurous, Dizzy with the Vision WI 5/M7 is probably one of the best hybrid routes of its grade in the park and combines a perfect mix of steep ice and dry tooling on positive pick placements. In 1999, a line of bolts was added for the rock section and it was considered the best route for the men’s finals. 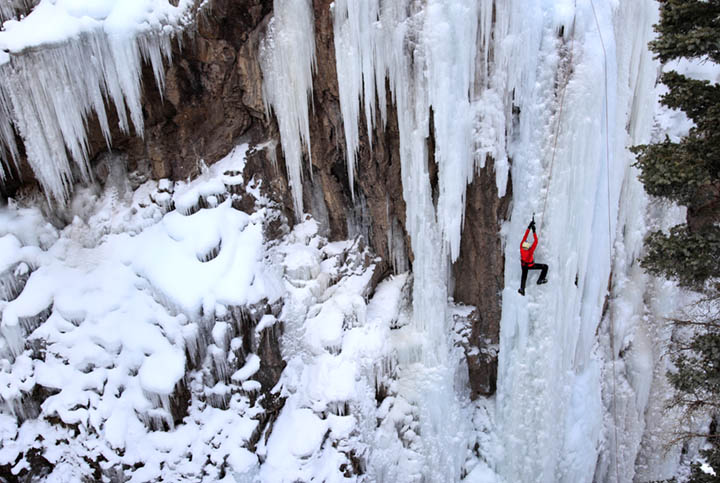 Never before have I experienced so many quality WI 4 lines in one small area.

When viewed from the security of the upper bridge the 40m lines looked sensational with huge blue curtains disappearing into the dark abyss below.

One of the most memorable moments of the trip was watching Jay Smith climb a route called Abridgement (WI 5) just beneath the upper bridge. Now Jay is just about as experienced as they come. He’s spent his years climbing in some of the most adventurous rock and ice destinations that exist in the world and has an ice tick list that would make your mind boggle. To say the route he was climbing was rather out of condition was somewhat of an understatement. Tourists gaped as he balanced his way up the thinnest of ice. Cool as a cucumber, no aggressive swings, just perfectly aimed picks. The master was at work and it was clear that smacking the hell out of this monstrosity would only have ended in tears. Picks were aimed with the precision of a world-class darts player into some rather bad-ass ice often taking several attempts before the placement could be loaded. In fact, the Americans had another term, so I discovered, and that was Backward Ass but this was reserved only for the living end of all ice. Where others would have panicked Jay just tapped away completely unfazed by the fact he had just three screws in 25m of rubbish ice and topped out unscathed.

As days merged into nights we came to realise this was a pretty special place. A place completely devoid of elitism where climbers from all backgrounds could stand to gain from the experience. Steep ice wasn’t just an aspiration any more, in fact, with all the vertical sections on the top rope-able Five Fingers sector pretty much anybody could give it a go. There is even a special clinic run by the  'Chicks With Picks' team that allows women to hone their skills over the Ice Festival week. Its run by Jen Olson and a set of very accomplished female mountaineers.

As with most climbing experiences it’s often the journey that proves to be the greatest and often the climbing just an excuse for the journey with some mighty fine individuals. Ouray exceeded my expectations in all of these areas and I hope it can do the same for you one day too.

Used in the men’s 1999 final this is definitely one of the best mid-grade mixed routes in the park with the security of some good bolts should you go flying. A great curtain of steep ice followed by a testing finale on edges and corners.

A fatter version of one of the original seepage routes that whilst never that hard just keeps coming. A fine introduction to WI 4 climbing with good screw placements.

Undisputedly the best long WI 4 in the park. Climbs the unrelenting steep prow with the minimum of rests on perfect blue ice. A great view from the Upper Bridge.

A classic 40m pillar of ice that, as the name suggests, can often be wet in early season but is still a superb sustained and character building outing all the same.

The obvious pillar of ice that emerges from a bizarre pool of orange water has a steep start but eases with height. 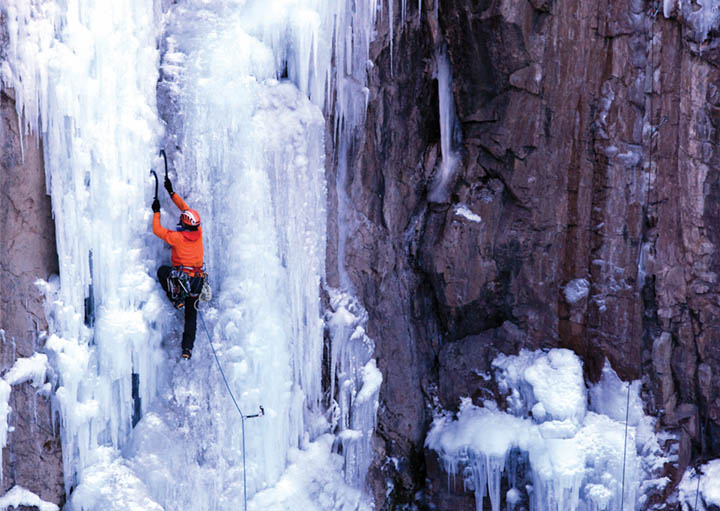 The park opens in early December and closes during the first week in April. If you can make mid-January then the Ice Climbing Festival is a unique and worthwhile experience for all ages and abilities.

Snow chains are essential and are available from most Wal-Mart supermarkets. The Highway 70 west from Denver climbs to over 3,400m and driving conditions can be treacherous.  Although the hire car companies don’t permit the use of chains, they also don’t provide snow tyres.  This contradicts the highways laws that state you must carry chains. Welcome to the rules of the USA.

Fly to Denver then hire a car and drive west on Highway 70 to Grand Junction. Head south via Montrose to Ouray on Highways 50 and 550. It’s also possible to fly to Montrose and use public transport for the whole trip if you’re just visiting the ice park.

Ouray town is the perfect base with hotels galore, many offering discounts to climbers. The Riverside Inn is affordable and has the luxury of its own outdoor hot tubs.

The Ouray Ice Park Guide by local guide Vince Anderson is the best definitive guide to the park and includes a great foreword piece by Will Gadd. Colorado Ice by the late Jack Roberts is a superb guide to all the ice-climbing in the state. 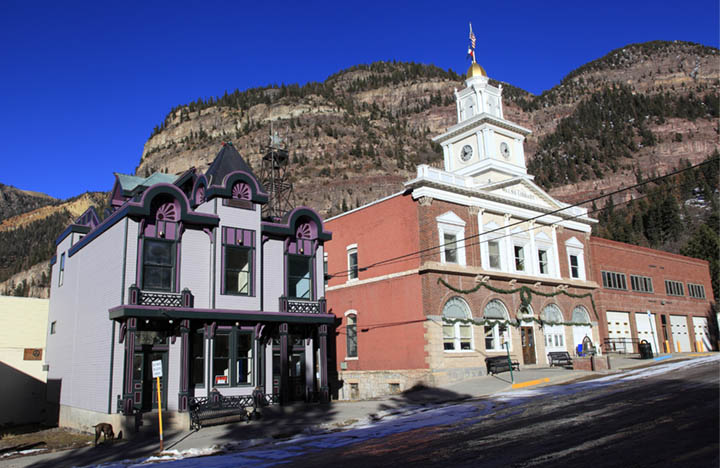 You can see more of Mike Hutton's photography at mikehuttonimages.com