One of the great Welsh classics described by Stewart Moody 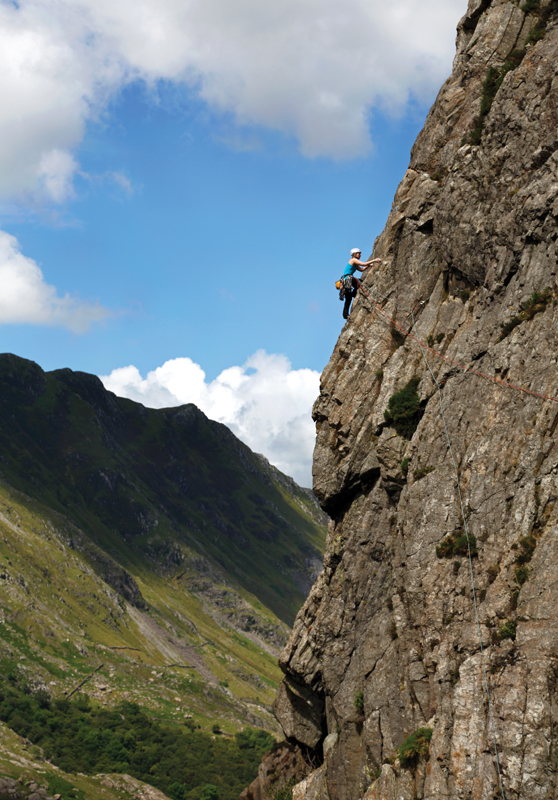 The route traces a line up the middle of the crag; its organ pipe columns of rock providing a great romp. It doesn’t have the prestigious heritage of, say, Cenotaph Corner, nor is it a Joe Brown classic but, for those taking their first steps into multi-pitch climbing, or those wanting to bag one last route after a day climbing Wastad’s E grade routes, this is a hands-down winner. I recall my first ascent, I’d just done Rib and Slab (VD) on Craig Ddu and I was keen to build a little momentum and lead my first multi-pitch Severe on a mountain crag. I wanted something friendly as, in my early days I felt intimidated by The Pass and, on paper, Crackstone Rib seemed to fit the bill. It’s a shame that the start point for the route isn’t more comfortable for all the traffic it sees. The area immediately beneath the steep and scrappy, so you should gear up at the path that traces along the base of the crag and then scramble the last few metres to the base of the route.

The view down the pass of Llanberis opens up on your left and as you look down between your feet there isn’t much there save for the A4086 snaking its way along the valley and The Climbers' Club hut far below. The position is sublime, and the exposure gives you a real kick. From there the rib leads up on a series of worn but friendly holds with plenty of gear and route finding is not an issue. After 35m of delightful climbing, the belay ledge you reach is comfortable and straightforward. Enjoy the views whilst bringing up your second; from your perch, you can see the train struggling up Snowdon and tiny climbers crawling over Dinas Mot on the opposite side of The Pass. You probably won’t have much time to faff here as there’ll be a queue of other parties ascending in your wake. It’s time to tee off on pitch 2.