As the sunniest and driest crag in Somerset, the Boulder Cove at Brean Down is guaranteed to be busy on all but the most miserable of winter weekends. The rest of the extensive, varied and equally sunny Brean cliffs will, of course, be deserted but that’s Brean for you. Located just south of Weston-super-Mare, the mile-long promontory of Brean Down juts out westwards into the Bristol Channel giving its south-facing cliffs shelter from the prevailing winds. The rock is remarkably quick-drying and mostly free of seepage too, making the crags viable even on showery days. The cliffs above the beach are home to a gregarious clutch of hugely popular sport climbs as well as a rather more esoteric collection of trad adventures. Hidden from view, at the westernmost end of the Down, the Palmerston Fort is neighbour to a set of short isolated sea cliffs well worth seeking out for a change of scene. 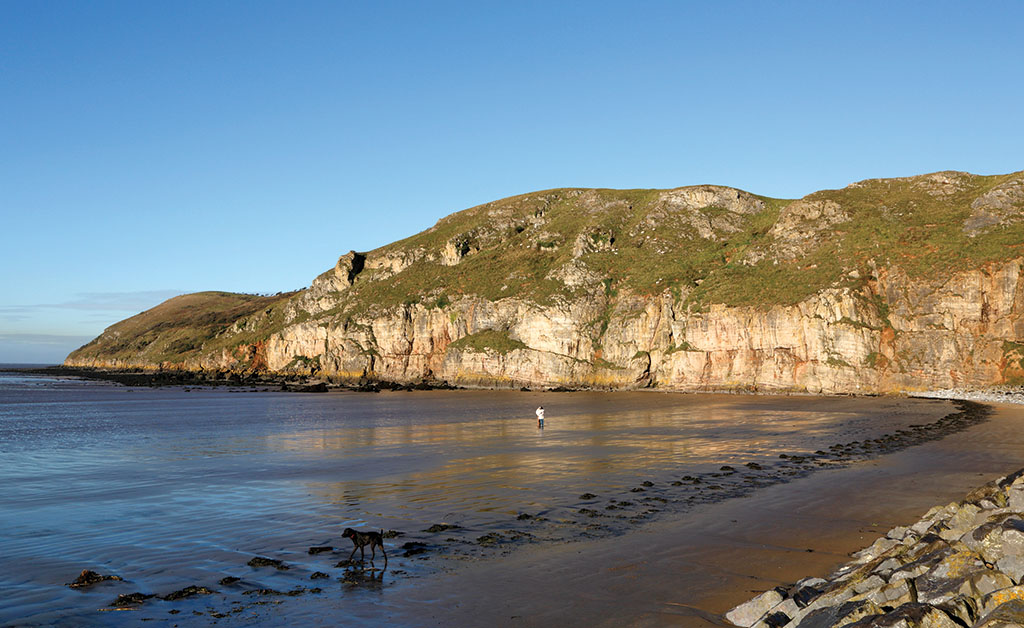 Brean is best approached from junction 22 of the M5 following the minor road northwards from Burnham-on-Sea through seemingly endless caravan parks to reach, eventually, the shop and café just ahead of the Down itself. An alternative route is possible from Weston-super-Mare but usually takes just as long.

The National Trust car park next to the café is cheaper in winter than summer and make sure you check the lock-up times! An alternative, the neighbouring car park is available at a similar charge. There are toilets next to the café. The sport crags of the Boulder Cove lie above the high tide line but are cut off from the beach for an hour or two around high tide. At these times you can escape via a steep, sandy scramble just to the west of the cove (also possible as an approach but difficult to locate) otherwise just stroll across the beach to the cliffs. Don’t be tempted to park on the beach itself. If you get your timing wrong you won’t be the first climber to have lost their vehicle to the racing tide.

In the early 60s the striking lines of Cyclops Slab and Pandora’s Box were climbed by G Mason. The 70s saw Pat Littlejohn pick off the most obvious remaining lines including the intimidating Bones Chimney and the Great Corner. But it was Martin Crocker who, along with various partners, dragged the crag into the 80s with a crop of hard trad climbs and, particularly, with the development of the Boulder Cove. The first batch of clip-ups, dating from the 80s, were climbed on a mix of threads, pegs, jammed nuts and 8mm bolts – not to everyone’s taste.

By the 90s drills and staples had arrived and the Boulder Cove gradually transformed into what it is today. Exploration of the Fort Crags also began around 1960 when John Hone climbed some of the easier lines. The crags were then more or less forgotten for 30 years until rediscovered by Crocker whose lifelong passion for adventure and exploration would inevitably find expression there. In the winter of 1995, 17 new routes were climbed on one freezing December day. Dozens more followed over the next two winters – all trad; some remain unrepeated. 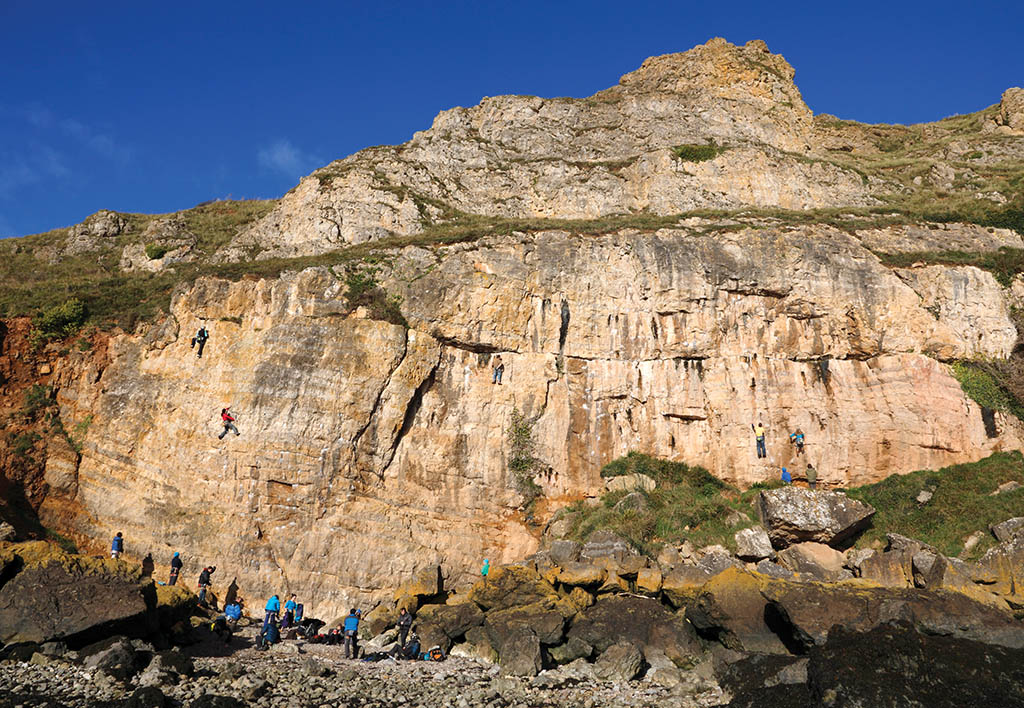 The Boulder Cove arrival point is the pebble beach below ‘The Brean Six’ – ever-popular and much used as warm-up routes by the majority of visitors. On the far left Brean Dream (F6b) is probably the easiest of the six but sports a brutal starting move. To the right, the routes get progressively harder (and better) culminating in the superb Tide Rising (F7b+), a gently overhanging wall with big moves which are gradually becoming harder as bits of holds crumble away – probably F7c by now. In between, sharing a start at the slanting crack-line in the centre of the beach are two fine, steep lines: the recently retro-bolted Chepito (F7a) is a favourite, sporting a couple of stiff pulls to reach a superb hidden finger pocket. Just to the right, the retro-bolted Pearl Harbour (F7a+) is steep and juggy to start but then surprisingly technical and delicate above. Inevitably, many link-ups, diagonals, and counter-diagonals exist – worthwhile if you have done everything else. 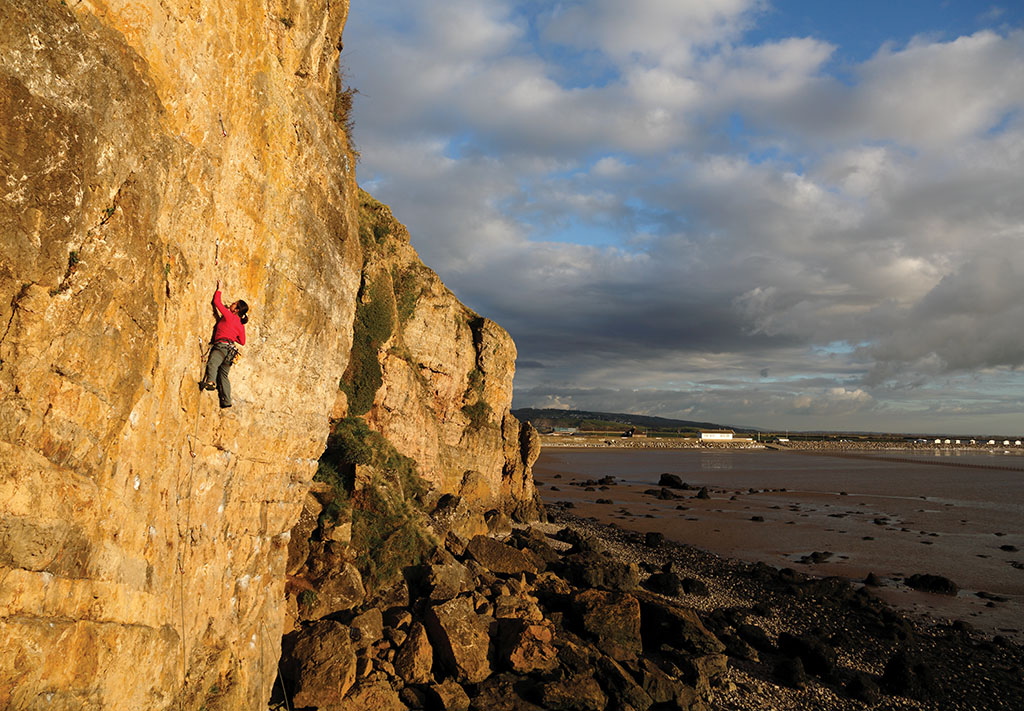 Stepping up onto the raised platform on the right means a step up in grade too. The platform provides shelter to feral goats and the evidence will be apparent. The route to do here has always been the leaning wall of Chulilla (F7b+) but after over 20 years of being everybody’s project, it’s really showing signs of wear. A more amenable alternative might be Casino Royale, also F7b+ was re-bolted after languishing for many years in a state of increasing decay. It takes the rightmost line of bolts and features tough moves on some surprising holds and rasping rough rock. 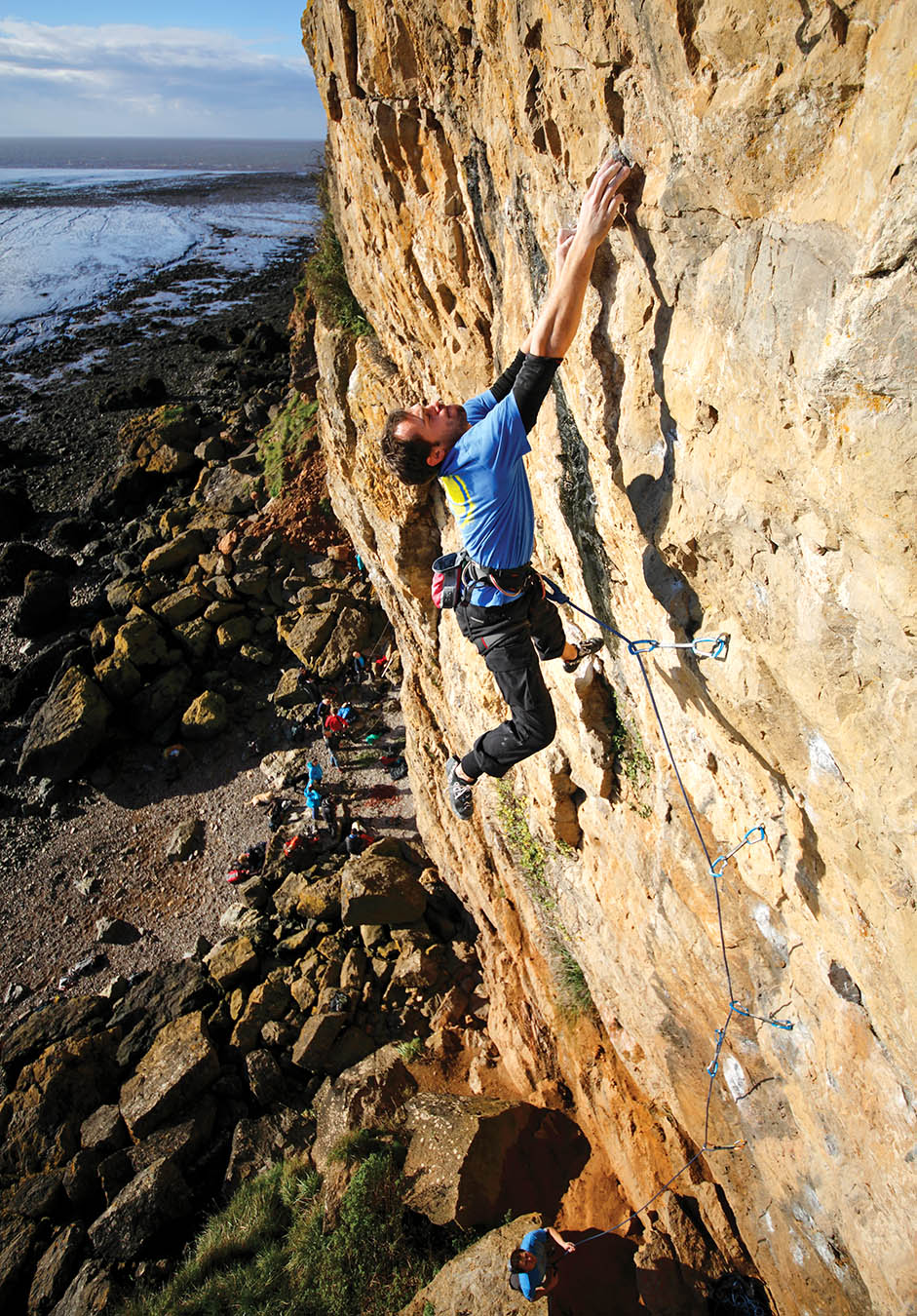 In search of something a little easier? The Root of Inequity (F7a+) just to the left sports a great little roof problem rewarded by superb finishing holds. If you prefer something even harder then try the permanently chalked-up brown sheet of rock below Chulilla; hard climbing leads to a choice of three finishes: Storm Warning (F7c+) finishes up Chulilla; just to the left Brean Topping (F8b) is the crag’s hardest line and further left is Black Snake Moan (F8a) a recent addition and one of the very few routes thereabouts to include a proper rest. As with the routes above the pebble beach, many link-ups have been climbed. Most aim to provide the ultimate pump but a notable exception at around F7a+ combines the starting groove of Chulilla with its natural continuation (which is actually the finish of Prisoner of Conscience – another tough F7b+ which comes in from the right).

One other local venue possibly deserves a mention here – I’m not saying you should rush over there but in the sweltering summer heat, or when the Boulder Cove is overflowing, it might just save the day. Axe Quarry lies on the eastern end of the Down and contains a north-facing wall, home to a half-dozen sport routes in the F6b to F7a range.

While the magnetic pulling power of the Boulder Cove proves irresistible to the burgeoning crop of graduates of Bristol’s Climbing Academy there is, in fact, a whole lot more to the Down than a tiny sport playground. The cliffs above the beach are home to several excellent trad climbs. Some eye-catching lines which have an adventurous feel, some tough but well-protected test pieces including Crocker’s spectacular Cove Arête (E6 6b), and then there’s Bones Chimney… If you’re planning a trad day at the beach you’ll need to bring along a sense of adventure/humour, all the gear you can carry, and the patience to fend off the curious holiday-makers who inevitably wander over to ask whether you have seen the film of that French woman climbing an overhang with no ropes (Catherine Destivelle in case you didn't know).

Cyclops Slab (HVS 4c) is best done in two pitches, not least because the nearest bush belays are miles back from the top of the route. The first pitch is an entertaining chimney/crack/overhang which lands you on a sandy ledge at the foot of the tapering slab. The slab itself is climbed initially by laybacking the corner crack past an old peg; above this you’ll find it easier to deviate away to the right. Don’t underestimate this pitch – it looks easy from the ground but sandy rock and mediocre gear placements give it an adventurous feel.

Great Corner (E2 5a) is a Littlejohn classic famously (inexplicably?) featured in David Jones’s book Rock Climbing in Britain it probably sees one or two ascents per year. But for the full Littlejohn fix only Bones Chimney (E4 5c) will suffice – a compelling line, steeped in South-West history but sadly beyond the selling (and climbing) abilities of the author. If you really are an aficionado of this kind of thing then you’ll know what’s involved, but here’s a tip: the chimney’s not the hard bit. The shorter clean-cut corner of Pandora’s Box (VS 4c) is relatively pleasant and well-protected and, unlike its namesake, contains no nasty surprises (unless you count the absence of any belays). Just kick steps up the slope to reach solid rock outcrops on the hillside above.

Those in search of a quieter trad venue should take the concrete staircase up onto the top of the Down and enjoy the stroll over to its western end where The Palmerston Fort stands guard against a French invasion. The Down is cared for by the National Trust and home to a herd of docile White Park cattle, several rare species of plant and, in spring, a carpet of bluebells which cover its northern slopes. The Fort Crags are very tidal so local tide timetables are a pre-requisite but, with a bit of planning, a full day on these crags is usually possible. For a couple of hours around low tide the cliffs are accessible from the slippery, seaweed-strewn boulder beach. After that fix an abseil rope or move along to the Ochre Strip – a long ledge which lies above the high tide line.

A little way before the Fort is reached look out for a concrete bunker to the left of the path. Descend from there to the cliff edge and scramble down to the boulders. The rock is quite unlike the cliffs above the sandy beach. It is hard, weathered, and free of sand with interesting features, fossils and generally plentiful runners. The feeling of isolation and the tranquillity here is a world away from the thronging beach. The first walls (Red Slab Walls) provide some good safe warm-ups such as Eavesdrop (VD) a fine traverse under the band of overhangs. There are some tougher climbs there too: Birthmark (E1 5b) and In the Soup (E1 5b) which pull through the capping band of overhangs onto the ochre headwall. Both are short-lived but In the Soup is much the friendlier of the two.

Some good slabs lie just to the right; Well-Honed (HVS 4c), Red Slab Crack (VD), Red Slab Central (HVS 4c), and Red Slab Corner (S) are all worthwhile. Don’t be put off by the description of Red Slab Central in the 2004 guide – there is at least one good wire placement just where it’s needed. A little further along is a tiny zawn known as The Broken Cleft where there are some really atmospheric climbs on fantastic featured rock. Belays, however, will need to be arranged with care. The only suitable placements are in a tiny rock outcrop several metres back from the edge. Several climbs can be started from a gigantic boulder if the sea is threatening; Honeycomb (E1 5b) is one recommended line. It looks unlikely from below but launching out from its initial crack you will be rewarded with the eponymous matrix of pockets, jugs, and thread runners. Equally fine is the groove line Apparition (VS 4b) which gives quite sustained climbing on great big holds and, possibly best of all, is Me’ Shell (E2 5c) which pulls into a fossil-infested groove in the steepest part of the crag.

Not far to the right is The Ochre Strip – a long ledge system above the high-tide line. There’s plenty to go at there and n a superb and isolated setting – go explore. To the right again, 200 metres from the Broken Cleft is a hidden gem: the rarely visited Hotaches Buttress provides a bunch of nice Extremes, all non-tidal and all equipped with stainless-steel abseil stations. Try the excellent Hotaches (E1 5b) or Creak Machine (E2 6a) a well-protected boulder problem through a small projecting roof. 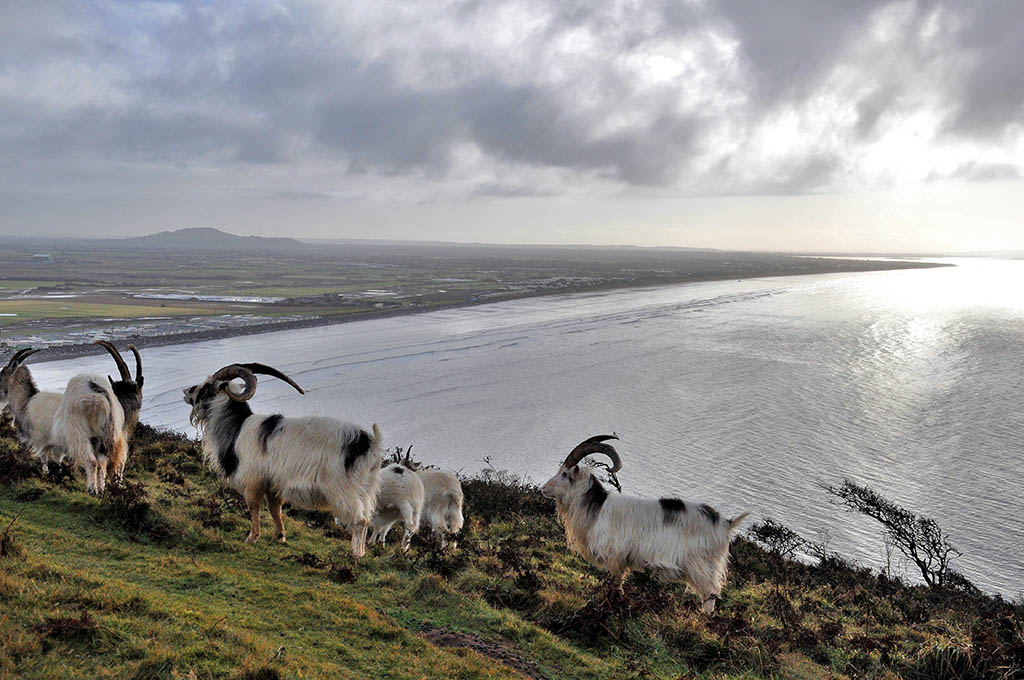