“Hi Ruth, how are you feeling?”

“The operation was a success, Mr Todd was happy with how it went…”

Is this what they always say? Or does this really mean that I might be free from pain? Obviously not at this moment, but once I’ve recovered. It had been a long road getting to this moment and none of it had been easy.

In June 2008, I woke up with the all too familiar feeling of a painful lower back. I have had problems with my back since I was a teenager, short episodes lasting a few days or a week. I’d seen all the latest recommended osteopath/physio/sports masseur for a couple of sessions, and after a week or two I’d be back to fighting fit and not worrying too much. This latest episode was terrible timing as I was midway through the hut-to-hut expedition part of my IML assessment. Luckily I managed to keep going and my fellow candidates and assessors were all very lovely and helped carry some of my kit. I arrived back in the UK rather fed up and sore but assuming that it would sort itself out in a few days as usual. By October 2010, I could honestly say I hadn’t had a single day without back pain. Not crippling pain most of the time but a constant nagging pain which grinds you down and does it’s best to make you miserable, bad-tempered and unimpressed with the world.

Several months of battling with the health service back in Wales, whilst also paying a fortune to various other people, got me to the point where I was told that the only thing that they could possibly do was an MRI scan but as it probably wouldn’t show anything they wouldn’t be doing it. I was discharged and sent away without any change to the level of pain and difficulties I had been suffering for just over a year. I was completely gobsmacked, so stunned I just left the appointment and went home wondering if I was being pathetic, if it was psychological, was I making it up? When I related this news to my mum she was not impressed – I could see her drawing herself up to her full height of 5ft 6ins: “Right!” she said and everyone knows what mums mean with that phrase: “That’s enough, you are going to see Mr Todd, and we are paying.” Mr Todd had operated on my stepdad’s back a few years earlier and has a very good reputation. Within days I had an appointment booked and after a brief examination and a few questions, Mr Todd agreed that an MRI scan was the only way to find out exactly what was going on and he was prepared to give me one as an NHS patient.

MRI scan completed I headed back to get the results. A spinal stenosis, which basically means the channel where the spinal cord sits is restricted and hence the cord is getting squished. It was amazing looking at the images and to be able to see what was going on inside my back and even better to be able to see that is was no wonder I was getting constant pain. 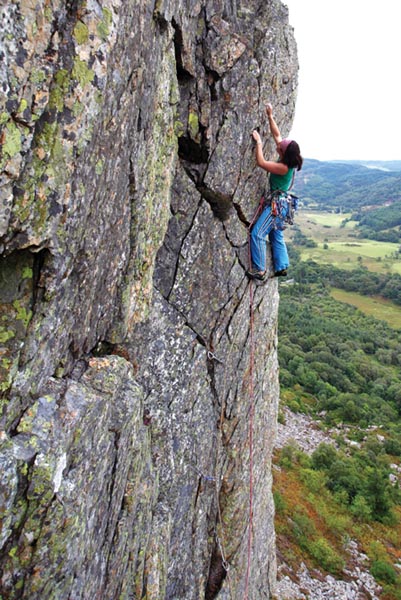 So, diagnosis made, what next? First up I was sent to see someone to stick massive needles in me – oh dear! Disappointingly, it was no use anyway so, back to the drawing board. The next option was surgery. I don’t know about you, but the thought of someone delving around in my spine to try and make a bit more room doesn’t sound like an easy operation but Mr Todd assured me that it was indeed “Very simple” and he hoped it would make a considerable difference. My stenosis was relatively mild, and although I was in constant pain I had been trying to continue to climb and to do both my job as a mountaineering instructor and trying to enjoy some climbing and cycling for myself. The letter soon came, the date was set for September 27th 2010 – D-day.

Two days after the operation I was sent home, where I spent most of the time laying down flat with very short spells of walking about the room. After a couple of days I ventured out of the house and hobbled around very, very slowly, being overtaken by old ladies with zimmer frames. After 10 days I had my stitches out and then at three weeks I went back to the hospital for a check-up and some advice. I’m not sure I got the normal pep-talk. Most people have this procedure when they are much older than my 33 years and aren’t very fit, not being climbers/cyclists/outdoor instructors. Whilst it’s good being fit before surgery, it does make you a very impatient patient. My questions about how long it was going to take before I could cycle/climb/carry rucksacks... were answered along these lines: “What you have to realise is that we have just cut you open, scraped all the muscles off your spine, cut out some bone and ligament and then inserted a Wallis ligament. (A Wallis ligament is like a piece of Lego with two pieces of elastic which strap onto the vertebrae above and below.) So how long do you think that’s going to take to get better?”

I was told I could walk as much as I liked but I wasn’t to carry anything or even pick up anything remotely heavy. Sitting was out for any length of time, I had to build it up slowly. Climbing? Three months was the minimum time before I was allowed to wear a harness, the scar is exactly where your harness sits.

Ho hum – not exactly what I was hoping for but I did manage to start swimming after about six weeks (no breaststroke) and sitting on a turbo trainer without having my hands on the handlebars became a fairly regular activity. Three months passed and climbing became an option again, I discovered I’d done something strange to my shoulder which was much more of a problem than the back. Perhaps it was my body stopping me from doing too much too soon? The rest of the year all I managed was a few easy routes mostly for work – I’m not very good at climbing super easy for myself, I just get too frustrated. Luckily the bike was my saviour and I spent most of the summer of 2011 pedalling around and enjoying getting fit.

Climbing began again in earnest at the end of the autumn. As you can imagine the two years before I had the operation was somewhat curtailed by the level of pain and discomfort I had been suffering. Going to the climbing wall over the winter had been a recipe to make myself sore so I had only been on the days when I was feeling relatively good – not very often. Bouldering (indoors or out) was off the menu, any impact was super painful. So my general level of power and strength was pretty low. I was amazed and pleased to discover that technique and cunning go a long way, especially in a wall where the routes aren’t 40m long and don’t require either carrying or placing a huge rack.

Nine months back into climbing I’ve overcome a number of hurdles, I’ve fallen off leading, been bouldering inside and out and fallen off loads and given myself a sore finger, been away on a climbing trip to Majorca and, as I write this, just back from a weekend in Pembroke (that’s without mentioning the bike racing). But most importantly I’m psyched. A little apprehensive I’ll admit, but compared to the last few years it’s like a whole new world.

So, am I now completely pain free? Realistically, I never expected to be and I do get sore some of the time, and there are the odd few days when it’s pretty painful and I need to be careful, but I don’t have continual pain all day every day so that’s a massive improvement. I can now run around and jump up and down without cringing. Unsurprisingly I don’t want to have to repeat the whole process in the future so I’m keeping the potentially damaging things like heavy rucksack carrying down to a minimum. Luckily I usually manage to persuade my climbing partners to go a little bit easy on me when it comes to splitting the gear. Thanks everyone for carrying stuff and being patient with me the last few years – sorry if I’ve been a bit grumpy.