A sharp needle of rock stabbed my finger as I attempted to traverse the downward sloping break.

Left hand now on the better part of the break. One more move and there’s a better handhold. If I can just keep my right big toe on the outside of that tiny crease..

Then, drop… onto the good hold.

Forearms screaming, right index finger bleeding, but only another couple of moves to go.

However, this is the crux. I always struggle on this bit.

Footholds are glassy and frictionless and I’ve only made the big move up to the pocket once.

Because I’m not there. I’m not at Newbiggin in Yorkshire on the Whiteout Boulder, trying the Font 7a+ traverse. I’m not soaking up the Easter sun surrounded by limestone and grassy landings and sheep gambolling in the distance, my kids laughing, the warm breeze on my skin. 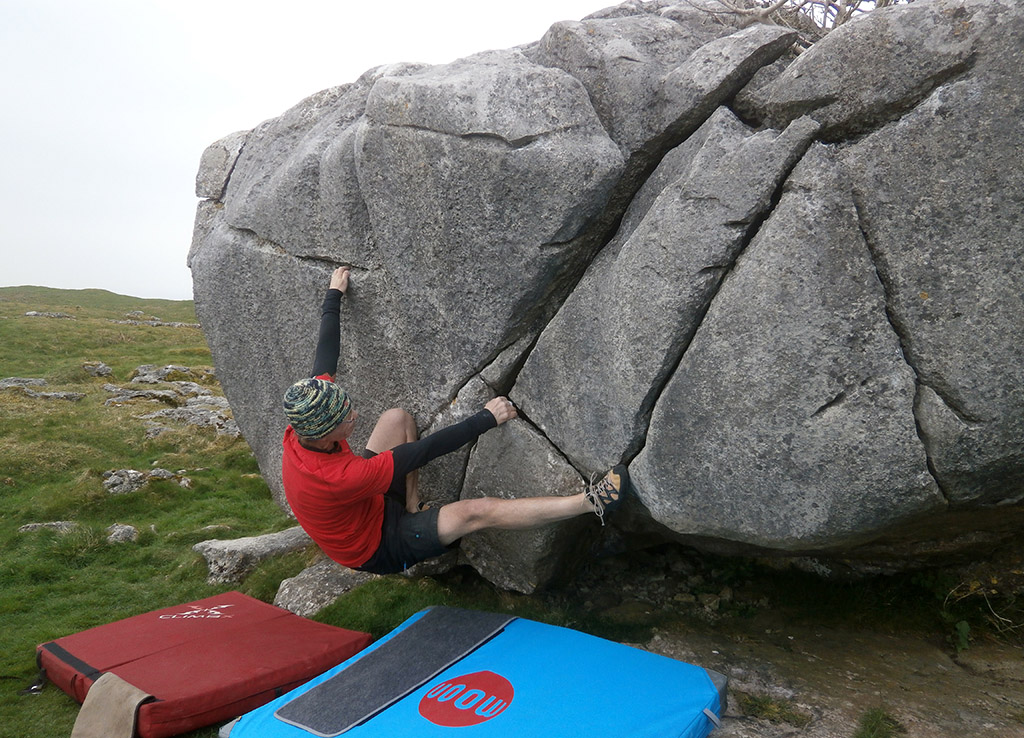 I’m in my garage, sat on the edge of a bouldering mat, daydreaming! Trying my best to not think of where I could be or what I could be doing. But the more I try not to, the more my brain jumps to fill the quiet spaces, with glorious pictures of bouldering outside with my family.

We should be away, a week in Yorkshire, my daughter working on her footwork, my wife trying that now downgraded Font 7a+ sit start, my son leaping for holds and weightlessly floating up the rock, defying gravity. Me, trying hard to maintain my strengths and not pulling too hard on those dodgy pockets! I feel cheated, frustrated, angry even. Then, anxious, claustrophobic, scared.

But try to be positive, try to enjoy, not just endure. Feel lucky that we’re healthy!

Trying to stay strong. Fingers, arms, mind. But keep wondering, mind wandering, how long, how long until we’re back on the rock, floating the river of excitement, the rush of energy, the embrace of the wind. Holds welcoming us back, greeting my fingers.

I now realise, five weeks later, that I was grieving. Grieving for my lost freedom, my self-centred objectives, my happiness, even. Further along in the process I can appreciate what we have rather than what we don’t have and can focus more on each day, rather than second-guessing what the next few months have in store.

We’re very lucky, we have a bouldering wall in our garage and it’s become the focus of our week. Setting problems, sit starts, tiny crimpy routes, big moves to pinches and slopers, hanging off pockets. It has kept me focused, kept me strong and stopped my mind from packing its bags and drifting away. A real mix of problems; some are comfortable for warming up on and stretching out, a few tricky, position led, problems to test the footwork and technique, some burly endurance routes that traverse from left to right and then back again and a couple of incredibly hard crimp-fests that really attack the fingers and forearms.

One such problem is equally hard irrespective of whether it’s started right to left, or left to right. A heinous sit start up to a sloping crimp,  then wavering across to a hold on the arête that tries not to help you around the corner; huge focus on where the feet go for the next move. As the holds are so small and it’s effectively traversing, I need to get a wide base and get underneath the holds. A good crimp (hooray) on a volume for the right hand, drop the left hand, optimistically, on to another volume crimp and then up to a microscopic, sloping crimp, the type that casts no shadow. This next move is the first crux, holding the micro-crimp with the left hand and flailing the right hand to a good positive, but small hold. Left hand up to a thumb catch on a bigger volume and hopefully but grimly, holding that as the right hand goes round the next arête to despairingly low percentage grope for an awful small sloping hold. Somehow, match on this and pull across to the finishing hold, amidst whoops of joy and Sharma like exhortations! At the end of this, my arms look and feel much more akin to those of Neil Gresham, although they probably take longer to recover! 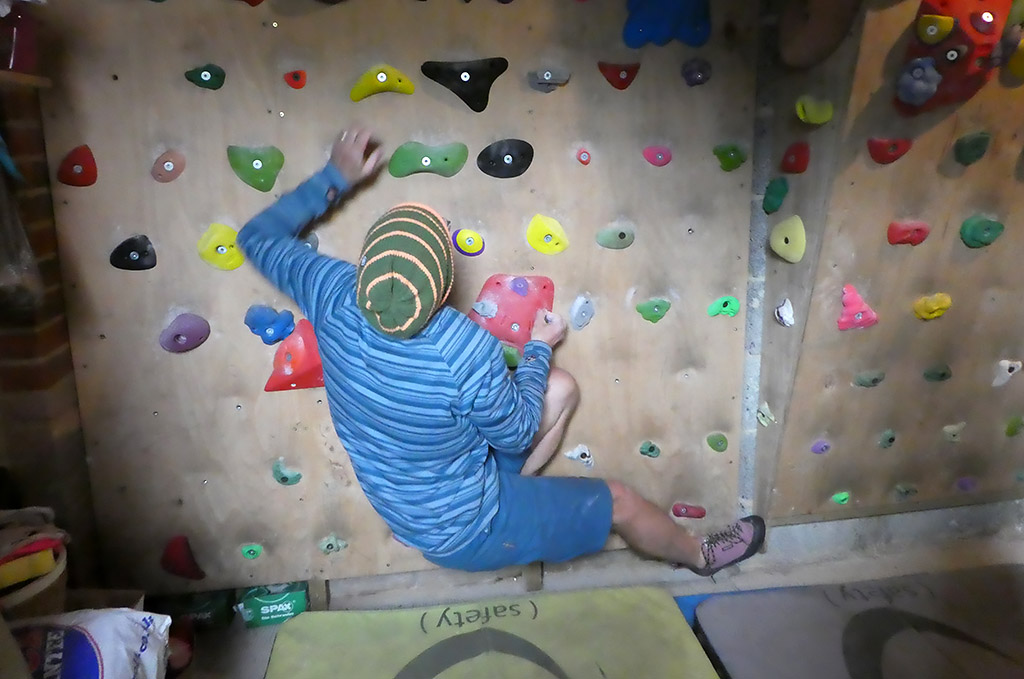 I’ve also turned to my heroes for inspiration, some likely and some less so, but all helping my head and body to stay on the same page, or the same hold.

I watched a great interview with Ben Moon, one of my heroes since I was younger, listened to Niall Grimes, hilarious,  and then the whole family sat enthralled and inspired by the brilliant Emma Twyford film of her climbing The Big Bang. I wondered how these climbers, so used to pushing themselves and raising the bar, were coping in this near dystopian nightmare.

Emma Twyford herself told me ‘In terms of climbing I think I’m a little frustrated, but I’ve also been enjoying the downtime to relax and do other stuff. But for work, it isn’t so great as my work revolves around climbing. Physically I’ve been training my weaknesses; core and power, but I’ve been resting my fingers. It’s challenging to stay completely climbing fit currently, but I’m accepting that it’s ok to just have some partial time off. My normal way of staying fit is to route set and then train a little bit'.

I also asked another of my inspirations, Johnny Dawes, how he’s coping. He informed me, ‘the lockdown has encouraged anxiety, confusion, focus, exercise’. He also told me that he’d lost weight and got stronger through exercise and ‘doing things in the way I enjoy them’.

It has definitely been a time to reflect and try and focus on as Steve McClure would say, ‘strengthening weaknesses and maintaining strengths’.

For all those pro climbers or people whose life and work is all about climbing, this situation must be so hard. Emma Twyford alluded to it and one only has to cast a net through Instagram or Facebook to see the frustrations first hand. Friends are posting challenges, climbing films, pictures or advice left, right and centre, trying desperately to cling to some positivity, a light at the end of a very long tunnel. In my darkest moments, that tunnel seemed endless. I couldn’t help thinking, in those evenings when everyone else had gone to bed, dramatically, but shockingly, ‘will I ever climb outside again?’

Self-pity, self-absorption, pessimism, or just a way of trying to get it to make sense in my own head. Time passes though and with each day, my daydreams seem less far-fetched. Apart from the traverse on the Whiteout Boulder in Newbiggin, I had my sights set on Mermaid, a Font 7a boulder problem at Burbage Bridge. It’s always wet. Every time I’ve been there, it’s wet. I wondered if this year I might have had the chance to try it. I visited the Peak in January with my family. We cruised around Burbage Valley boulders but didn’t visit Burbage Bridge.

Was that my chance gone?

Have I taken all of this for granted?

Or……..It would probably have been wet anyway.

Hmmm, reality struck. This isn’t going to last forever and it’s not just me. Time to get some focus, time to accept the situation, time to enjoy the days we have, not put everything on hold and wait in piteous hope for the next elusive boulder trip! Since that moment, new routes have gone up on the garage boulder wall, some trying to replicate moves I might find on some of my projected boulder problems outside. My family and I have also worked out a fairly intense exercise routine to give focus to each day.

I can feel my mind balancing, my thoughts more peaceful, my outlook more creative. My son and I have a list of problems we really want to try in the brave, new world. Egg Arête would be one of them. A holdless, often frictionless sloper-filled exercise in gritstone magic, in Cratcliffe. I have much experience of falling off this particular problem. Several bouldering routes in Caley and Almscliff also come to mind.

I know we’ll get there. I can almost smell the grass, feel the breeze, feel the roughness of the rock. What is missing though? I can exercise, I am healthy, we have food, water, we are safe, we’ve had a few weeks of almost uninterrupted sun. So what’s not right?

Ken Wilson said that climbing is about ‘having an adventure’. I can visualise it, I can remember it, look at the photos. But the feelings of expectation, excitement, challenge, companionship, fun, laughter, nervousness… those feelings are missing and I crave them. I’m not a great climber, but it makes my life whole. It completes who I am. Maslow would have seen it as part of my self-esteem or self-actualisation, but I see it as almost a physiological need, along with food and water. It’s what changes our existing into really living!

When this cursed virus retreats and we emerge bleary-eyed from this seemingly endless night, we’ll all have our desires, our needs, our aims and objectives. But what I’ll be after is the adventure and something else! Johnny Dawes has said a while back, that climbing is ‘a form of self-expression, dangerous but necessary’ but that ‘having fun is the most powerful performance component.’ Emma Twyford also stressed her desire for having ‘fun when we can get out with friends and make the most of the climbing we are allowed to do.’ 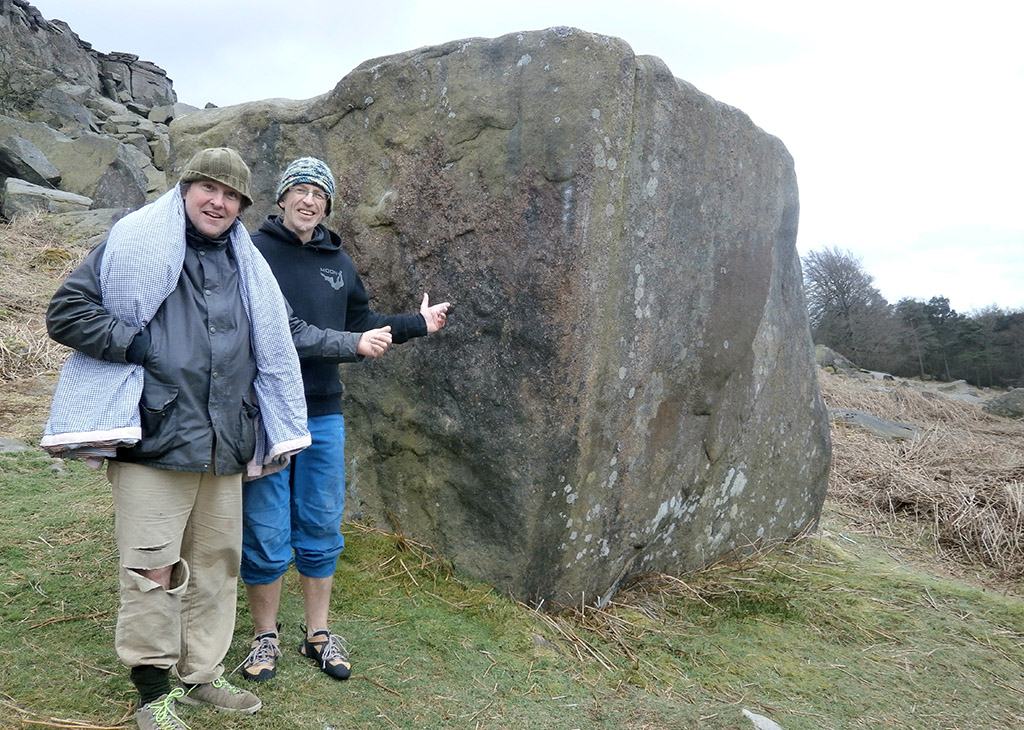 Fun and adventure. Two wonderful objectives, desires, necessities. In climbing or bouldering, those two things intertwine indefinably to create something that seems so much more than it actually is. I remember saying to a friend, almost apologetically, ‘of course, climbing isn’t the be-all and end-all, is it?’ We looked at each other and laughed, at once realising the madness of what I’d said. Of course, we both thought that it was! There are other sports I love, but they don’t envelope you like climbing does. It becomes part of you and you become part of it, in return.

So, Newbiggin, Portland, particularly The Cuttings, Caley, Almscliff and perhaps a first visit to Ramshaw Rocks and to Fairy Steps. These are places I really want to experience anew. Johnny Dawes, master of friction climbing, who endlessly inspires both my son and myself, suggested that he would be trying to ‘repeat Territoire Comanche, at F8c+ considered the hardest pure friction in the world.’

I bet he could get me up Egg Arête.

So the Lockdown Blues. It’s a very moody and angsty tune. It started with a long meandering verse, quite melancholy, very internalised, not much of a melody. The pre-chorus came in with a major chord, a sense of uplift and hope, before erupting into a joyous and fun-filled chorus, replete with harmonies and a memorable riff. This has been playing out for a while, no fade out. The soundtrack to my daydreams, becoming more real every day! That traverse, I’ve got the moves, visualised the handholds, rehearsed the lunge to the pocket. I just need to pull over the lip and get my foot on that nice chip and top out! … Newbiggin, I’ll see you soon.

Mark is Climbing Ambassador for Brookes Climb in Oxford and would like to say a huge thanks to Emma Twyford for her patient and ever cheerful responses to my questions; to the always inspirational Johnny Dawes for his ‘mentorship’, to Steve McClure for his lockdown training tips and to Niall Grimes for his comedic skills and brilliant DJing.