Around the Bloc: Wrights Rock, Churnet

Andi Turner takes us on a journey around the popular main area of Wright's Rock in this beautiful area of Staffordshire and the first-rate bouldering, but also makes the case for exploration and seeking out the excellent potential of the surrounding walls in the near vicinity.

A mulchy walk beneath pine, birch, beech and oak and uphill, through old pastures and new gates lurks the leaning bastion of Wright’s Rock. Its terracotta tones and pock-marked skin encourage you to feel its surface and test its holds. It’s a crag which rewards the technician as well as the brutishly strong, so be careful if you think you can take your wall-rat mates there for a session and expect to burn them off. 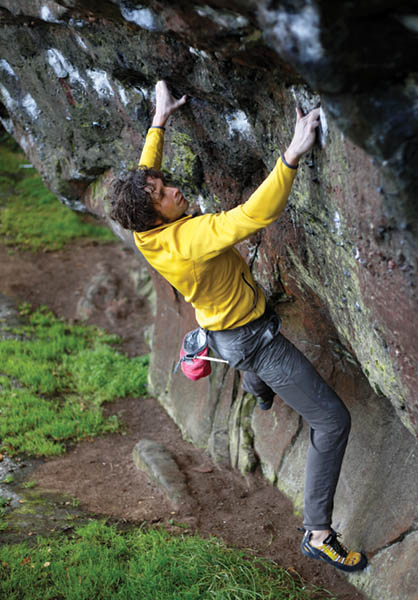 If you can campus, heel hook and withstand the pain of the pockets you should be in for a very good day. Needless to say, it’s not all about brute strength and once you step away from the hot pots of Simple Simon, Fingers in Every Pie (if you’ve ever wondered, the pastry theme comes from the Stoke-on-Trent based ‘Wright’s Pies’ which are a bit of a local delicacy and synonymous with wholesome lunchtime stodge) and Point Break there are numerous little testers to keep you occupied for some considerable time. Before we start, I'd like to say that whilst this article highlights some of the well-documented problems at Wright's there's much more to do. One thing I'd like to encourage is to get everyone to open their eyes and visit the area, not just for the same old problems because for every established problem there are five more un-named ones hidden around the corner. And THAT'S the real appeal of the Churnet.

Other than the attractive problems found at Wright’s, it has gained its reputation through its weatherproof nature. Much like Parisella’s Cave and the Bowderstone, the problems aren’t to everyone’s liking, but for some, it doesn’t even need to be raining to warrant a visit. For primo peachy conditions visit when a northwesterly blows the crag deeply dry and stable air pressure keeps any moisture locked inside its pores. However, for a more pleasant day, any dry summer evening when the setting sun finally glances its rays off the rock and a gentle breeze keep the insects at bay makes for a crag which is thoroughly enjoyable. As a general rule the crag remains in the shade. The crag will stay dry in the rain, but beware obscure conditions when certain trends in the air pressure and humidity conspire to make the crag weep in condensation. Sometimes the rock matrix is dry but the pebbles are wet, this is very frustrating.

Perhaps the main reason for most visits, or at least it used to be, is the long Wright’s Traverse (Font 7b). This beautiful line of pockets will work your stomach abs much as your fingers and you can expect to be thoroughly pumped by the end, finishing up Last Wright’s (Font 6a) not only gives you bragging rights over your pal who stepped off at the end, but also leads you into a cul-de-sac making it absurd to then go for aller-retour, right? Linking the low traverse line of Wrong’s Traverse (Font 7b) into a reverse of Wright’s has been mooted at route F8a. So, there’s your fitness training sorted for the winter, and who said we needed climbing walls. If the numbers are all a little much and there are puddles beneath the cruxes there is an alternative; flanking the central buttress on both sides are two traverses well worthy of attention. To the left is the finger knackering Niche Traverse (Font 6b+) footholds are good but don’t expect the same treatment for your hands. The crux revolves around a half crimp half pad mono and the rest of the holds all have names specific to their awkwardness too, but you can make those up yourself, a real technician’s delight. To the right of the main crag is the Hob Traverse which at Font 5 makes for the ideal warm-up if, however, it is more your main course than an aperitif, then it could well be worth just wandering up around the corner to the superb juggy buttress on the upper tier known as Tiger Wall. It’s perfectly flat landing and an amazing view across the valley make this an ideal spot to while away the hours away from the throng of the main buttress with countless eliminates and traverses possible all mainly in the friendlier end of the grading system. There's also a fair few upwards problems to go at which neatly brings me on to…

Before you burn out on the traverses it’s well worth seeing what you can achieve moving upwards. Starting from a crouch on that buttress you walked past on the way in is Out There and Back (Font 7b). This the real deal for campus crimpers, bone down on the edges and pockets and wallop your way up to the break, compose yourself and fly straight up, hard. For something a little more challenging on the mind, the cave system on the left of the Niche offers up some burly moves, the best of which is Wright’s Unconquerable (Font 7b+). This problem starts from a huge thread at the back of the cave before dangerously finger locking and laybacking your way out along the horizontal crack with a heel hook waiting at the back to snap your ankle should anything go wrong. Sounds great, eh! The Niche itself is home to a great problem called Rocket Ride (Font 6c+) which spans its way up the middle of the wall via the central bunter. Variations abound around this problem up to Font 7b+, so it means that you and a variety of different strength buddies can all play together on this section. 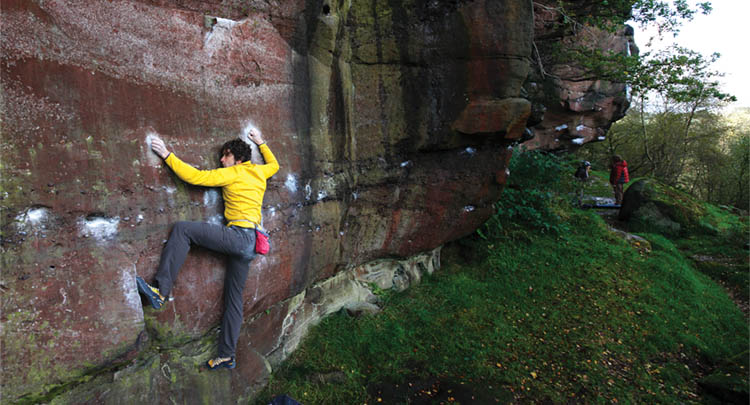 On the main buttress itself, the problems are all well-chalked and well-known. Thorns (Font 4+) gives good exercise in udging and use of thigh friction whilst the centre of the wall contains Blazes, a superb (Font 6a+) problem with a satisfying grunt of a pull to get you established and then some roof lifting to tease you out to the hidden hold on the lip. From here, things get somewhat harder. The campus line of Simple Simon (Font 7b+) has a few methods, some suiting the tall, some suiting the small. However, despite its rangey appearance, I still maintain that it’s a short man’s problem. Or maybe just a strong man’s problem, either way, it’s a great problem for hearing what the excuse book has on offer that day. The very centre of the buttress is split by an unfinished slit; this bum cleft is Finger’s in Every Pie (Font 7a) which again can be climbed purely up the crack or by venturing left on to the holds on the side wall. A smashing problem in its own right and a fitting start to the full route which goes at E6 6c, with a peg and a C3 cam, or undoubtedly as a modern-day highball for those with the pads and the cojones. As the first bouldering guide said ‘continue only if you’re a budding world champion’ out of respect for the first ascensionist, Simon Nadin. The third of the big three is Point Break (Font 7b+) which starts up the old problem of the Undercut but then makes its way through the roof. Gaining the lip is only half the problem...

So, there you have it. A superb crag, once just the home of some desperate routes and a pumpy winter workout, but now, every bit as modern as any of the well-known weatherproof venues. Development continues and whilst the main crag may seem worked out the flanks have only recently come back into trend with new problems appearing all the time. So take off the blinkers as a short walk in either direction can bring new rocks, undocumented (for now...) problems on un-named buttresses or old routes which warrant new attention of every grade going. These include the excellent Font 6b+ traverse Helter Smelter hidden in the trees below Wright's at a place called Smelting Mill Buttress below the route Iron Ore (the start of which itself provides a Font 5, from sitting) and a heap of other problems in the lower grades. It's only a short walk away and extends or starts the day beautifully. Get into those rhododendrons. 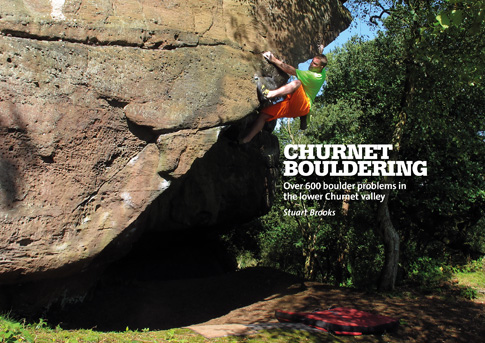 There is a dedicated guide Churnet Bouldering with over 600 boulder problems in the lower Churnet valley, plus the award-winning Peak District Bouldering guide (both published by Vertebrate Publishing) and The Roaches (BMC) both of which have an extensive range of problems in the Churnet.

The crag lies a couple of miles from Alton Towers, so if you get bored that’s always an option, but also there is an Alton Towers tab on the met office website, which is ideal for a decent local weather forecast. Bear in mind that the crag is on land of ‘uncertain ownership’ so let’s not spoil things by screaming and balling, keep it clean and use the gate for access rather than crawling over the fence. The car park is down by the Rambler’s Retreat which is a climber friendly cafe in the valley. Bear in mind to check the time that the car park is closing, night time lantern sessions might well turn into a long walk home if you’ve been locked in the car park.

Driving down to Oakamoor there are a couple of good pubs with beer gardens in which to debrief after the session is over.