Around the Bloc: The Cromlech Boulders, Llanberis

Well-loved, the internationally famous Cromlech Boulders cling to the side of the road that cuts through Llanberis Pass in the heart of the Snowdonia National Park and are among the most popular areas in North Wales.

You’ve probably nearly hit them in a car as you ­drove by if you’ve gone up the Pass or hit oncoming traffic as you take your eyes off the road looking at them. This is personification of roadside bouldering at its optimum where some of the problems can literally be started right from the car door. Whilst they have many classic problems, they really are just scratching the surface of the bouldering on offer in North Wales.

The boulders are volcanic rock and might well come from the bastion of Dinas Cromlech that looms high above them. Surrounded by classic rock climbs makes the place like a mini Kleine Scheidegg for watching climbers ascend many of the historic test pieces around Cenotaph Corner and across the road on Dinas Mot. This can help pass the time as you rest between problem attempts. Although many of the popular easier problems are polished, that does not detract from their quality. So whether you are there to spend an hour or a day the Cromlech Boulders will not disappoint and whilst I have highlighted the main classics and some of my favourites there are numerous minor problems many at around V0 or easier, making it a place for beginners or experts alike, emphasised by a mix of grades up to V13, with many good easier problems to try around V1 and V2. 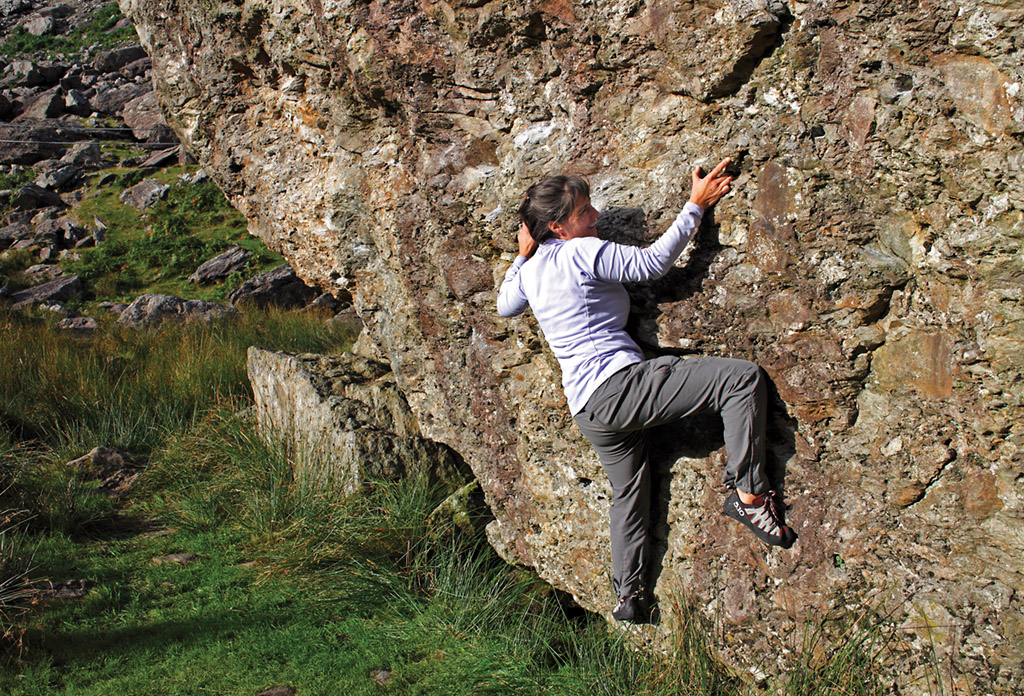 To get your bearings there is the Right-Hand Boulder, the biggest and first stop for most, and just down the road the Left-Hand Boulder is dominated by the classic Brown's Crack and beyond that the über steep Jerry's Roof bloc.

The roadside face is something of the focal point for the Cromlech Boulders and you’ll often see teams of locals there on cool summer evenings for after-work sessions. It serves like the shop front that entices the unsuspecting climber in, whether it is just for a boulder or to get that extra work-out having climbed elsewhere. You’ll be amazed how many times you were ‘just passing’. This gently leaning wall is the scene of much frustration on two of the classics Johnny’s Wall (V6) and The Edge Problem (V5). Both require fingers of steel, good technique and often a desperate lung for the top. However, most people’s first acquaintance with the area is the line of weakness across the face, The Ramp (V1) a pleasant warm-up. There are a couple of good up lines that cross the ramp, as well as a host of eliminates to be enjoyed. Just don’t wear yourself out before you move on. 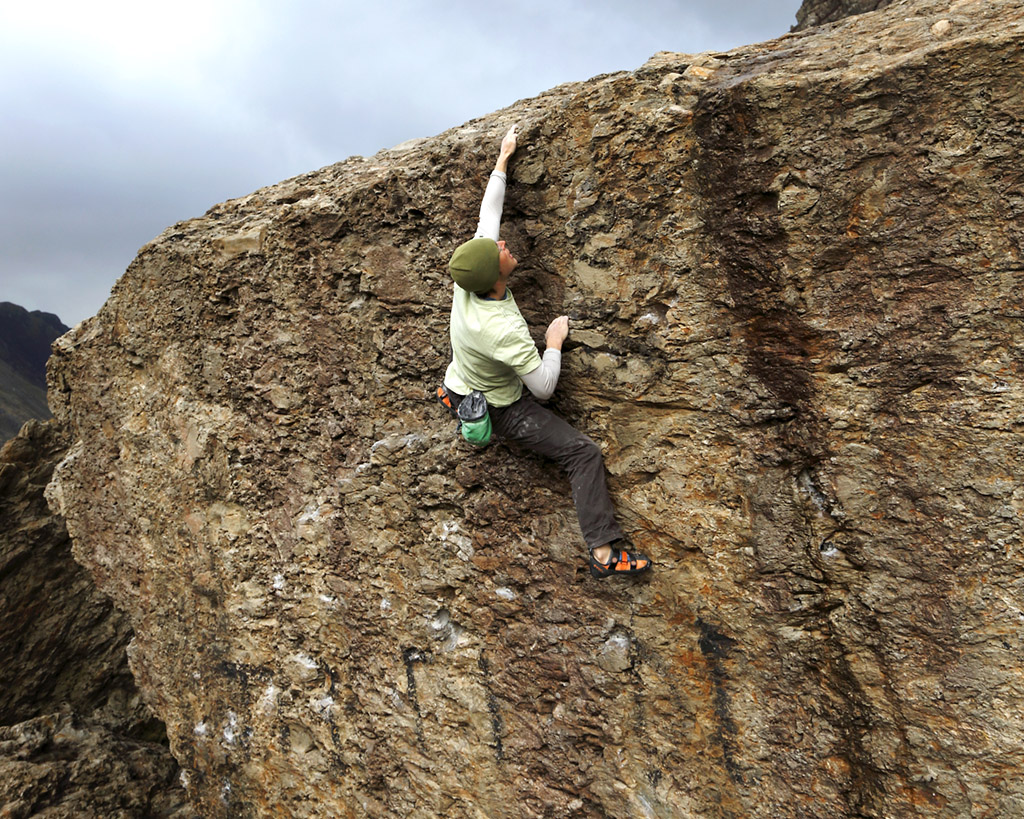 The eponymous route takes a stunning rising lip traverse and requires a certain technique, strong core and preferably a good spot near its end. The route is as burly and the crux is moving out to the big rail halfway across and then hanging on in there until the end, which can be up the slab via pockets or by carrying on left to the arête. To its left is a vertical wall, the old adage was that different finishes to the traverse equated to Left Wall, Right Wall or Lord of the Flies. Whilst not necessarily true, mentally it is a reasonable measure as the further left you go to near the prow the boggier the landing and the more confidence you need in your ability to reach the top or get wet feet. Left again is more of a swamp, don’t be put off as the Bog Traverse (V4) is a minor classic. Start off a block on the right of the roof and follow a ramp to good holds that leads up through steepness to the top. At the left-hand end of the roof away from the bog is The Blunt (V4) a baffling route that gains the thin holds above the lip and continues on to an elusive finish.

Round the back of the Roadside Face are a series of easy up problems that are a good warm-up but fairly nondescript. However, tucked away in a cave is the Cromlech Roof Crack (V6), a strenuous and sustained undertaking with a desperate exit out of the crack. It is best to have this dialled before wasting energy on the crack and is a good problem in its own right. If you attempt the roof crack the initial dilemma is whether to pretty much footless the initial section or use some form of intricate footwork, it’s a case of speed versus style. 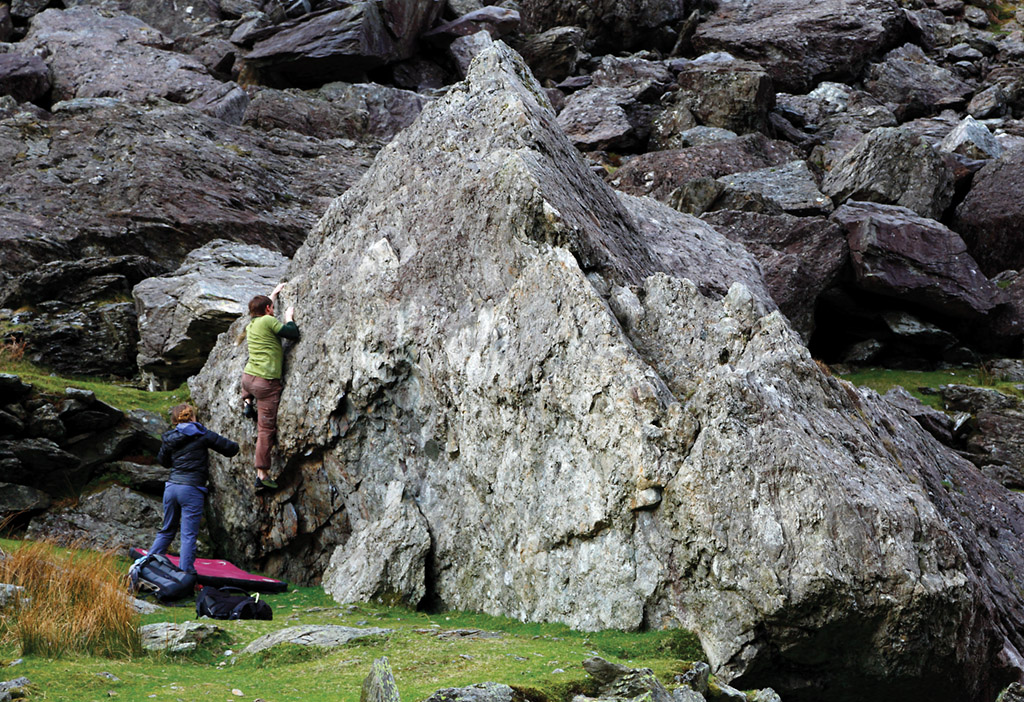 Something of a historical line attributed to the boom in climbing after the Second World War when the Cromlech Boulders became a popular playground for the likes of Joe Brown and co. Although it is doubtful that an earlier climber hadn’t stumbled across these boulders before for a quick play as bouldering in the area dates back to the turn of the century. Brown’s Crack (V1) is a steep hand, fist and laybacking crack, where the crux is finding the comfortable jams.

There are several problems to the left of Brown’s Crack, the first and easiest moves left from the start of Brown's Crack to an awkward move up the arête, this is an unnamed V4. Better still The Left-Hand Traverse (V5) gains the same arête from the left via a sharp crimp-fest rightwards to an even more perplexing move up the rib. Just in from the arête is one of the area's showpieces, Loose Canon (V5) a long and worrying dyno with what appears to be a backbreaking block behind you. A good spot, a couple of pads and the mother of all jumps gains a distant pocket with a satisfying slap if successful and a cheese-grated hand if not.

Whilst generally a disappointment there are several near solos on the back of this boulder and some have hard sit down starts. The stand-up starts are much more in keeping with the upper slab and give a good grade spread from easy to mid-grade problems. Down and left of this is one excellent problem in the modern ilk. Ultimate Retro Party (V8) has a burly and technical start to reach dinks above the lip, where it then powers its way flamboyantly right to a final pounce for a jug.

Just down the road from the main boulders is the iconic steep bloc that is home to one of the most celebrated boulders in North Wales, Jerry’s Roof (V9). This is a long power endurance test piece that becomes the obsession of many boulderers. Whilst the crux is about two thirds of the way across the roof, the moves all the way to the top are droppable as you fight the growing pump and deal with the highball finish. Several other hard problems adorn this bloc like Bus Stop (V9) that takes the right arête and Mr Fantastic that links the start of Jerry’s into Bus Stop at a mighty V12. Although going on the number of ascents it is not the hardest problem there, instead Pools of Bethesda (V12) takes that crown, even harder if you are successful in linking Malc’s Start (V13). 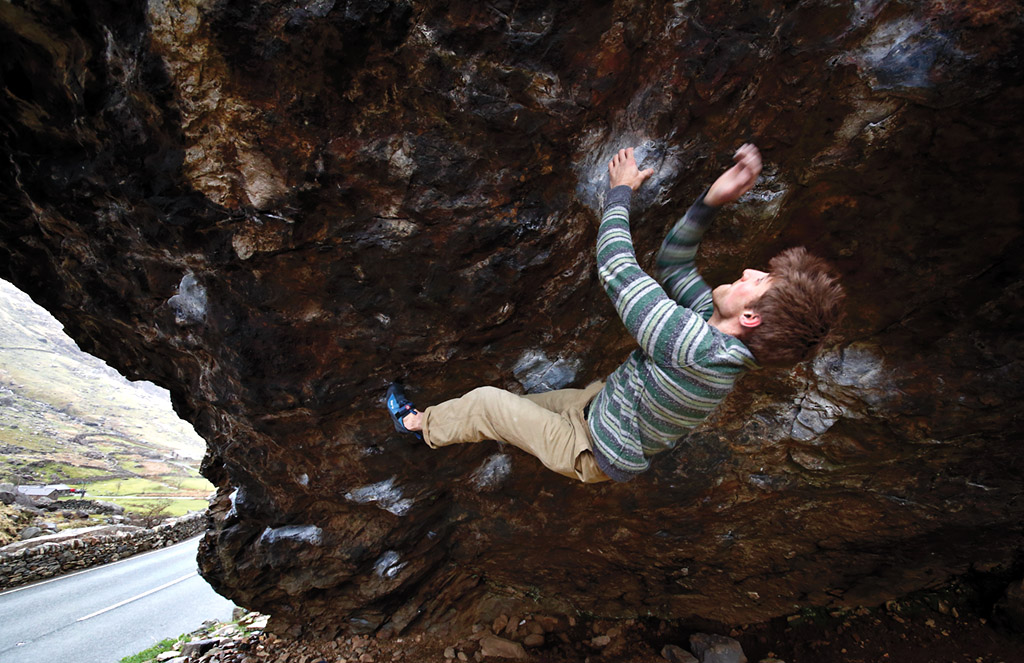 The comprehensive 2018 guidebook North Wales Bouldering (Simon Panton) features all of the problems. Niall Grimes’s Boulder Britain gives details of some of the problems. A useful website is www.northwalesbouldering.com

It’s in the heart of Snowdonia so accommodation isn’t a problem. If you are a member of The Climbers' Club, Ynys Ettws is a stone's throw away. The nearest pub is the Vaynol down the road in Nant Peris and there’s a camp site in the field just across the road from it. For everything else Llanberis is the place with Joe Brown’s and V12 Outdoor for any climbing kit needs. There’s a small supermarket, takeaway to suit your taste plus Pete’s Eats for all-day food and accommodation. The Heights is also worth a visit for a pint and good food as is the Gallt y Glyn, just beyond the edge of town, for a pizza and a pint deal.