Around the Bloc: Burbage South Boulders and Edge

Close to the city of Sheffield and on the edge of the Peak District is one of the premier gritstone crags for cutting edge routes with many of the hardest and best in a diminutive area. You will probably have heard of such cutting edge routes as Parthian Shot and Equilibrium and tucked away amongst the routes, as well as on the leftward fringes, are some equally fine boulder problems. Add into the mix some of the best lower grade bouldering on the fine stand-alone boulders in the heather scrub below the crag and we have one brilliant and varied venue. I'm talking about Burbage South at the bottom end of the Burbage Valley.

The situation is stunning with fine views across the valley to the Iron Age fort of Carl Wark and its more prominent neighbour Higgar Tor. Not only is it beautiful, but perhaps the biggest strength of Burbage South is the variety of bouldering to hand, a full mix of grades from easy all the way to impossible, quick-drying particularly on the boulders and easy access. It is a venue of two halves, you can climb there all year round with sunshine and shade available depending on the time of day and year – the edge is in shade until early afternoon making it a great place to be on a breezy summer’s day when it's too hot in the sun. Whilst down at the boulders at least some facet of the boulders will be in the sun at any time, great for the winter and cooler days but it can be too sticky in the summer. The downside of summer can be the dreaded midge but, hey, it's too warm or wet in the summer anyway?

Like I said it is a venue of two halves, in fact, I could have easily written this up as two separate features but we are generous at Climber so we give you two for the price of one.  So a good way to approach the area is to split it into two: the Edge and the Boulders. 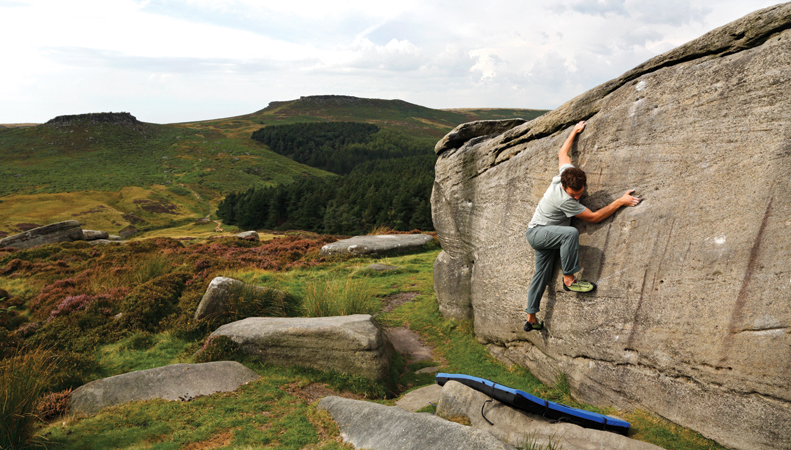 With a short, virtually flat approach the boulders are reached in minutes, making it a wonderful family venue with plenty of flat ground for a picnic too. Furthermore, they offer the main source of quality lower grade problems – over 150 plus – with the majority in the V0 to V4 and a few harder ones up to V9 thrown in for good measure. There's a lot of variation in problem style too so if you like slabs there's plenty around. The same goes for face climbing, pockets, pebbled walls, arêtes, cracks and the obligatory grit sloper. And all this with more often than not perfect landings, thus making it one of the friendliest of circuits in the Peak.

The boulders are scattered around either side of a broad track that runs the length of the valley with the majority of the boulders on the cragside slope. With many well-trodden classics, it's a daunting task to highlight the best in this micro Fontainebleau. On a first visit, the best advice I could give is to have a look around first to become acquainted with the boulders and see what catches your eye. My favourites are Huggy (stiff V1) on The Briquette, Vague Rib (V2) on The Brick, Catch ’n’ Match (V1) and the crimpy wall of The Tiger (V4) on The Tank boulder and Pock Man (V1) and Pock (V2) both on the Pock Man boulder and both requiring good footwork. For something stiffer, and very frustrating if you don't nail the sequence early, is The Sheep at a tough V5 on the boulder of the same name. And finally on The Rabbit boulder beneath the track is Rabbit Wall (V2) another little gem of which there are many more to explore.

As I mentioned in the intro the edge has many fine hard testpieces in addition to a reputation for toughness. It is in total contrast of the gentle laidback fare below, this towering crag is somewhat brooding in nature and in the dark shade of morning has an air of invincibility and foreboding in equal measure. Yet the scene changes as soon as the light casts off the dark from mid-afternoon and spreads its magic across the crag. The warm fiery glow of a sunny evening is truly a delight and is good for the soul, making climbing there a memorable experience.

Whilst the Boulders are easy to explore the problems stretching along the full length of the edge take a little bit more work in terms of locating them but stick with it and you will uncover a veritable cornucopia of delights. These are often in clusters to form mini-circuits. Some of the landings can also be gnarly and it's always worth going with more than one pad and a portable spotter/pad carrier to make life more comfortable. The far left-hand end of the crag is especially good for the boulderer and has gained the name of Burbage Earl given its likeness to its Yorkshire counterpart with strong lines in abundance through little arêtes and walls at a perfect height.

I've purposely gone for the mid to higher grades here and pooled a few opinions of what the stand out problems are? It was difficult to come up with a consensus given the wide range of views but the recommended problems in no particular order begin with: Above and Beyond the Kinaesthetic Barrier is a popular highball but not one for the faint-hearted given the height and landing but you get V6 if you are successful or E4 6b if you're not, also, the powerful and sequency lightning bolt feature of Electrical Storm (V7) goes from a sitter and up the ramp rightwards. 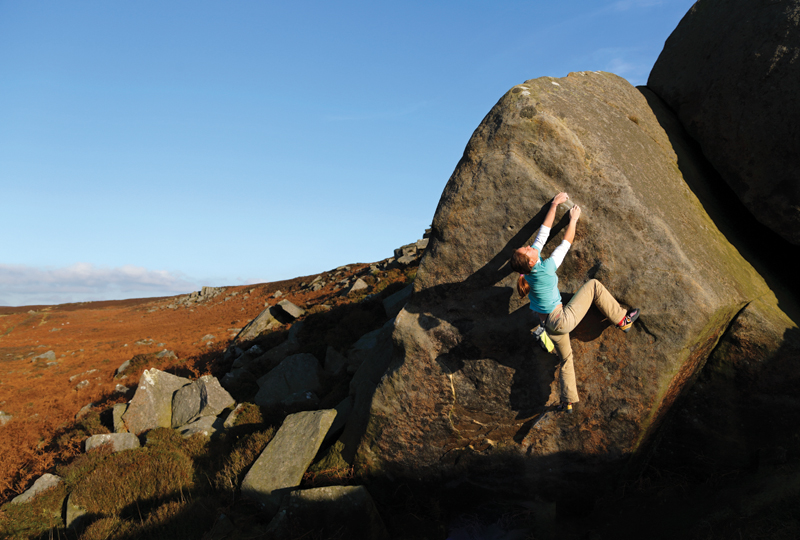 First climbed in 1979 by American Mark Wilford, the popular Attitude Inspector (V6) was on everyone's list and it's easy to see why. This sharp well-defined arête feature is overcome by a wild dyno for a juggy break. If you're tall it's only V5.  Easily one of the highlights is The Alliance (V6), a superb problem offering monkey-up-a-stick climbing up two arêtes to tricksome and thought-provoking moves to a pocket. This is high, scary and, given the landing, spotters are an asset. 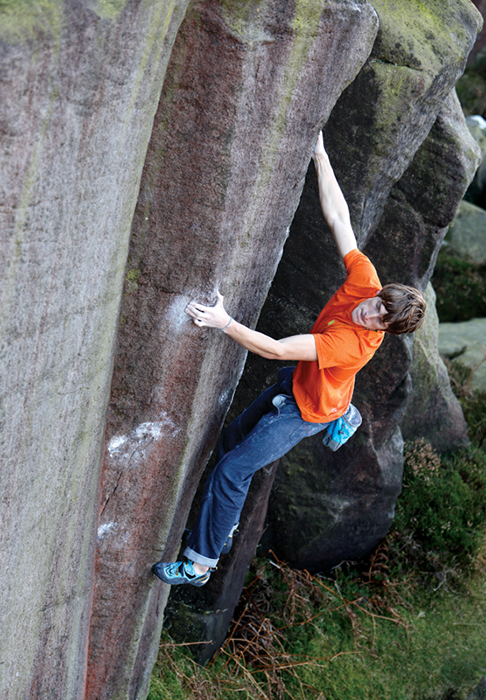 There's a super easier problem called Guppy Arête, a quality V2 with the trick getting established on the arête proper. One area worth visiting for a great collection of problems is The Oak Groove Boulders with 20 problems ranging from V0 to V7; try 7 Ball (V5) and Corner Pocket (V4) on the same block. Triangle Wall is powerful at V5, and is on a free-standing boulder just down from the edge and takes the centre of the leaning wall via a couple of sloping ripples and edges. Left Edge (V3) is a beautiful little problem just left of Triangle Wall and trickier than it looks.

The Rib (V8) is a John Welford problem taking an excellent sequence of moves up a quarried rib with a crux slap to the top jug. And, finally, the Johnny Dawes classic Desparête (V8) hugging the highball twin arêtes right of the Impossible Groove, itself still unclimbed and still a challenge for the future and a good place to sign off on this trip around Burbage South.

There are three guides: Burbage, Millstone and Beyond (BMC) has the majority of the problems except the very latest additions. The most up-to-date guides are Peak District Bouldering by Vertebrate Publishing and Peak Bouldering (Rockfax). Any will serve you well and perhaps the only clincher is whether you want routes too (BMC guide). There’s some online presence, just Google Burbage South Bouldering.

Hathersage is the handiest village a few miles down the road with a petrol station, gear and food shops and pubs. Another café within easy driving distance is Grindleford Station Café for an experience and good fodder. The closest pub is the nearby The Fox House which is often the area that you will park in. For camping try the North Lees site between Hathersage and Stanage Edge (01433 650838). For other accommodation go online or contact the Bakewell Tourist Information centre (01629 813227) who will give you loads of info and all types of accommodation.