Around the Bloc: Brimham

It certainly wasn’t love at first sight on his first forays to this classic gritstone playground, says Andy McCue, but it’s worth persevering, however, because Brimham rewards with some of the finest bouldering in Yorkshire, from jamming cracks and bold arêtes to delicate slab-padding and technical, crimpy walls.

“I often wish they would get rid of all the crap and just leave the good stuff,” quipped Niall Grimes in the Brimham chapter of his Boulder Britain (2011, Ape Index) guidebook and, with almost 500 routes and seemingly endless boulder problems scattered perplexingly among the many mystical Druidic rock formations, pinnacles and woods, the Brimham experience can be a tad confusing and overwhelming for the first-time visitor. Brimham has been the forcing ground of climbing and bouldering royalty for decades from Allan Austin to the golden age of the 1970s with Al Manson, John Syrett and Mike Hammill right through to the likes of Andy Swann, Dave Cowl and Tom Peckitt and testpieces abound for the aspiring boulderer. Landings are generally good but beware the infamous character-building rounded Brimham top outs that involve a combination of desperate grovelling and convulsing beached whale mantels over featureless sloping finishing holds.

Brimham’s boulder problems have been extensively re-climbed and checked for the YMC Yorkshire Gritstone guide and, as part of this, the Font grading system has been used and some problems that previously only had numbers have now been given names. To avoid any confusion over the new names used here the relevant section from the Yorkshire Gritstone Bouldering Volume 1 (Steve Dunning & Ryan Plews, Total Climbing, 2008) guidebook has also been included for reference. This short circuit takes in some of Brimham's best problems from Font 3+ to Font 7c.

A stone’s throw from the car park the imaginatively-named Car Park Boulders is a good place to warm-up on some great low-grade problems. These include Sunshine (Font 3+) up the wall between the two arêtes and Sunbeam (Font 4) up the wall past the break and flake overlap. Fingers and shoulders fully engaged it’s now time to get on some of the Brimham classics. (Area 1.1 and 1.2 Pommel Roof and Pommel in YGBG Vol  1)

The full Joker’s Wall route is a bona fide Yorkshire gritstone classic, testament to the bold, gymnastic genius of John Syrett, who made the first ascent of this E4 over 40 years ago. The thuggy Font 6a problem starts on the large pockets and finishes at the jugs past the hole, where you can be thankful you don’t have to tackle the powerful and strenuous moves to the top. (Area 1.4 Joker's Wall in YGBG Vol 1)

On the slab side of the Cubic Block is this brilliant gem. Start on the perfect rounded jugs and pull up, rocking over the bulging wall on slopers. Add a grade for the sit-start. (Area 1.5 Cubic Block in YGBG Vol 1) 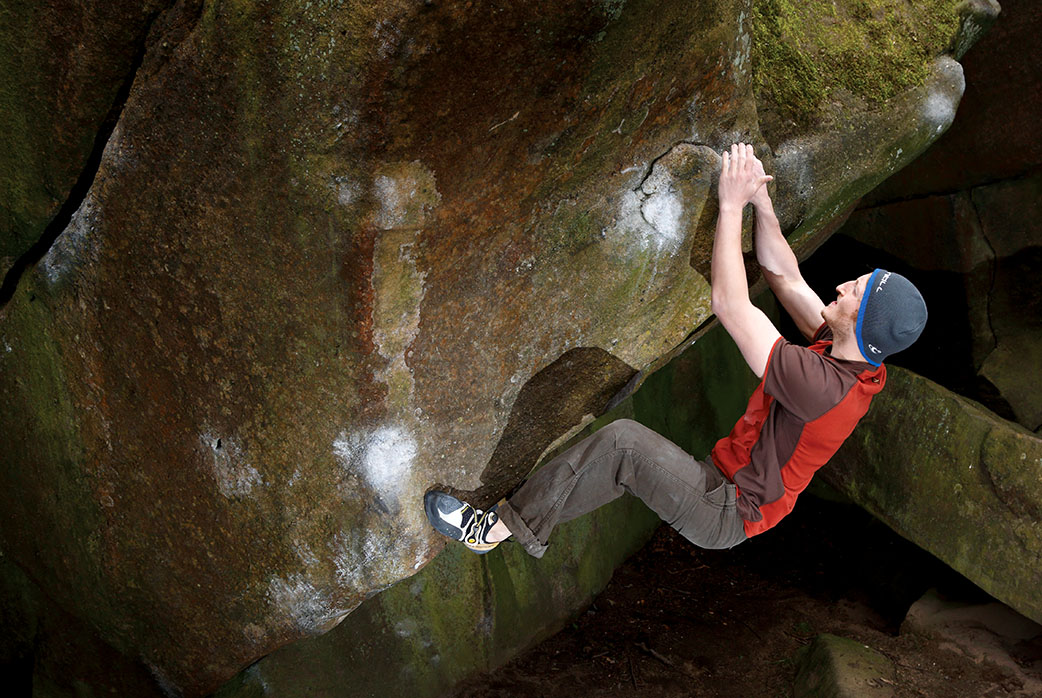 A butch and pumpy number for the grade, it starts from a sitter with hands on the giant flake and heads up and right on obvious features to a crimp and then a committing final move to the ledge. The crack of Minion’s Way on the right is off-limits. (Area 1.4 Joker's Wall in YGBG Vol 1)

You might need a bit of the Fonzie touch to crack the tough start to this. From standing, with both hands on the big hold, awkwardly gain the niche by cranking to a tricky but positive crimp up left and then up the wall to the break where you dismount or down climb (the full E3 6b route continues all the way to the top). If you do it from a sitter under the roof give yourself not only a pat on the back but the Font 7b tick as well. (Area 2.5 Happy Days in YGBG Vol 1)

One of Andy Swann’s Brimham calling cards and a bona fide Brimham classic, which tackles the striking prow direct. Jump on, saddle up and hold tight for the ride, making sure you've got a good spotter. So-named because it used to be finished sitting astride the prow like a pommel horse. (Area 1.2 Pommel in YGBG Vol 1)

The low overhang with the small anchor carved into the boulder contains one of Brimham’s most-prized ticks. Starting from the ledge at the back, latch the big pocket on the lip and make a huge reach for the tricky rounded top-out; absolutely brilliant. (Area 1.3 The Anchor in YGBG Vol 1)

A typically pumpy and tricky Dave Cowl addition to the Green Nose Boulder between Acme Wall and the Lost World area, this beast starts at the far right from a jug and heads left along the lip to a heel-hooking finish up the arête. (Area 2.4 The Green Nose in YGBG Vol 1) 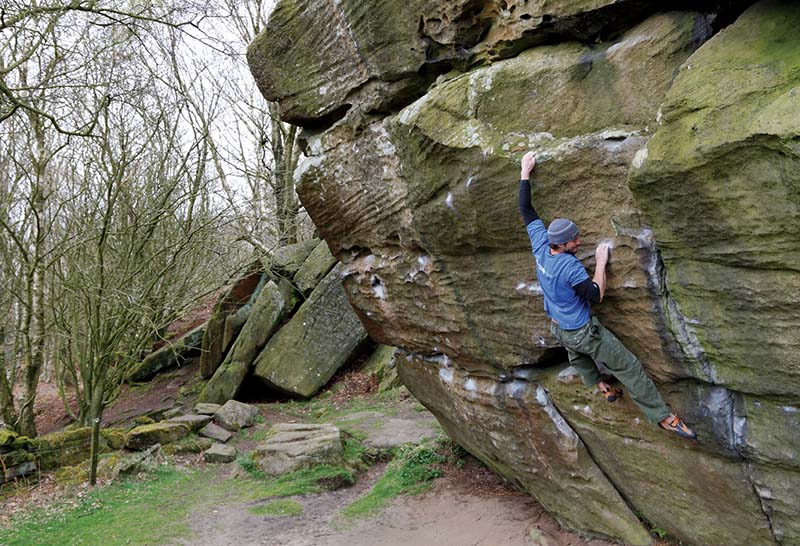 Uber-strong Dave Cowl has been one of the leading activists developing a new generation of classic hard problems amongst the trees and pinnacles of Brimham in recent years. The Titfield Thunderbolt (Font 7b+) and The Ripple Effect (Font 7c) are just two of his lines that have become coveted ticks for the visiting boulderer. We asked him for the lowdown on one of his favourite crags.

Sum up the Brimham experience for us, Dave.

Brimham always feels like a little adventure. The bouldering has a thuggy reputation, but to me it’s always felt quite subtle.

Crimpy Roof (Font 7b) at the Hare’s Head area always makes me happy. It’s super basic pulling in a great and peaceful setting.

Some pretty impressive bouldering royalty has added problems at Brimham over the years. Whose are always the toughest?

That’s an easy one. Andy Swann’s problems are always tough. The guy’s a beast.

Is there much scope left for future bouldering development at Brimham?

I think so, with the likes on Tom Peckitt lurking around in the boulders who knows what will happen.

Situated near Pateley Bridge in North Yorkshire, Brimham Rocks sits on National Trust land. Parking is £5 for a day or free if you’re a NT member. The car park is locked at dusk so be careful not to get shut in for the night. Take care with areas of softer rock. There is sometimes a bird ban around the Fag Slab area and bouldering on the Druid's Idol formation is not permitted.

The YMC Yorkshire Gritstone - Vol 1 guide features an extensive selection of Brimham bouldering in addition to routes. Boulder Britain by Niall Grimes features a limited selection of the classics and the other guide is Yorkshire Gritstone Bouldering Volume 1 (Total Climbing, 2008) by Steve Dunning and Ryan Plews. On the web Jon Pearson’s excellent www.yorkshiregrit.com also covers the best of Brimham’s bouldering with photos and videos (and while you’re there why not click on the donate button to help support the running costs of this valuable, free-to-use resource).

There is a refreshment kiosk by the house inside Brimham Rocks serving tea, coffee, hot pastry snacks and ice cream. The Wellington Inn at Darley (HQ3 2QQ) is great for a post-climb pint and also serves food.