The very mention of the name of some routes can conjure up visions of awe and wonder, not to mention those feelings of trepidation invariably associated with tackling a challenge of significant proportions. ‘Twas thus for me, eventually, after some years of anticipation, setting out on the walk up to Binnein Shuas to finally get on Ardverikie Wall. I’m sure that somewhere in the deep and distant past I had got it into my head that the name was Hard-Verikie Wall? The route, in fact, takes its name from the Ardverikie Estate, also known as BBC TV's Glenbogle, luckily using the former, as the latter doesn’t have quite the same ring.

We are indeed lucky that we are now able to benefit from the passage of countless years and ice ages having scoured the landscapes leaving for our pleasure numerous buttresses and outcrops to marvel at and enjoy; Binnein Shuas is one such wonder. The route is graded Hard Severe and covers 180m in six captivating pitches. It is mentioned in the Scottish section of Ken Wilson’s iconic book Classic Rock and is also given four stars in the SMC guide Scottish Rock Climbs. In addition, just in case you were in doubt as to its quality it is also described as ‘one of the best routes of its grades in Scotland.’ 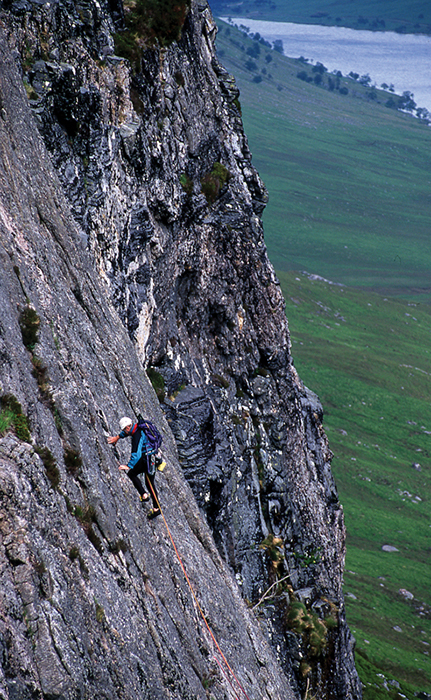 Ardverikie Wall is the undoubted classic of the crag and was first climbed by Doug Lang and Graham Hunter in June 1967. It is said that the well-known activist, Tom Patey, was one of the first to explore the crag, however, conditions at that time were less than favourable, with poor visibility. Consequently, it is believed that he later said that it was one of the best climbs he had ever walked past. The rock is a microgranite/feldspar mix offering excellent friction, although possibly feeling a little crystalline at times and faces south-east giving it a pleasant sunny aspect should the sun make one of its rare appearances. Also with its reasonably low altitude of 500m, it dries relatively quickly following showers. It has to be said that on this occasion we did set off despite the odd shower and were a bit doubtful as to whether the rock would be damp, but were rewarded by dry conditions and rock on arrival.

The climb is situated on the south side of the slabs overlooking the long Lochan na-h-Earba and is, in the early stages of the walk, hidden from sight by the rounded hill of Binnein Shuas. The size of the crag is not apparent until you get close, only then revealing its large slabs and impressive overhangs towards the final half-hour of the approach. Passing the section known as 'The Fortress', the imposing nature of many of the climbs becomes all too apparent. The large obvious blank-looking slab to the right of the crag containing Ardverikie Wall appears smooth and daunting until virtually underneath the route when the more featured nature and gentler inclination of the majority of the route reveals itself. In fact, following the rib on the first pitch and the traverse and subsequent steep section on pitch 2 the slab, on the whole, is at a pretty amenable angle, however, the paucity of protection in places and the relatively remote location requires a competent party and care should be taken by climbers operating at the upper limit of their ability.

The climb starts where the path meets the cliff base, always handy, and it would, in fact, be possible to run the first two pitches together, however, we decided to proceed in traditional style and climb the route in the described six pitches. Being such a renowned climb we were not alone on arrival and so had some time to gear up and take on some fuel and squeeze approach shoes into the pack for the second to carry. My long-time friend, and partner for the day, Jimmy, set off on the initial rib and was soon out of sight and at the belay on the large ledge up on the right, just below the overhang guarding the entry to the second pitch. Joining him and re-racking the gear it was my turn to lead off, following the leftwards traverse to the rib then upwards to the waiting steeper cracks which, in turn, trend rightwards to the foot of the superb and well-featured slab; adequate protection is available up to this point. The angle now eases, however, so does the availability of protection, having fiddled a cam into a small slot it was time to head off finding the easiest line first rightwards and then diagonally left, with a continuing paucity of gear helping to focus the mind as you progress ever upward to the flake belay. Fantastic climbing, never too hard but spicy enough to enjoy.

The next pitch, in contrast, follows the superb flake/crack-line for around 30m before tackling the slight bulge at its end. Much to my companion's delight, the crack allows ample protection to be placed. Jimmy made steady progress up this section enjoying the position and relishing the superb friction that the rock affords throughout. I joined him on the stance and was duly confronted with what constitutes the technical crux of the route. On setting off, some investigation revealed a bomber nut placement relatively low down which helped to steady the nerves whilst making the initial delicate moves rightward up the blank looking slab. There are just enough holds available to help aid progress and sufficient protection to help savour the experience. You soon arrive at the leftward slanting ramp with easing difficulty, this leads to the spike belay in the large scoop above; another great pitch.

It was my turn to relax this time as my leader set off on the penultimate pitch, this follows the left side of the obvious scoop for some way and then head rightwards through the overlap and then continue up left to the terrace. There was a little wetness on this section, however, it was relatively straightforward to avoid this with no effect on the difficulty. Sadly only the last pitch is left and my turn again, all that remains of the climbing is the 40m romp up the easy slab to the top of the route. The major difficulty is locating a belay amongst the turf and boulders at its end.

We were left with just the final task of getting back to our packs. The descent involves heading west along the top of the cliff, locating and following a narrow path until it cuts back down a ramp under The Fortress. It was definitely worth taking our approach shoes up in our small pack, my feet were very grateful on the way down, which as we all know always seems further than it should. All in all an excellent mountain day out and, it must be said, that apart from the superb climbing the experience is in no small part enhanced by the fantastic views across and down to the long Lochan na-h-Earba below and eastwards to the seemingly never-ending hills far into the horizon. The situation definitely has a wonderfully remote and wild ambience making this route a must-do for anybody wanting to climb what is certainly a contender for the best route of its grade and type in Scotland…