A Word on Cheating

Climbers have always found ways of cheating. Whether it’s the knowing belayer who forgets to pay out slack when their noble leader down climbs a move or two when the going gets tough or the sport climber who has the first five draws pre-clipped. These are the tried and tested techniques that have boosted the tick lists of many climbers. The ability to not mention standing on the bolt, or pulling on the draw and rapidly forget such discretions is a well-honed technique amongst more climbers than we would care to think about.

Obviously there are always the paragons of ethical virtue who can only climb things ground-up, can never look at climbing media in case they might blow an on-sight, and who must be carried blindfold to the crag in a sedan chair made of bouldering mats and clip-sticks (except they are unlikely to own either of these pieces of kit – cheating, ain’t it). They’ll tell you they are the real deal until they’re blue in the face, but there will always be a few skeletons in the closet. Maybe the time they abbed a route to clean it and accidentally opened one of their eyes, or the time they wandered around to the top of the crag or boulder and looked at the top holds of their chosen route. Oh yes, let s/he who is without sin cast the first rock.

Of course, in climbing there is blatant cheating – saying you did something when you didn’t. There are many cases of this, but writing about many of the most famous would probably get me sued (so if you want to hear these stories you’ll need to take me to the pub and ply me with drink). Modern climbing methods and techniques have brought us new sorts of cheating and this is what this article is about. The clincher is the fact that these cheats are kosher – they are the ones that will help you to climb better, but which you won’t get told off for by your peers. In fact, you might find that if you start stacking the odds in your favour a little more often, maybe your mates might follow suit. So, here goes.

First up is chalk. The contentious white powder is one of the biggest cheats a modern climber has. Traditionally frowned upon, and at one stage led to the formation of the ethical ‘Clean Hand Gang’, chalk is now widely considered to be acceptable in most places. In fact, we love cheating with this stuff so much it gets everywhere. All the holds on popular routes and boulder problems are often visible on GoogleEarth, or so I’m told. The cheat here is obvious – just wait to try a route until somebody else has been up it and marked all the holds for you. Then there should be no problem with you being able to fathom out a sequence from the deck, or being able to see the next hold when in extremis. This cheat has been the saviour of many, but possibly the downfall of nearly the same number. All it takes is for the first person to chalk up some rock that isn’t a hold, or to overlook a jug and chalk up some tiny crimps that you can’t hold, and the job’s knackered. The problem can be even more depressing when we take the nemesis of the modern boulderer and sport climber – the ‘tick mark’ (or Rookie Stripe, as it’s known in the States). Get too used to slapping wildly for these helpful little chalky lines and you might get a nasty surprise. I vividly remember taking the ride off the top off a route in Glen Coe after I spied a tick mark beckoning me towards the finishing jug of a route that had left me stranded, pumped out of my mind and very run-out. Whilst airborne I pondered what on earth the bird that had shat my illusory tick mark onto the rock had been standing on whilst pooing because its perch certainly hadn’t been good enough for me to hold on to. Beware the bird-poo tick mark – the birds love watching a man trying to fly, and they do this sort of thing on purpose. 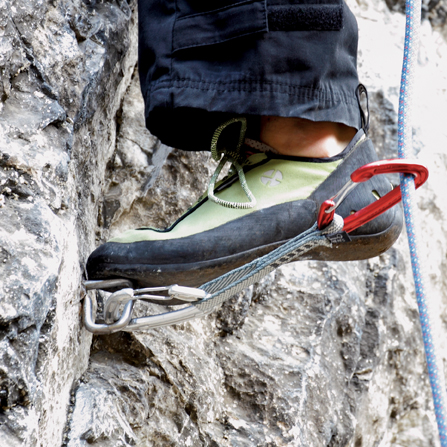 Standing on a bolt. Number 8 in the cheater's top ten. Photo: David Simmonite

So, here are some proper cheats that will work for all you chalk users out there. First, and most importantly, chalk is not quantitatively useful. The more you have on your hands doesn’t increase the grip you achieve. If this were true you would fill your cupped hand with the stuff before you grabbed each hold. Just think of the size of chalk bag you’d need – it’d be like a bucket… oh, I get it. Boulderers – just because your chalk bag IS the size of a bucket, it still doesn’t mean that handfuls of chalk will make you better. No, the opposite is true. Chalk dries your skin so your sweat doesn’t make the holds slippery. If you rub chalk into your skin until its caked, then the chalk acts like a lubricant and your grip is not so good. Chalk up, and then rub and blow the excess off your hands before you climb – a light dusting works best. And now, a sneaky but essential cheat – well-known to all you fans of limestone pocket pulling. As you pull on a pocket, pop a chalky thumbprint on the rock just above the hold as you climb past. Now you’ll be able to see the pocket so you can stand in it in a move or twos time thanks to your thumb’s little helpful tick mark on the rock.

I’ve considered your hands, so now let’s take a moment to discuss rubber. You have an amazing pair of climbing shoes that have sticky rubber on the soles. Unfortunately, they are not as sticky as they were when you bought them, and this is not good. The charming shopkeeper who showed you that the boots were so sticky they stick to one another forgot to mention that as soon as you’ve bought the shoes and got the soles dirty, they stop working so well. Rubber is funny stuff and gets less and less sticky the more you use it, unless you keep it clean. However, I’m not just talking about wiping the sheep poo off them with the backs of your trouser legs before you pull on. No. You can do better than that. Rubber oxidises, and this layer of oxidized rubber on the outside of your shoe soles is what will make you slip around as it’s just not grippy any more. Spitting into your hand and squeaking the soles of your shoes rubs this oxidized rubber off and exposes the really fresh sticky stuff beneath. Try it and see. The palm of your hand will have some little beads of old rubber in it après squeak, the absence of which should make all the difference to your shoes’ performance.

Whilst I have barely touched the dark secrets in the experienced cheater’s repertoire, I feel compelled to touch on a new trend. Yes, certain DIY stores now stock telescopic ladders that fit nicely into a bouldering mat. Now you can clean, chalk, inspect and have a good feel of all of the holds on any project without recourse to uncivilized activities such as abseiling. There are two points to make here. Firstly, if you’ve been up the problem on a ladder, can you really make a ground-up ascent? Pretty obviously not, so let’s not use the excuse that the ladder was on the ground and I went up it, so it’s ground-up as an excuse, please. Secondly, the metal tops to these ladders will do more damage to the rock that a dry-tooler on amphetamines, so if you have a set of steps, make sure you’ve wrapped some sort of rock-protector around the top of them.

10.  Pre-clipped Gear – most popular with sport climbers, where having the first two or three bolts pre-clipped onany route increasingly seems to be the norm. Unless there is a good reason to pre-clip the first bolt/s, it’s cheating.

9.  The Boulder Mat Stack (or ‘Starting from the Ladies Tee’)

8.  The Bolt-Head Stand (that handy metallic foothold for when high on the face)

7. The Beta on-sight (ideally an ‘on-sight’ of a route you’ve been on before)

6. The Finger-Rock-Lock – Slam in a Rock 7, and then pretend to finger jam the crack above whilst your hand wraps around its new juggy metal saviour.

5. The B&Q Ground-Up (inspection off a ladder isn’t ground-up any more)

4. The Ballpoint Ascent – a piece of piss to get, just tick the route in the guide and tell everybody you’ve done it (not as good as a redpoint, but often a lot quicker)

3. The Slump – clip a high runner, stand on the rope and slump down in your harness, to give yourself a ‘self-belayed’ rest; the really cunning might trap the rope with a hip and the experts have perfected the rope/leg wrap to really optimize this beauty, subtle but effective.

2. The Mid-Route Belay – clip your harness to the runner direct, lean back and relax; perfect for long sport routes where your belayer can’t see you, not good on long trad routes when you pull the runner out…

1. The Early Riser – get up at 4am, go to the crag and come back at breakfast time with tales of derring-do (like ‘ballpointing’ for insomniacs); rapid solo ascents of E7s and Font 8Bs are the order of the day here – not for the faint-hearted, or intelligent.