A Walk on the Southside – Kinder South Cragging

The Peak District is famous for easy access, cragging opportunities. As such it doesn’t usually feature on the lists of those looking for a day out in a mountain environment. But switch moorland for mountain and it’s a different perspective as suddenly the whole of the upper Dark Peak comes into play, specifically, the Chew Valley, Bleaklow and Kinder.

We’re not talking about a three hour walk-in as required to the likes of Scafell East Buttress, but there’s plenty that’ll take you a good hour’s hard uphill walking to get to at around the 1,500-2,000ft mark, and in a place that doesn’t look and feel a million miles off a mountain environment. If you’re looking for a get away from it all crag-to-yourself, then the northern crags on Kinder are a good place to look for some adventure. If, however, you’re looking for a sunny outlook then head for the southern Kinder crags. 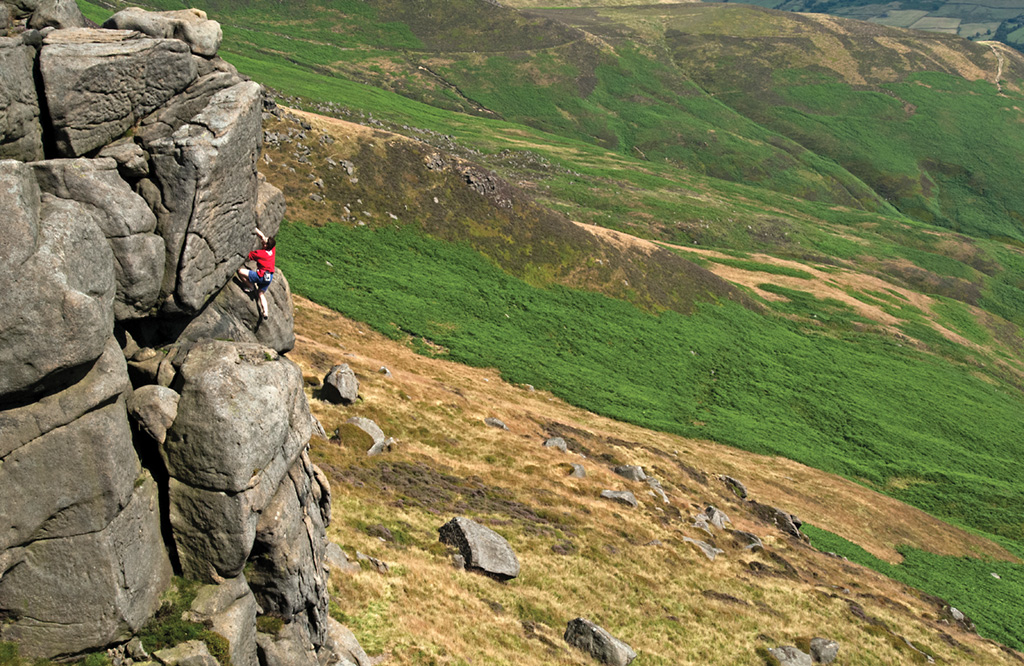 The popular myth is that Kinder is a big, boggy hill and by association the crags are wet for much of the time and only really come into condition at the height of summer and/or for limited periods. That might be the case for some of the Kinder crags but it’s certainly not the case for the Southern Kinder crags that ring the Edale Skyline. Many of these hardly take any seepage and are dry for much of the year. I used to think that Kinder is no place for a self-respecting crag-rat to be seen. But when I finally got off the sofa and mustered the effort to head up there, I was shocked by what I found and if only I’d known just how good it was up there, I would have gone earlier.

The Kinder South crags are split naturally into western and eastern areas, the split coming where Crowden Brook hits the Kinder Plateau. For starters, the western crags: Upper Edale Rocks, The Pagoda, Crowden Towers and Crowden Clough Face are less extensive that their eastern cousins. There are two approaches, either target one or two of the harder routes on these crags or else go light and visit all of them in turn for a great day out. Three-star routes like Herford’s Route (HVS 5a) on The Pagoda or Arabia (E2 5c) on Crowden Clough Face are amongst the best routes anywhere. For harder routes try The Mentalist Cupboard (E7 6c) at Upper Edale Rocks or Groove Rider (E7 6b) at Crowden Clough Face which should provide an ‘interesting’ day out. And whilst there’s not unlimited numbers of routes to do there’s a decent selection of excellent routes around the E1 to E5 grades too. What these crags lack in volume they more than make up for with the fine rock architecture.

Crossing Crowden Brook we come to the eastern crags. Although there’s eight crags in this group, two of them, Upper Tor and Nether Tor shine out. However, let’s firstly talk a little about the other crags as there’s worthwhile climbing on these crags that shouldn’t be missed if you have the time and inclination. Fox Holes, the most southwesterly of the crags, actually faces northeast and overlooks Grinds Brook itself so it’s a bit of an anomaly, getting the morning sun only. Amongst the two dozen or so routes at Fox Holes, there’s four cracking E1s: Nightshift, Gillott’s Point, Three Babbling Idiots and The Powers That Be. It takes a little time to dry out but if it’s hot then it’s a great place to get out of the heat of the afternoon sun.

Grindsbrook Towers are the next crags along overlooking Grinds Brook where it leaves the Kinder Plateau. Byne’s Crack (E1 5b), first climbed by Eric Byne in 1933, is an impressive piece of climbing. It’s a weird place to be honest and the grit is well-rounded which adds to the bold and impressive feel to the place. Working eastwards, Far Upper Tor, Grindsbrook Rocks, Secret Buttress and Ringing Roger are all smallish crags generally tucked below the skyline.

Seen from Edale – the obvious approach point – both Upper Tor and Nether Tor are easily identifiable. Both take about 60 minutes to approach but they can be connected easily by a short 15-minute walk along the good path on the lip of the plateau so visiting both in the same day is not only easy but recommendable. So park up in Edale, the railway station is a good bet, and then head up into the village of Edale and then keep going. Depending upon whether you go to Nether Tor first or Upper Tor will dictate exactly which path you take but follow instructions in any of the guides and you be fine. If it helps you decide which to visit first, Upper Tor gets the sun earlier in the day and Nether Tor keeps it later into the evening. 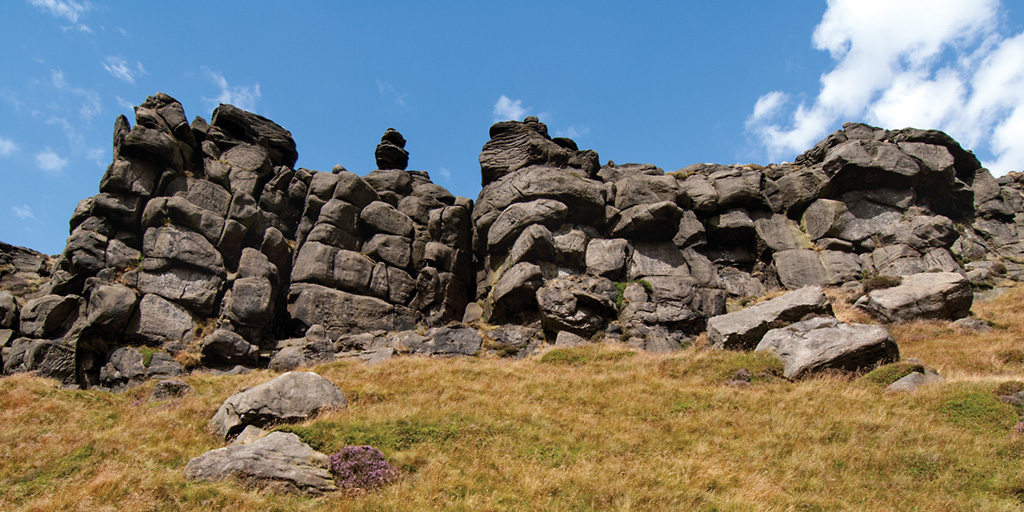 Upper Tor is a quality, compact crag offering a good selection of routes from Diff through to E7. This is a great place to lose your Kinder virginity. The rock is rough, clean and refreshingly unpolished; hardly surprising given the location. It’s not unlike stepping back in time 25 or perhaps even 50 years in that the cracks still have rough pebbles within them and the surface of the rock offers a friction that climbers who solely frequent the more popular Eastern Edges can only dream about. Aesthetically, Upper Tor has tower-like abutments featuring well-rounded cracks and breaks as well as some big roofs. 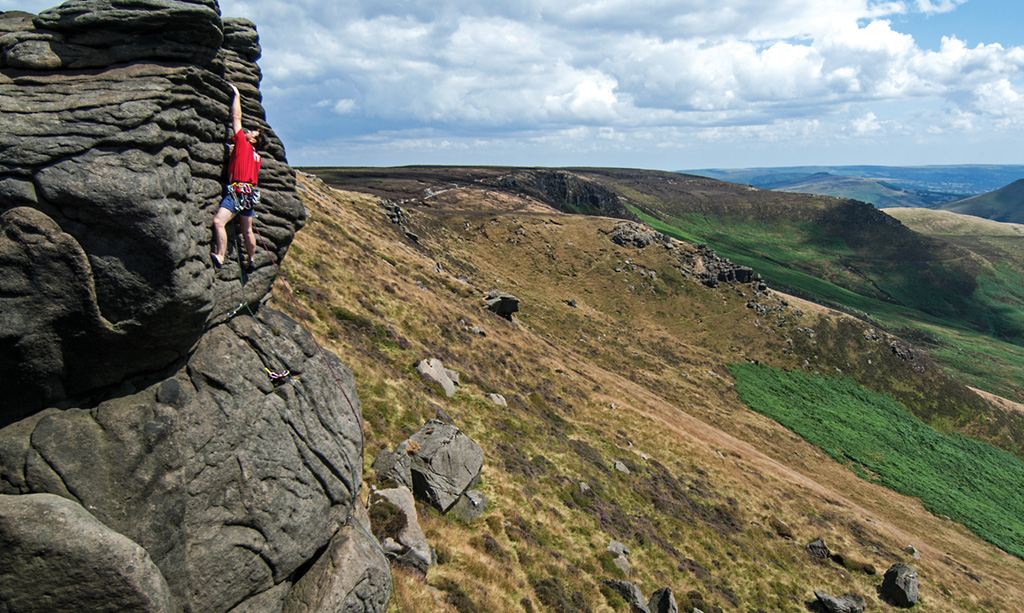 On the far left (facing in) Upper Tor Wall (HS) is an uber classic not only offering a three-star route with big moves and big features – one of the best at that – but it gifts your best mate a grand opportunity to photograph you amidst the scenic splendour. The Ivory Tower (E1 5b) is the next classic on the list. This feels a big route and in fairness it isn’t short for grit given that it’s 20m long. It weaves its way up the buttress finding the passage of least resistance. Assuming that you survive the traverse left and so are able to get established onto the upper reaches of the route, the wrinkled headwall is a joy to climb. It’s been described as 'varied, devious and interesting' but really that doesn’t do justice to one of the best routes around. Brutality (E1 5b), a smidgen farther right, is everything that you’d expect of a route labelled with such a moniker; brutal, further description seems somehow superfluous. Don’t walk on by though, it’s actually steady-away until the final crack which provides both the crux and the brutality bit.

The next target, and one of the more impressive features at Upper Tor, is the big roof to your right taken by Robert (E2 5b) and Do the Rocksteady (E7 6c). Chances are that you’ll marvel at the latter and shake a stick at the former. You should, it’s well worth the effort. By the way, Robert was formerly graded E1, so at E2 it’s something of a gift as it's well-protected, short and offers good finger locks. In truth, it probably is E1 but everyone deserves an easy tick every now. As for Do the Rocksteady, that looks gnarly and no gift at all. It took Sam Whittaker, and his mighty biceps, to send that beauty back in 2001. 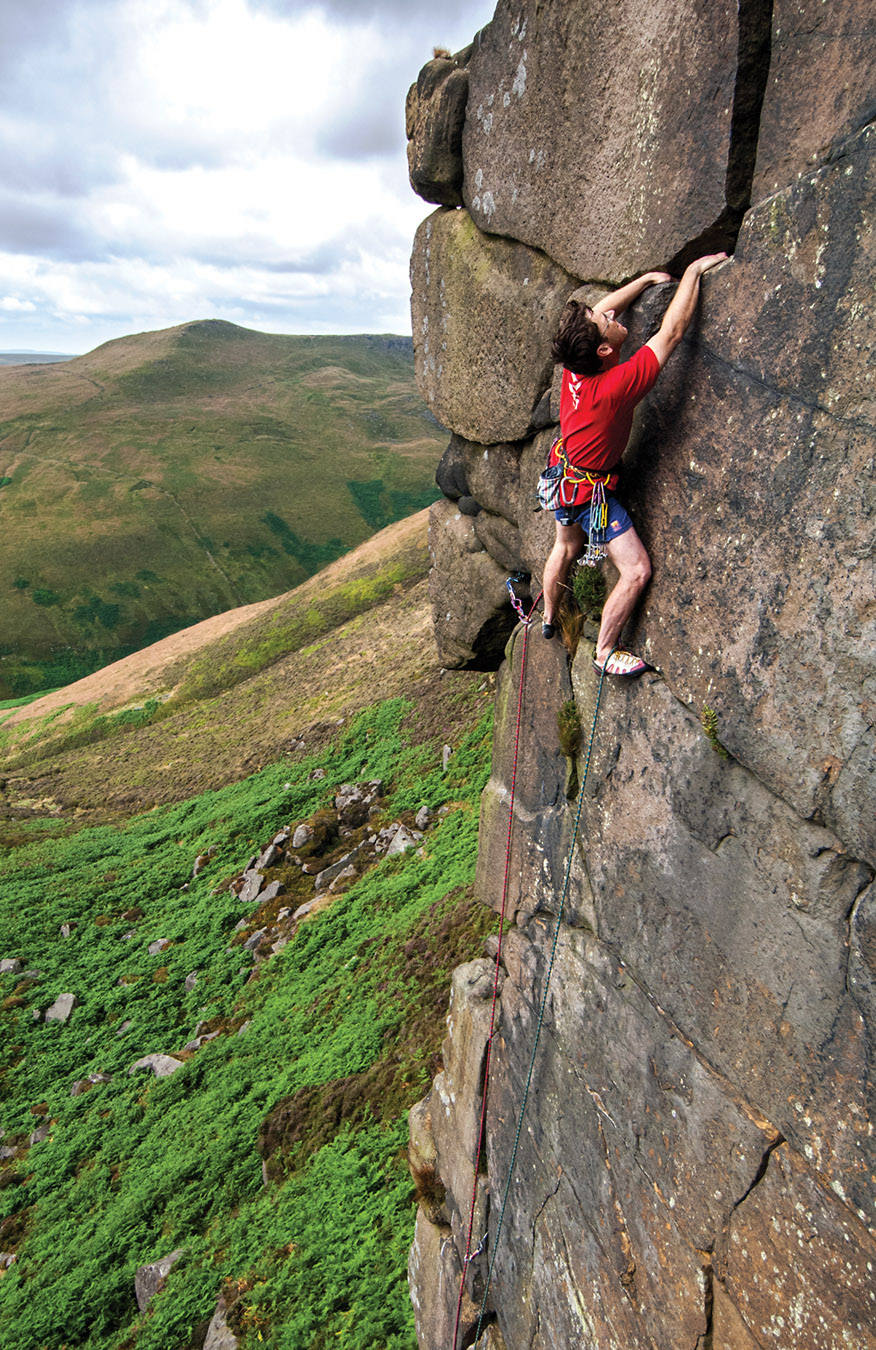 Finally, then, Nether Tor out to the east is the final jewel in the crown of South Kinder. Visually, it’s quite different in appearance to Upper Tor, less rounded and flatter with more walls and arêtes to climb. It’s bigger, more spread out and not quite as vegetation-free, though that’s not to say it’s a rambling mess – it isn’t – but it just isn’t as compact as Upper Tor.

Moneylender's Crack (VS 5a) is the first classic route to get stuck into. At 20m it’s another long route and the top is steep and thought provoking. Generally, there are good holds throughout and it climbs well. Right again, the crag loses height somewhat but there’s a striking arête which, whilst being shorter than most of the route thereabouts, is one of the finest E4s on the moors; Edale Bobby (E4 6a). Vintage Steve Bancroft, Edale Bobby dates back to 1987 although small cams have tamed it a little. Nevertheless, the usual bold, technical climbing is excellent although it does need a confident and skilful approach. Farther right again, just before the crag splits into an upper and lower tier in fact, is Flash Wall (VS 5a). This is steep but well-protected and although it’s based on a crack it climbs like a wall and is very definitely one of the best classics of the area.

Moving right and onto the upper tier, there are two arêtes which offer good climbing – Recoil Rib (E3 5c) and T’Big Surrey (E5 6b). Moving right again, the crag rears up in a manner not dissimilar to Hen Cloud. The Roman Nose (HVS 5b) and Never Say Never Again (E1 5b) both take the full height of a 27m-high tower and given their height alone it’s worth getting them done if you’re passing. Finally, Three Step (HS 4b) and Pocket Wall (VS 4c) are the best of the rest, giving good, if challenging, climbing for their grades.

So there you have an outline of the cragging on Kinder South. Head up there on a spring or summer’s day with a rack of gear and a pair of ropes between you and a mate and you’ll come back down at the end of the day knowing that you’ve earned your ticks. All the routes mentioned definitely aren’t out of place in a list of the Peak’s best routes and you’ll be amongst the few that will have done them as well. 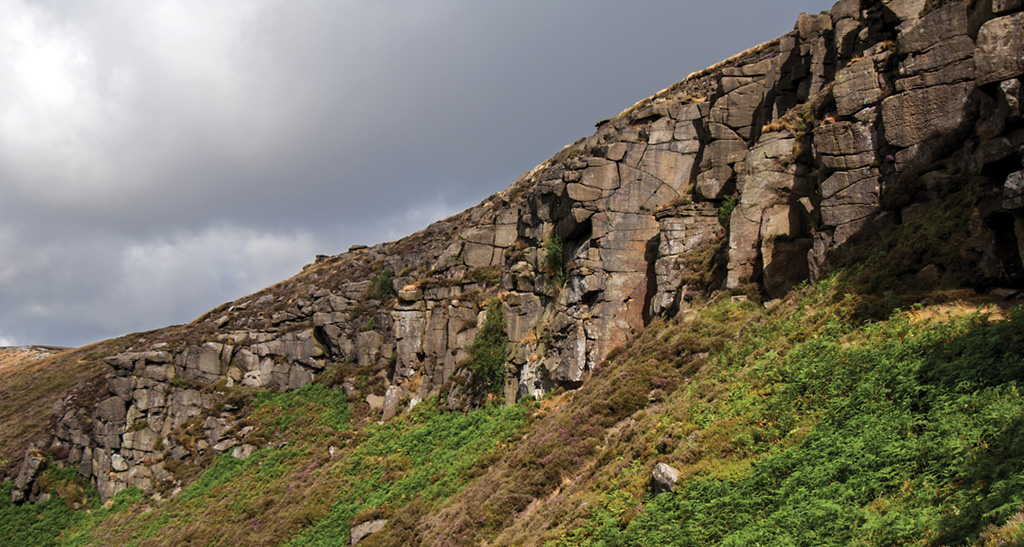