Bouldering has given me a huge insight into myself as an individual. It’s taught me about drive, patience, confidence, strengths and weaknesses. Above all has given me a huge focus in life, whereas before I discovered climbing, there simply was none. I’ve been lucky enough over the years to have visited and discovered some unbelievable places and countries, and have met some amazing people from all walks of life along the way, and it’s these things I guess, that keep all of us ticking in this sport of ours.

For me, personally, although repeating other boulderers’ test pieces is amazing and very rewarding, it’s about the unknown; the endless search for the perfect problem, the perfect move. It’s about visiting the wondrous arenas that bouldering can take us to and then using these environments and blocs that we come across as a medium to develop and achieve new personal heights. Finding and opening up new problems in the mountains, whether it be Wales or elsewhere is what drives me personally to continually chase myself and never give up. When I find a new line, it is always one of the most brilliant things I can imagine. I think that for the most part, the sheer difficulty of a hard problem leads to a purer sequence and a lesser featured face to work on and create. 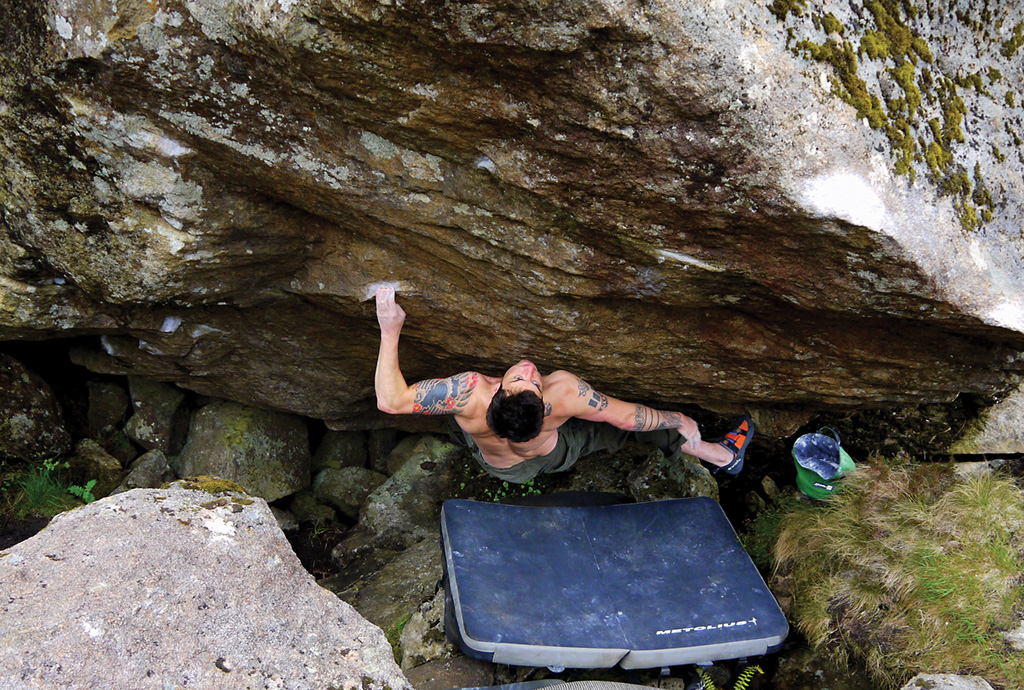 Instantly I’m sucked up into fresh obsession; searching for the holds, visualising the sequence, cleaning, brushing and constantly standing back to admire the evolvement. Chalking the holds, checking out the sequence – creating, to quote DG – ‘The New Rig’ (DG is Dave Graham who refers to all of his new finds/problems as 'rigs'. Ed). I remember clearly doing this on A Life Aesthetic in Moel y Gest a few years back, having been shown the new area by Dave Noden. Dave had pretty much cleared up, having himself been ferreting away up in this old and remote quarry, on the free-standing granitesque boulders high up above the village of Porthmadog.

After having been shown the area and the lines, my mind came back to the same old: has this been done? Hidden in the far corner of the quarry, amidst a couple of old pine trees, stood a lone boulder covered in moss and lichen. It was about to begin again. I checked out the potential, and it was awesome. I visited again and then spent three hours carefully cleaning, looking for the sequence and visualising as I brushed. Looking for minute footholds on the mostly blank face, trying to work out how this would feel, where I would need to position myself to balance. Once clean, the line was unreal, and the sense of having just converted a simple piece of stone into something so much more powerful was yet again in place.

I guess there is always the issue with the nature of none having ever attempted virgin lines like this – you never can tell how difficult it’s going to be. I sat down after arranging pads, chalked up, ready to go… No lift-off. Damn it – I couldn’t actually get off the ground. Along with the issue of difficulty, there is also the problem of obsession. I drove over on two other separate occasions that week (achieving lift-off) and then took a week off work. After hitting the quarry four days over six, I got the send. Yet again, I lucked out – the moves were unreal, simple and powerful and the footwork precise (four in all); a real boulder problem in a very different and beautiful area. When you combine a powerful sequence like this, in an area so calm and tranquil it’s such juxtaposition – these are the special moments that inspire me to push my limits constantly.

North Wales is a melting pot of varying quarters, all of which have their place in my bouldering life. From the light feel of the Llanberis Pass to the ominous darkness of the Ogwen Valley and over to the sun-kissed boulders of Porth Ysgo; from the wave-washed limestone down on Angel Bay to the dusty Parisella’s Cave. All of these places have one thing in common – they offer moves. 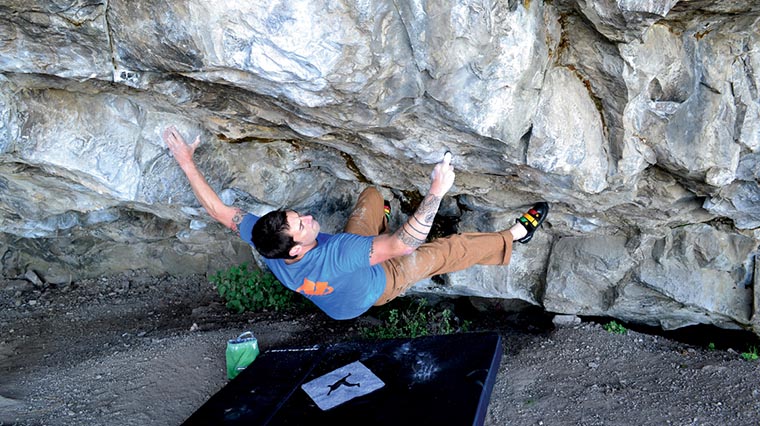 Parisella’s Cave on the Great Orme is a fantastic example of how a cave once deemed to be a pointless dustbowl is now the stomping ground for a huge team of horizontally obsessed boulderers from all over Britain, having inspired visits from others from all over the globe. It is the epitome of hardcore and for the sheer volume of hard problems per square foot, I really don’t think it could be surpassed.

I was fortunate that when I began my cave apprenticeship some 15 years ago, hardly anything there had been climbed, or even attempted. Moving through the now classics left by Moon and Moffatt from the ’80s such as Beaver Cleaver and Rock Atrocity amongst others, I got to raise the game in 1997 with the first ascent of Lou Ferrigno at Font 7c+, then on to Crucial Times in 1998, then onto Trigger Cut in early 2002. All of this culminated in 2006 with a link from Crucial Times into Trigger Cut to give the grand finale, East Coker (Font 8b/+). The cave opened up my imagination as to what was possible for me as a boulderer, and I’ve since carried this with me all over the globe when searching for inspiration when searching for the move.

Others boulderers have now added their own test pieces there, motivated maybe in their own way to achieve the feeling that I believe only a first ascent can give. The feeling that you have just climbed something that nobody else had and pioneered the moves and the standard of that piece of rock, but most importantly, you have created something from nothing, which is one of the best feelings that the sport can give. So, I’ll continue with my obsession, and keep dreaming of the lines that I’ve not yet found, reflecting throughout the journey, on how fortunate I’ve been in my career; in my life aesthetic.