Will Bosi talks about La Capella

As we reported earlier, Will Bosi recently redpointed La Capella (F9b) at Siurana to become the first British climber to climb F9b abroad. 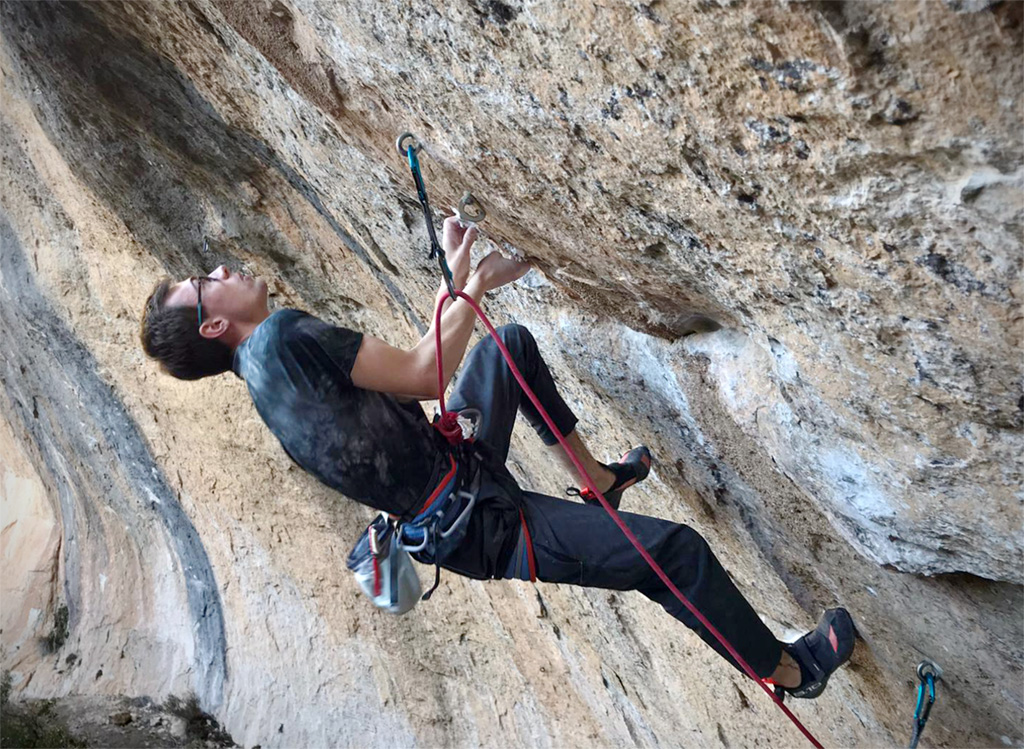 Will Bosi on La Capella

Bosi’s success on La Capella came at the end of his month-long trip to Europe during which climbed at such hotspots as Osp, Santa Linya, Margalef and then finally, Siurana. Like many athletes Bosi took to the rock over the New Year, no doubt to recharge his batteries ahead of the 2020 competition season.

The early part of his trip was thwarted somewhat, not least with bad weather, but Bosi’s psyche was clearly still high when he rocked-up in Siurana at the end of his trip when he got straight down to business on La Capella.  Remarkably, his almost did La Capella on his second day; despite the usual fatigue and sore skin however, he logged the all-important successful redpoint on his third day. Bosi’s repeat of La Capella is only the fourth ascent of Adam Ondra’s test-piece at Siurana. At the time of his first ascent in 2011 Ondra took a total of nine days to piece the route together. After his ascent Ondra described La Capella as ‘an extremely bouldery route’ – a sentiment that Stefano Ghisolfi clearly agreed with when he made the second ascent in 2018 when he said; ‘one of the most savage and intense route I’ve ever tried.’ Daniel Woods made the third ascent – in five days – also in 2018.

Climber has been in touch with Will for his thoughts on his ascent of La Capella, what he’s planning next and the Olympics…

Firstly, congrats on La Capella – ‘one of your dream lines’ – especially at the end of your trip. It seems that you ‘connected’ well with La Capella; did you feel it was possible straight away?

I went to try the route just to see how hard it would feel so I would know how much stronger to get, but straight from the first go I knew I was strong enough and if I got lucky I could send it now!

La Capella is relatively short but it has two hard boulder sections – right? Can you talk us through the various sections and how the math stack up?

It’s very short – about 10/15m in total. The top half is about a F7a route so all of the hard climbing is at the start. The start is split into three boulders, two F8As one after each other then finishing off on a 7B boulder.

What was your biggest problem on the route?

Skin and conditions. I had destroyed my skin the week before in Margalef so I needed to use a lot of tape and it was very hot and humid in Siurana. However, I watched Alex Mego’s film and remembered there are no excuses so I went all in I forgot about that and just tried as hard as I could!

Let’s talk about the rest of your trip starting with Catxasa the F9a+ you’ve been trying in Santa Linya. You first tried that three years ago and then again this trip but you seem to be having some bad luck on that route firstly injuring a finger and then getting washed-out this trip. Can you talk us through how Catxasa was going and how that feels to you relative to La Capella?

Yes on my first redpoint day three years ago I hurt my middle finger on the crux mono move. I actually avoided monos since then but I got psyched again so started training monos on the fingerboard in preparation. After the last two months my monos felt good and it definitely was noticeable on the route!

This trip the route was going very well and I was confident I would send it on the next day or two but that was stopped by a huge storm that flooded the cave.

They are two very different routes so they’re hard to compare but I’ve spent more time on Catxasa already so who knows.

Good the hear then that your ‘mono’ training had paid dividends

Definitely, I felt super good on the mono crux and I didn’t feel like I would get injured again on that move.

Like many climbers you seem not to like unfinished business; do you see yourself going back for Catxasa again?

Yes! I really enjoy trying Catxasa so I will definitely try and get back to finish it soon!

Before Santa Linya you were in Margalef on a project. How was that?

The route is amazing, by far one of the most fun routes I’ve tried. However, it is the hardest route I have ever tried, I only just managed to link it in three parts by the end of the trip. It feels like F9a to an 8B boulder.

You started your trip at Osp on Martin Krpan (F9a) but you said that wasn’t your style?

No that’s why I chose to try it as I knew it would be good training and a big challenge but in the end I couldn’t send it as I really struggled to rest in the steep roof.

Let’s turn to some unfinished business at home; yeah, we’re talking Mutation! You must be psyched to put that to bed ASAP?

Of course! It’s been too long now, last session I had was only an hour-long working sections but the route felt a lot easier than previously and I’m sure I can send it with the good conditions.

It’s over 20 years now since Steve did Mutation; that’s both a remarkable record for a route to go unrepeated and amazing that it was done so long ago? Any thoughts on how that stacks up?

Over 21 years now, Steve climbed it the month before I was born! I find it crazy it’s not been repeated. Maybe as Steve only graded it at F9a at the time. I’m sure it’s F9a+ however and that would make it the second F9a+ after Open Air, four years before Biographie.

And Rainman (F9b) at Malham; you interested in that?

Finally then, now you’re back to the UK and training for the European Continental Championship and Olympic qualification. Best of luck with your training; doing La Capella so quickly must be a real boost to your confidence?

Yes, it’s very nice to know that I’m feeling strong at the moment and that I can focus all my energy on training movement.

Fingers crossed that you qualify for the Olympics; who do you see as your main competitors in the forthcoming European Continental Championship for that elusive Tokyo ticket?