Wideboyz, Tom Randall and Pete Whittaker, have just completed what might well be the ultimate UK crack climbing project – The Great Rift (5.13), a 2500 foot-long splitter beneath a motorway bridge! 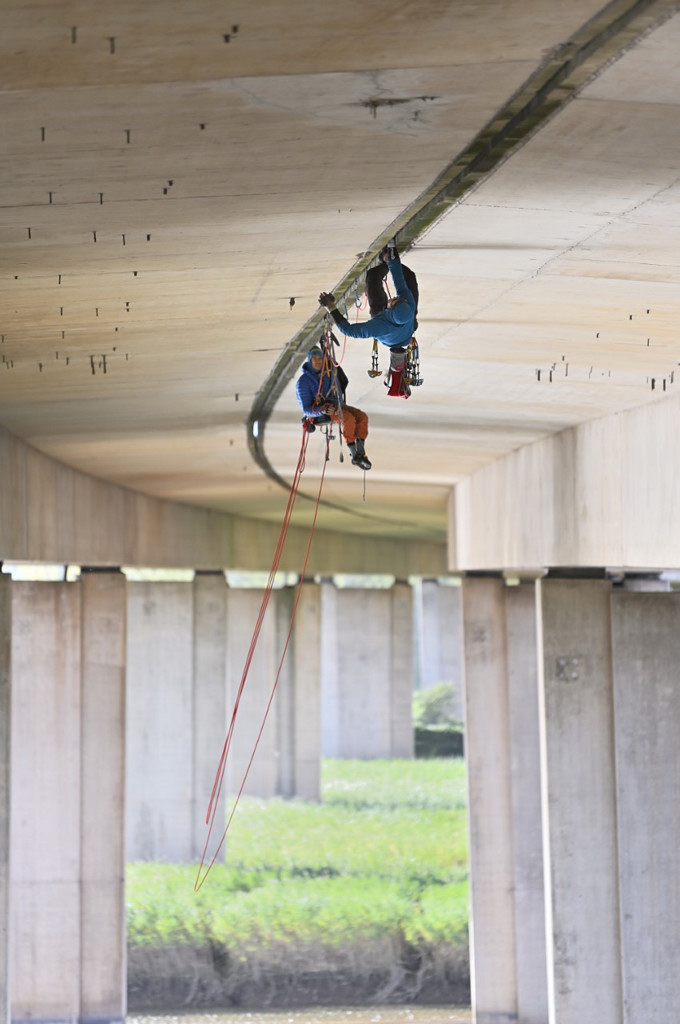 Thanks to the pandemic crack climbing beneath road bridges has become a thing since Robbie Phillips kicked off with his first effort in Edinburgh in Feb 2020 – click here for that report. Since then, Wideboyz Tom Randall and Pete Whittaker have got involved and the cracks have gotten longer and harder.

Tom described how their latest project came about: “As usual me and Pete got completely obsessed with finding a "monster". This last summer saw a tip off from @mark_bullock & @pajama_tom and the M5 delivered a 2500ft proj. MEGA!!”

Pete explains how their plans developed and how they finally succeeded: “After a summer of training specifically for this route, we made 3 recce trips to the bridge, had one failed attempt which got us to just under halfway, and managed it on our 5th visit. The ascent was done in team free-style, meaning one person lead, the second aided, then we swapped for the next pitch. We swung leads for its entirety.”

You might think that a motorway bridge is a pretty solid structure but in fact, they’re surprisingly dynamic and that gave the Wideboyz added interest as Pete explains: “Due to the small variations in the crack width and movement of the bridge from the traffic above, some pitches were harder than others. The worst pitches were when a double Eddie Stobart passed over the top whilst trying to place gear, that always made things feel pretty cruxy.”

Pete explains what it was like living and climbing on a multi-day ascent underneath a motorway bridge: “After 4 days and 3 nights on the roof, the noise of cars and HGVs fizzled out into a blurry hum.”

Climber asked Tom what was the most satisfying part of The Great Rift; the training, the climbing or finishing and getting a shower?

“I think ultimately it was a blend of the experience itself and the moment that both me and Pete got down to the ground at the other end. We've done so many weird and wonderful (and madcap?!) adventures together, that it's great to see yet another one have all the little pieces work. We were pushed freaking hard, it required full-on teamwork and we got very psyched!”

And how did your brush with the law go?

“We did have a few chats with the police on this mission and our first attempt was a bit of a disaster as we were asked to come down. In the end though, we managed to keep the lines of communication just wide enough to get the project done and whilst I would not suggest that this is now an item that everyone's going to be able to do without further issues with authorities, it was relatively trouble-free in the end.”

Finally, we asked Pete what he thought was the most difficult part of doing the route? “Definitely just the physical nature of doing (relatively) the same move for four days. That’s pretty much unheard of in climbing. It wears the same muscles and there is not much option for spreading the load to other parts of the body. Also not being able to stand on any ledges or put your feet on the wall like you would when usually big walling actually takes its toll over 4 days.”

They sound finished with bridgeering now but we asked Pete if there was any chance they’d go back for an ‘In-a-day’ ascent?

“No!! We've completed what we set out to do, I have no need to be doing that. I'll look forward to watching someone else go through the effort and pain to do that. Good luck to them :)

The description for the route is…

The Wideboyz’s ascent was filmed for the Reel Rock Tour which is due to be released in March 2022.