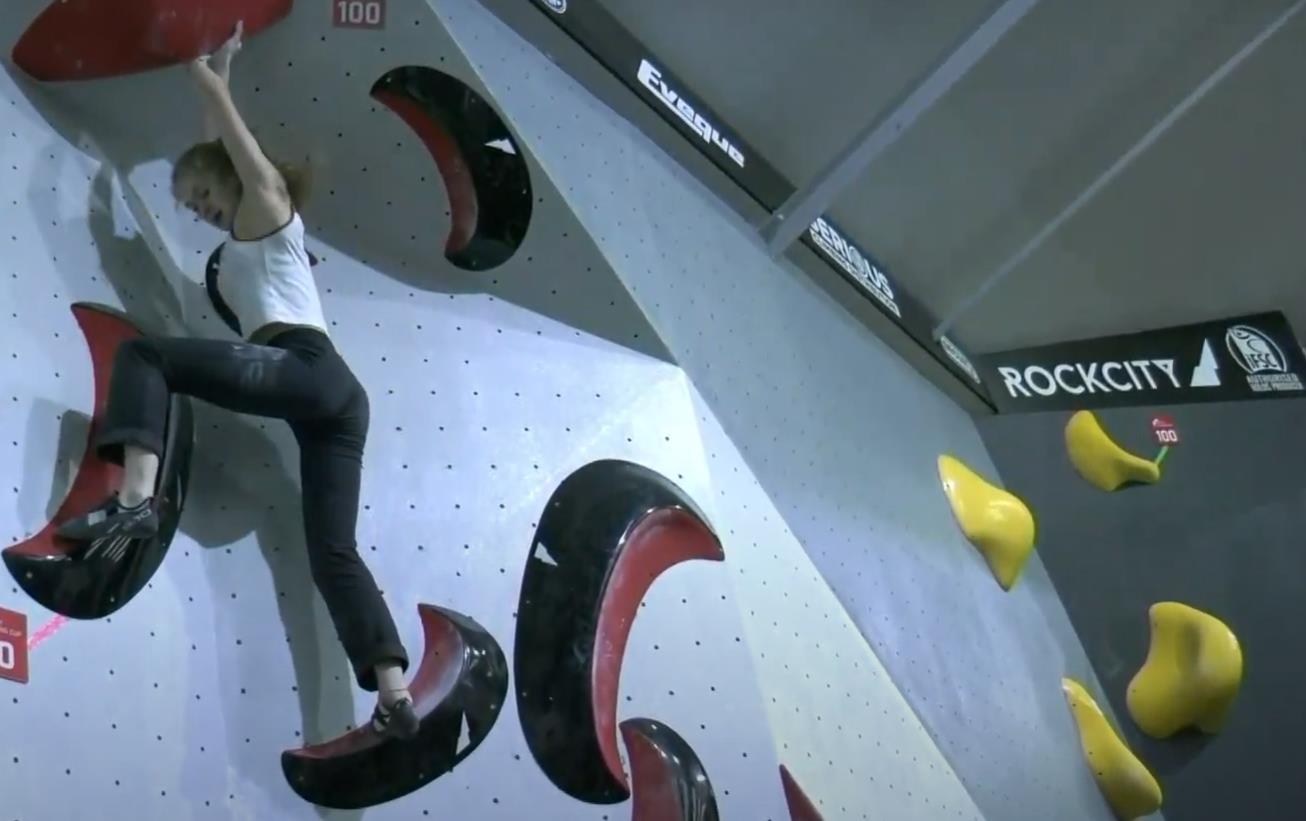 In the first UK climbing competition since Covid-19 hit back in the spring, invited competitors gathered on Saturday to contest an invitation bouldering event at Rock City. The event, which was live-streamed on BBC as well as YouTube, saw many of the GB Climbing Team athletes in action on a brand new wall at Rock City.

Percy Bishton, head setter for the 2021 bouldering event at the Tokyo Olympics, was joined by several other well-known setters such as Jamie Cassidy and Rob Napier; unsurprisingly there were a number of blocs which featured jamming sections!

The competition featured a new “easier to understand” scoring system and a whole wall full of new volumes and holds – many of which dual texture - by Rock City and Serious Climbing.

Saturday morning saw the competitors on the wall for first (semi-final) round. As expected it was closely contested round. Louise Flockhart and Gwyneth Utley finished in joint first place having flashed three of the blocs and topping the fourth, second go. Rhoslyn Frugtniet finished in third place also with three tops. Holly Toothill, the 2019 British Bouldering Championship winner, only topped three of the blocs and finished the round in 4th place. Thea Cameron and Robin Casey were the two other qualifiers for the finals.

Max Milne topped the Men’s semi-final round with Jim Pope, Hamish McArthur and Kieran Forrest all coming in very close behind. All four men, together with Louis Parkinson, topped every bloc. Max Milne was the only climber to get a clean sheet with four flashes in a storming performance. Matt Cousins qualified in 6th place with three tops.

The climbers were back on the mats again late afternoon for the now-familiar four-bloc round. As usual, the four different blocs ranged from technical (steep) slabs to complex overhanging puzzles; W2, as well as M3 and M4, had jamming sections. 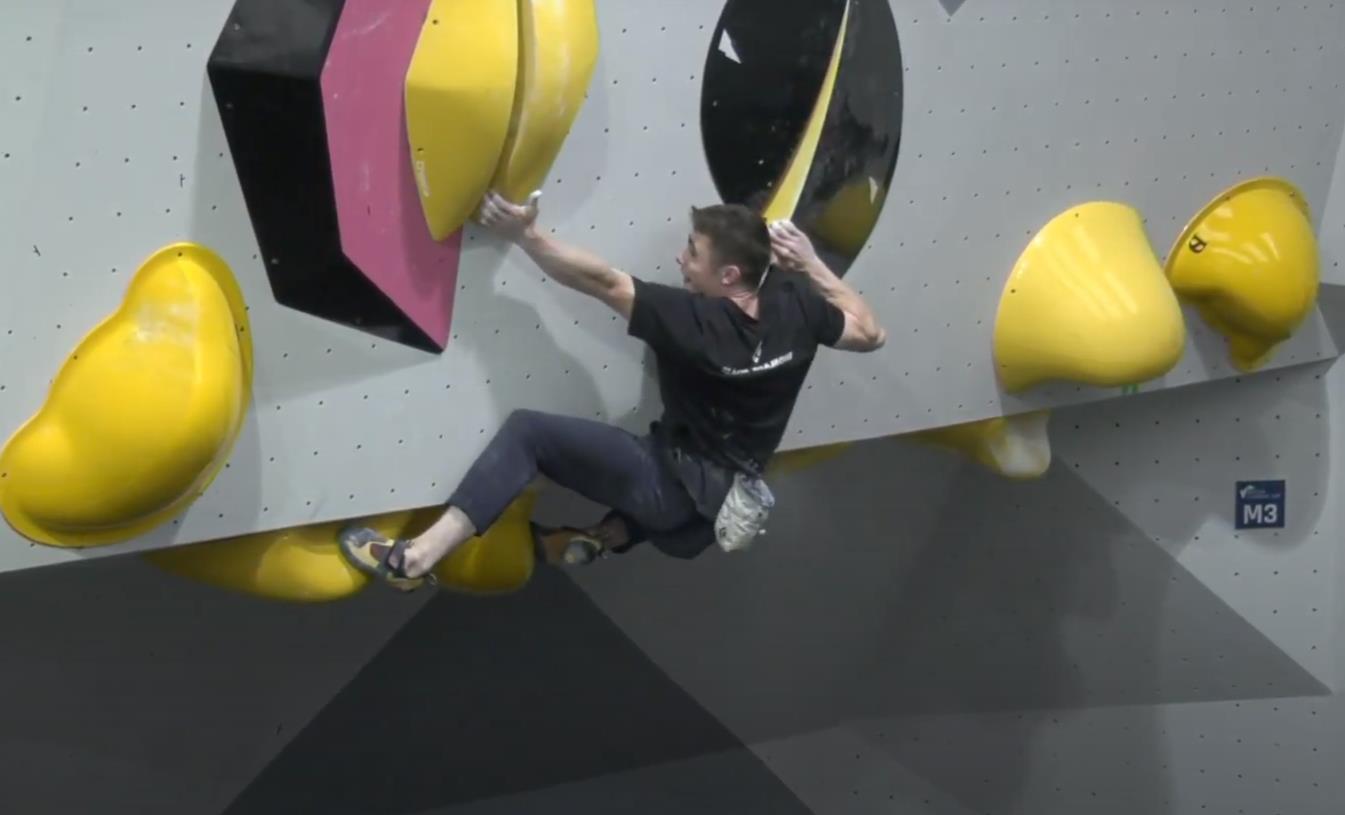 Holly Toothill flashed the first two blocs giving herself a solid lead in the Women’s event. In the Men’s event, things remained very tight. All six competitors had topped both blocs; only the number of attempts separated the entire field. At the half-way stage, Jim Pope and Louis Parkinson were joint top having flashed one bloc and done the second on their second attempt; Max Milne and Matt Cousins were in joint 3rd just a single point behind whilst Hamis McArthur and Kieran Forrest were just two points lower!

W3, a vert wall with a plethora of the new dual texture moon-shaped volume, proved divisive. Holly Toothill got a top and, with that, she cementing her already commanding lead into an unassailable position out in front. The overhanging madness of M3 saw a number of flashes and hence didn’t separate the men’s field; Jim Pope and Louis Parkinson remaining in joint first place with Max Milne and Matt Cousins in joint 3rd just a single point behind.

W4 was set to involve a full-on dyno which Holly Toothill, Robin Cassey, Thea Cameron and Louise Flockhart all duly dispatched whilst Gwyneth Uttley was able to climb it statically. Holly was the only women to top all the blocs and finished with a very impressive 432 score; Robin Cassey finished in 2nd with 270 points just a single point ahead of Thea Cameron (269pts) in 3rd. Frustratingly for Thea, had it not been for a false start on an early bloc she we would have also finished on 270 points and taken 2nd place on countback.

M4 involved yet more jamming and provided the nail-biting final decisive bloc to the men’s competition. Jim Pope, Max Milne and Kierran Forrest all held it together nicely and flashed M4. That nicely separated the men’s field with Jim Pope finishing on 439 just a single point off a perfect score of 440. Max Milne, having taken more attempts on M1 than Jim, finished in 2nd place on 438 points and Louis Parkinson came in 3rd on 437 points.

Watch a video of the final round below...