Taking full advantage of a fresh if cool weather snap, Tom Randall reports that he’s just freed the old aid pitch on Schwarzeschild Radius in the Great Cave at Blackers Hole at Swanage. 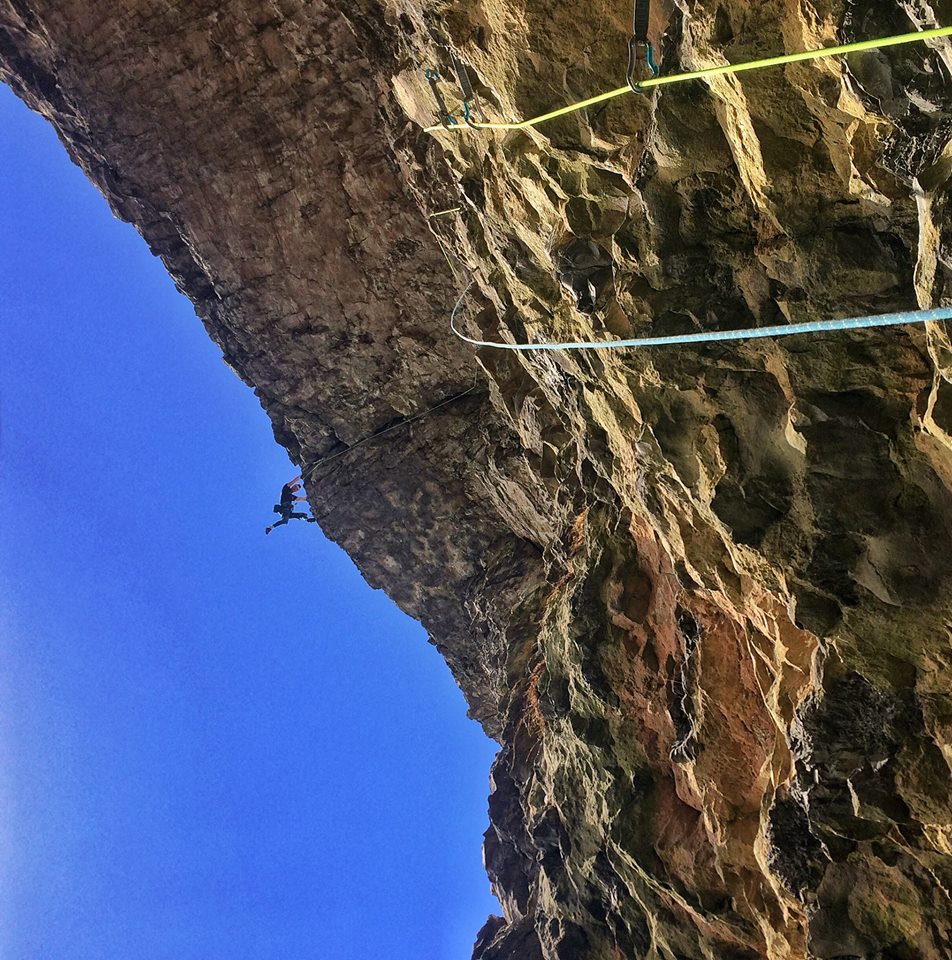 Tom Randall on the lip of Schwarzeschild Radius in Blackers Hole

Blackers Hole is well-known for having some of the best and most outrageous challenges on the whole of the south coast of Britain. Following an early foray into the more reasonable areas Arni Strapcans and team came away with Polaris (E5 6a) way back in 1978. Martin Crocker got involved in the action producing, amongst other routes, Enter the Void (E6 6b) in 1994 but it was Pete Oxley that really took up the running producing a series of monster pitches including Laughing Arthur (E8 6b) in 1988 and Infinite Gravity (F8a+) in 1992. Fast forward to 2010 and Tom Randall and Bob Hickish climbed Forever Laughing (F8a) together as their opening gambit after which Hickish went on to do the hardest route in the area, Endeavour (F8c), in 2011.

Well, Tom Randall is back on the scene again with a free ascent of Pete Oxley’s Schwarzeschild Radius – a line that previously went at F7c+/A1. Posting on-line Tom said; "Kinda felt like being in Utah again as it's a pretty big roof crack! Mega exciting position and adventurous cave... probably made all the better by sharing it with some other psyched people. Cheers Ian & Rob." Tom added  a comment re the grade too; "It's about E8 as the physical difficulty is 8a+."

Perhaps not surprisingly, given Tom’s background in crack climbing, the crucial pitch tackled a monster roof crack. Tom had tried this pitch before but it hadn’t gone exactly according to plan when he got his knee stuck. Tom set the scene for CLIMBER; “Yeah the leg getting stuck on a previous trip was pretty stressful. The weird thing was that I had someone belaying me on one end and Mike Hutton taking photographs at the lip of the roof and no one could do anything! I think they thought it was fairly amusing for the first couple of minutes, but then when I really couldn't get unstuck it was fairly stressful. In the end some self-induced ankle spraining was the way forward. Bit unpleasant, but worth it to not have some kind of full on rescue scenario.”

Having just returned from Utah where Tom and Pete put up a number of absolute monster roof pitches including Millennium Arch (5.14) – click here for those reports – Tom was obviously keen to get the Blackers Hole project closed out. Tom has described the climbing for CLIMBER; “The line follows the first pitch of Schwarzeschild Radius (which is a bolted 7c+) into the unclimbed roof crack above. This is F7c+ on its own. I climbed the top section on trad gear, placing it on the lead. The roof is absolutely fantastic adventure climbing.... big exposure above the sea, around 8m of horizontal climbing through a splitter crack. What's not to like?!”

Knowing Tom, we thought he’d have his eye on other stuff down there too. Sure enough he confirmed that straight away; “One or two more major projects for me left down there. I've got one very "optimistic" trad line which is in the E10 and beyond range and another which is quite a bit more doable, but I'm a bit too scared to do it at the moment. All good though, it just takes a bit of courage and perseverance to get stuck in down there as no single day in the Blackers Hole ever feels like a cruise. It's kinda committing just climbing in there.”

Watch this space – as they say. Meanwhile Tom has named his latest offering Supernova.