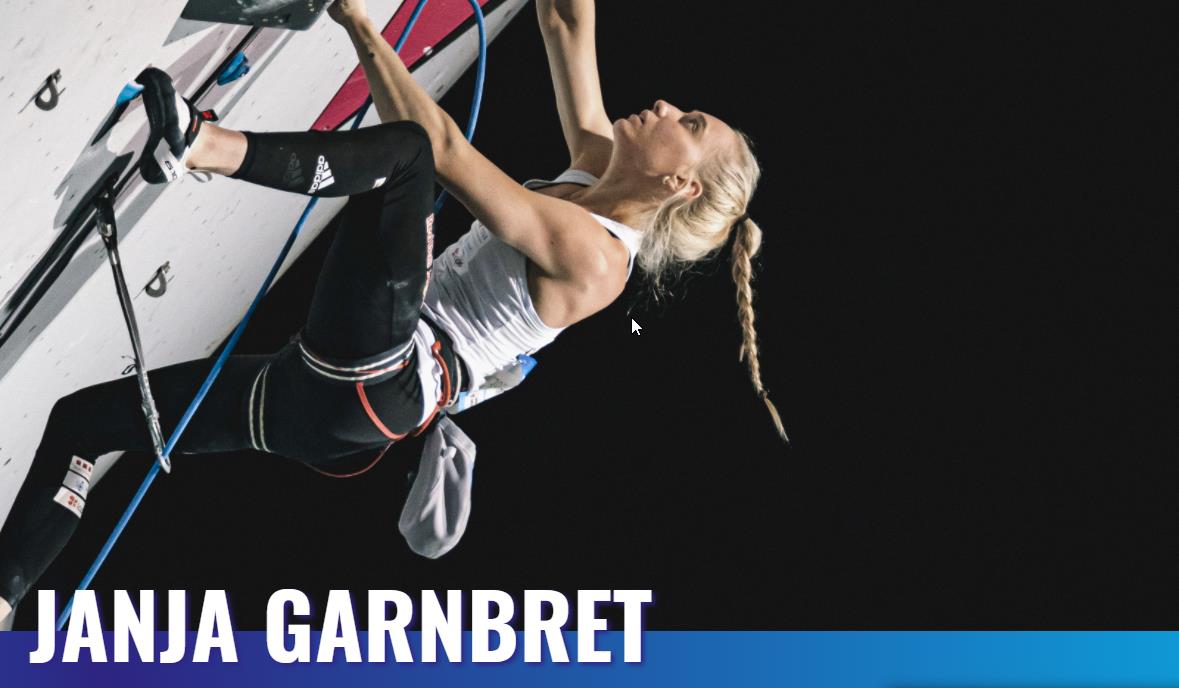 In another dramatic and tense final’s day, the women’s combined sport climbing event, unlike the men’s yesterday, went largely to form with the pre-event favourite Janja Garnbret taking the gold. Miho Nonaka just managed to edge ahead of her teammate Akiyo Noguchi but the Team Japanese silver and bronze was a fantastic result for the host nation climbers. Brooke Raboutou, another pre-event favourite, might well have done better but a somewhat unexpected poor lead performance meant she finished lead in 6th and overall in 5th one place behind the speed specialist who finished in 4th thanks to her sterling work in the speed which she won with a new world record. Here are the details...

Aleksandra Miroslaw had been threatening something very big in the speed during the Olympics and on the biggest stage possible, in her last run of the speed event, she fully committed and delivered a new World Record of 6.84secs shaving 12/100ths of a second off the previous record. Miroslaw’s was a faultless performance under pressure from Anouck Jaubert, the French speed specialist; Jaubert finished the speed in second with a run of 8.84 secs having slipped early in the race. The two Japanese climbers, Miho Nonaka and Akiyo Noguchi, went head-to-head in the small final; Nonaka edged ahead with 7.99secs to take 3rd place forcing Noguchi who finished with 8.42secs down into 4th. That result was to prove highly significant for the Japanese climbers later in the day! 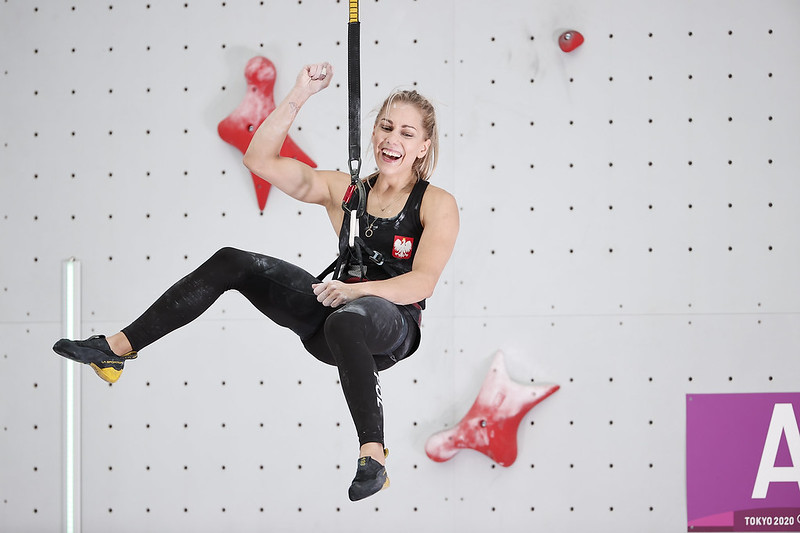 Garnbret, having had a slip in her earlier run, held her final run together to record 7.81secs; understandably she was delighted by breaking under 8secs barrier in competition to record her best ever time on the speed wall. Fifth place finish for Garnbret kept her in contention in the midst of her closest competitors for the overall title; slightly behind both Miho Nonaka and Akiyo Noguchi but crucially ahead of Jessica Pilz and Brooke Raboutou who finished in 6th and 7th respectively. Chaehyun Seo finished in 8th place but recorded 9.85secs – her fastest time ever on a speed wall.

W1, a coordination problem with a complex start, said by the setters to be one of the harder problems, forced Garnbret to take three attempts! Brooke Raboutou got her hands on the final hold but failed unfortunately to control it so the rankings for Raboutou et al came down to attempts to the zone. Pilz got the zone on her 7th attempt, Noguchi and Raboutou got the zone on their 5th attempts but remarkably speed climbing specialist Jaubert got it on her 2nd attempt!

Said to be a test of mental strength and flexibility, W2 was another stern test. Pilz, Nonaka, Noguchi and Raboutou all got the zone; Nonaka fell within shooting distance of the final hold running out of time. Garnbret delivered a masterclass and flashed it but taking fully two minutes to unlock the contorted groove before finally unleashing herself to dyno for the top which she duly held. Garnbret’s second top meant she had won the boulder round with one bloc still to go!! She could have finished her boulder campaign right there but that wasn’t really Garnbret’s style!

Going into the lead final Garnbret was ahead of Miroslaw and Nonaka in the overall standings. When Raboutou fell off unexpectedly low at move 20+ it opened the gates for the others. Noguchi climbed powerfully and confidently firmly keeping the ‘pedal to the metal’ before falling off at 28+ having skipped a clip.

Garnbret was next out and was typically dynamic but studied taking multiple rests as she climbed to the headwall. With time running down she finally fell at 37+ having established a 10 move high-point. She’d not topped out but surely that would be enough to win the lead section and the overall combined?

With all the skills of a former lead World Champion, Jessica Pilz climbed purposefully before finally falling at 34+ just below Garnbret. Finally, Chaehyun Seo came out. If she climbed past Garnbret’s 37+ high point she would take the bronze. Sadly, Seo fell off pat the first crux at 34. Garnbret had the win in the lead, Pilz second and Noguchi third.

As widely expected Janja Garnbret had won both boulder and lead and therefore had climbed her way into the record books as the first ever women’s Olympic Sport Climbing gold medallist. In a near-dream finish for Team Japan Miho Nonaka and Akiyo Noguchi took silver and bronze medals – an impressive performance, especially for the retiring Noguchi.

Aleksandra Miroslaw finished in 4th with Brooke Raboutou in 5th, Anouck Jaubert in 6th, Jessica Pilz in 7th and Chaehyun Seo in 8th. 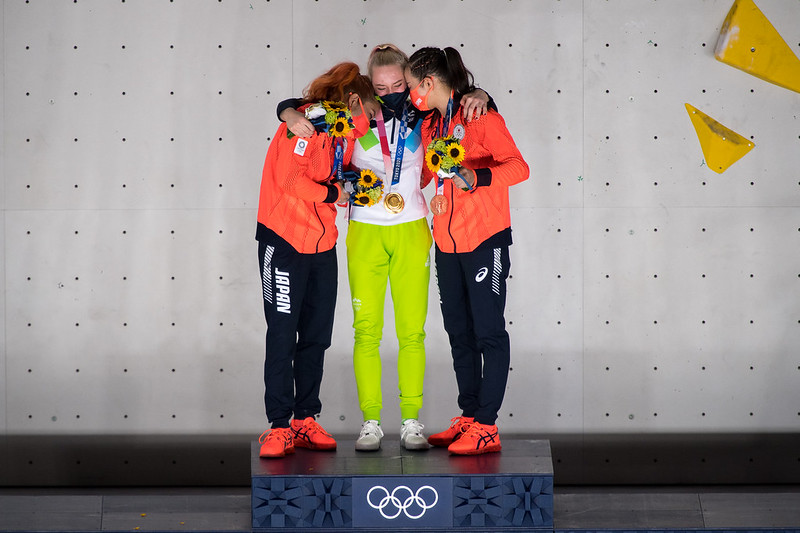