Tim Emmett talks about going big (and dry) for The Path

Following our earlier report that Tim Emmett had repeated The Path at Lake Louise, CLIMBER have been in touch with Tim about his ascent and we can bring you more details. 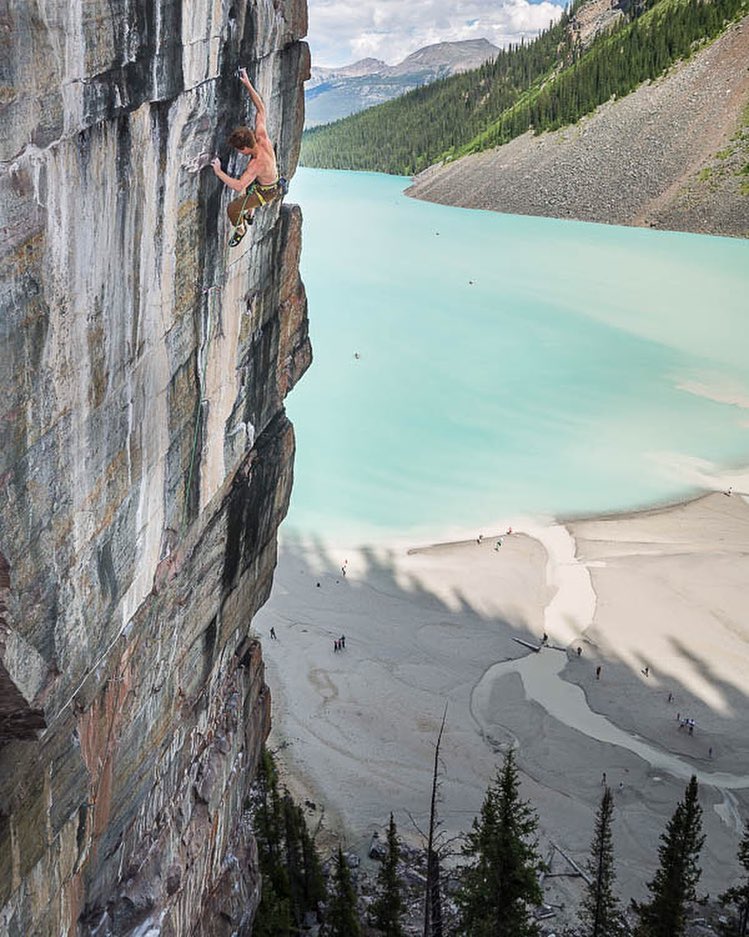 So what attracted you to The Path?

Ever since I saw Sonnie Trotter do the first ascent I thought it looked utterly amazing and in such as beautiful setting. The rock is really, really good there and I love doing routes that have got an element of danger or excitement in them and it looked as though this one had long run-outs and exciting climbing. It’s a long pitch; it’s really steep and really suits my style.

How long did it take you?

It took me eight days of visiting to get the route. You can only really try it once on lead in a day as it’s in the sun in the morning and then it gets really sweaty in the evening. The golden hour, actually it’s two hours between 2 and 4pm that are good for conditions, so I’d go in, warm-up and then go for the lead. Then that would be it and you’d have to take the gear out and go home.

How did you approach the route?

As I’ve said, I stopped drinking – it was nearly 90 days in the end – and that really helped with my motivation, my training and my focus. The other big reason for stopping drinking was so I don't put on weight while I was in the prairies. Psychologically, I like to try things which are really hard and see what happens. In the past I’ve always put limitations on what I think I can do and I’ve got rid of the now and just go and try stuff and then I work out how I get to the level to do it. Trying The Path for me is a classic example of that.

Mentally, how did you approach it?

You’re not gonna die on the route if you fall off – except perhaps at the top of the 5.11 [Wicked Gravity is 5.11 when done, as usual, on bolts however doing it on trad involves a long run-out, albeit on relatively easy ground.] I’d stay as relaxed as possible and then focus on each boulder problem in turn and then go onto the next one. I find it’s all about staying calm and relaxed and keeping my breathing under control and then really going for it.

How did it compare to other hard routes you’ve done?

In terms of quality, the only trad route that I can think of that is has good as The Path is Meshuga in the Peak; that has an immaculate line, incredible rock and really pure. So on The Path, the way the climbing goes together is unbelievable, it’s totally world class and an absolute joy to climb. The route actually get harder the higher you go up. It’s much harder that Muy Caliente, but less dangerous – you’re not climbing F7c+/8a in a deck-out situation.

And grade-wise, how did it feel?

It’s really difficult for me to say about grades to be honest. I’m climbing way better now than I was. When I did Muy Caliente I was climbing F8b and that’s F8a+/b and now I’m climbing F8c and The Path is F8b+. It feels the same to be honest but it clearly isn’t. Another route which I’ve done which is kinda similar is Nightmayer on The Cromlech; it’s about the same length and at the time that I did that I thought it was desperate but it is about F7c+ with run-out gear whereas The Path is F8b+ with run-out gear so it really depends on your climbing ability at the time.

Did quit drinking really give you the edge?

I think it did yes – because instead of have a beer or a glass of wine or two I’d go training, circuits or do activity. I think cumulatively over a three month period it got me into a really good shape physically, but also from a mental aspect I felt really, really sharp for not drinking at all. I feel that trying to climb the hardest route of my career it was really important to feel physically and mentally in really good condition.

Are you chilling for a while or getting straight on with the next project?

The thing about The Path, it’s a real stepping stone for me. My main goal for me this summer is to climb Superman which is F8c+ so The Path is a really good warm-up as it’s the same style of climbing but a bit easier. I had a little celebration with the family and have a few drinks and then I’m back on it again until I’ve done Superman.

And has doing The Path given you any take-home points?

One of the things I’ve learnt is that when you set yourself limits – and it does really matter who you are - there are ways to break through those limits by changing things. For example, by changing your diet, changing the way you think, changing how much drinking and partying you’re doing. So if you focus on each one of these the cumulative effect is absolute huge.

So thanks to Tim for sharing his thoughts. Stay in touch with Tim via his athlete page on FB here…